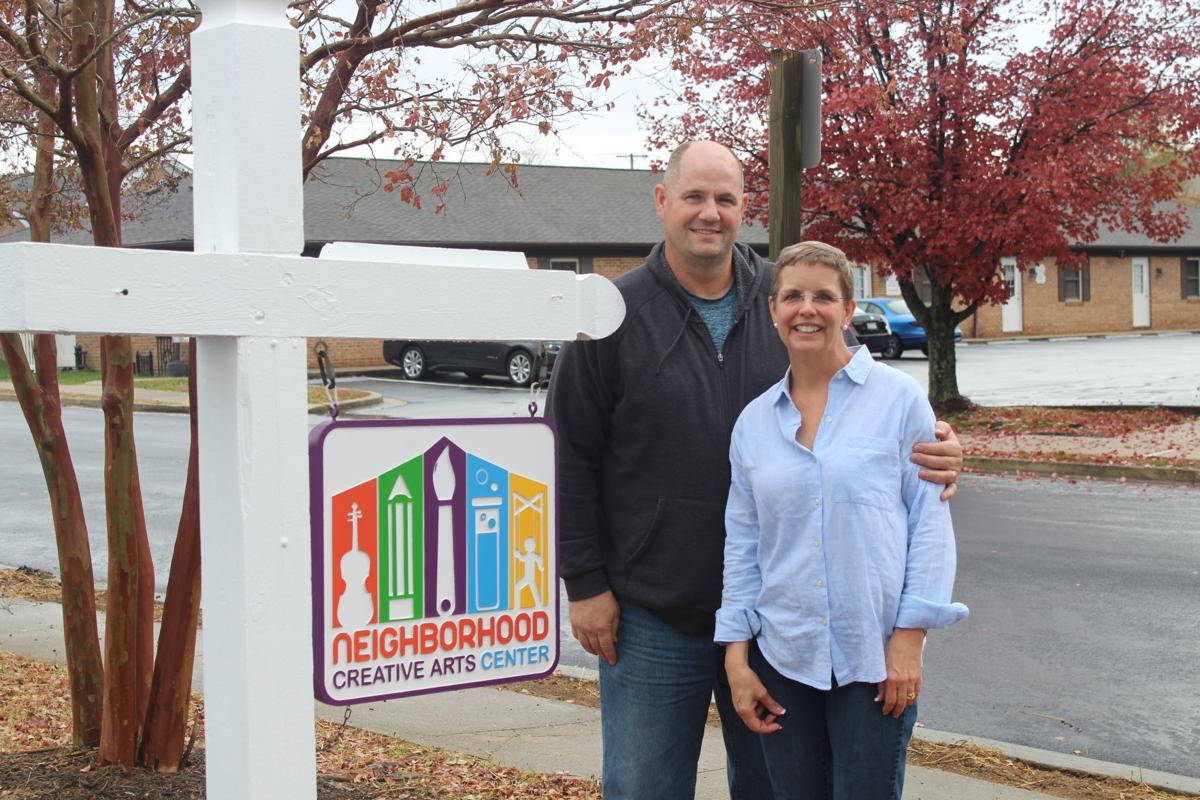 Philip and Georgia Bonney of La Plata are the founders of the Neighborhood Creative Arts Center. 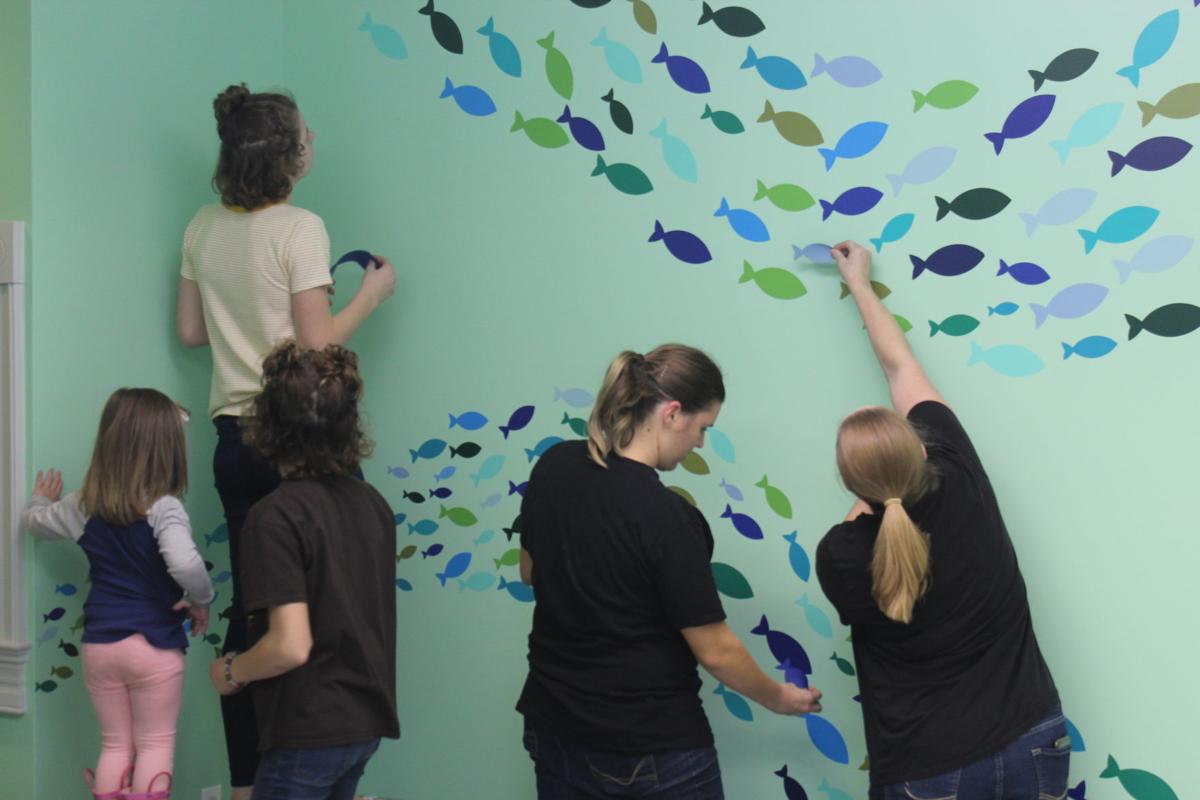 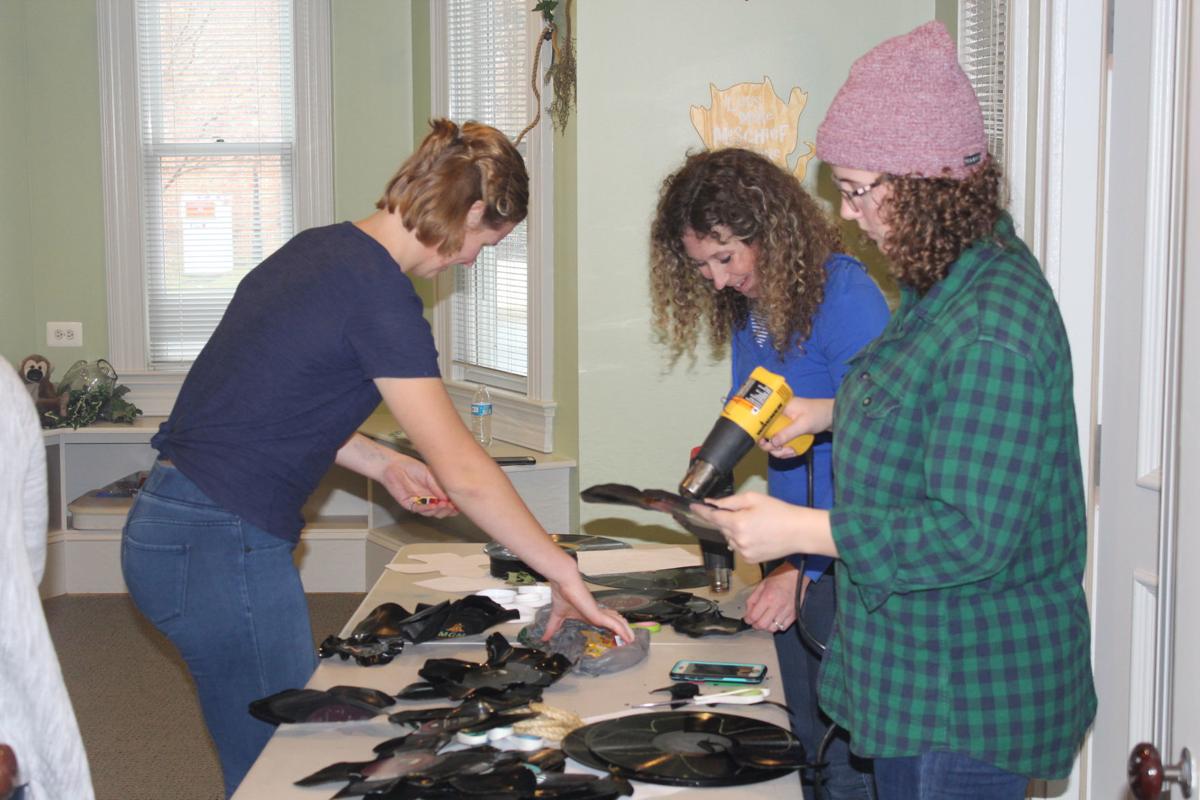 Teachers at the Neighborhood Creative Arts Center create crafts from old records for the music room.

Philip and Georgia Bonney of La Plata are the founders of the Neighborhood Creative Arts Center.

Teachers at the Neighborhood Creative Arts Center create crafts from old records for the music room.

There is no doubt the fine arts hold a special place in many people’s lives and as an expressive, creative outlet, can benefit mental and emotional health. The issue is finding a place where anyone who holds a distinct passion can express themselves freely and creatively while encouraging others to do the same.

That aims to be the purpose of the Neighborhood Creative Arts Center, a nonprofit, all-ages community arts and academic center that opened Nov. 30 in La Plata.

The conception of the idea grew from Executive Director Georgia Bonney teaching piano to children from her home, gradually increasing her student roster and garnering requests for new subjects. Once Bonney’s home could no longer support the number of students, she expanded to the current venue and established the NCAC.

The center offers classes ranging from ballroom dance to sewing, quilting, musical theater, art, playwriting and drama. This is built upon the success of the previously established instrumental and vocal music program, which will take place at the venue as well. In addition, the center will serve as a host for academic events such as Mock Trial, Model United Nations and History Day fairs, along with other programs for homeschoolers and after-schoolers.

Bonney, who has always had a passion for the arts, said she initially drew inspiration from the St. Louis City Museum, picturing a place where children would only be limited by their imaginations. This dream became a reality shortly thereafter with the establishment of the program from her home.

“I think it’s really important for our psyche, our emotional well-being, that we slow down and take the time to work through something and work for a long term goal,” Bonney said. “Everyone has a divine, creative spark within them, a desire to create something from nothing; we need to pay attention to that creative spark so it doesn’t die within us.”

Bonney stated that she chose the house because of the homey feeling, and is already establishing and renovating rooms to be dedicated to different subjects. Bonney structured the hours to be accommodating to parents and other adults that work during the daytime, so a creative outlet could be reached even on a tight schedule.

“I just want for when people come here that they feel peace, feel joy and they feel a desire to reach out and welcome others no matter where they are in their path,” Bonney said. “I think in the face of everything in the news and the things that tear our communities apart, this is something that’s needed in our community, something that people of every race of every nation can come together and feel the joy of creating something new.”

Bonney is not without support in this endeavor, most notably her husband Philip, who teaches brass and guitar at the center.

Philip said one of their biggest challenges was finding the right location, as a retail storefront would not have been an accurate representation of what is meant to be accomplished at the center.

Philip believes that the current venue will facilitate adult participation better than their home ever could. Adults need a creative outlet just as much if not more than children do; the center aims to capitalize on this need for the community.

“I think there are a lot of adults that may have had a desire to learn an instrument or to paint or to learn a hobby that didn’t have that opportunity and to meet with others that have that same desire,” Philip Bonney said. “A lot of times now we have these cell phones and technology and everything is right there, but it’s just with your thumbs and the creative process, whether that’s musical or art or whatever that may be, I think that will help people.”

Philip Bonney credits his wife with finding their current teachers and recognizing the passion they have for the respective subjects. As the center opens, the entire staff have their minds on expansion of the subjects in the community and additional staff to satiate the creative needs of the public.

“It will be a place where people can come and develop their talents and also share their talents, not in a competitive way but in an amicable way, an encouraging way, and create rather than consume,” Philip Bonney said. “The most critical resources are people, and the right people. You can have instruments, you can have all the materials, but it’s the people and the right atmosphere that will make this successful.”

The Bonneys are already equipped with a talented staff that share their passion for the arts. Brittany Roring, who has a degree in elementary education, joined the center after teaching theater for the past eight years.

Roring said she chose to share her love of theater at the center because of the high levels of professionalism and sophistication the Bonneys exude. Describing her ownership-based approach to her theater classes, Roring said it leads to phenomenal results, not only in theater but in other subjects as well, when children are able to create for themselves.

Roring and the rest of the staff plan to share their abilities with the community and encourage others to take part in the creative process.

“My main goal is to help the kids build confidence in themselves and their own abilities. To understand what they are capable of if given the push in the right direction,” Roring said. “There’s a lot of opportunities and a lot of space here in the building, so if it could really get filled up I think it would bring the community together and have a place for kids to really grow and learn.”

Roring plans to build many theater set pieces out of cardboard, encouraging children to work together while at the same time accessing their artistic and theatrical sides.

Focusing on artistic side specifically is Lisa Wyant, an art teacher who has focused on the subject for about six years in different roles and classrooms. Wyant believes the arts develop more passion in life and add an important variable to children’s lives, many of whom are presently consumed with typical coursework and sports.

Wyant said the center is amazing and she wants to be part of it, after seeing what Georgia Bonney was able to do for the community in the past. Wyant plans to work with children to help them find what they are passionate about.

“I think it’s important for them to kind of find their own creativity and light their own passion,” Wyant said. “I want to give them some inspiration and teach them some things but I think once they catch what they enjoy then they just develop naturally.”

Wyant believes the center will thrive into the future through active participation from the community.

“Anything that they know or that they enjoy doing share that, teach a class, even just a small mini workshop just to bring that to the community,” Wyant said. “The sense of community just through something good, we need more of that. I think that will be good for people’s lives.”

A message that is clearly shared with the rest of those involved in the center. Philip Bonney concluded by saying his goal is for it to continue far into the future.

“It’s going to be an interesting journey here,” Philip Bonney said. “I think that it will be something that will outlast those who started it, in 20 to 30 years to still be thriving.”