People await their turn at one of Odyssey’s mobile escape rooms.

One of Odyssey’s mobile escape rooms is set up for display before the crowd arrives. 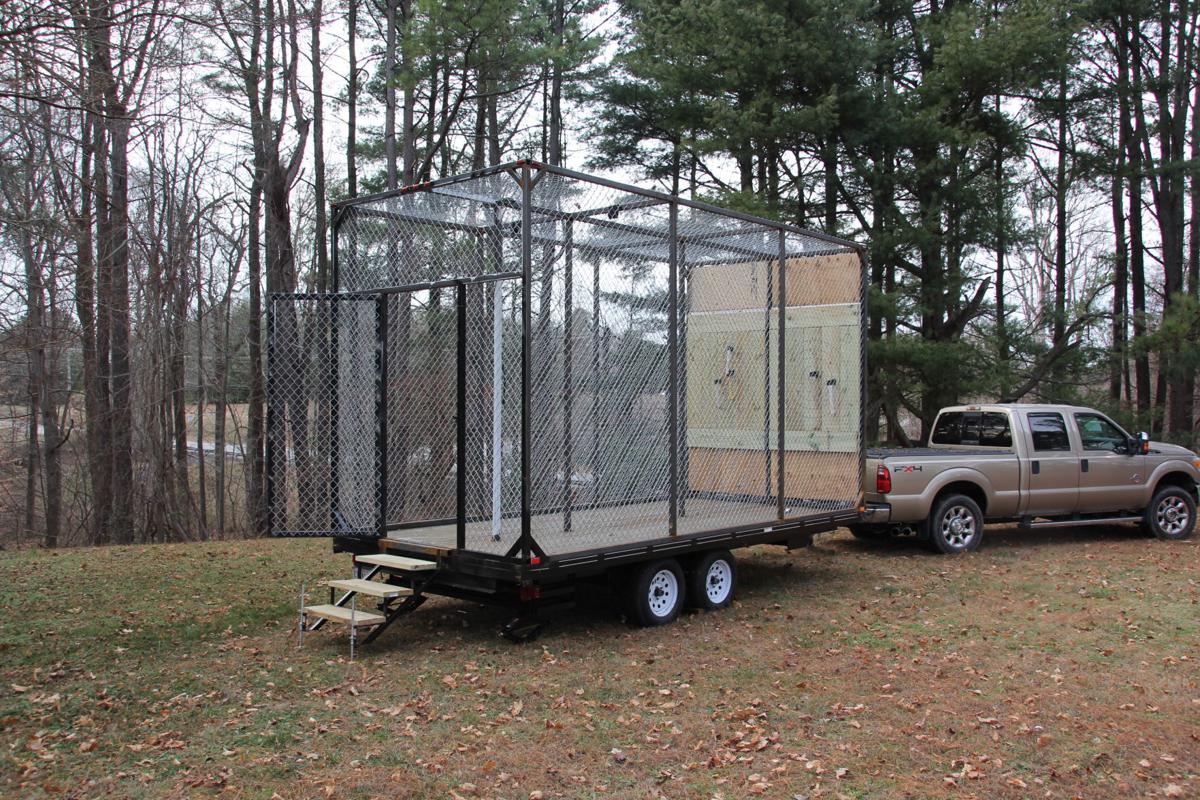 A mobile axe throwing booth is a a new source of entertainment for Odyssey.

People await their turn at one of Odyssey’s mobile escape rooms.

One of Odyssey’s mobile escape rooms is set up for display before the crowd arrives.

A mobile axe throwing booth is a a new source of entertainment for Odyssey.

You can go in, but it can be a bit tricky to get out. And that’s exactly the point of a mobile business in Southern Maryland.

Ryan D’Ambrosio and Matt Handrick, co-founders of Odyssey Mobile Adventures, are operating mobile escape rooms and axe throwing booths to provide entertainment at events in the Southern Maryland region. The pair operate out of Huntingtown and have enthralled crowds at weddings, birthday parties, anniversaries and “everything in between,” Handrick said.

The idea for the business was conceptualized by the two in October 2016 and construction of the first unit took about six months. The two men worked the business part time until making it their full-time commitment in February 2018.

“It is a lot of hard work, but is a hell of a lot of fun,” D’Ambrosio said of designing and building the escape rooms.

“We got started with this because we realized there were no other mobile escape rooms in this area,” Handrick said. “With that comes all the growth challenges, so we ask, ‘How do we meet the demand that people are trying to put on us?’ It can be a challenge for sure.”

Odyssey brings a different atmosphere than one found at a stationary escape room where the room itself is typically the hour-long sole source of entertainment, Handrick said. The mobile escape room provides additional entertainment to a main event with games that range from 5 to 15 minutes in order to satiate the needs of a large crowd. The rooms are 8.5 by 20 feet and can host two to six players at a time, according to the company website.

“We can get a lot more people through our game in the same period of time,” Handrick said. “People like the fact that they don’t have to go anywhere. We can pull up to them, right outside their house, festival, fair, whatever.”

Weddings have been a relatively new venture for the business, as Handrick said that he and D’Ambrosio never conceptualized working at them upon forming the business. However, as time went on and they continued to expand, they realized the entertainment they provide is suited for such a celebration.

“We have 100 to 150 people … everyone wants something new at their wedding, something different,” Handrick said. “People just had a massive response, they love it, they can’t get enough of it and that’s the centerpiece of their wedding for the most part.”

While stationary escape rooms are typically the sole source of entertainment and not an addition to an event, they still attract their unique customer base. Mike Ryan, who manages Escape the Room D.C. in Penn Quarter, said that people utilize their entertainment for team building events, proposal parties and gender reveal parties, among other celebrations.

“We have more puzzles and gags than a mobile escape room would be able to have,” Ryan said. “The majority of gags here would be more complex and of higher production value.”

Ryan said that he believes mobile and stationary escape rooms can coexist, as the Escape the Room company is experimenting with their own mobile rooms. However, Ryan said that there are far less logistics to sort through when it comes to a stationary room, as time, location, set up time and property have to be accounted for with mobile rooms.

“Maybe for special events, sure, I think it is a great idea,” Ryan said of mobile escape rooms.

D’Ambrosio noted challenges in building the rooms, including space constraints and durability of props since the rooms see a high usage rate. He said that “every minute counts” at an event and they are tasked with building a great game within tighter confines.

“You can have this elaborate puzzle and a great idea in theory, but it may not work well in a smaller space,” D’Ambrosio said. “One way we mitigate this is making the rooms very immersive and engaging so that you forget you are in a mobile escape room.”

Attempting to view the game from the perspective of a first-time player has proven to be a challenge, D’Ambrosio said. However, the games have an adjustable skill level that can adapt to different players and everyone gets to “enjoy the game at their own pace.”

D’Ambrosio explained that inside, players use props tied to sensors that are linked to a specific puzzle. The sensors feed information to a computer that makes decisions about the game and the computer gives players feedback through sounds and lighting. Players use feedback to try and solve the puzzle as the computer subtly hints in the right direction and counts down the time. Players escape once the puzzle is solved.

“Being able to see people enjoy themselves is great,” D’Ambrosio said. “Watching people come out of the room with smiles on their faces eagerly wanting to talk about the puzzle they figured out is rewarding.”

Past customers have responded positively to their experience with Odyssey. Laura Hennigan ordered the entertainment for her son’s wedding in May 2019 and said that they were provided an “amazing experience” for all ages.

“The crew that came out were so professional and did not interrupt one second of the wedding festivities going on,” Hennigan said in an email. “They [were] great to work with from beginning to end!”

Paul Sorent had Odyssey over for a New Year’s Eve party in 2018 and said “the whole experience was a breath of fresh air.” Sorent commended the staff and said that he would definitely be ordering their services again.

“The room was the best escape room we have been to, which blew us away because they’re mobile,” Sorent said. “What a personable group they have. Talked to my kids on their level and got them hyped up, and did the same thing with a group of 40-year-olds.”

While they tend to stay within Southern Maryland, Washington and Northern Virginia, the gentlemen have traveled as far north as New Jersey and as far south as Georgia for events, all depending on the demand and interest they receive.

“We’re just trying to figure out where our niche is going to go. People don’t realize ... that escape rooms and axe throwing booths exist in a mobile form,” Handrick said. “People don’t understand they can get that, and I just want to get that information out there.”