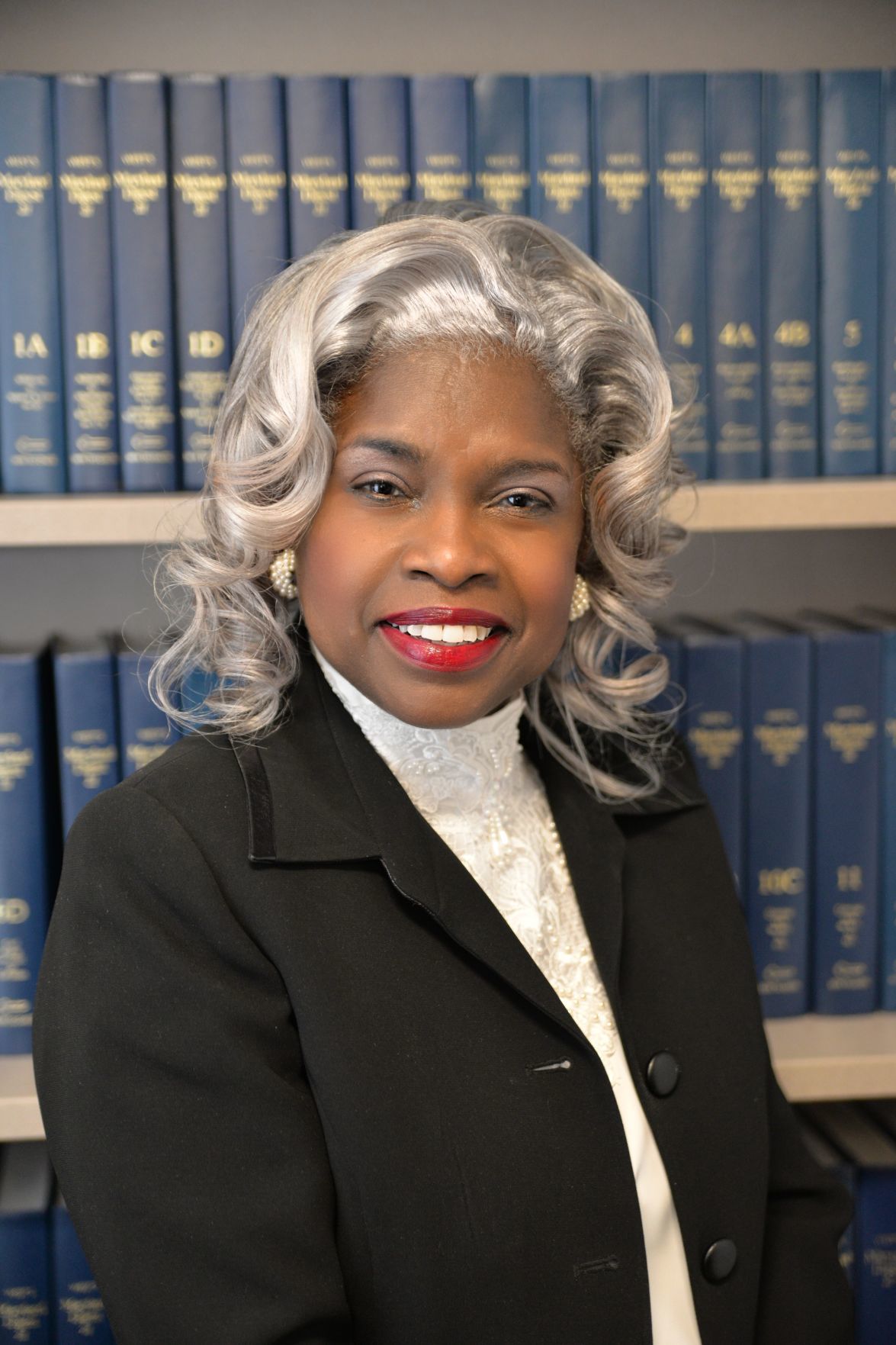 Adrienne M. Davis, owner of a Waldorf-based premier law firm Davis Law and Mediation LLC, has more than two decades of experience practicing law in Maryland. She is running for circuit court judge in Charles County. 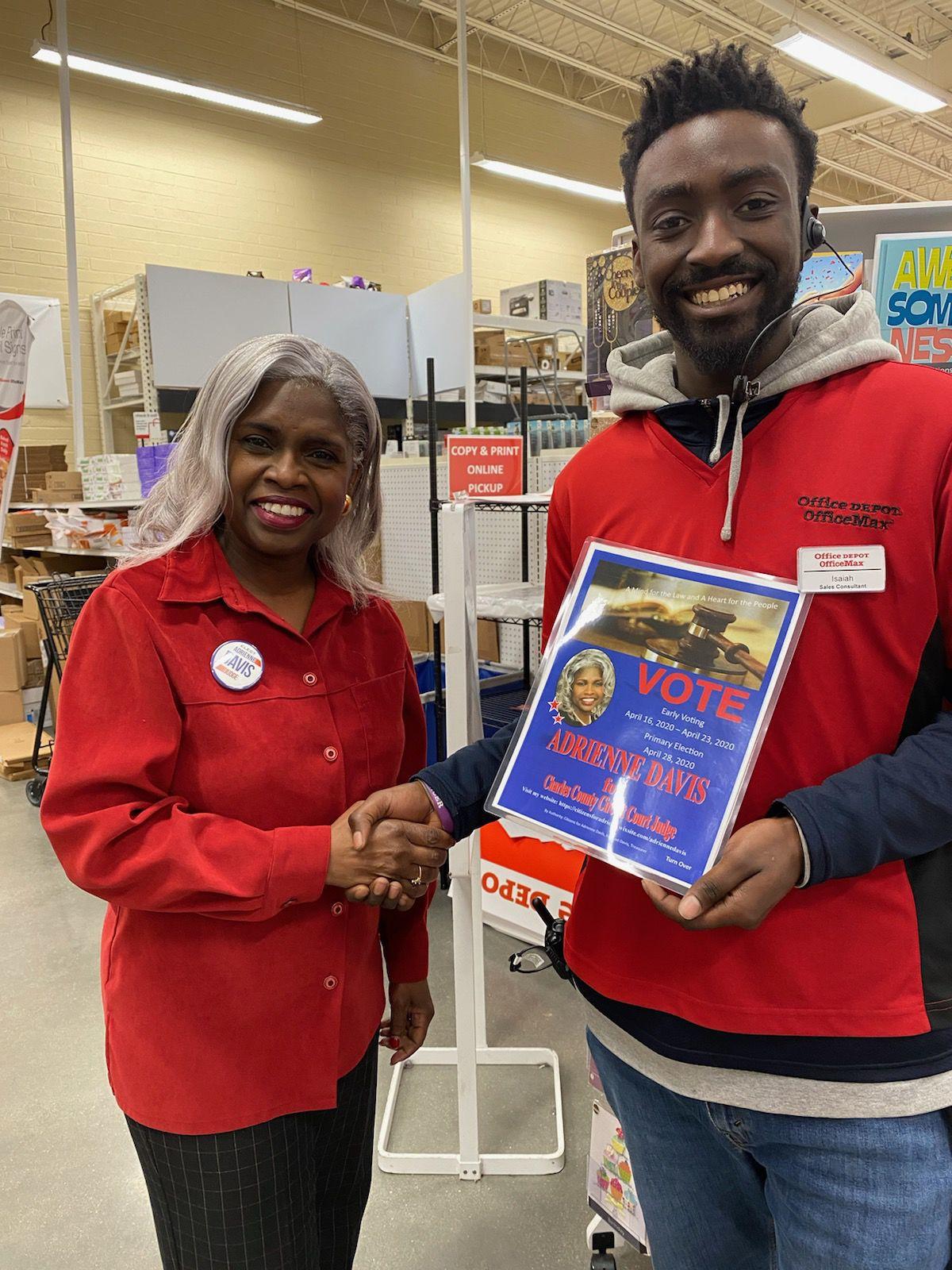 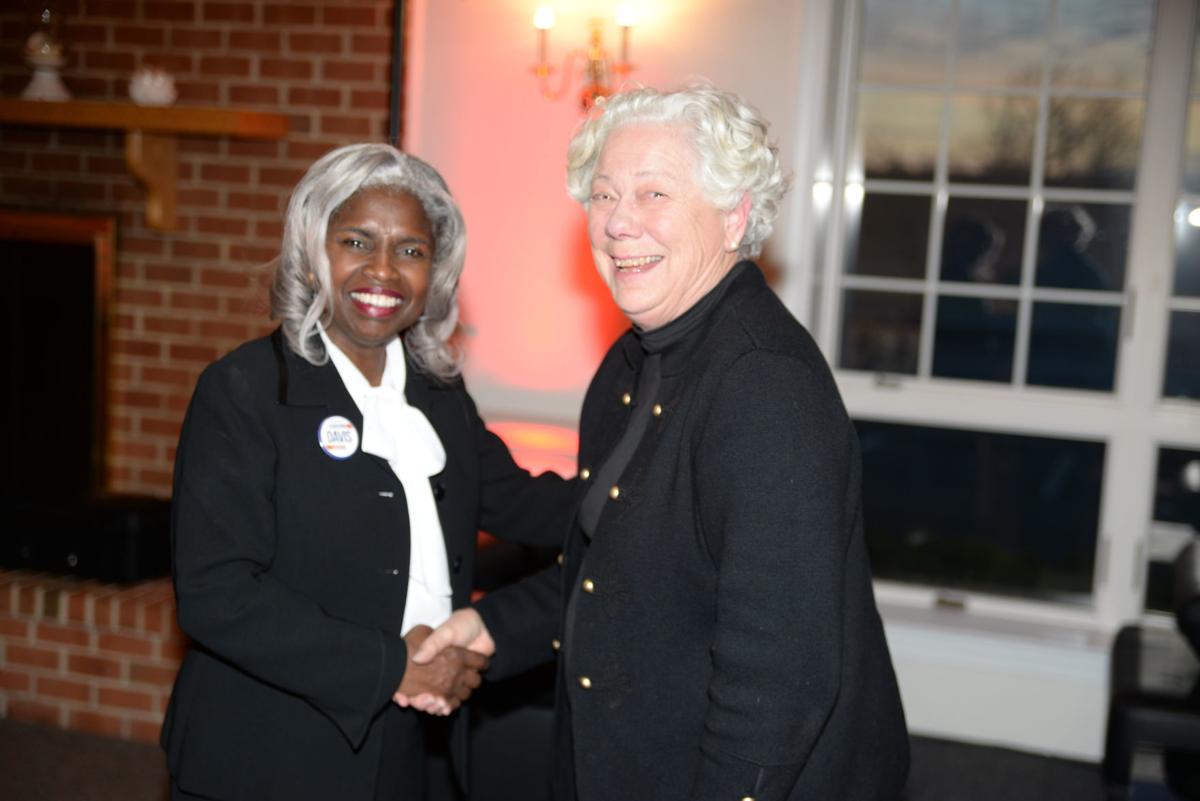 Adrienne Davis, left, spends a majority of her time in the Charles County community serving as a member of the circuit court’s alternative dispute resolution committee and Sagepoint Senior Living Services’ advisory committee. She is often called upon by the circuit court to mediate custody cases.

Adrienne M. Davis, owner of a Waldorf-based premier law firm Davis Law and Mediation LLC, has more than two decades of experience practicing law in Maryland. She is running for circuit court judge in Charles County.

Adrienne Davis, left, spends a majority of her time in the Charles County community serving as a member of the circuit court’s alternative dispute resolution committee and Sagepoint Senior Living Services’ advisory committee. She is often called upon by the circuit court to mediate custody cases.

“A mind for the law and a heart for the people” is the campaign theme of one of Charles County’s newest candidates for circuit court judge, a legal expert who is licensed to practice law in both Maryland and Washington, D.C.

Lawyer Adrienne M. Davis, owner of the Waldorf-based law firm Davis Law and Mediation LLC, has more than two decades of experience as a practitioner in criminal, civil, family, juvenile, administrative and appellate law, as well as with preparing wills, advance directives, contracts and powers of attorney. In addition to representing clients in criminal and delinquency cases, she currently serves as a settlement conference facilitator for the Charles County Circuit Court and law professor at Bowie State University.

“I’ve wanted to practice law since I was 9 or 10 years old. I never thought about doing anything else,” Davis told the Maryland Independent during an interview on Feb. 17. “I had wonderful parents who made sure that my dream was realized. It was people like Shirley Chisholm and other civil rights activists that really prompted me to serve in the legal arena.”

Davis, a Morgan State University alumnae who graduated cum laude and received a fellowship to attend Penn State University where she earned a master’s in public administration, gained extensive experience working as a law clerk for four different circuit court judges after graduating from the University of Baltimore School of Law. She then transitioned into working as an assistant state’s attorney in Prince George’s County where she was promoted twice, having prosecuted juveniles who committed misdemeanors and felonies as well as other individuals charged with attempted murder, rape, first-degree assault, burglary, robbery with a deadly weapon and possession/distribution of narcotics.

Having practiced alternative dispute resolution in both Charles and Prince George’s counties since 2004, Davis moved up the ranks by becoming an associate county attorney, senior legal counsel to the county executive’s office and working with agency and division heads.

“I have a passion for learning and practicing. I just enjoy that thoroughly,” Davis said. “From my experience, I didn’t always see an equal playing field with respect to the court process and how things work. So that’s why I really want to make sure that I have a strong sense of fairness on the bench.”

During her tenure working within the office of law for Prince George’s, Davis defended the county and its employees in cases that involved employment discrimination, alleged excessive forced against police officers and negligent actions. She also ensured compliance with Equal Employment Opportunity laws; tried cases before the county personnel board; as well as approved contracts, amendments, deeds, grant agreements and grant applications for form and legal sufficiency.

Davis’s impressive background also includes prosecuting correctional officers who were the subject of disciplinary actions; responding to document requests made pursuant to the Maryland Public Information Act; writing and filing briefs in cases that were appealed to the state court of special appeals; serving as legal counsel for the Prince George’s County Animal Control Commission; and trying cases before the employment panel of the human relations commission.

“Prior to actually practicing, I clerked for four circuit court judges and one was a county administrative judge. I think that was the beginning of my real legal career. I began to learn what the circuit court judge does,” said Davis, a criminal defense attorney who represents clients at both the district and circuit court level. “Quite frankly, I’ve loved every bit of my career in serving in every capacity. I’ve been a public servant most of my career and that was intentional.”

Davis spends a majority of her time in the Charles County community serving as a member on the circuit court’s alternative dispute resolution committee and Sagepoint Senior Living Services’ advisory committee. She is often called upon by the circuit court to mediate custody cases.

Davis has an active membership with the Charles County Bar Association, Maryland State Bar Association and the Maryland Program for Mediator Excellence. She has also served as a volunteer attorney with the Wills for Heroes program and provided services pro bono to elderly residents in Prince George’s County, helping them prepare wills, advance directives and powers of attorney.

Davis is most proud of her success rate with helping individuals resolve their differences in a safe, non-judgmental environment. She believes each client is unique and seeks to tailor her legal skills to their needs accordingly.

“I can’t say that I enjoy one thing over another because I really have a passion for being a legal advocate and serving people,” Davis emphasized. “As a public servant, you must be willing to listen carefully to what people are concerned about. You should strive to serve with a spirit of excellence in whatever capacity you’re called to do.”

As the sole proprietor of her private practice, Davis is grateful to keep her mind focused on the law represent as she strives to be fair, impartial and a very good listener, all of which she has been lauded for by several clients.

“Work hard, be a good communicator and be patient. Whatever you’re called to do, be the best at it that you can possibly be,” she said. “For me, it’s to serve the public and doing that with a lot of prayer first. I’m very thoughtful, analytical and very deliberate. I just try to take my time and make sure that I’m making a fair, thorough and accurate decision in the best way.”

Davis received an official citation from state Sen. Arthur Ellis (D-Charles) last September, in recognition of her dedication to serving the Charles County community as an accomplished attorney and founder of Davis Law and Mediation LLC.

“I want to give back in an excellent way,” Davis said. “I’m a sole practitioner. It’s not easy but it’s doable and I thank God that my reputation is very good. People have told me that they were very happy with the way I served them because I serve them with excellence.”

A former client, whose testimony appears on Davis’s private practice website, expressed appreciation with how Davis “was always readily available” to answer questions, “trustworthy, easy to talk to” and lended “a listening ear.” Other clients deemed her as a non-biased, compassionate and attentive professional who uses “wonderful tactics” to get others “to come to an understanding.”

Davis said her ultimate goal is to provide exemplary legal service to all as she strives to continue serving the public with a spirit of excellence.

“I came to know Adrienne Davis through that responsibility,” said Susan Gilhooly, a fellow attorney who befriended Davis when she worked for the state’s public defender office. “I highly recommend Mrs. Davis in her effort to be appointed or elected as a [circuit court] judge in Charles County. She has roots in the county and is a kind and effective attorney. She would be an excellent choice due to her experience as both a public defender and district attorney.”