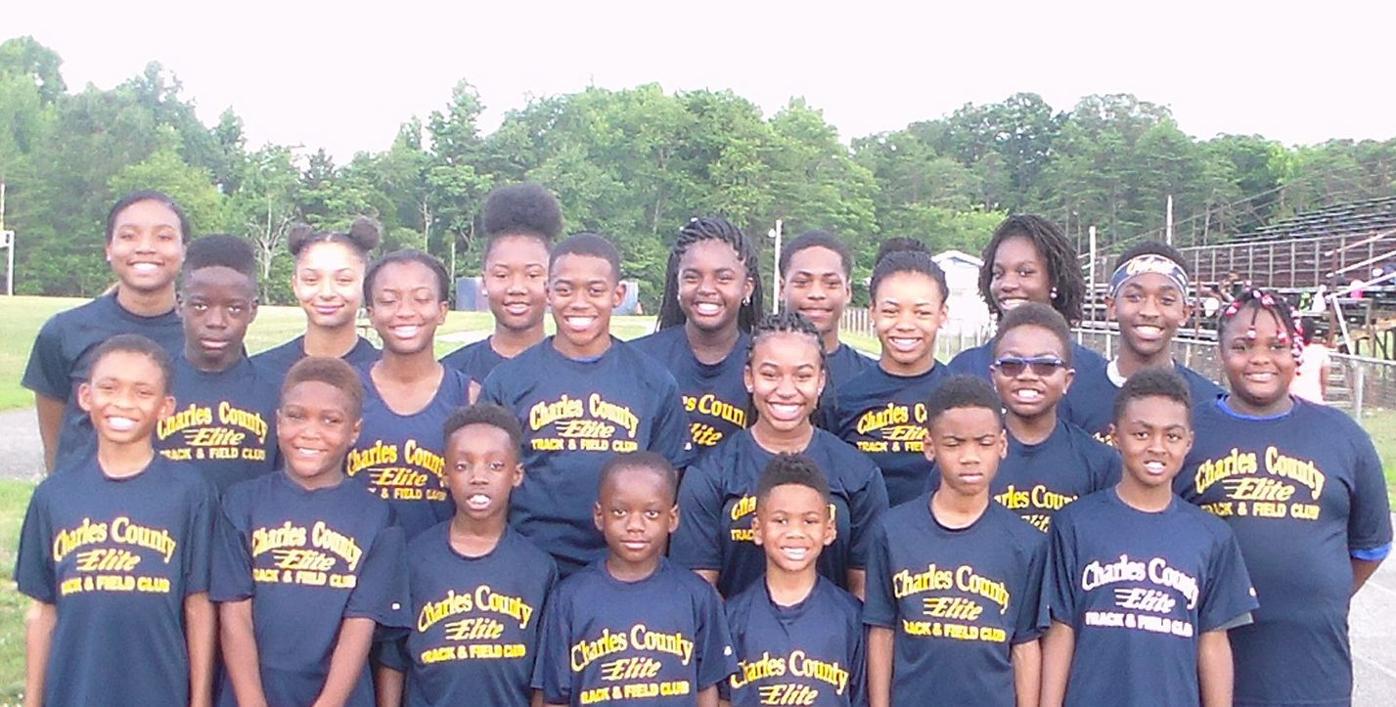 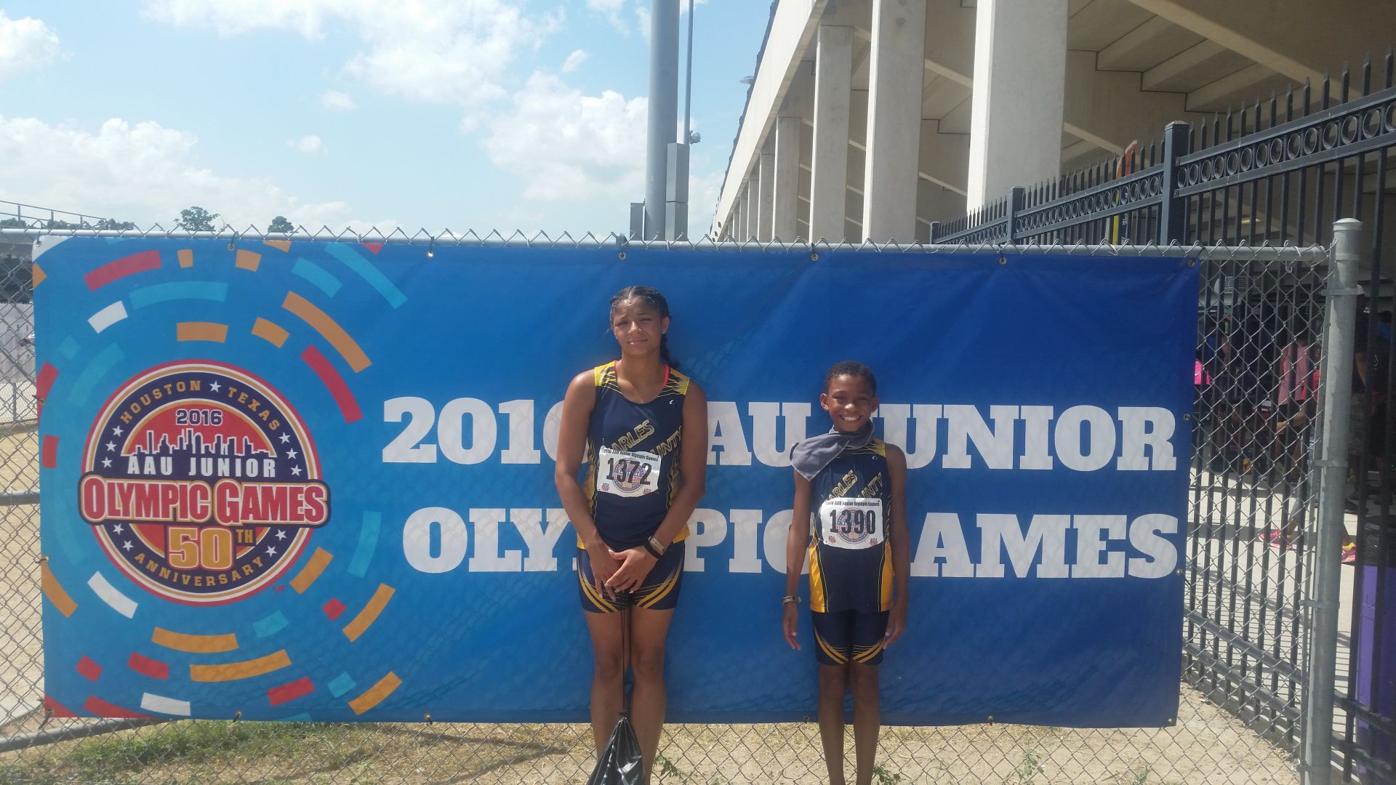 Waldorf Elite's Raven Kennedy, left, and teammate Christian Wilbon each competed in the 100- and 200-meter dashes at the Junior Olympic Games. 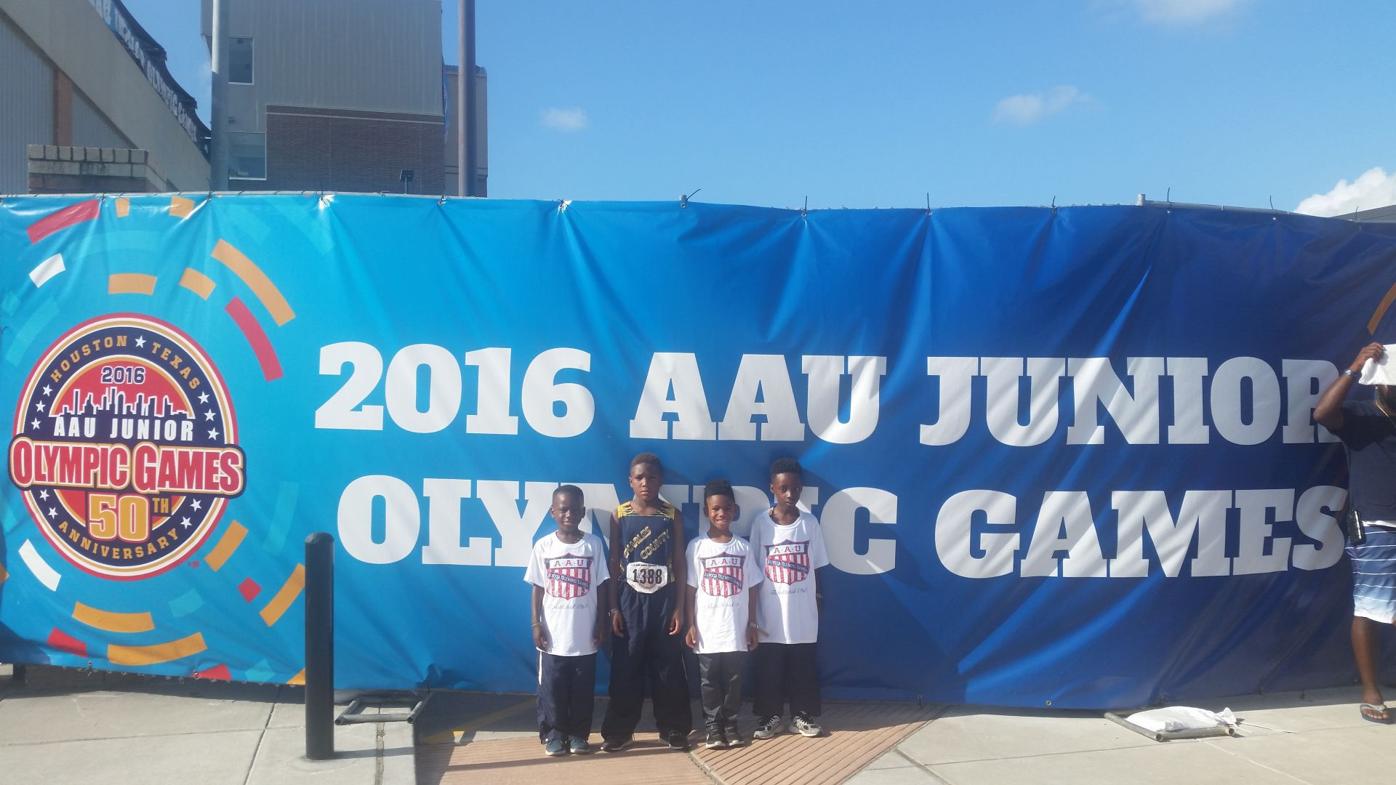 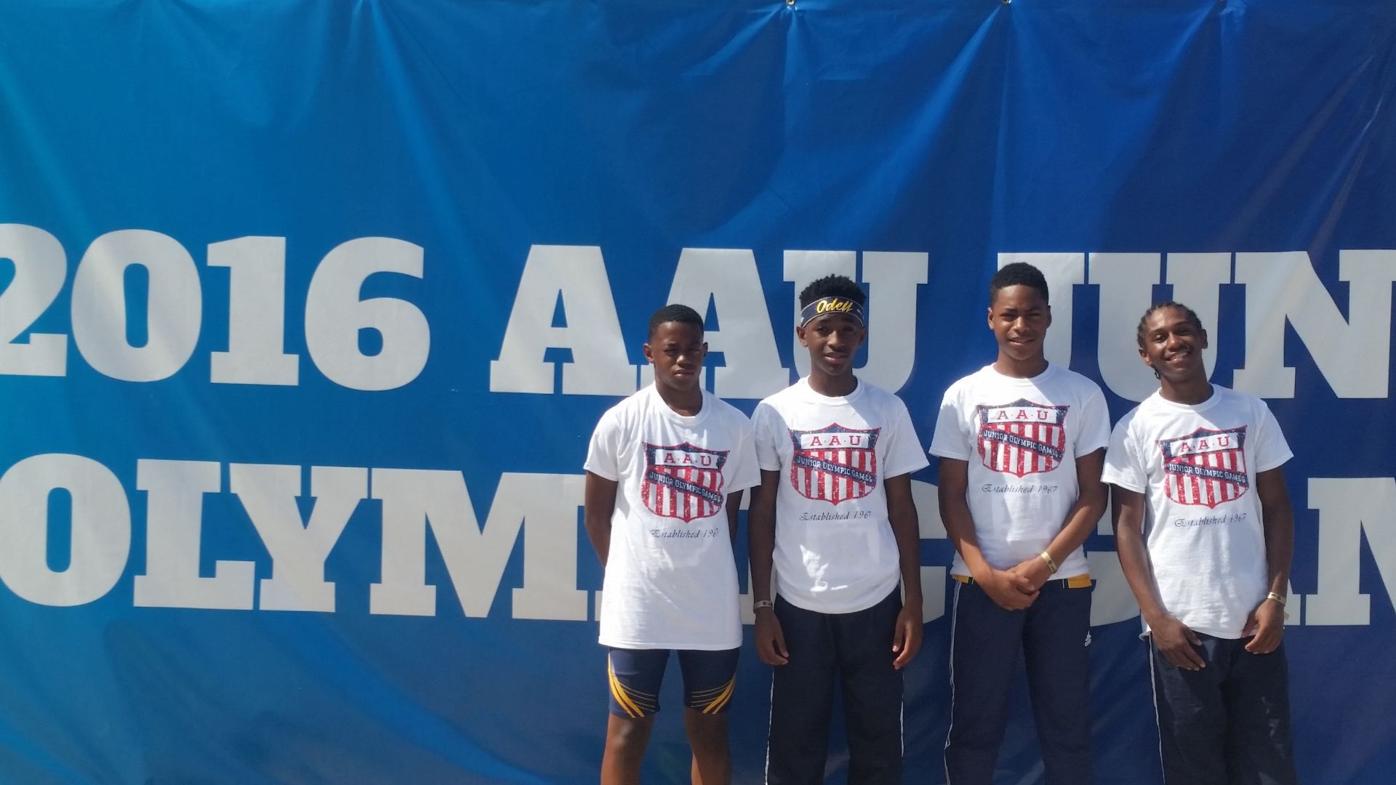 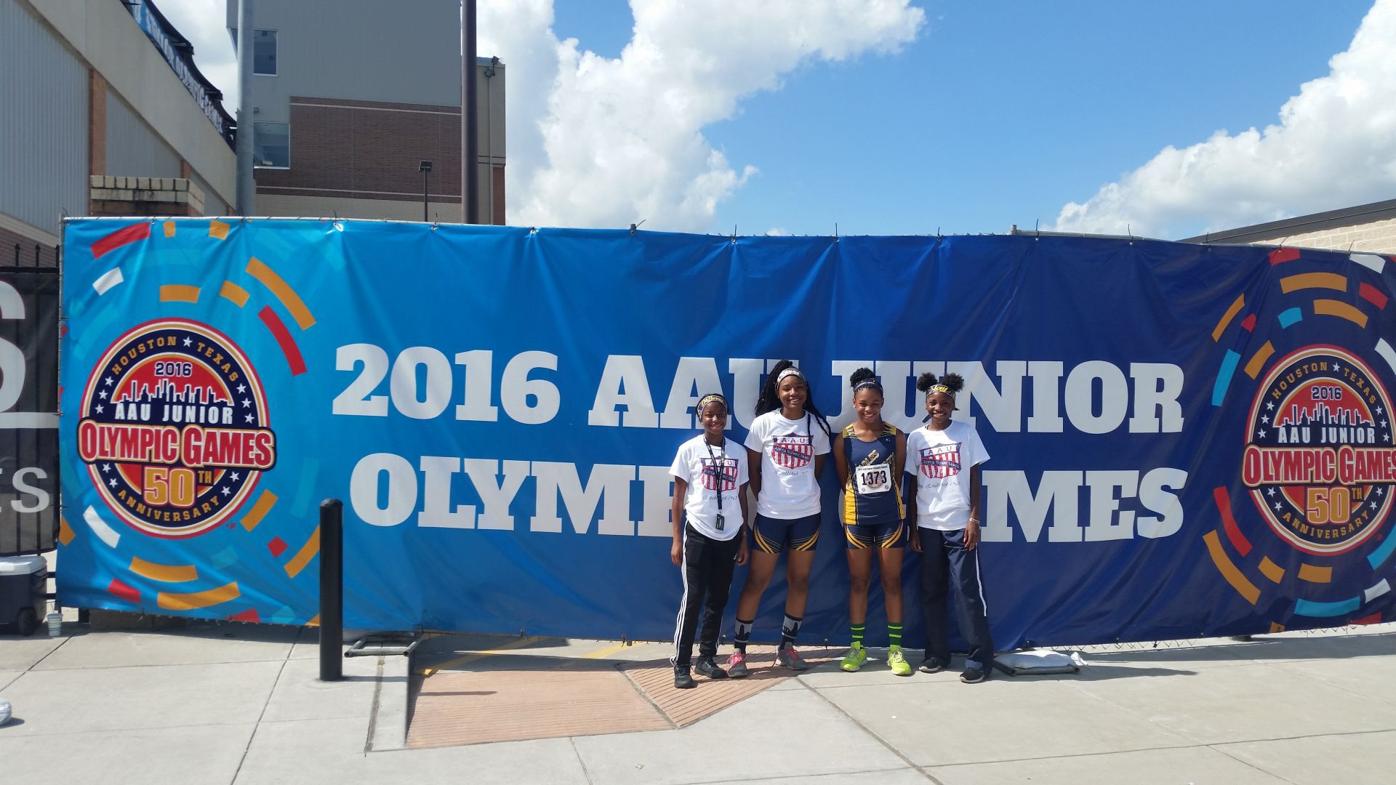 The 400-meter girls relay team of DeBorya Munu, left, Channa Hayes, Kierra Marshall and Jada Johnson placed 46th with a time of 53.41 in the Intermediate girls race at the Junior Olympic Games.

Waldorf Elite's Raven Kennedy, left, and teammate Christian Wilbon each competed in the 100- and 200-meter dashes at the Junior Olympic Games.

The 400-meter girls relay team of DeBorya Munu, left, Channa Hayes, Kierra Marshall and Jada Johnson placed 46th with a time of 53.41 in the Intermediate girls race at the Junior Olympic Games.

The athletes punched their tickets during a district qualifier held June 11 to 12 at C.H. Flowers High School in Prince George’s County and then the nationals, which were held June 24 to 26 at the Prince George’s Sports & Learning Complex in Landover.

The top four relays, top five finishers in field events and top six in track events all qualified for the Junior Olympic Games, which featured more than 10,000 athletes competing in brutal 100-plus-degree weather.

“They did well,” said coach Pamela Muhammad. “With the heat wave we had I think it really played into how they were able to hold up in that Texas heat and perform well because they’ve been practicing in 90-, 95-degree-plus.”

“I’m happy with how I did, but I think I could have done better if it wasn’t as hot as it was,” Kennedy said of the 100. “My start could have been better [but] it was kind of good.”

“She’s from another club and she was a distance runner [for them], but we knew she was a sprinter,” Muhammad said. “Once we transitioned her over [to sprints] she’s been running the lights out ever since.”

“I needed to keep my form, lift my knees and have a good start,” Wilbon said. “[Running against tough competition] made me run better. I like a challenge. It makes me do better.”

In the 100, Wilbon won his second heat with a 14.04 and then clocked a 14.13 in the semifinals, good for 16th place. He was also named All-American after winning the 55 dash during nationals during the indoor season.

Wilbon won his heat in the 200 dash competing as a 9-year-old. Also, Wilbon won nationals last fall in the 60 dash.

“Yes I am happy,” he said, “Last year I didn’t make it as far. I could have done better and my goal is to make it to the final.”

“He’s new to track but he had a lot of natural athletic ability,” Muhammad said. “He needed to work on his conditioning and his technique, but for a newbie to track he did extremely well. It’s a lot of pressure when you’re new to track and then you’re put on a relay. We were very proud of his results.”

“Our little rockstar for the games in terms of attitude and spirit was Christian Homer,” Muhammad said. “He is the do-anything-you-ask-him kind of kid. Whatever you need him to do he’s ‘Yes, coach.’”

“He’s got some really good natural athletic ability,” Pamela Muhammad said of Donovan. “We just got him this outdoor season and we’ve been working on tweaking his technique so we can get his speed up even faster. He was going through a growth spurt in his hip plexus so he ran with pain, but because he hates to lose it was no big deal for him. But I promise you for indoor and next outdoor season you will hear Donovan Stanley-Reeves’ name.”

In the girls relays, Channa Hayes, Jada Johnson, De’Boray Munu and Marshall placed 46th with a time of 53.41 in the Intermediate girls 400-meter relay race.

And Kayla Jones, Samantha Meriweather, Miketta Anderson and Sanai’ Haythe broke the tape in the 100 in 55.49, good for 48th in the 400 relay.

“She’s another one who hates to lose,” Muhammad said. “She’s going to give everything she has. The best anchor you could ask for.”

The team, which is comprised of 80 members ages 4 to 19, will begin its indoor season after Veteran’s Day with practices at John Hanson Middle School in Waldorf.