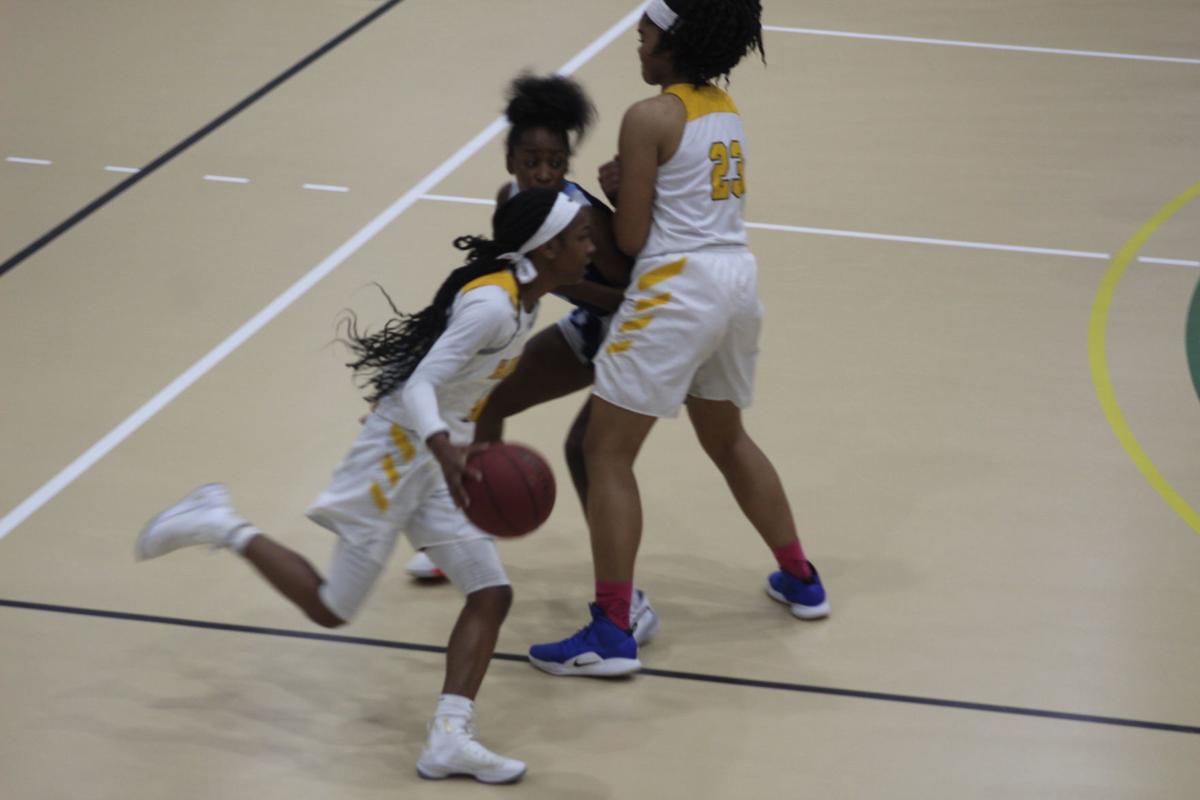 College of Southern Maryland women’s basketball player Amaya Yancey gets a high screen from forward Karalina Lawrence in Tuesday’s game against visiting Prince George’s Community College. The Hawks pulled away in the second half for a 91-74 victory over the Owls in the Maryland JUCO clash. 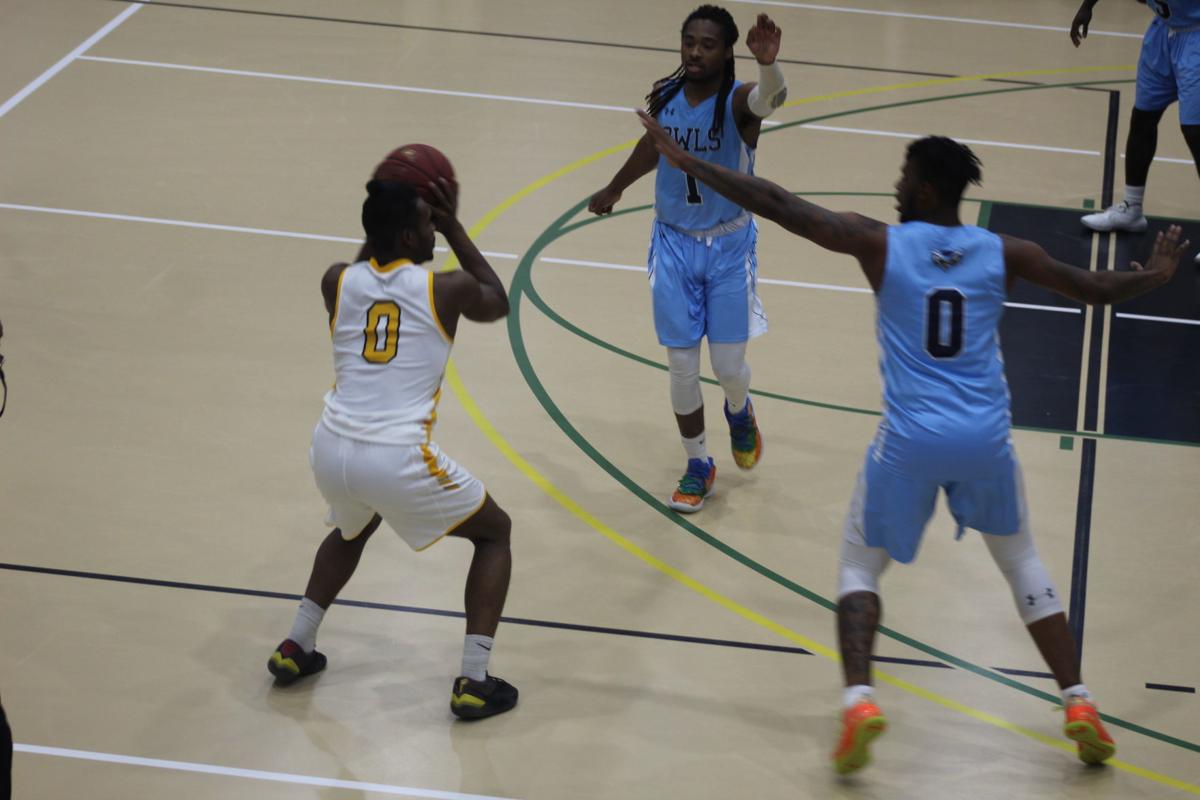 College of Southern Maryland’s Warrick Godwin prepares to launch a three-point shot in the second half of Tuesday’s men’s Basketball game against the visiing Prince George’s Community College Owls. The Hawks eventually prevailed in overtime, 132-121, in their Maryland JUCO opener.

College of Southern Maryland women’s basketball player Amaya Yancey gets a high screen from forward Karalina Lawrence in Tuesday’s game against visiting Prince George’s Community College. The Hawks pulled away in the second half for a 91-74 victory over the Owls in the Maryland JUCO clash.

College of Southern Maryland’s Warrick Godwin prepares to launch a three-point shot in the second half of Tuesday’s men’s Basketball game against the visiing Prince George’s Community College Owls. The Hawks eventually prevailed in overtime, 132-121, in their Maryland JUCO opener.

In a pair of games that had very little in common other than the end result, the College of Southern Maryland men’s and women’s basketball teams swept Prince George’s Community College in a doubleheader on Tuesday evening.

Immediately after the CSM women (3-1 overall, 1-0 in the Maryland Junior College Athletic Conference) upended Prince George's in a game that was only close briefly, the CSM men (4-5, 1-0) rallied from a seven-point deficit with just over one minute remaining in regulation to force overtime and then the Hawks eventually toppled the Owls, 132-121, in the extra session. In a game that featured numerous runs, CSM got the ones that mattered most in the end.

“When we were down [105-98] with about one minute left I told the guys to stay focused and just keep fighting,” said CSM men’s basketball coach Alan Hoyt, a Great Mills High School graduate. “We got a break when they missed a couple of free throws toward the end [of regulation] and then we didn’t have to settle for a three-pointer. Then we had the fast start in the overtime and scored 26 points in those five minutes.”

The CSM men started the game slowly as Prince George's scored the first seven points in just over a minute, forcing Hoyt to call his first timeout at that point. But the Hawks responded with a prolonged 21-3 run over the next five minutes, then after the Owls climbed to within 34-26 the Hawks countered with a 9-0 run for a 43-26 lead, their biggest of the night.

Prince George's closed out the first half on a 18-8 run to get within 51-44 and the Owls then opened the second half quickly to take a 59-58 advantage, their first since the opening three minutes of play. From there the teams primarily traded buckets until a late flourish by Prince George's enabled the Owls to forge a 105-98 lead with 1 minute 24 seconds remaining, prompting Hoyt to use his final timeout.

Over the last minute of play CSM closed out the game on an 8-1 run as Shawn Barclay connected on a pair of layups in the final 16 seconds, the second of which tied the game at 106 with 5.4 seconds remaining. After the Owls called their final timeout, Prince George's guard Jonathan Sterling missed an open jumper from deep in the right corner that could have lifted the Owls to a victory.

Once the overtime began, CSM took control even with three players having fouled out in regulation. Lelan Eackles (a St. Mary's Ryken High School graduate from Waldorf) scored the first two buckets of the extra session, then Warrick Godwin added a three-pointer that gave the hosts a 116-109 lead with just over three minutes remaining. Prince George's stayed close until the final minute of the overtime when Armon Williams connected on four free throws and three baskets to give the Hawks plenty of breathing room.

“We probably have nine, 10 guys that can play this year,” Hoyt said. “Our depth is definitely one of our strengths. We have 15 new guys on the team this year, so they’re still learning how to work together with one another. We had a few lapses tonight, but we did a lot of good things. We finished regulation on a run, then we scored 26 points in overtime. That’s tough to do.”

In the women’s game between the same two teams that preceded the men’s contest, there was considerably less drama as the host Hawks led after each frame en route to a 91-74 victory.

CSM owned a modest 44-37 lead at the intermission, but the Hawks broke open the game with an 11-2 run midway through the third quarter that featured two baskets each from Imani Holloway and Amaya Yancey.

The CSM women led by as many as 18 points in the third quarter, then pushed the advantage to at least 20 points on four separate occasions in the fourth quarter before the Owls made a brief run courtesy of seven Hawks turnovers to get within 79-68 with 3:20 remaining. But that proved to be the last hint of any comeback for the Owls.

CSM countered with a 12-3 run over the next two minutes to seal the verdict. Freshman Karalina Lawrence, once a member of the Belarus U-14 National team, and Chenice Lewis scored three buckets during a 90-second span that were too much for the Owls to overcome. Jackson was pleased that the Hawks could head into the Thanksgiving Day feast with a winning record in the Maryland JUCO.

“This is the first time that we’ve been 1-0 in conference in a long time,” Jackson said. “They get to eat well Thursday but then they’ll be back on the floor running on Friday. Hopefully, they won’t get too comfortable on Thursday.”