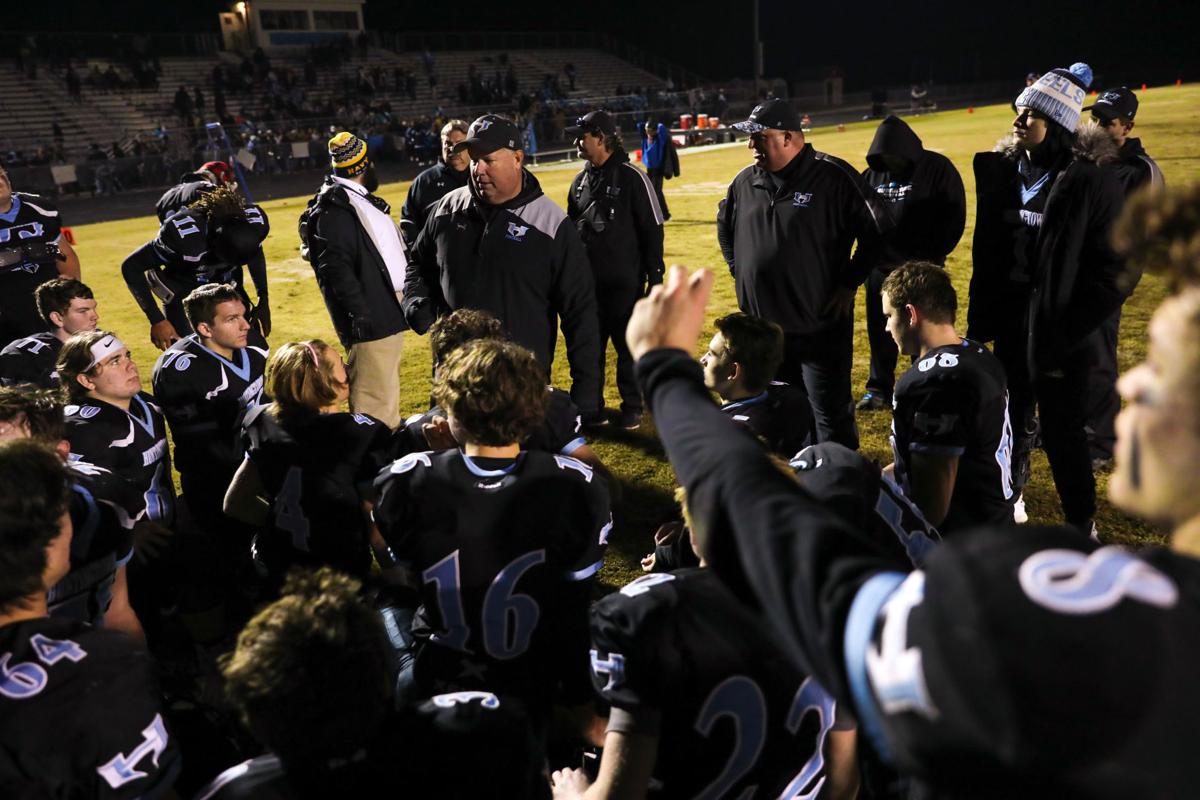 Huntingtown head coach Paul Friel talks with his team following its Nov. 15 playoff win over St. Charles. The Hurricanes host Damascus in the 3A state semifinals on Friday night. 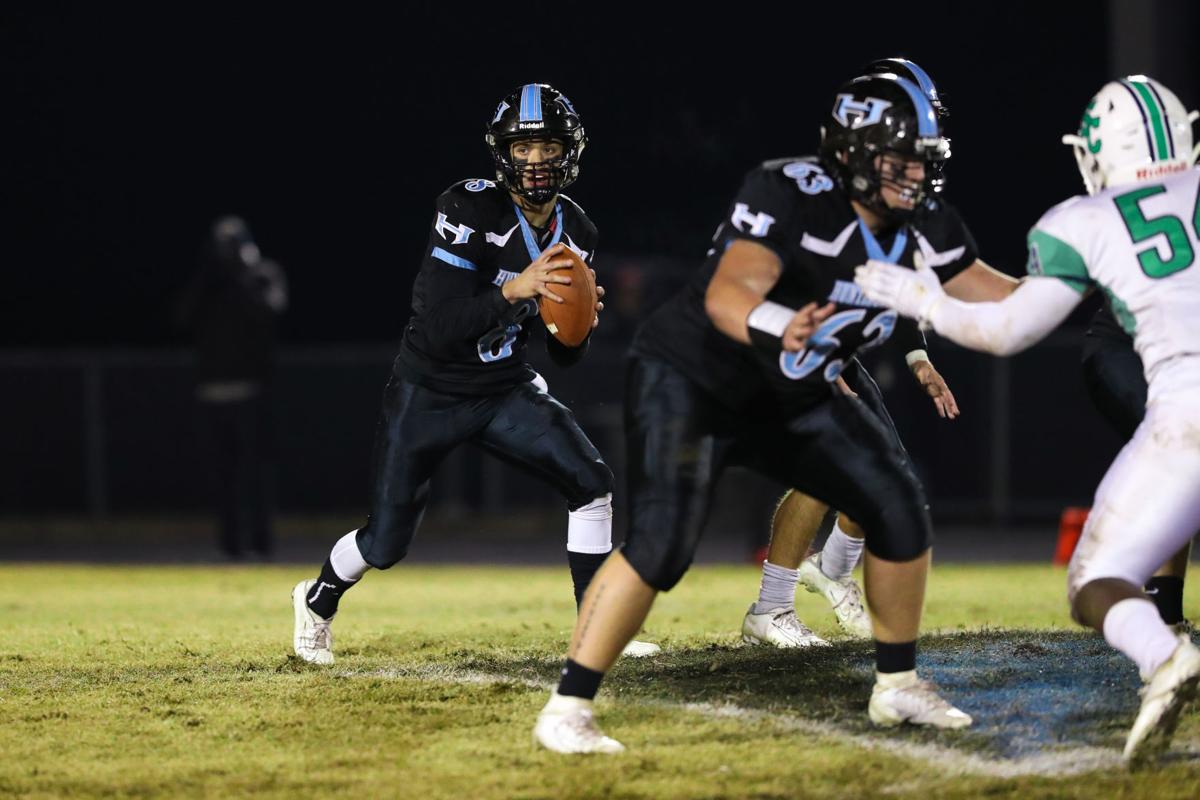 Huntingtown quarterback Trent Connolly and his Hurricanes teammates will host Damascus at 7 p.m. Friday in the 3A state semifinals. 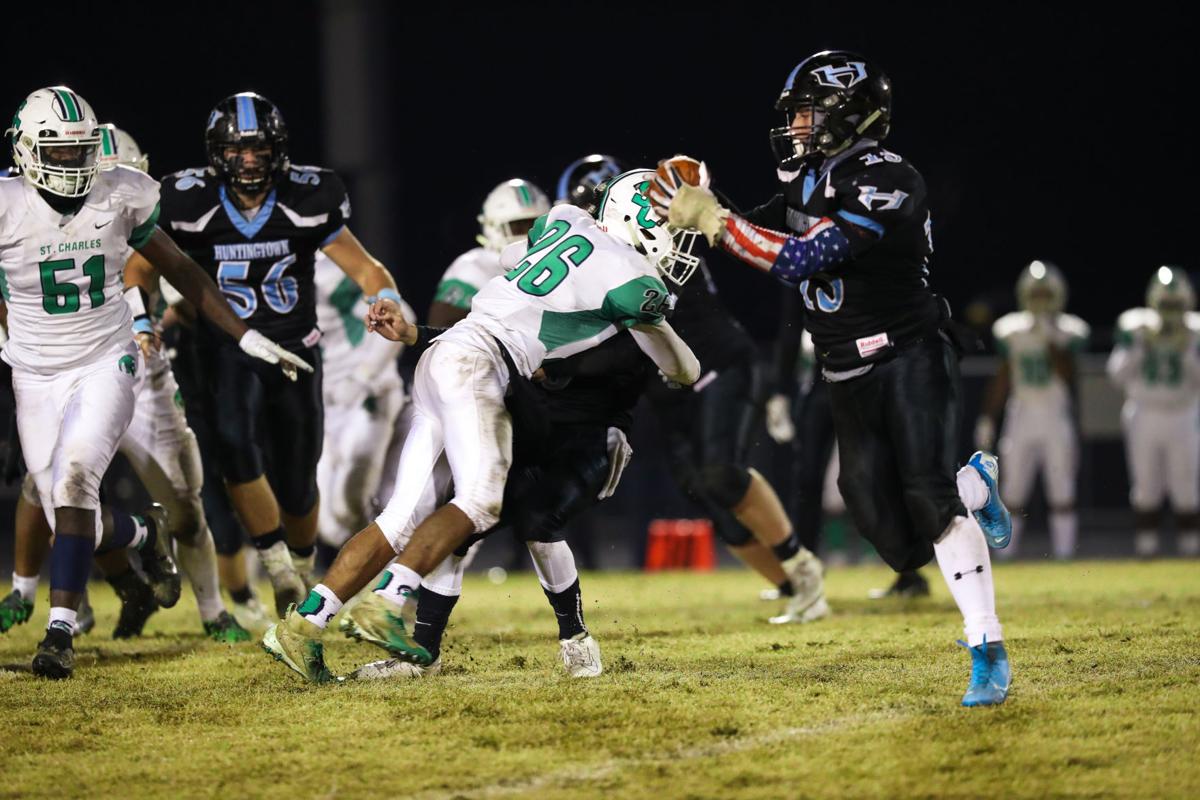 Huntingtown senior Clay Wargo carries the ball in the team’s Nov. 15 playoff game against St. Charles. The Hurricanes will host Damascus in the 3A state semifinals at 7 p.m. Friday.

Huntingtown head coach Paul Friel talks with his team following its Nov. 15 playoff win over St. Charles. The Hurricanes host Damascus in the 3A state semifinals on Friday night.

Huntingtown quarterback Trent Connolly and his Hurricanes teammates will host Damascus at 7 p.m. Friday in the 3A state semifinals.

Huntingtown senior Clay Wargo carries the ball in the team’s Nov. 15 playoff game against St. Charles. The Hurricanes will host Damascus in the 3A state semifinals at 7 p.m. Friday.

When Huntingtown senior Clay Wargo thinks about the opportunity that awaits him and his teammates on Friday night, he can’t help but be a little excited.

“I’m ecstatic,” he said just after the Hurricanes’ football practice concluded on Tuesday night. “I feel like each week is a bigger and bigger challenge. I feel like we’ve risen to the challenge and persevered every challenge we’ve faced so far. I believe we can rise to this challenge this week.”

This week’s challenge is formidable, as top seeded Huntingtown (12-0) welcomes the fourth-seeded Damascus Hornets (10-2) at 7 p.m. Friday with a spot in the Class 3A championship game on the line. The Montgomery County power has 10 state titles to its credit, including a recent run of three straight from 2015-17. The Hornets also boast some of the top recruits in the state in senior Bryan Bresee and junior Ryan Linthicum, both Clemson University commits.

That could create an intimidating situation, but the Hurricanes are embracing the task in front of them.

“I’m excited for the challenge, honestly,” said Huntingtown senior quarterback Trent Connolly, who recently signed to play lacrosse at Wingate University (N.C.) “Playing some of the top recruits in the class is just an exciting feeling.”

The teams possess some similar numbers on the season, with both boasting defenses that have generally stifled their opponents.

Damascus has allowed its opposition to score in double figures just four times this season and has pitched four shutouts. The Hornets only loss on the field came in a 21-7 setback to defending 4A state champion Quince Orchard in the season’s second week. Their other loss came via forfeit to Rockville to open the season.

Huntingtown, meanwhile, has allowed just three teams to score more than once and reach double figures. Of their nine other games, the Hurricanes have logged five shutouts, with two coming over the past three weeks in the postseason. And as tall as the task this week may be, Huntingtown is preparing the same as they always do.

“We’re just grinding throughout the week,” said senior wide receiver Anthony Smith, who recently committed to play collegiately at North Carolina State. “Every week that’s what we do, same thing, same routine. We’re not looking at them any different. We’re going through our same progressions, doing the same thing, executing plays.”

While there are certainly some well-known names that will be on the other sideline, it’s not a situation that’s unfamiliar to Huntingtown head coach Paul Friel, who over the course of his coaching career has found himself in a few similar positions.

“I’ve been a part of those games. They can be a lot of fun,” he said after his team’s state quarterfinal victory over Wilde Lake. “I never look ahead, but I know the kids they have and that kind of stuff. You love to game plan against those teams and see what you can come up with. I’ve been a part of some that haven’t gone well and some that have been phenomenal. Hopefully we come up with something to have a chance.”

For a player like Wargo, a Hurricanes’ leader who has been in over 170 tackles this season and recently signed his letter-of-intent to play baseball at Coastal Carolina University, the week’s game provides not just the opportunity to go up against a successful program with some high-profile recruits, but also a chance to extend his football career for one more game.

“Basically one more week is the goal for me every week,” he said. “Once this is over I’m never going to play football again. Every week I’m just trying to fight for one more week. The fact that this week is a special type of week with Thanksgiving and everything just gets me that much more excited to play.”