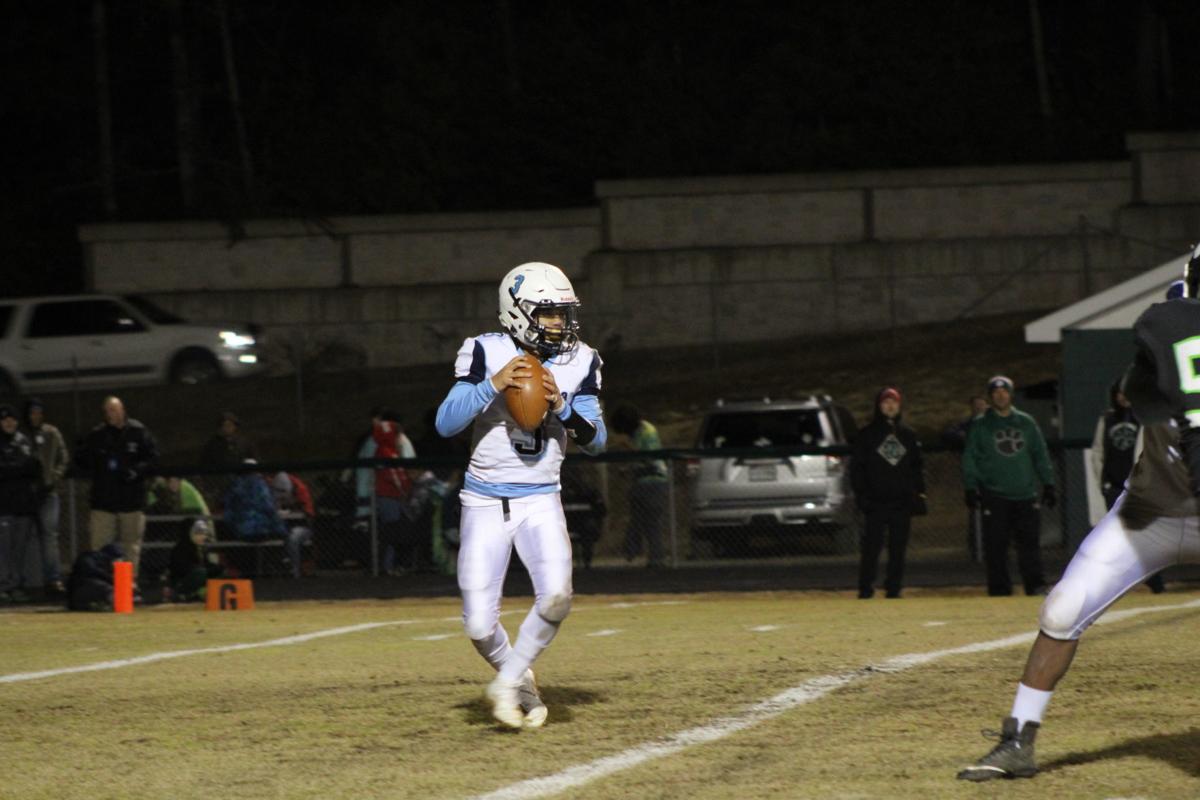 La Plata senior quarterback Donnie Bowman drops back to pass during Friday night’s Class 2A South Region first round contest at Patuxent. The hosts topped the Warriors by a final score of 18-7. 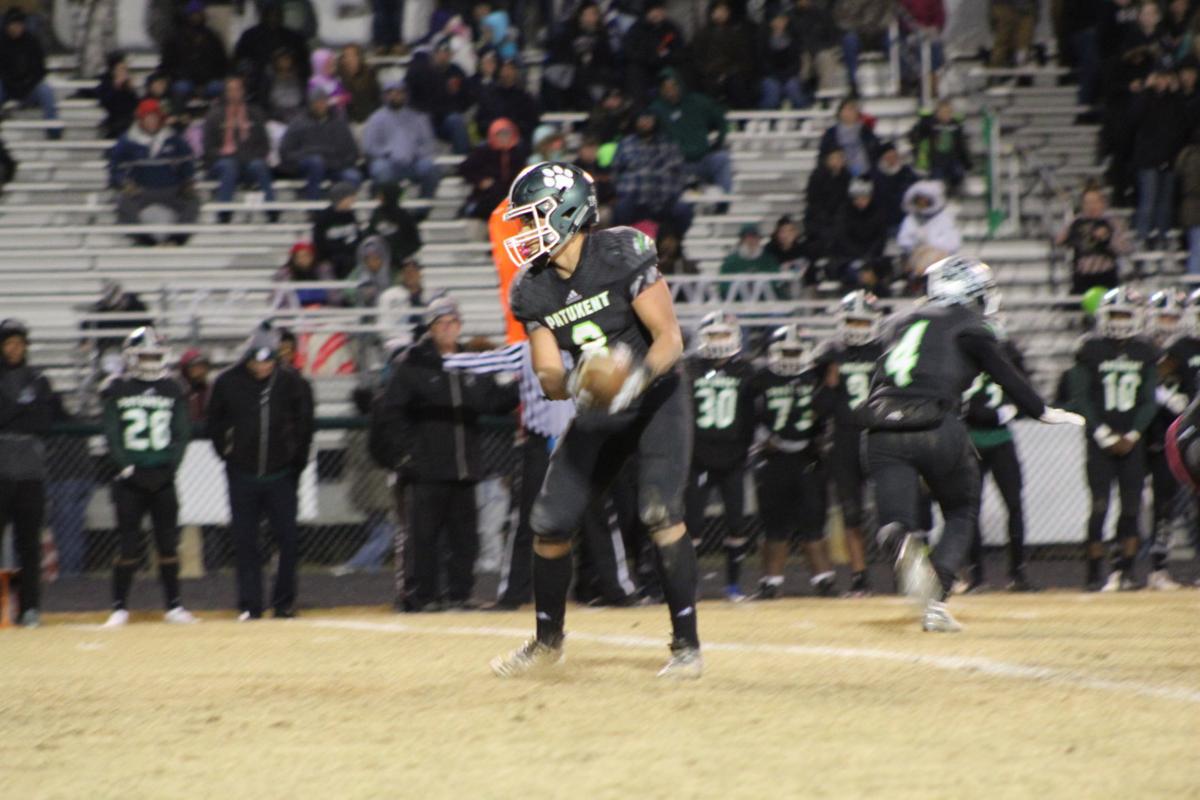 Patuxent junior Adam Commodore holds the football during Friday night’s Class 2A South Region first round contest versus the visiting La Plata Warriors. Commodore accounted for all three of the Panthers’ touchdowns in an 18-7 win over the Warriors. 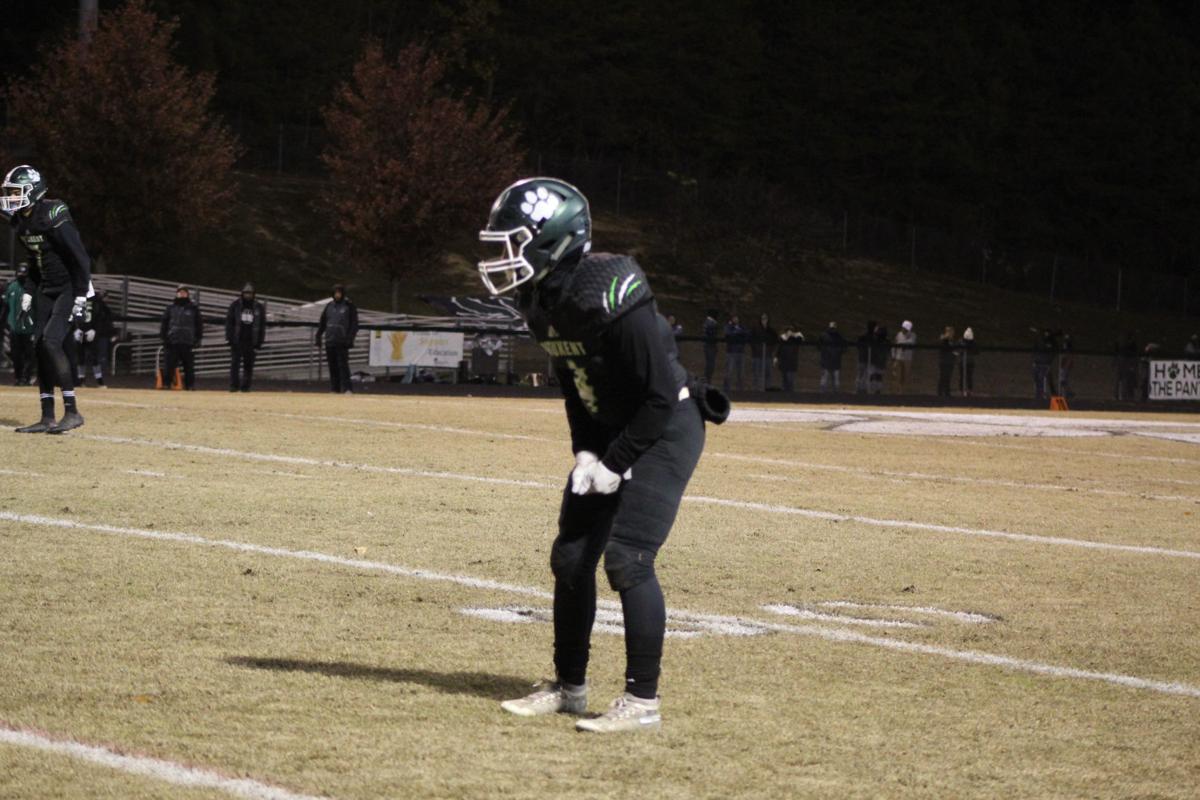 Patuxent senior Derrick Mellen eyes the backfield while on defense against La Plata in Friday night’s Class 2A South Region first round contest. Patuxent won by a final score of 18-7 and will face Douglass in the second round.

La Plata senior quarterback Donnie Bowman drops back to pass during Friday night’s Class 2A South Region first round contest at Patuxent. The hosts topped the Warriors by a final score of 18-7.

Patuxent junior Adam Commodore holds the football during Friday night’s Class 2A South Region first round contest versus the visiting La Plata Warriors. Commodore accounted for all three of the Panthers’ touchdowns in an 18-7 win over the Warriors.

Patuxent senior Derrick Mellen eyes the backfield while on defense against La Plata in Friday night’s Class 2A South Region first round contest. Patuxent won by a final score of 18-7 and will face Douglass in the second round.

Trailing by one point in the fourth quarter of Friday night’s Class 2A South Region first round contest, Patuxent senior Dajore Brooks knew he wanted to make a play for his team after he lost two fumbles earlier in the game.

“I started off playing bad, so I knew that later in the game I had to make up for it some way somehow,” Brooks said.

On a third down-and-2 from their own 41-yard line, the Panthers were able to pick up the first down on a 35-yard run from Brooks which set up the go-ahead touchdown four plays later.

“[In the fourth quarter,] I had a big run during a drive that ended with a touchdown,” Brooks said.

“That was probably one of the grittiest performances I’ve seen from our team all year long, especially Adam Commodore,” Patuxent head coach Nick Allen said. “He had a great game.”

La Plata next had the ball with a chance to drive down the field and score the go-ahead touchdown. But on the fifth play of the drive, Warriors senior quarterback Donnie Bowman had his attempted screen pass intercepted by Commodore who was able to run 39 yards into the end zone with 3:20 remaining to help seal the Panthers’ victory.

“I was doing the same stuff all game. As soon as the screen man popped up, I would just run down on it. I was doing that the whole game, and [La Plata] finally threw it and I capitalized,” Commodore said. “We are in the playoffs now. We know any game could be our last game. We just fight knowing this could be our last chance to ever play football for a lot of seniors, so we play for them.”

With the win, their eighth in a row, fourth-seeded Patuxent will play top-seeded Douglass of Prince George’s County in a second-round region contest. The game is scheduled for 1 p.m. Saturday at Wise High School in Upper Marlboro.

“The confidence we’ve built [during the eight-game winning streak] with our team has helped us significantly,” Panthers senior Cade Rocarek said. “Never getting down after one touchdown helps us and we’ve built off of every win.”

The Panthers (8-2 overall) jumped out to a 6-0 lead on a 63-yard strike from Commodore to Rocarek less than two minutes into the game on the third play from scrimmage.

“Unfortunately, a couple of big plays and some breaks didn’t go our way. We were right in that game until the end,” La Plata head coach John Lennartz said. “We went out and competed. Our kids haven’t quit all year and tonight was no different. The pick at the end of the game certainly kind of sealed it for them, but outside of that it was a tough fought game.”

Patuxent appeared poised to put up points on its second drive, but Brooks fumbled on a 46-yard run from just outside the red zone to give the ball back to the visitors.

About midway into the second quarter, the Panthers were knocking on the door with the ball on the La Plata 15-yard line, but Commodore’s pass was intercepted by La Plata senior Derez Johnson at the 1.

“We came out slow. Going forward in the playoffs, we have to come out and play better than that in the first half,” Commodore said. The Warriors (6-4) strung together a 10-play, 99-yard drive to end the first half and grab a 7-6 lead on the final play of the second quarter.

“In the first half, despite going in being down 7-6, I thought we played great,” Allen said. “We had a couple miscues, a fumble after a long run, an interception in the red zone, but our defense was playing stellar keeping [La Plata] pretty much at midfield at best.”

La Plata executed a fake punt from its own 20 on a 15-yard run from Johnson to keep the drive alive which eventually led to junior TJ Smith connecting with senior Deshawn Thomas on a 34-yard touchdown on the final play of the second quarter.

“[Patuxent] had some big plays that resulted in scores and we had a big play that resulted in a score,” Lennartz said. “We just couldn’t pop another big play. Credit to [Patuxent] for playing great defensively. They contained us.”

With the Panthers trailing 7-6 at the break, Allen challenged his team to come out in the second half and finish off the game and earn another victory.

“To be able to be a good defense, you have to be resilient. Whether it’s giving up a long run, long pass or a touchdown at the end of the half, you have to be able to move on to the next play,” Allen said. “At halftime, we challenged our guys to go out and finish. That’s been kind of our thing all year. We usually come out and play pretty good in the second half. The boys played hard.”

Commodore completed 4 of 5 passes for 121 yardsr while Brooks rushed for a game-high 108 yards on 17 touches.

La Plata was led by senior Nico Stout on the ground with nine carries for 51 yards, while Thomas caught a game-high four receptions for 74 yards.

“This was the first time since [1994] that La Plata football made the playoffs and it’s a credit to [the seniors],” Lennartz said. “Most of them have been playing all four years. This is a result of their work and their effort. Our six wins this year were a direct reflection of our seniors and what they’ve meant to the program. They put the work in and busted their butts all offseason for four years. They’ve been committed to building the program and establishing the program and they have left a heck of a legacy for future classes to follow.”