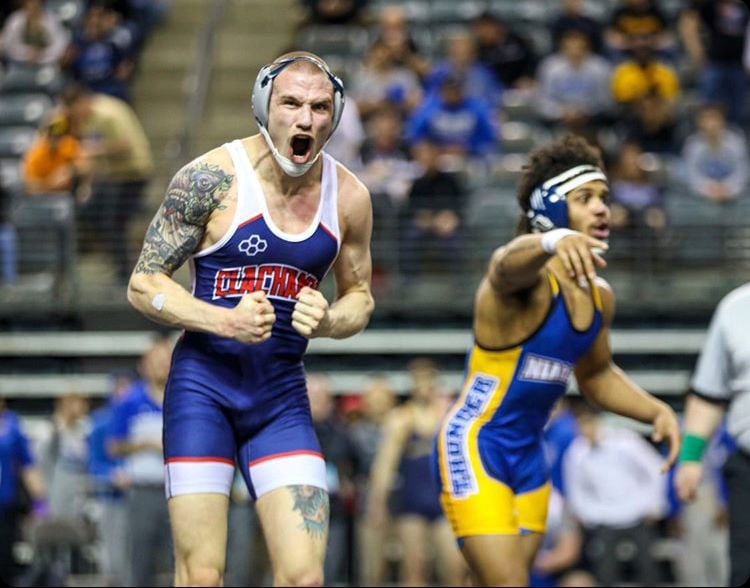 It was heartbreaking, but Marty Margolis III had come to a conclusion about his wrestling career.

“It felt like my goal was not reality anymore,” the 2015 La Plata High School graduate said, regarding how he felt trying to come back from offseason surgery on both shoulders and one hip following his first season wrestling at Clackamas Community College in Oregon last year.

It was January, and Margolis had only just set foot back on a wrestling mat. Fortunately for him, there was still time left in his season, and over the next couple of months the three-time Maryland state champion found himself and eventually finished his season as an All-American on a national champion team.

Margolis finished as the 149-pound runner-up at the NJCAA wrestling tournament March 6 and 7 at the Mid-America Center in Council Bluffs, Iowa, while he and his Clackamas teammates earned the team its second consecutive team title. The Cougars scored 133.5 points, topping second-place Northeastern Oklahoma A&M by 25 points.

For Margolis, the journey to get to the season’s successful end was an arduous road, as he tried to return to competition after the three surgeries last April, May and July.

“It was a very long offseason for him,” said his father, Marty Margolis Jr., formerly a longtime head coach at Westlake High School who wrestled collegiately at the University of Maryland. “He didn’t even return to the mat until January. He looked really tentative, like he was afraid to get in certain positions, didn’t know if his body could tolerate it. Then he wondered if he had the conditioning to go.”

Clackamas head coach Josh Rhoden, whose teams have won three NJCAA titles during his tenure, worked Margolis III hard to try to test his shoulders and get him back on track, the elder Margolis said. Slowly, the confidence came back.

“Every week I was living in the training room, getting rehab on both of my shoulders and my hips and getting in the ice bath every day, everything I could possibly do to stay healthy was my last couple months,” Margolis III said. “Train and then live in the training room. I just trusted my trainer, trusted what we were doing. I trusted when I worked and trusted my time off.

“I felt really good at regionals. Up until regionals I didn’t really feel confident in my strength in my shoulder or my conditioning, a lot of things. But once I wrestled at the regional tournament and was a regional champ and beat the No. 5 guy in the country, I felt a lot better. I felt like I dominated. I felt like I was ready to go, was the old me.”

While the work to get to that point was far from easy, finding inspiration to put in the work was helped by the consistent effort his teammates put forth, Margolis III said.

“It’s really fun when you’re on a team that you know can win it,” he said. “When you believe that your team is the best team in the country it’s a lot more fun and it’s a lot easier to be motivated and work hard because everybody else around you is working super hard. The culture, the atmosphere of Clackamas wrestling I think is unmatched. Everybody is willing to put in the work. Everybody is willing to put in the time. No one is complaining. It’s just a very cool culture to be a part of.”

Margolis III opened his national tournament with a first period fall, but then was matched up against a highly ranked opponent in Joey Revelli of Western Wyoming and Margolis won a narrow decision. Next up was the defending national champion, Cardionte Wilson of Ellsworth (Iowa). Margolis won 11-10.

“That was super exciting,” Margolis Jr. said. “Marty went up 9-3 and [Wilson] came roaring back.”

Now in the semifinals, the opponent was top-seeded Frankie Gissendanner of Niagara County Community College (N.Y.). The name was not an unfamiliar one within the Margolis family.

“I knew who Gissendanner was,” Margolis Jr. said. “Way back in January I saw him pop into the rankings at No. 3. He was high school phenom. He was a four-time New York state champion. ... I saw him take the No. 1 guy in the country into overtime as a freshman. I knew who he was and knew he was really good.

“Later on Marty said, ‘Did you see who is in my weight? Gissendanner.’ And I said, ‘Who?’ This was probably in February. And he said, ‘Gissendanner. You remember him.’ I said, ‘No, I don’t remember him.’ I did and I had already looked him up, but I didn’t want to put anything in Marty’s head.”

But the younger Margolis more than held his own, winning a heartstopping 3-1 decision in overtime.

“Except for my very first match everyone I wrestled was ranked above me,” Margolis III said. “I wrestled the No. 4 kid in the country in the second round. I wrestled the defending national champion in the quarters and I beat him, those were both one-point matches. My semifinal was who I believe was the toughest kid in the weight class. I was pretty nervous, but I was excited. I knew I just didn’t want to regret anything.”

The tournament ultimately did not end with the La Plata graduate on top of the podium, as he fell to Jake Beeson of Pratt Community College (Kansas) in the final, but the overall performance plus the team success provided for an extremely satisfying season for Margolis.

“I’m very happy about my performance, but I’m not happy about my performance in the finals. I’ve thought about it every single day since then. Just didn’t perform and didn’t get to wrestle in positions I wanted to wrestle in. He took the momentum right off the rip and I just never got back. It stinks because I know I’m a better wrestler and I just didn’t get to really wrestle him. I just want to wrestle him again. I’m disappointed, but overall I’m very happy and I’m happy that we won the team title. I’m happier with that than anything.”