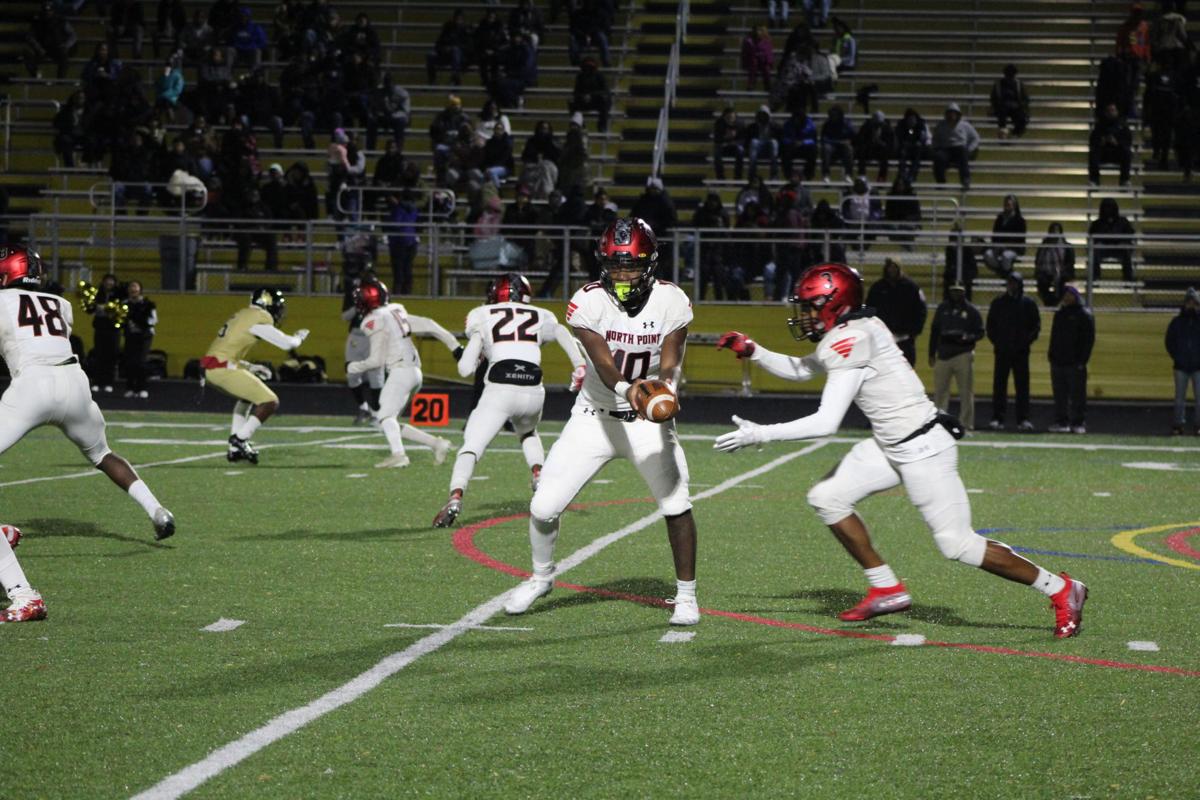 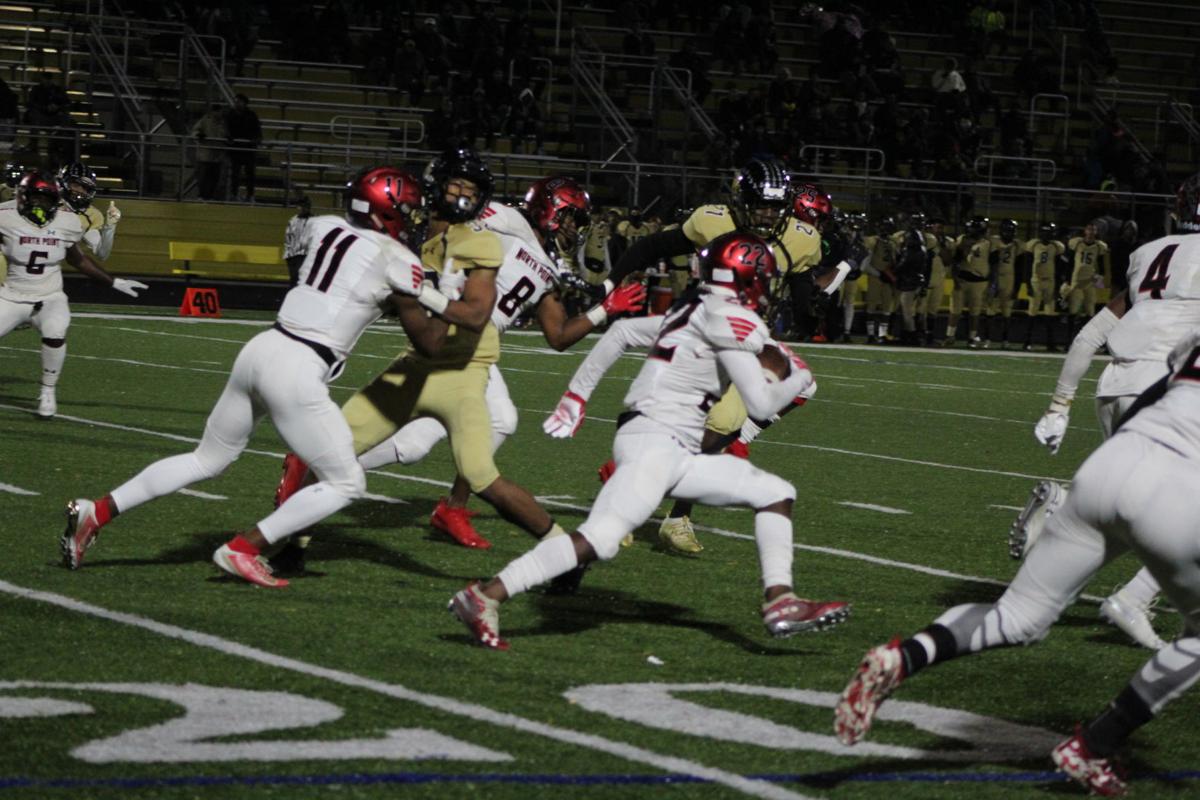 North Point sophomore Christian Homer returns a kick during Friday’s Class 3A second round contest at Oxon Hill. North Point won by a final score of 28-23 and will play at Linganore in the 3A state quarterfinals at 7 p.m. Friday. 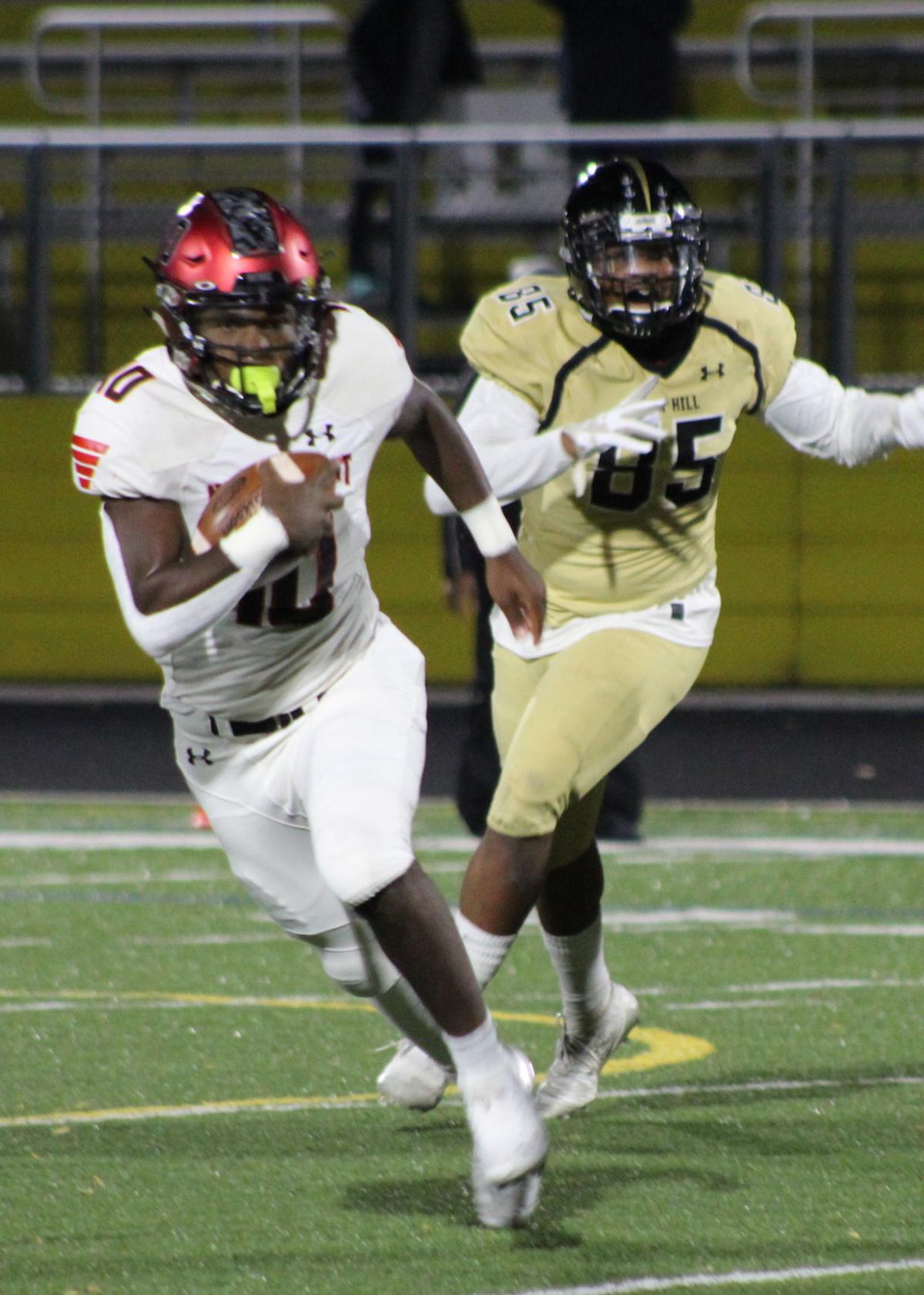 North Point junior quarterback Teddy Gleaton runs with the ball during Friday’s Class 3A second round contest at Oxon Hill High School. Gleaton threw for 90 yards and a touchdown in the Eagles’ 28-23 victory. 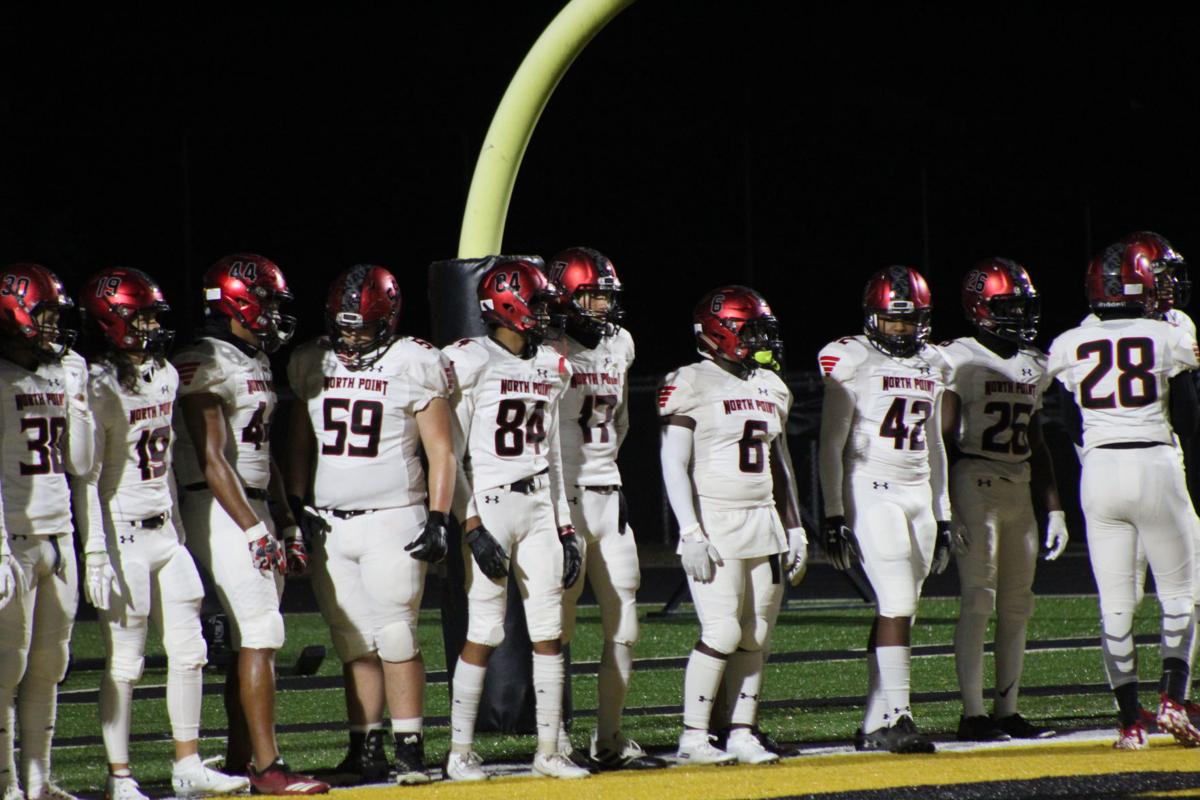 North Point defeated Oxon Hill 28-23 to advanced to the Class 3A state quarterfinals.

North Point sophomore Christian Homer returns a kick during Friday’s Class 3A second round contest at Oxon Hill. North Point won by a final score of 28-23 and will play at Linganore in the 3A state quarterfinals at 7 p.m. Friday.

North Point junior quarterback Teddy Gleaton runs with the ball during Friday’s Class 3A second round contest at Oxon Hill High School. Gleaton threw for 90 yards and a touchdown in the Eagles’ 28-23 victory.

North Point defeated Oxon Hill 28-23 to advanced to the Class 3A state quarterfinals.

OXON HILL — Trailing by one point with 3 minutes 17 seconds left in Friday night’s Class 3A South Region second round playoff game at Oxon Hill High School, the North Point offense knew one scoring drive would send the Eagles to the state quarterfinals.

“You have to learn how to win tight games,” Eagles head coach Tom Petre said.

North Point had suffered its only two losses on the season by a combined 13 points, and this time it was the Eagles’ turn to squeak out a nail-biter.

“I was telling our guys to just pound it down their mouth like we were doing, but we just had penalties that kept putting us behind the sticks,” North Point junior quarterback Teddy Gleaton said.

With 58 seconds remaining, Eagles senior running back Corey Johnson punched in the eventual game-winning touchdown from four yards out.

“I just saw the hole, hit it and no one was stopping me,” Johnson said. “I love my team and my brothers.”

Oxon Hill junior quarterback Robert Montgomery had his pass picked off by North Point junior Demarco Cuffey with 13 seconds left to help seal a 28-23 victory for the visiting Eagles.

“We had a great team win today,” Johnson said. “We were down at halftime, but we talked to our team and locked in. We’ve been through this and we are battle tested. I’ve got trust in my team, and they pulled through today.”

With the win, North Point (9-2 overall) was seeded seventh in reseeding of the final eight football teams in the 3A bracket. The Eagles will travel to Frederick County to take second-seeded Linganore in a 3A state quarterfinal contest scheduled for 7 p.m. Friday.

“This group has gotten into a couple of tight games with Huntingtown and St. Charles and weren’t able to get over the hump,” Petre said. “I think maybe some early-on maturity issues don’t allow you to do that. Then once you learn and progress through the season, you gain some maturity and self awareness as a team.”

The teams traded scores as they wrestled back-and-forth for the lead early in the contest.

About halfway into the opening quarter, North Point jumped ahead 6-0 on an 8-yard run from sophomore Michael Craig.

“We wanted to come out and punch them in the mouth, and we were doing that at first,” Gleaton said.

Gleaton connected with sophomore Christian Homer with 3:26 left in the opening frame on a 57-yard touchdown pass to regain a 14-7 edge for North Point after Gleaton’s 2-point conversion run was successful.

“I think it is a good teaching tool to get through this,” Petre said. “You have to play the whole 48 minutes and you have to finish the game. Our kids proved that tonight.”

Then with 1:16 to go, North Point gained a 16-14 advantage after a host of Eagles tackled O’Sullivan in the end zone for a safety.

The Clippers held a 17-16 lead at halftime as a 25-yard field goal from junior Wilber Rivera accounted for the only points scored in the second quarter.

“We talked about [the first half] and regrouped at halftime and came out with the win,” Gleaton said.

North Point recaptured the lead with 2:11 remaining in the third quarter on an 8-yard run from Craig to put the visitors in front 22-17.

Oxon Hill once again responded and regained the lead with an 11-play drive that ended with an O’Sullivan 5-yard rushing score to put the hosts in front 23-22 with 3:17 left in the contest.

“We fought through some tough situations tonight, and I am proud of them,” Petre said. “We talk to our kids about staying in the moment and playing the next play. You have to forget about it.”

After North Point senior Caelen Carson returned the ensuing kickoff to its own 40, the Eagles needed just seven plays to punch it in the end zone on the game-winning 4-yard score from Johnson.

“We always tell the guys that if we play a disciplined game, don’t turn the ball over and we don’t have a high number of penalties, then we can play with anybody,” Petre said. “At that point, it comes down to execution.”

For Petre and the Eagles, there is feeling to go one step further in the state tournament this year after a loss two years ago in the 4A state semifinals and a 40-33 loss last year in the 4A state final, both at the hands of Montgomery County’s Quince Orchard.

“There’s a little bit of a sense of unfinished business,” Petre said. “A lot of these kids played in that game last year and they want another shot at it. It’s not easy, but they just want an opportunity to get back and prove that they can be one of the best teams in the state.”