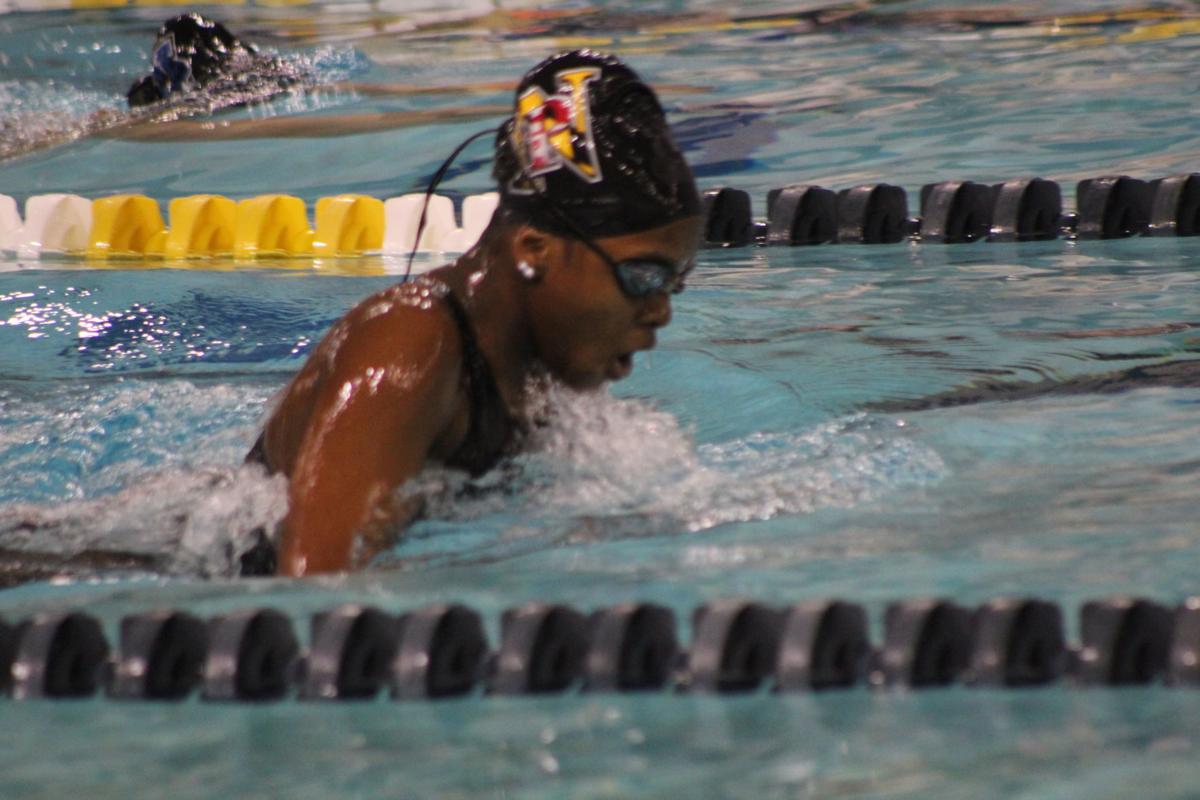 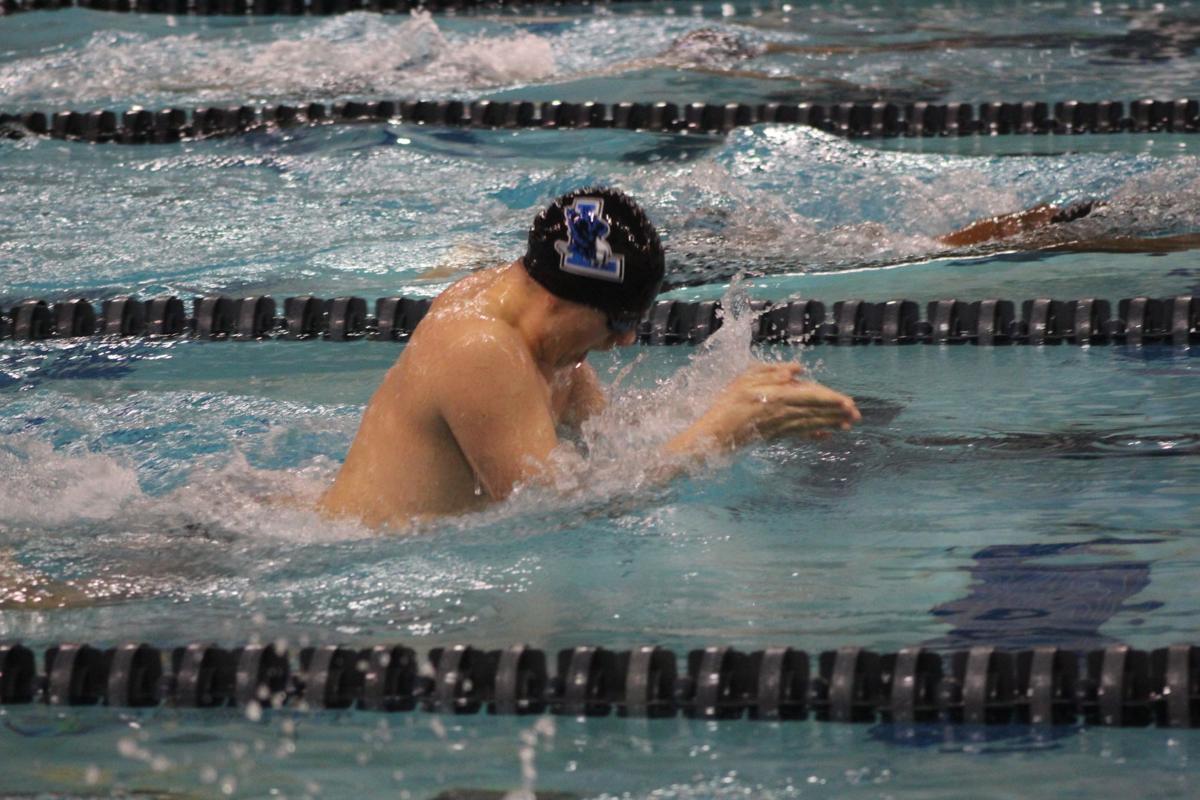 Leonardtown senior Ryan Northrup swims the 100-yard breaststroke during Thursday’s SMAC dual meet versus North Point at St. Mary’s College of Maryland. Northup and the Leonardtown boys were topped the Eagles by a final score of 146-132. 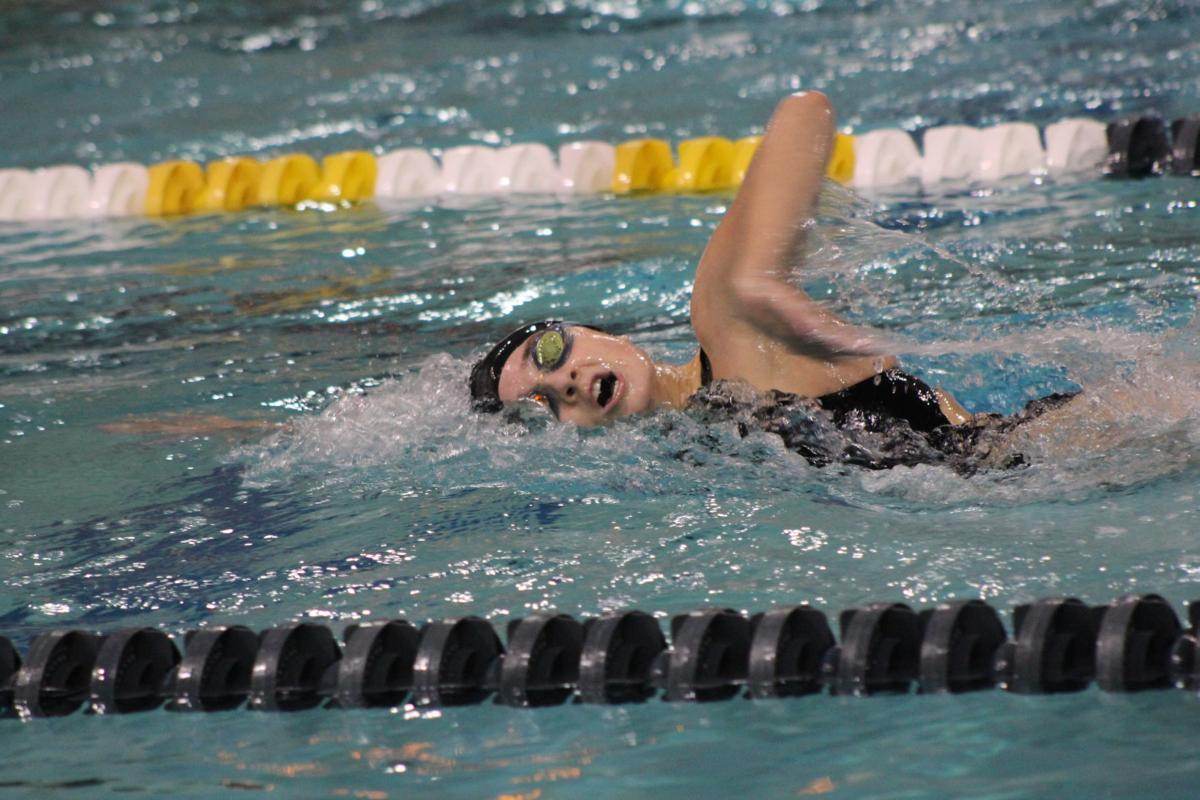 Leonardtown junior Sam Hotz swims the 500-yard freestyle during Thursday’s SMAC dual meet versus North Point at St. Mary’s College of Maryland. Leonardtown’s girls topped the Eagles and swept a tri-meet on Friday with La Plata and Calvert to finish the regular season undefeated at 13-0.

Leonardtown senior Ryan Northrup swims the 100-yard breaststroke during Thursday’s SMAC dual meet versus North Point at St. Mary’s College of Maryland. Northup and the Leonardtown boys were topped the Eagles by a final score of 146-132.

Leonardtown junior Sam Hotz swims the 500-yard freestyle during Thursday’s SMAC dual meet versus North Point at St. Mary’s College of Maryland. Leonardtown’s girls topped the Eagles and swept a tri-meet on Friday with La Plata and Calvert to finish the regular season undefeated at 13-0.

The Leonardtown Raiders are typically a powerhouse when it comes to swimming in the Southern Maryland Athletic Conference.

On Thursday, the Raiders entered a dual meet at St. Mary’s College of Maryland’s Michael P. O’Brien Athletics and Recreation Center’s aquatics center in St. Mary’s City with North Point with two undefeated squads as the boys and the girls had not lost all season.

North Point’s boys entered Thursday’s meet with an undefeated record as well, so something had to give and it did when the Eagles prevailed with a 146-132 victory over the Raiders.

“The guys have had a great season so far,” Eagles head coach Jeff Rivenburg said. “Today there were two undefeated teams and Leonardtown obviously is always a perennial powerhouse. We had to come with our ‘A’ game to swim to win. I definitely think there is room for improvement.”

On the girls side, the Raiders remained unbeaten with a 176.5-97.5 win over North Point on Thursday.

“Today might not have gone the way we wanted to for the boys, but we are still really proud of them,” Raiders assistant coach Kiera Recker said. “That was a great win for our girls, and we are very excited about that. We hope to keep seeing them improve going forward.”

After the Raiders swept a SMAC tri-meet on Friday at the Edward T. Hall Aquatic Center in Prince Frederick with a 165-106 win over La Plata and a 191-82 victory over Calvert, Leonardtown’s girls capped off an undefeated SMAC regular season with an overall record of 13-0.

“We have had a really good season. Everyone has been putting in a lot of work and working really hard,” Raiders senior Laura Scott said after Thursday’s meet with North Point. “I am just really proud to be a part of this team. These are some of the best people I have ever met. Both our guys and girls have some of the best sportsmanship I have ever seen. Just being a part of something bigger than yourself has been really awesome.”

Leonardtown’s boys finished the regular season with a 12-1 overall record after a sweep of Friday’s tri-meet, a 155-118 win over La Plata and a 161-112 victory over Calvert.

“We are still very proud of the swimmers,” Recker said after Thursday’s meet with North Point. “There were some mistakes that were made and those are the things we always work on, but overall we are still proud of them for always showing great sportsmanship. They always cheer on the other teams and are just full of class. We have a great group of kids.”

The boys meet on Thursday nearly ended in a tie, but two of the Raiders’ 200-yard freestyle relay teams were disqualified.

“It is unfortunate with DQ’s,” Rivenburg said. “It was a great meet on both sides with the boys, and it should have ended in a tie. I would be happy with that, but I think our guys swam great. [Leonardtown head coach] Alex [Marley] always has his kids ready to go and they are great.”

Raiders senior Zach Claus was a double winner with victories in the 200 individual medley (2 minutes 4.30 seconds) and 100 butterfly (55.88 seconds).

“We had been practicing really hard ahead of this meet since [North Point] is one of our rivals,” Claus said. “Overall, today was amazing for both teams. Everyone did really well on the boys and girls sides for North Point and Leonardtown.”

“We have great depth and senior leadership along with some underclassmen that have stepped up, especially today,” said Rivenburg, whose boys team went to 10-0 after defeating Leonardtown. “Our freshmen kids swam really well.”

“To be such an accomplished team, but to do it with such great sportsmanship and with some of the best people around has just been so fun,” Scott said. “I am really proud of our season and our team.”

“We only swam with 17 girls today due to injury and illness, but I am really proud of the girls. Overall, this season we have swam really well against some great teams,” Rivenburg said. “In SMAC on the girls side, it is really solid top to bottom across the board. I am happy with the results so far, but the season isn’t over. Hats off to Leoanrdtown’s girls. They are always great and they bring it every time. It was a great meet overall.”

North Point is scheduled to wrap up its regular season when it faces Calvert and Thomas Stone at 5 p.m. Friday at Lackey High School.

Leonardtown is finished with its regular season slate and will not be in action again until the SMAC championships on Feb. 8.