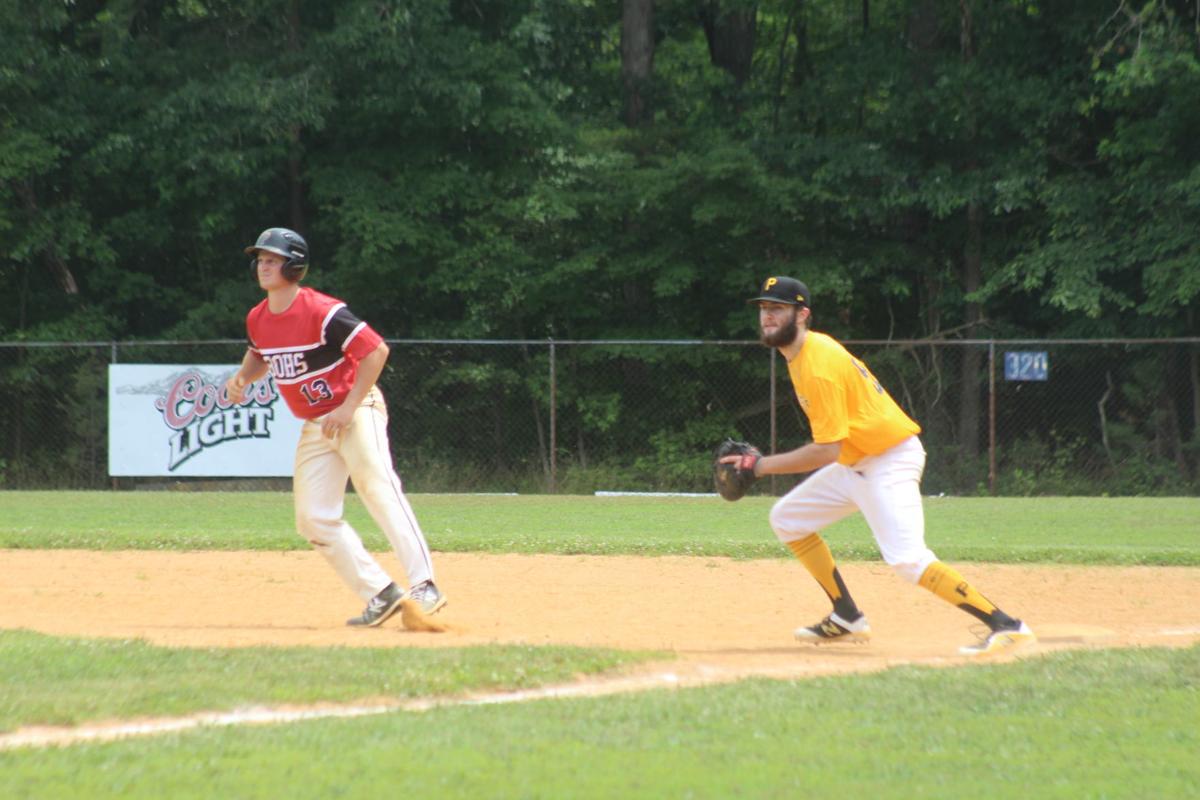 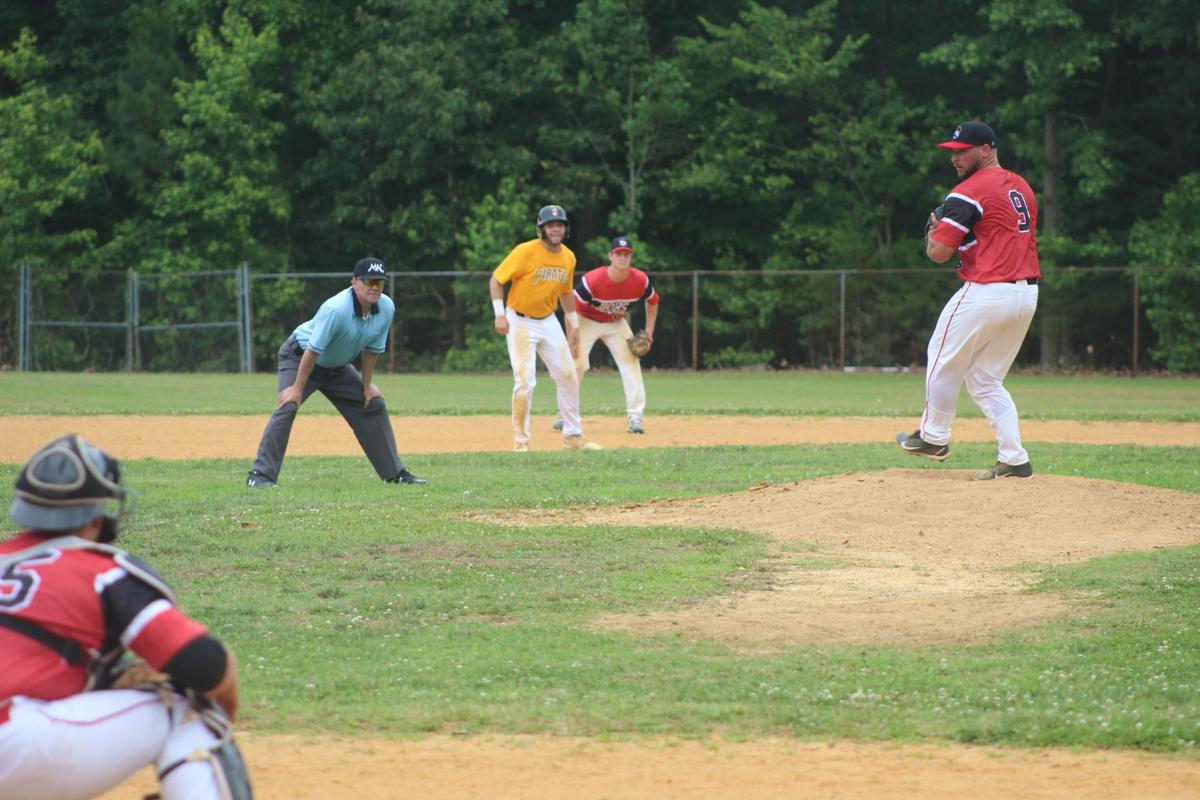 Western Charles starting pitcher Kurt Bruce prepares to fire a pitch to the plate as Pomfret’s Corey Rosier takes a long lead off second base after stealing that bag during Sunday’s doubleheader at Rainbow Construction field in La Plata. Pomfret won Game 1, 6-0, and Western Charles prevailed 4-2 in the second game. 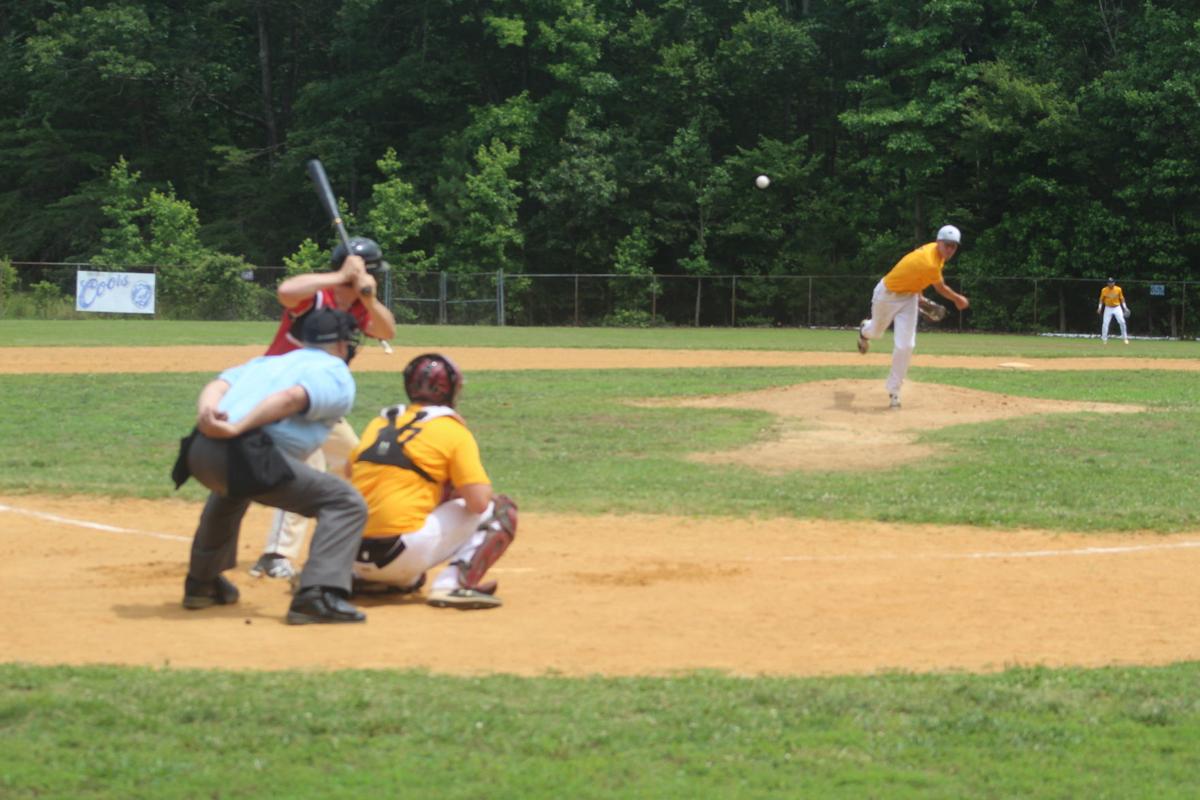 Western Charles starting pitcher Kurt Bruce prepares to fire a pitch to the plate as Pomfret’s Corey Rosier takes a long lead off second base after stealing that bag during Sunday’s doubleheader at Rainbow Construction field in La Plata. Pomfret won Game 1, 6-0, and Western Charles prevailed 4-2 in the second game.

One week after severe thunderstorms brought an abrupt end to the first day of play in the Coors Charles-St. Mary’s Baseball League, the Pomfret Pirates and defending league champion Western Charles split their doubleheader Sunday at Rainbow Construction field in La Plata on a day when warm, muggy conditions prevailed.

Pomfret (3-1 overall) cruised to a 6-0 victory in the opening game as the Pirates benefited from four Western Charles errors that eventually led to five unearned runs. Both teams were far crisper defensively in the second game, one that turned on two, two-run homers by Natty Bohs first baseman Ricky Brady as Western Charles earned the split with a 4-2 victory.

“The first time up was my best swing of the day,” Brady said of his initial two-run shot. “The second time up, he threw me three straight curveballs and I was just sitting on the third one.”

Western Charles (1-1) was participating in its first doubleheader of the summer after having an opening weekend bye and the rustiness was clearly apparent in the opener. Pomfret scored once in the home half of the first, then broke the game open with five runs, courtesy of three Western Charles errors, in the bottom of the third and neither team scored again.

In the second game, however, Western Charles was much sharper on defense and the defending champions got stellar pitching efforts from Zach O’Dell (2 runs in 4 innings) and reliever Cam Jurek who earned the victory by tossing three scoreless innings. There was no secret to Western Charles’ offense with Brady providing two, two-run homers two innings apart.

In the top of the first, Jason Murphy delivered a one-out single off Pomfret’s Dylan Bell, who was eventually saddled with the complete-game loss. Brady immediately followed with a two-run home run to straightaway center field to give Western Charles a 2-0 lead. The Pirates countered with a run of their own in the bottom of the first off O’Dell.

A virtually identical scenario played out in the third. This time, Murphy led off with a single to left field and Brady followed with his second two-run homer of the game to stake Western Charles to a 4-1 lead. Pomfret got one run back in the home half of the fourth on a single by Austin Simms, but O’Dell escaped further damage when Brady snared a liner by Darren Prebble that seemed destined for a two-run double into the right-field corner.

“When he hit it, I just jumped and stuck my glove up,” Brady said. “He really scorched it. If it gets by me, it probably clears the bases and he might have gone all the way to third the way he runs. But our pitchers were good all day. You just can’t give a team six runs and expect to beat them.”

In the opening game, Pomfret scored one run in the bottom of the first and broke the game open with five runs — four of which were unearned — in the home half of the third. Neither team scored thereafter although Western Charles threatened several times, leaving the bases loaded in the top of the fifth and two runners on base in both the fourth and seventh en route to leaving 13 runners stranded in seven innings. League doubleheaders are two seven-inning contests.

Pomfret’s Darren Samuels blanked Western Charles on three hits and two walks in 4 1/3 innings then reliever Evan Buchannon earned the victory by tossing the final 2 2/3 innings. He escaped a bases-loaded jam that he inherited in the fifth then stranded two more runners in the seventh, fanning Murphy and retiring Brady on a pop-up when Western Charles again threatened.

“It’s just great to be out here with the guys,” said Simms, a McDonough High School graduate who played an abbreviated freshman season at the College of Southern Maryland last spring. “I think we’re all just glad to be able to play this summer. I like this team. We have a lot of talent on this team.”

In their season opener one week earlier, the Pirates edged Indian Head in two close contests, 4-3 and 8-7, just before severe thunderstorms arrived to shorten the second game through five innings and nix the subsequent doubleheader between La Plata and St. Mary’s 19-and-Under team.

In the first twin bill at Rainbow on Sunday, Indian Head (2-2) rebounded to make quick work of La Plata, 17-1 in five innings and 8-3.

Indian Head hurler Greg Conden limited La Plata to just one run on three hits in five complete innings for his first win with his new squad. He had pitched for St. Mary’s Door the previous two seasons. The Door bypassed this year’s slate due in part to its main sponsor being closed because of the coronavirus pandemic.

Western Charles and Legion Post 255 are scheduled to play a single seven-inning contest at 7 tonight at Chancellor’s Run Regional Park in Great Mills and are slated to do so again at 7 p.m. July 8 to complete their split doubleheader. None of the league’s teams are scheduled to play this weekend in light of the Fourth of July holiday, but a full slate of games is scheduled for the following weekend and through the end of August.