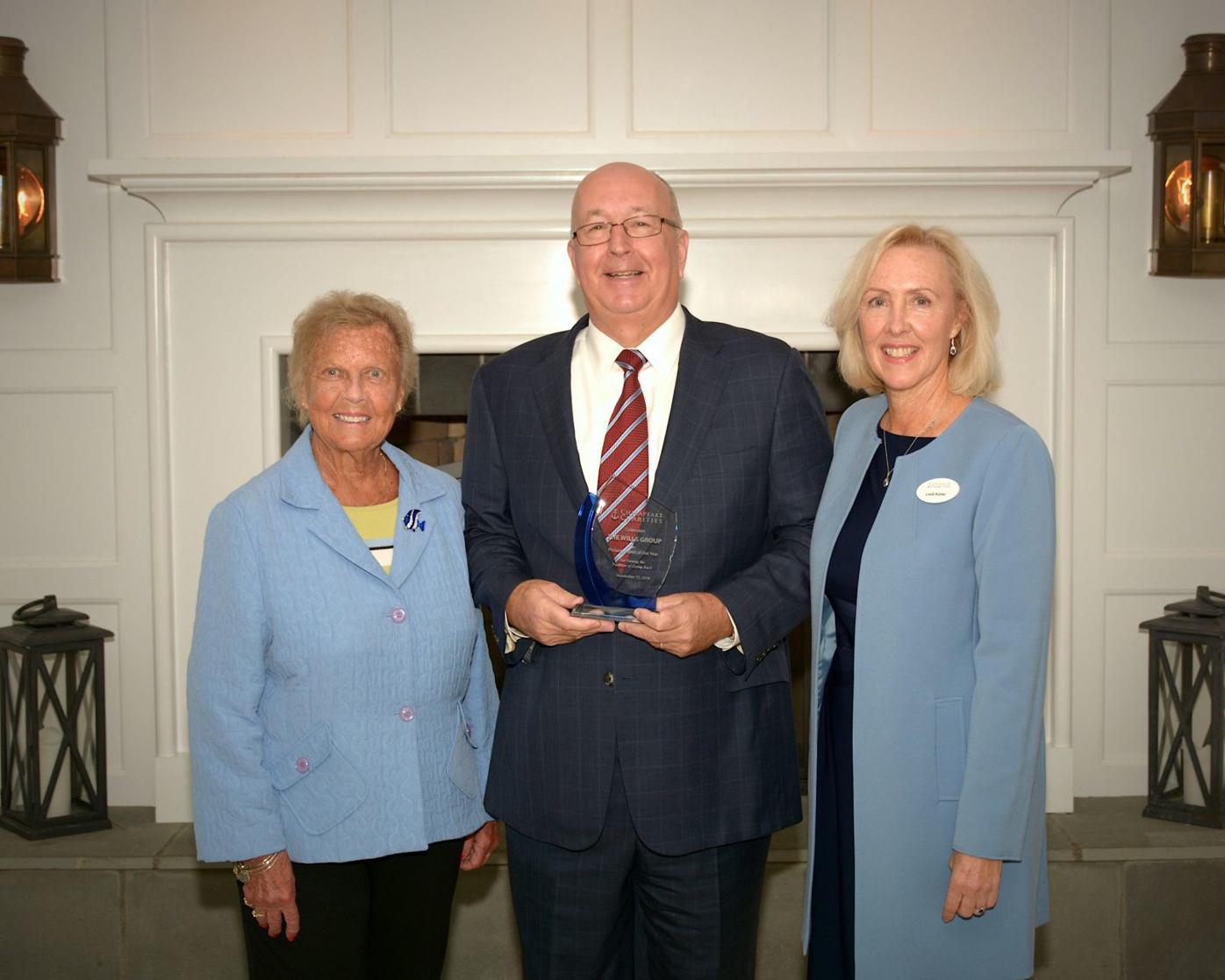 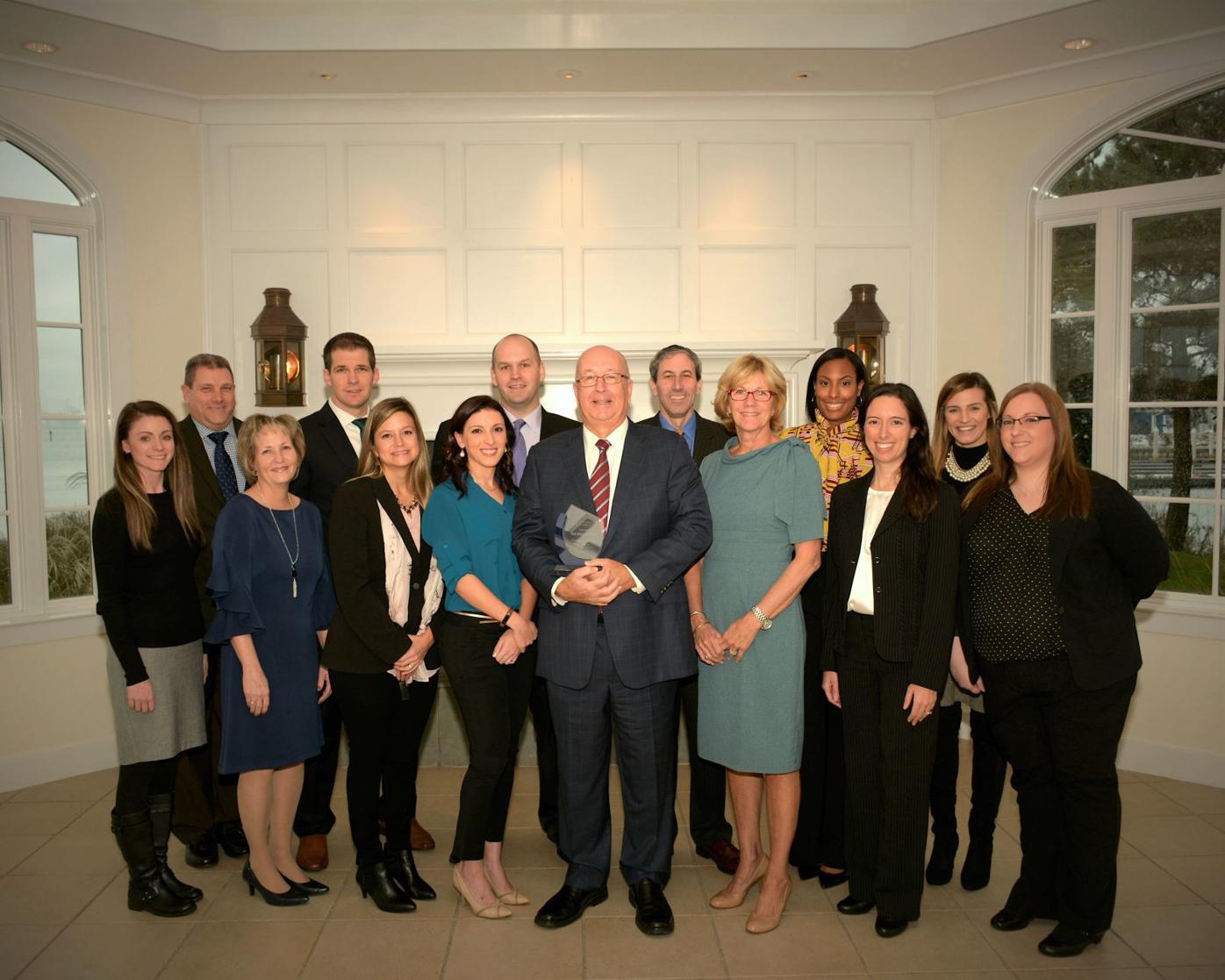 Lock Wills, center, and The Wills Group employees pose for a picture at the 2018 Celebration of Charity awards luncheon.

Lock Wills, center, and The Wills Group employees pose for a picture at the 2018 Celebration of Charity awards luncheon.

Chesapeake Charities hosted “A Celebration of Charity” awards luncheon on Thursday, Nov. 15, at the Chesapeake Bay Beach Club in Stevensville and The Wills Group received the Philanthropist of the Year Award, according to a press release.

The award was presented to Lock Wills, CEO and president of The Wills Group, by Bernie Fowler Jr., executive director of Farming4Hunger and last year’s Philanthropist of the Year recipient. Fowler said in the release, “The Wills Group has a family tradition of giving back to the communities they serve. Their corporate culture is built on the idea that we are all here to make a difference in the lives of the people around us.”

Founded in 1926, The Wills Group has always been a good neighbor and corporate citizen, according to the release. In 2017, the group provided 1.5 million meals for children in partnership with No Kid Hungry and collected 901 pounds of food. Through its Safe and Healthy Homes initiative, The Wills Group assisted 678 households through the Maryland Energy Assistance Program, distributed $61,304 and provided 16 households with heating equipment through SMO Cares.

“It is a profound honor for all of us at The Wills Group to be recognized by Chesapeake Charities as Philanthropist of the Year,” Lock Wills said in the release. “We want to ensure that our communities’ basic needs of food and shelter are met. and through our relationship with Chesapeake Charities, and our partners, customers, and the hard work of our employees, we’ve been able to make a real impact.”

In 2018, The Blackie Wills Community Leadership Fund supported several partnerships, including one with Share Our Strength, an organization focused on eliminating childhood hunger, and one with Rebuilding Together, an organization that completes approximately 10,0000 projects annually to repair homes, revitalize communities and rebuild lives. The Fund also provided support to the Maryland Food Bank, the Southern Maryland Food Bank and Lifestyles of Maryland, a Southern Maryland nonprofit organization that serves approximately 14,000 individuals by providing emergency assistance, transportation, housing and job training.

In its third year, the Chesapeake Charities event recognizes people who give back to the community in an extraordinary way. Following the luncheon’s theme of “Breaking the Cycle of Poverty,” awards were presented to organizations and individuals focused on lifting families out of poverty by providing food for the hungry, safe and healthy homes, and shelter and services to prevent homelessness. The luncheon opened with a video greeting from Dr. Ben Carson, U.S. Secretary for Housing and Urban Development, praising and encouraging charitable giving, according to the release.

“Events like this mean so much because we get to help people whose lives depend on giving back to others,” said Linda Kohler, executive director of Chesapeake Charities. “There’s no limit to where we can go as a community if we work together and pool our resources. Some of the challenges we face are daunting, like childhood hunger and homelessness, but I think if we have the will to solve those problems together, we can implement real solutions.”

The Light House Homeless Prevention Support Center of Annapolis was named Nonprofit of the Year. For nearly 30 years, the Light House has been changing lives by providing a place of belonging, education and training programs, and a continuum of services so that families remain connected and supported as their lives improve and they face new challenges.

Mark Freestate of Queen Anne’s County was honored as Volunteer of the Year for his work with St. Martin’s Ministries in Ridgely, whose mission is to provide a safety net to individuals and families living in poverty on the Eastern Shore.

For the second year, the Governor Larry Hogan Scholarship was awarded to an exemplary medical student pursuing a career in cancer research. The scholarship was presented to Amy Nemirovsky, a promising third-year medical student at the University of Maryland. Her career plans include urologic oncology and cancer research so that she can bring better treatment options to her patients.

Jeremy Todd, a third-year medical school student at Eastern Virginia Medical School, received a $500 honorarium. Alex Tsai also received a $500 award to assist him as he completes concurrent medial doctor and PhD programs at the University of Maryland.

Chesapeake Charities is a community foundation in Stevensville that supports over 90 nonprofit funds that impact a range of charitable causes including animal welfare, arts, education, health and human services, and the environment. To date they have generated more than $25 million in investment and grant funding for charitable projects in eight counties: Anne Arundel, Calvert, Caroline, Charles, Dorchester, Kent, Queen Anne’s and Talbot. For more information, contact Chesapeake Charities at 410-643-4020, info@chesapeakecharities.org or go to www.chesapeakecharities.org.