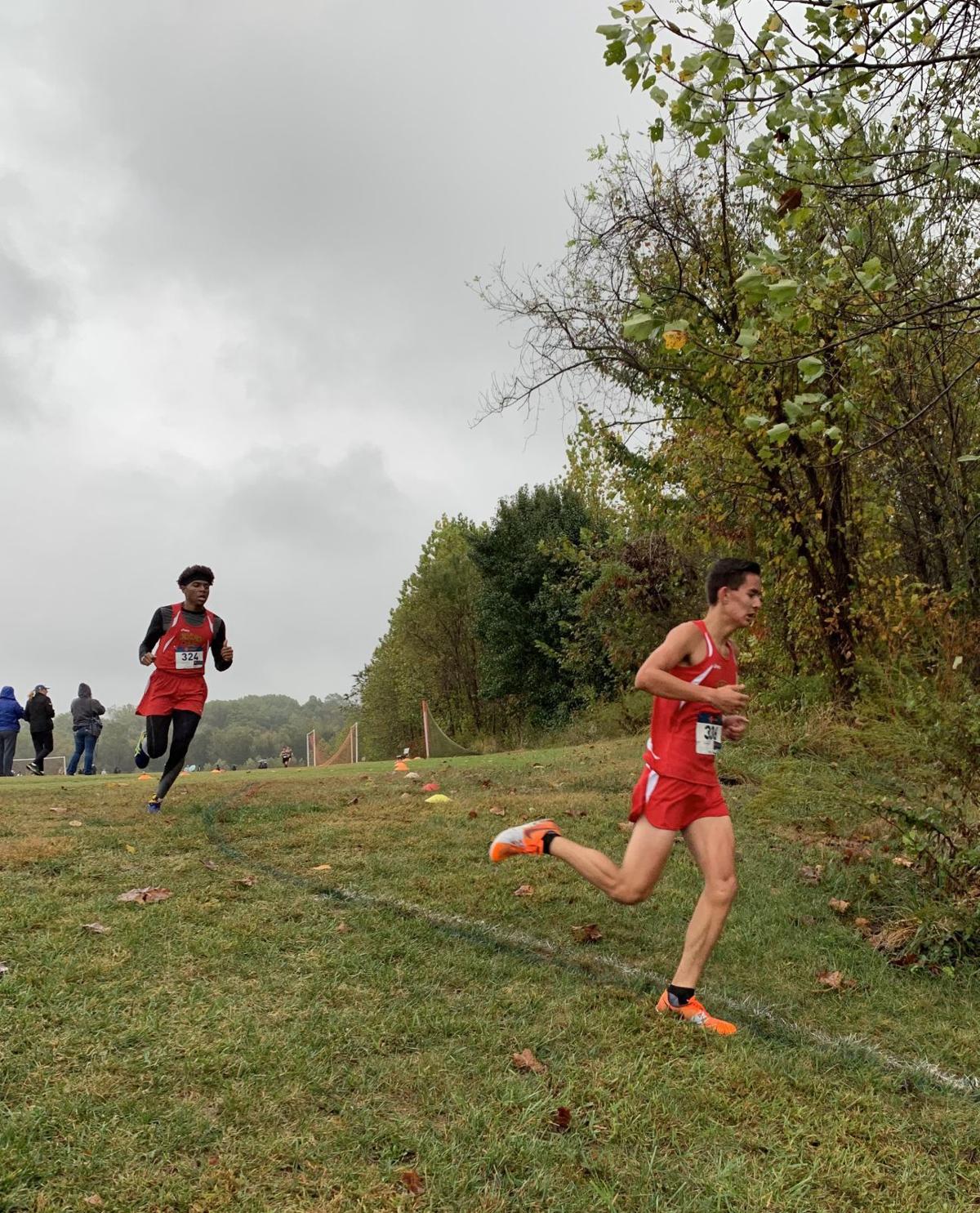 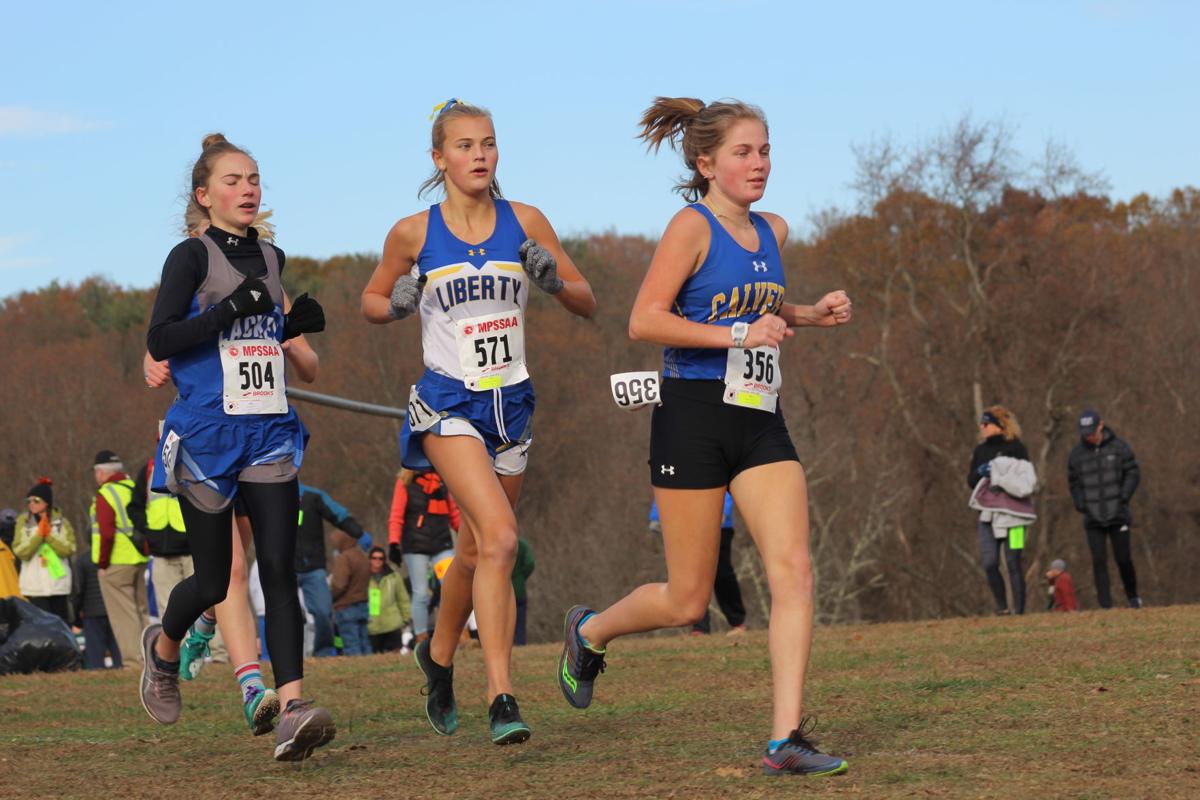 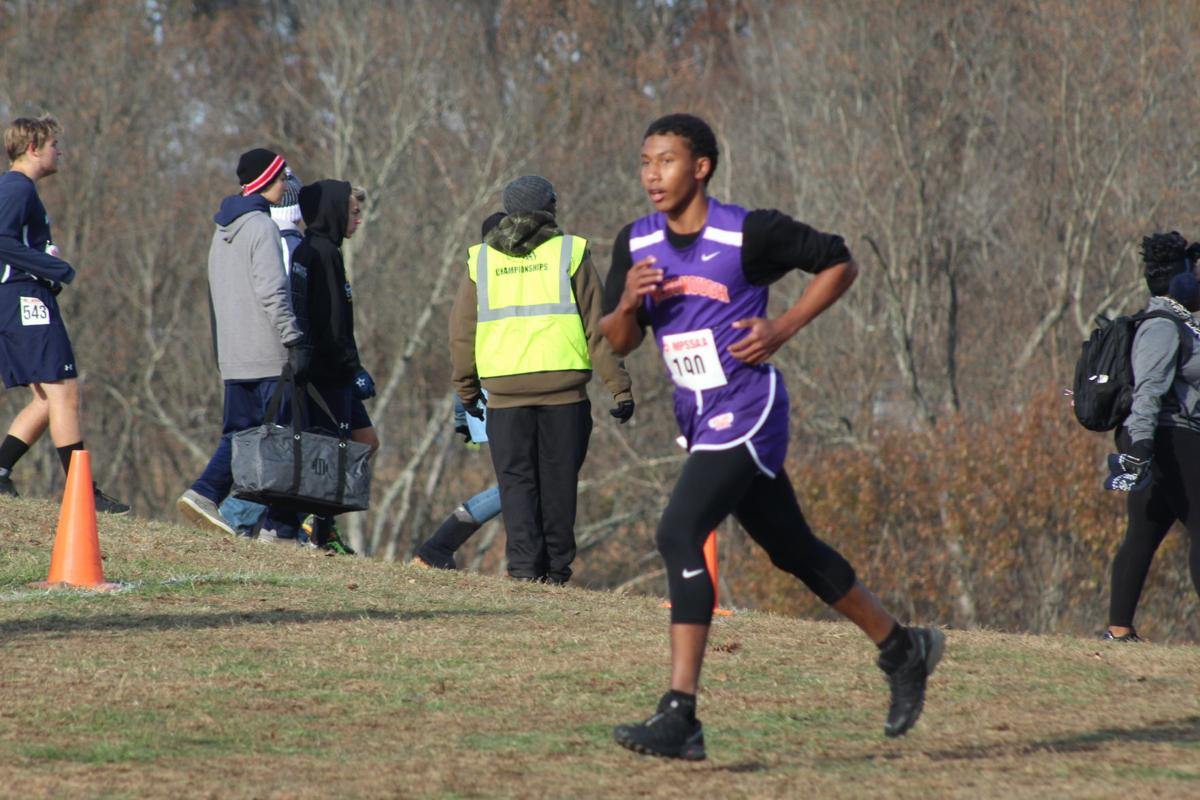 McDonough High School’s Namen Parker heads toward the final stages of the boys race in the Class 1A state championships on Saturday at Hereford High School. Parker finished 82nd overall while completing the three-mile course in 20 minutes 42.07 seconds, best among Rams runners. 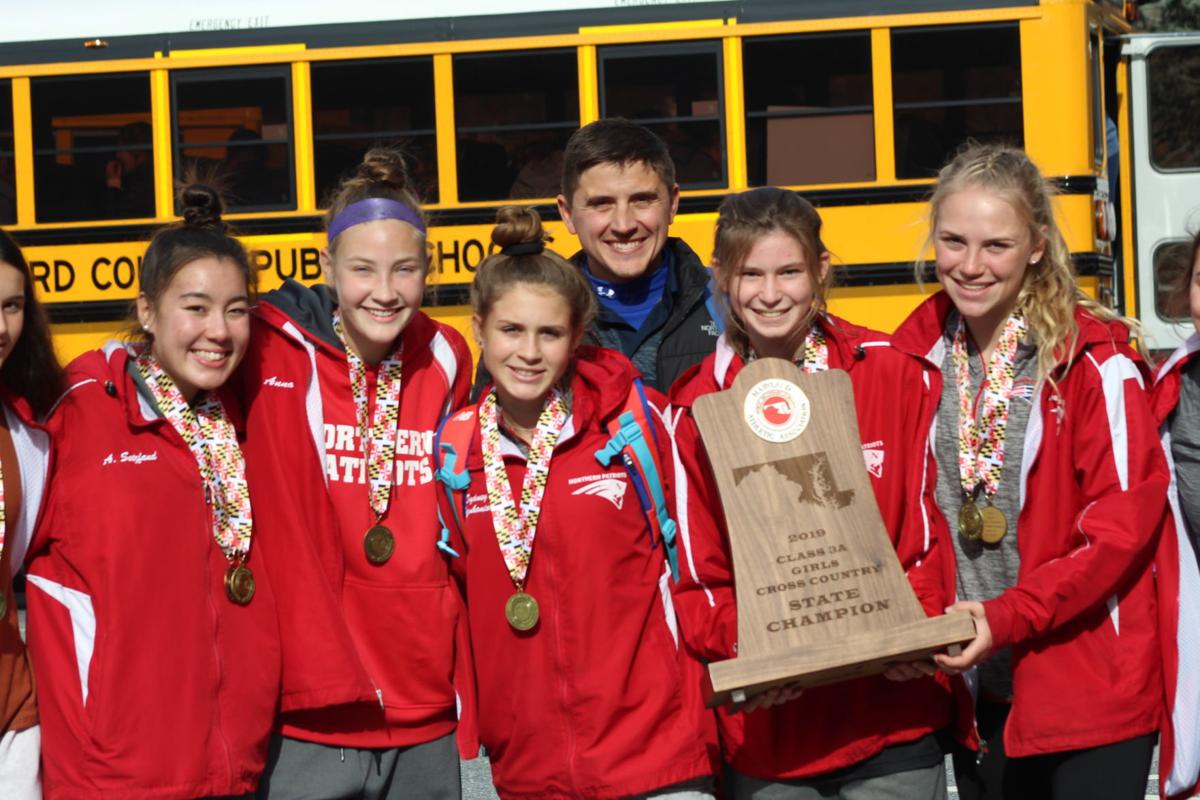 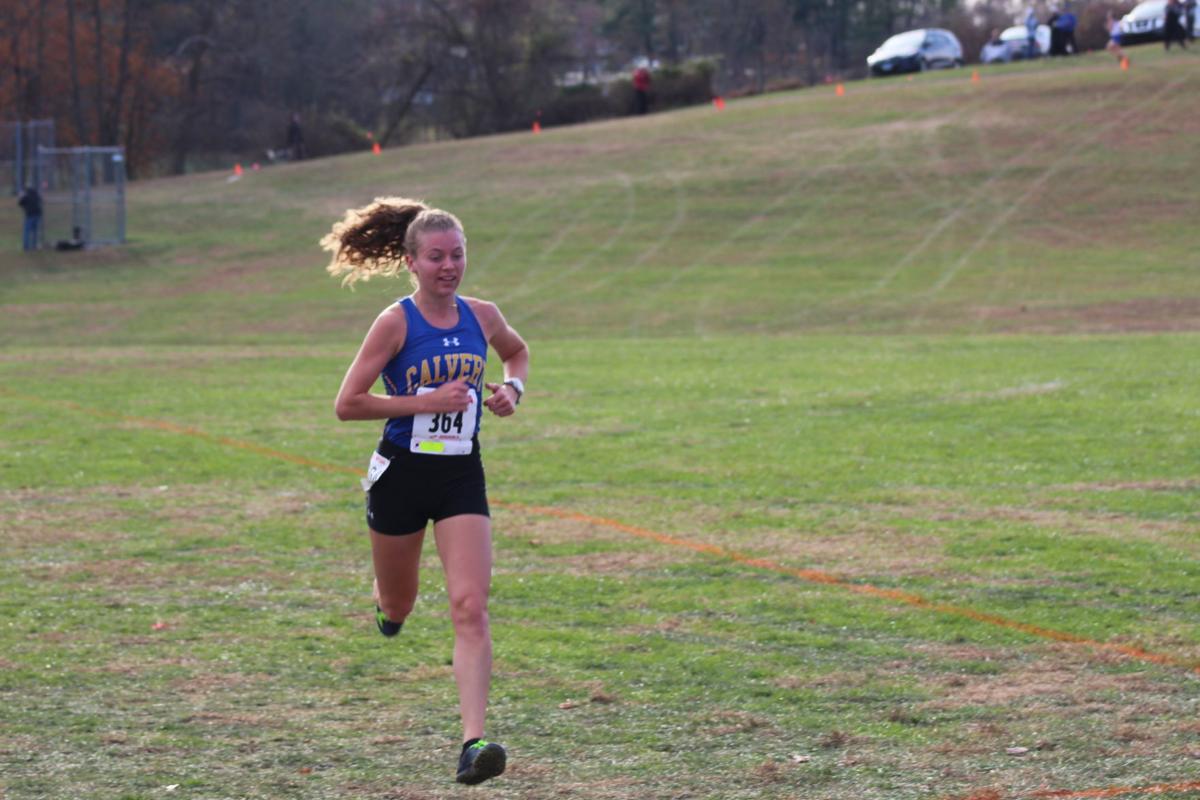 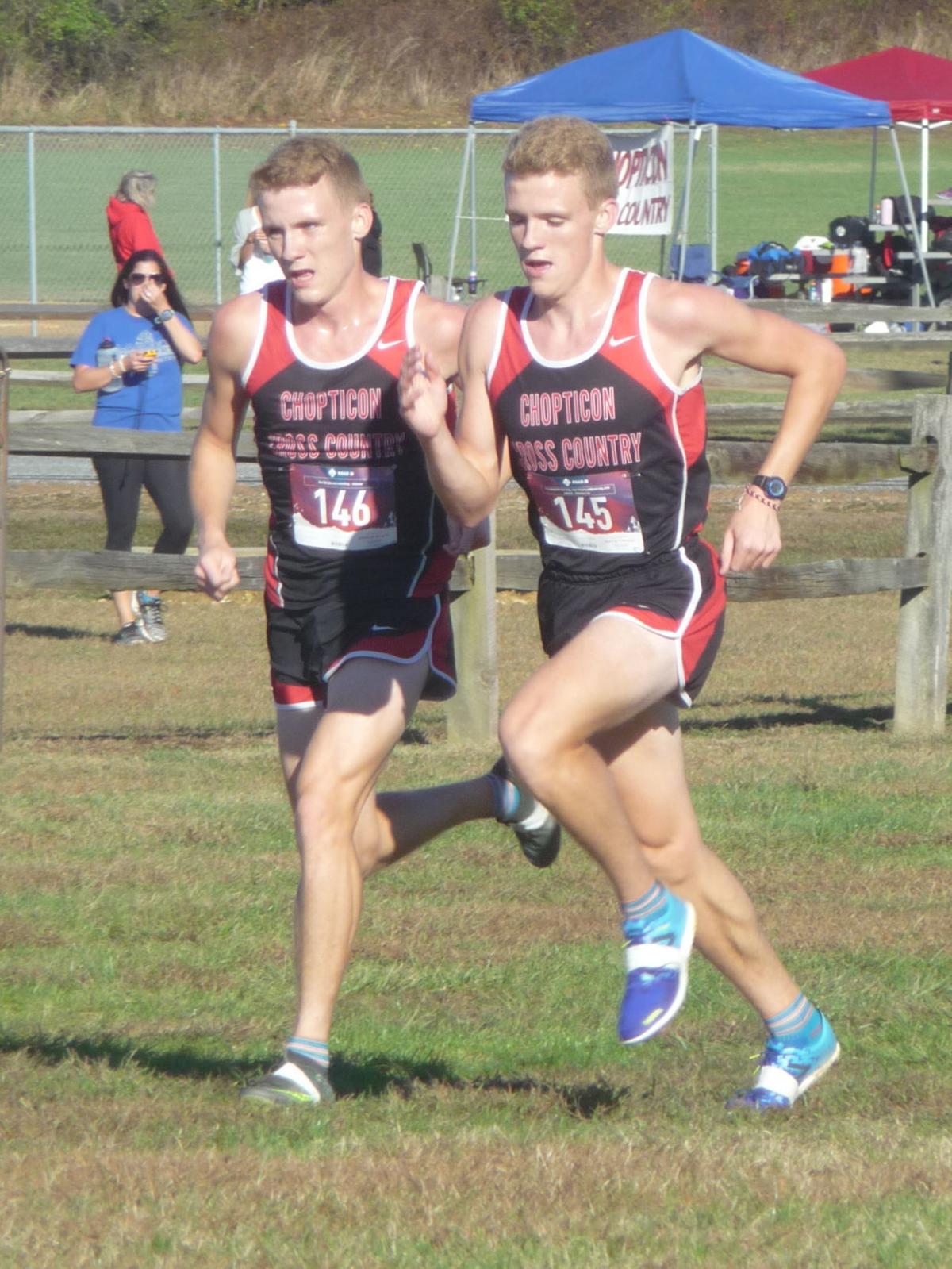 Chopticon’s Zach and Jeff Wedding, pictured here at the SMAC championships in October, place third and fifth, respectively, in the boys race at Saturday’s Class 3A state cross country championships on Saturday at Hereford High School. Zach finished in 16 minutes 8.54 seconds, while Jeff completed the three-mile course in 16:14.06.

McDonough High School’s Namen Parker heads toward the final stages of the boys race in the Class 1A state championships on Saturday at Hereford High School. Parker finished 82nd overall while completing the three-mile course in 20 minutes 42.07 seconds, best among Rams runners.

Chopticon’s Zach and Jeff Wedding, pictured here at the SMAC championships in October, place third and fifth, respectively, in the boys race at Saturday’s Class 3A state cross country championships on Saturday at Hereford High School. Zach finished in 16 minutes 8.54 seconds, while Jeff completed the three-mile course in 16:14.06.

PARKTON — Runners from the various Southern Maryland Athletic Conference squads who qualified for the state cross country championships at Hereford High School on Saturday were commendable of the cool, breezy conditions that enveloped the region.

Among the more complimentary of the elements, fittingly, was Northern High School junior Oakley Olson and her youthful, talented teammates who departed with the lion’s share of the trophies. Olson won her second straight 3A girls state title, covering the three-mile course in 18 minutes 49.23 seconds and the Patriots garnered their fourth consecutive team title with 82 points, four fewer than runner-up Bel Air of Harford County

“We all came up here thinking that it was going to be tough to beat Bel Air,” said Olson, who is still considering several colleges. “We really didn’t expect to come here and win the team title, but we kept pushing each other all week in practice to get better. I really felt good through all three miles today. When I came up that last hill I could hear my mom and coach [Josh Dawson, Northern head coach] cheering for me and I just pushed harder.”

Northern sophomore Hannah Mack finished 10th (19:49.85) and then she and Olson focused their attention on cheering for their remaining teammates on the course to place as high as they could. Abby Setzfand finished 18th (20:32.36), while Anna Finn was 29th, Julia Devine was 34th and Roni Dolan rallied late to get 43rd.

“We heard that Bel Air was the team to beat, so we were watching their runners and cheering for our girls to go past them,” Mack said. “Roni passed three Bel Air runners in the last portion of the race. That really made the difference. She was our sixth girl to score and passing those last three Bel Air girls allowed us to win the team title.”

Mack had missed a good portion of the season with an injury and Sydney Yankanich, one of the Patriots’ top runners, was sidelined with an injury for the postseason meets. So heading into the state championships, Northern coach Josh Dawson had scaled back his expectations slightly and perhaps relished the 2019 team title with more zeal than in previous years.

“This is a young team,” Dawson said. “We have everyone back next year. But we had some injuries this year and we hoped to come up here and win another team title, but it wasn’t really expected. So this one meant a lot. Oakley ran tremendously today and the other girls all gave me everything they had and that’s what it takes to win a team state title.”

“I thought the conditions were pretty good today,” Jeff Wedding said. “It was a little cool, but the wind wasn’t bad. Coming up that last hill I felt pretty good. It was a good way to end the season.”

“Actually, I thought conditions were ideal for running today,” McGirr said. “It wasn’t as cold as it has been in the past and the winds had died down. It was a great way to end my senior season of cross country. We had a very close-knit group of guys on the team this year and that made it really fun.”

“I really felt pretty strong the last mile,” O’Brien said. “It wasn’t real cold or windy, so it wasn’t tough getting up those last couple of hills. Now I’m really looking forward to the indoor season. I think our 3,200 relay is going to be really good during indoor and outdoor.”

The afternoon session featured 1A and 2A races. In 2A, runners from Calvert, Patuxent and Lackey all performed admirably. Calvert’s girls finished fourth overall (121) led by Dana Miller placing fourth after completing the course in 19:37.48 and Kristen Prince taking 10th (20:26.73).

“I really felt pretty good at the end,” Miller said. “The course has a lot of hills, but you know what to expect the second time around. The winds were not as bad today. Overall, we had a really good season.”

Lackey senior Annie Landgraf finished 46th in her final high school cross country meet and has already begun looking forward to her final outdoor track and field season next spring after competing for the Chargers swim team this winter.

“I finished right around my seed time and I finished in the top 50 for the third time in four years,” Landgraf said. “I was definitely happy with the way that I ran today. The course has some tough hills, but it wasn’t that cold or windy. It was good way to end my final cross country season.”

McDonough competed in the 1A races with the boys taking 15th overall and Asharia Matthews being the only girl to compete for the Rams, taking 67th.