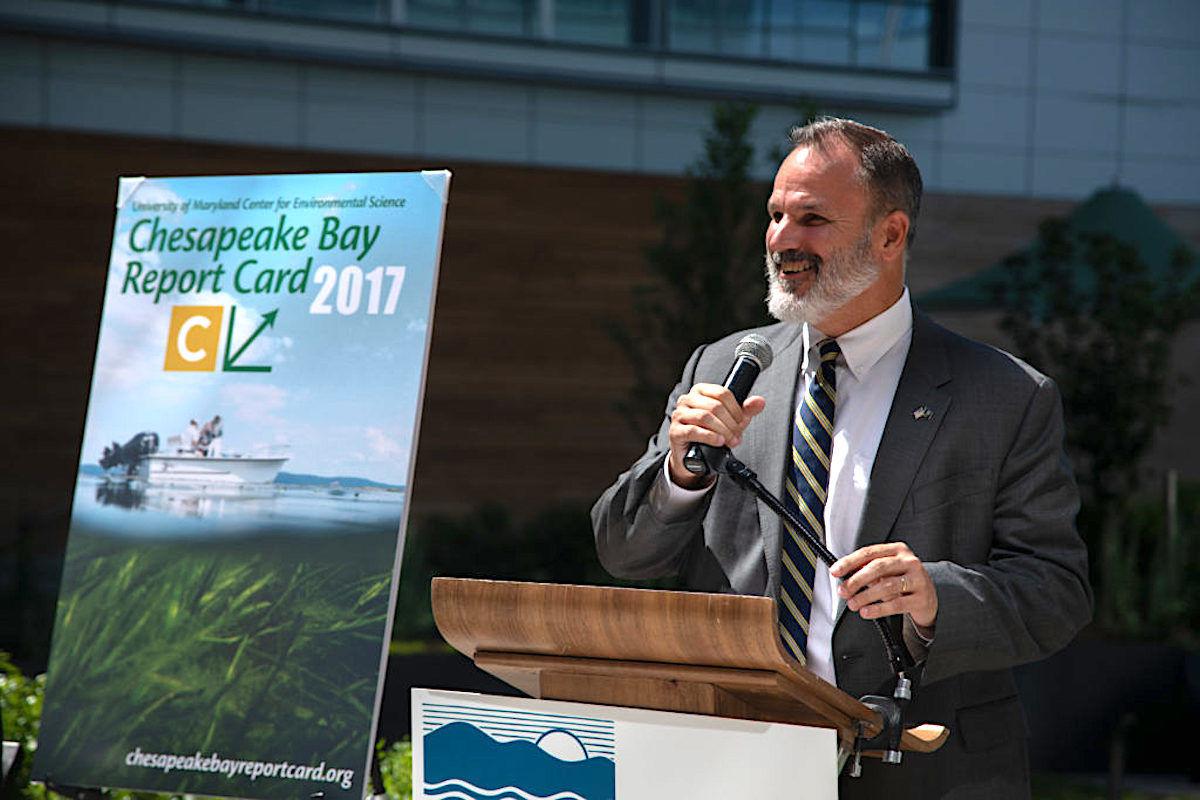 Charles County Administrator Mark Belton was elected to the board of directors for Chesapeake Conservancy last year. He is leading the county’s efforts on climate change. 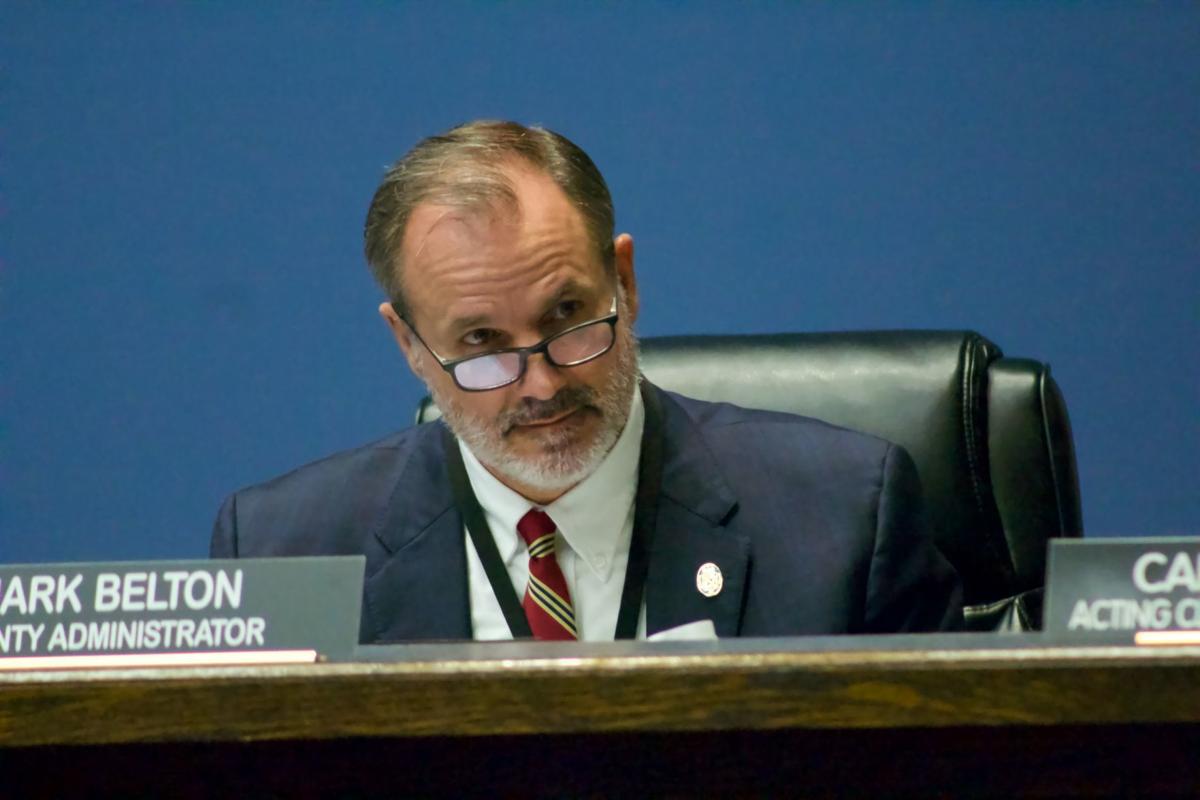 Charles County Administrator Mark J. Belton said that the county government’s participation in a resiliency planning and financing program recently launched by the University of Maryland’s Center for Global Sustainability will help identify critical assets that need to be protected against natural disasters that are triggered or made more severe by the effects of climate change.

Charles County Administrator Mark Belton was elected to the board of directors for Chesapeake Conservancy last year. He is leading the county’s efforts on climate change.

Charles County Administrator Mark J. Belton said that the county government’s participation in a resiliency planning and financing program recently launched by the University of Maryland’s Center for Global Sustainability will help identify critical assets that need to be protected against natural disasters that are triggered or made more severe by the effects of climate change.

Charles County administrator Mark Belton joined up with a coalition of other county and municipality leaders from across the state Wednesday in Annapolis for a joint discussion on ways Maryland communities can steel themselves now against the effects of climate change.

“Charles County has been at the forefront of climate resilience efforts,” said Commissioners’ President Reuben B. Collins II (D) in a Wednesday press release. “We have taken important steps to preserve land and protect our natural and water resources. We are embracing partnerships with our community and collaboration with other county leaders, because our collective efforts will be essential to help us mitigate the impacts of climate change in the future.”

Belton, in a follow-up phone interview on Thursday morning, shared more detail about Wednesday’s event, which he said was the culmination of phase one of a two-pronged project that has been in the works for several months now.

In October, the Maryland Independent reported that Charles County had been selected, along with Anne Arundel and Queen Anne’s counties, to collaborate with the University of Maryland’s Center for Global Sustainability through the “Resiliency Planning and Financing for Maryland Counties” program, which aims to help develop strategies to provide customized plans to ensure that the three counties can weather any storm, both literally and figuratively. These plans are intended to help localities bounce back after the severe storms and natural disasters that are expected to worsen as the effects of climate change become more pronounced.

Belton said Thursday the subject of climate change is “one I feel very strongly about and have a passion for,” and that working against its harsher effects is a priority. He characterized the first phase of the project in his October interview as similar to “a risk assessment,” and that he and county government staff would be working to identify the county’s most critical assets. Phase two, he said, will be about securing funding for projects to protect them.

In Annapolis Wednesday, Belton joined a roster of speakers that included Maryland State Treasurer Nancy Kopp, Secretary of the Environment Ben Grumbles and other state and local leaders. Belton’s presentation focused on the community education and engagement aspect of resiliency planning. Kopp’s remarks, Belton said, were “really important for Charles County in particular.”

As the state treasurer, she goes to the bond markets and bond hearings for projects for the state, Belton explained, and said Kopp recalled how at one such event, a bond rating agency had been asking about the state’s measures to protect against climate change.

“If you’re going to be building projects that you want to last for decades or 50-100 years, you need to have them able to withstand the effects of climate change as it’s going to be then, not necessarily what we expect it to be looking at history from 20, 30 or 40 years ago,” Belton said. “That’s something ratings agencies are looking very hard at when municipalities, counties and states go to them for bond ratings. Then [Kopp] pointed out how she had seen in Charles County’s most recent bond rating from Standard & Poor, where they reaffirmed our triple A rating, it called out the fact that our climate change program, which holistically addresses it … had factored into our triple A rating. That was really a proud moment for Charles County, I think, for the state treasurer to call us out in a group setting like that.”

The collaborative nature of the program, Belton said, is one of its strengths as well as something that will likely help elected and local officials as they work to formulate plans of their own.

“It was really great to see so many folks working together,” Belton said. “I think that was the strength of this project. Not only putting our own team together in Charles County … but to do it in collaboration with two other counties that are different, yet have similar problems. We can combine our expertise and ideas and efforts moving forward.”

Belton said he also used his platform to boast a bit about Charles County and its government staff members who participated in phase one of the program.

“I bragged on us a little bit. The other counties and [Annapolis] talked about what they’ve done, but we’ve had better results than them in a couple of areas and I was proud to point that out and make my whole team stand up and have everyone clap,” Belton said. “It was a lot of work for our employees who were in this workgroup, and it’s not like we took away their normal daily responsibilities for them to do it. I was real proud of the work they put in and the product at the end of the day.”

Of the four-pronged approach they’ve taken to addressing climate change — “mitigation, adaptation, building capacity and telling our story through public education,” Belton said —county staff have gone above and beyond embracing the education aspect, even those not in this workgroup. Charles County has had more people graduate from the state Climate Leadership Academy program than any other county, Belton said, which is a strong indicator of potential future success.

“It means our folks are not only thirsty for that knowledge and want that training, but it means we’re going to be in good stead as we plan and build projects for the future,” Belton said.

Public education efforts in the county have been successful as well, he said, and have included putting out two episodes of the county government podcast focused on the topic: One on the science of it, Belton said, and a second on adaptation measures. Those episodes — which Belton said feature appearances from state figures ranging from Treasurer Kopp and Secretary Grumbles to Gov. Larry Hogan (R) — could serve as a way for those who make the notoriously long commute out of the county every day for work to get a quick education on the matter while en route.

The success of Wednesday’s meeting, Belton said, is encouraging as they begin looking for ways to pay for what they hope to achieve. Belton said he’s looking forward to continuing to work with the University of Maryland and the other counties, as well as finding more ways for Charles County to participate.

In addition to increasing public relations efforts around the topic as they move forward, Belton specifically noted a project with a company called Energy Ventures that the county is currently working on as one of the ways they’re working to be the change. They’re giving the private company land on which to install solar panels, Belton said, and then in turn will buy the electricity produced back at a reduced rate.

“We’ll be able to show folks in our county that we’re leading by example here and be able to say that 100% of the energy used by your county government is generated locally and through renewable sources,” Belton said. “I think it’ll be really cool when we get to that point to be able to tout that.”

“I think we’re in line with state efforts to make progress … to adapt to whatever changes come our way,” Belton said.