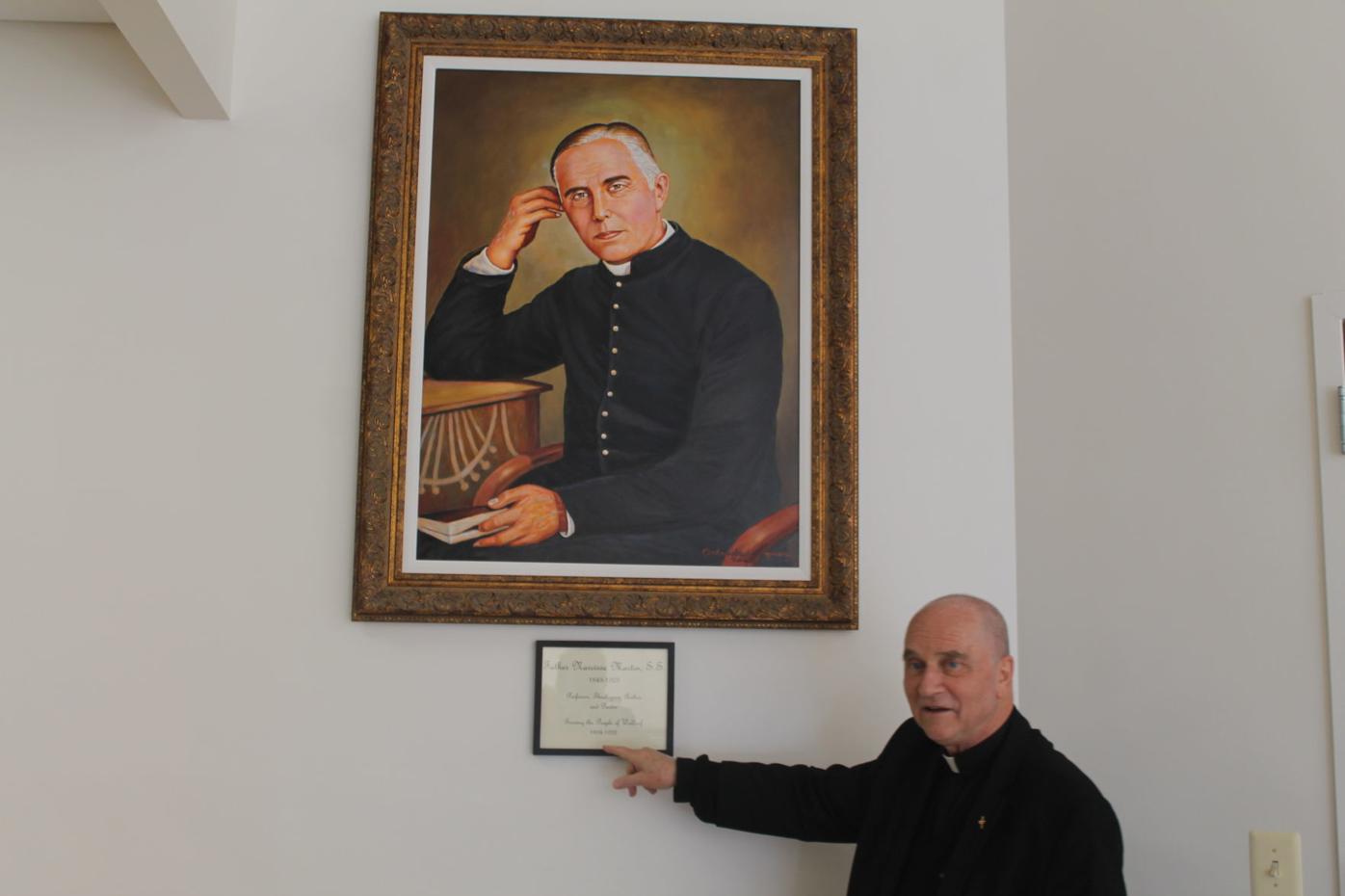 The Rev. Alain Colliou of Our Lady Help of Christians Catholic Church stands next to a portrait of the Rev. Narcisse Martin, who ministered to the Catholic community in and around Waldorf from 1894 to 1923. The church recently rededicated its hall the Father Narcisse Martin Hall. 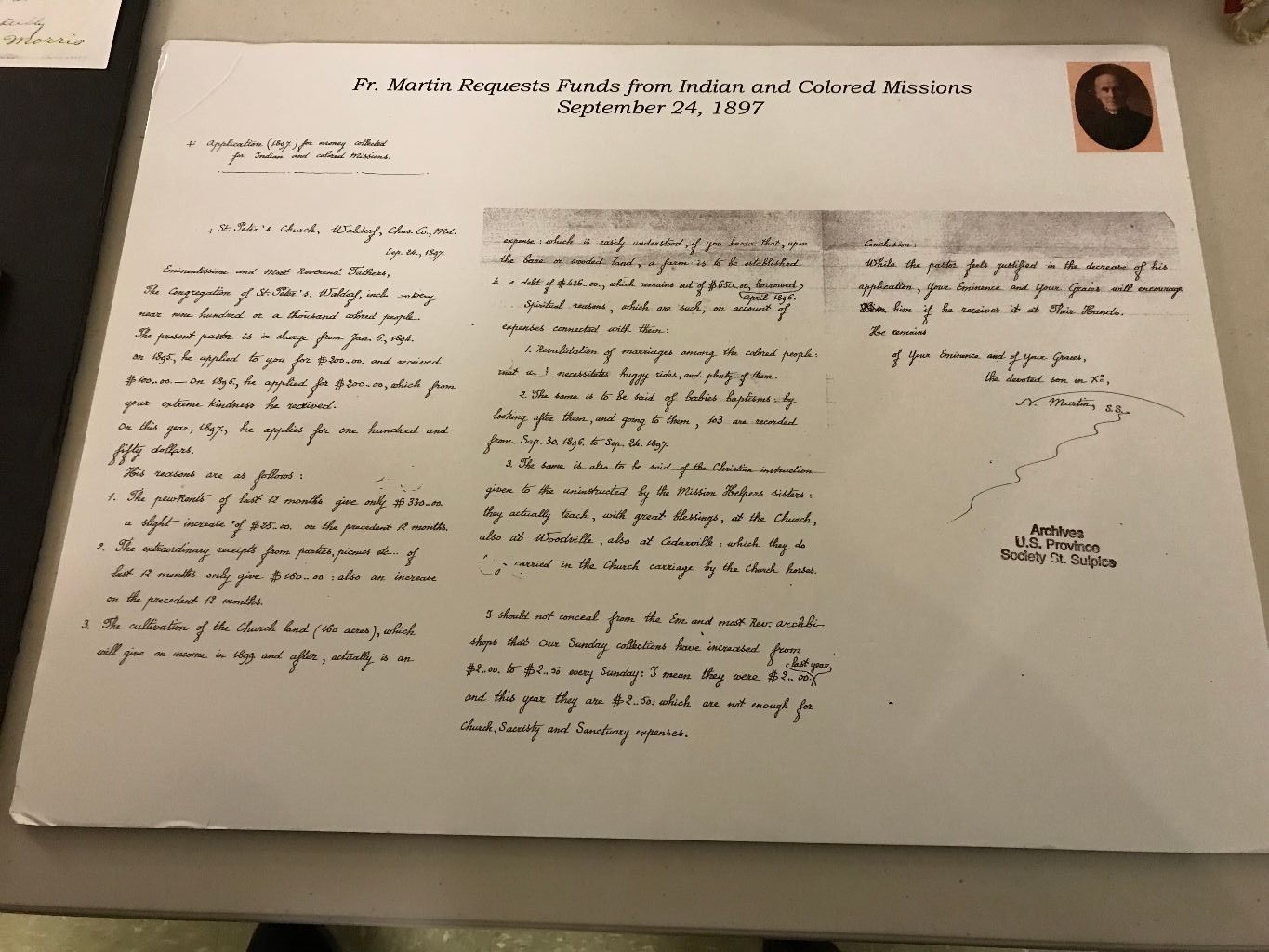 Framed copy of a letter by the Rev. Narcisse Martin, dated Sept. 24, 1897, requesting funds to support missions to the local Native American and African-American communities.

The Rev. Alain Colliou of Our Lady Help of Christians Catholic Church stands next to a portrait of the Rev. Narcisse Martin, who ministered to the Catholic community in and around Waldorf from 1894 to 1923. The church recently rededicated its hall the Father Narcisse Martin Hall.

Framed copy of a letter by the Rev. Narcisse Martin, dated Sept. 24, 1897, requesting funds to support missions to the local Native American and African-American communities.

The Father Martin Society is hoping to keep alive the memory of the early 20th century pastor by keeping active his legacy to the Catholic community in and around Waldorf and helping to share his story.

“While this is about one man, it’s really about more than that. It’s about the things he stood for, which ultimately gets back to what we feel is part of our Christian responsibility to promulgate God’s love for everyone,” said Sandy McGraw, a parishioner at St. Peter’s Catholic Church and member of the Father Martin Society.

Last month, the community hall at Our Lady Help of Christians Catholic Church was renamed the Father Narcisse Martin Hall, and a portrait of the pastor now hangs in the hall, the work of artist Orlando S. Lagman.

The Father Martin Society dates back to Aug. 28, 2009, and it’s creation by the Rev. J. Wilfrid Parent and Rev. Alain Colliou, but the story of the discovery of Martin’s role in the local community dates back over 100 years.

A legacy of service

McGraw said Martin, already a noted theologian, came to teach at St. Mary’s Seminary in Baltimore in 1882. After three years there, he asked to be assigned as chaplain to the poor at St. Agnes Hospital in Baltimore.

Nine years later, in 1894, Martin requested a transfer to St. Peter’s Parish in Charles County, giving up the comfort of the seminary.

“He was a theologian, he was a professor, he was an author,” McGraw said. “He was a Sulpician, and the [Society of the Priests of Saint Sulpice] is a teaching order that prepares seminarians to become priests, so it was our view, he wanted to, for whatever reason, we think it was the Holy Spirit, get back to serving God through serving parishioners.”

“It was a huge parish,” McGraw said.

“At the time, St. Peter’s was terribly run down,” McGraw said. “It was basically a run down farm. It had had a series of administrators, but it had not had a pastor that was there for any period of time for quite a few years.”

“It was a mess. The fences were down, the barns were dilapidated; there were stray animals around. It was, not uninhabitable, but the next best thing,” McGraw said.

McGraw said the congregation was primarily made up of Piscataway Native Americans, freed African-American tenant farmers and white farmers.

“It wasn’t exactly a robust parish in terms of income,” McGraw said. “So he started putting his own money into the parish. He never took a salary … He built a new rectory, a few years after he got there, that is still in use today. It has now been dedicated the Father Martin House.”

McGraw said that Martin was dedicated to seeing the sacraments were served.

“If he found out that one of his parishioners had had a baby, he didn’t wait for them to contact him. He would go out to their house, knock on the door and say, ‘Get the baby, let’s get the child baptized,’” McGraw said. “Legend has it that he would go into a tobacco field or a bedroom to find couples who were co-habitating and marry them on the spot, and in fact, we have references in some of his letters to often marrying people in front of their children.”

“What I learned about him was he had a zeal to not only baptize people but evangelize them, to make sure that people who wanted to be baptized could continue to deepen their faith,” said Colliou, who is now the pastor at Our Lady Help of Christians.

“Roughly 80 percent of people he was baptizing were African-American or native Indians, also a large number of immigrants from Germany, Austria and German-speaking Alsace,” Colliou added.

Martin remained the pastor at St. Peter’s for 29 years, until his death in 1923 at the age of 78, two days after holding Mass.

McGraw’s introduction to Martin came while researching St. Peter’s history in 2000, for the church’s 300th anniversary. McGraw was assigned the period of time corresponding with Martin’s time at St. Peter’s.

During her research, she came across a letter written to the church in 1989 by a French historian from Martin’s birthplace, Air-sur-la-Lys in northern France, researching Martin’s life in the United States.

Colliou arrived at St. Peter’s in 2008 as a summer seminarian. Parent assigned Colliou, a native of France, the task of answering the letter 19 years later.

“The letter had a telephone number so I called,” Colliou said. “There was no answer, but I never take no for an answer, so I kept calling, and finally, a gentleman picked up the phone, so I spoke to him in French, and I asked if I could speak with Madame [Agnes] Maillard, I’m a French seminarian in Waldorf and I want to talk to her about Father Martin. I could hear him shouting to his wife, in French, ‘Come, we have somebody speaking French from Waldorf.’ So that was how it started.”

From Maillard, Colliou was able to learn a great deal about Martin’s early life.

Colliou and McGraw also interviewed people who remembered Martin from their childhood or had been told stories about him.

“He had died in 1923, and in 2008, so many years later, so many people remembered him, because he had baptized so many people,” Colliou said. “I met many people whose grandparents have been married by Father Martin, or who were baptized by him, and remember him through their families’ stories.”

In the course of their research, McGraw and Colliou discovered Martin had written a treatise on the sacrament.

“We assumed [the treatise] was written in French; come to find out it was written in Latin. But no one had a copy; nobody knew anything about it. So we decided we were going to find it,” McGraw said.

After much searching, the treatise was found at St. Mary’s Seminary, where it had been misfiled.

McGraw said they published the research into Martin in the St. Peter’s bulletin.

“If you study Father Martin and the things that he stood for and you read his writings, you know that what was most important to him was the Eucharist, the body of Christ. He also was dedicated to the priesthood, by virtue of the fact that he was a Sulpician. And we also knew that he was very committed to intercultural unity; he was especially mindful of the needs of the African-American community and the Native American community,” McGraw said.

McGraw said the Father Martin Society was created to promote the things that he stood for, particularly multiculturalism.

“When do we need intercultural unity more than we need it right now?” McGraw said.

The group has formed connections with the Catholic church community in Martin’s native Air-sur-la-Lys, which has now placed a placard on Martin’s birthplace.

Since its foundation, the nonprofit Father Martin Society has renamed and dedicated the old St. Peter’s rectory as the Father Martin House and sponsored pilgrimages to Martin’s birthplace in France.

The Father Martin Society also sponsors scholarships to St. Peter’s School and Our Lady Help of Christians’ preschool. McGraw said she would also like to see more effort to promote the history of Catholicism in the U.S.

Membership in the Father Martin Society is open to Catholics of all parishes. The Society meets four times a year, with special events throughout the year. For more information, email fathermartinsociety@gmail.com.