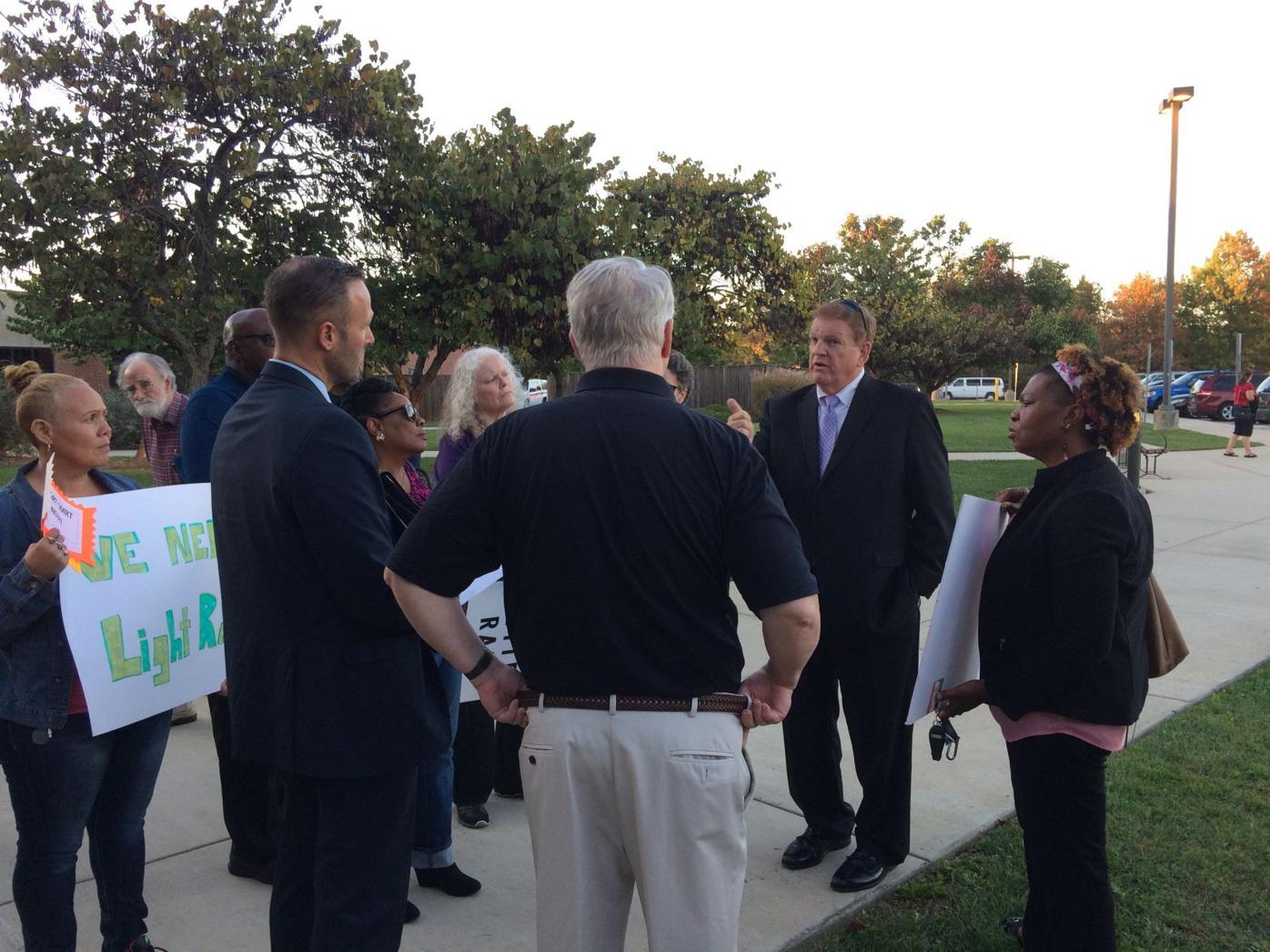 Maryland Transportation Secretary Pete K. Rahn, second from right, spoke with supporters of the proposed light rail line prior to his annual briefing on the state’s transportation priorities before the county commissioners and state delegation on Tuesday. 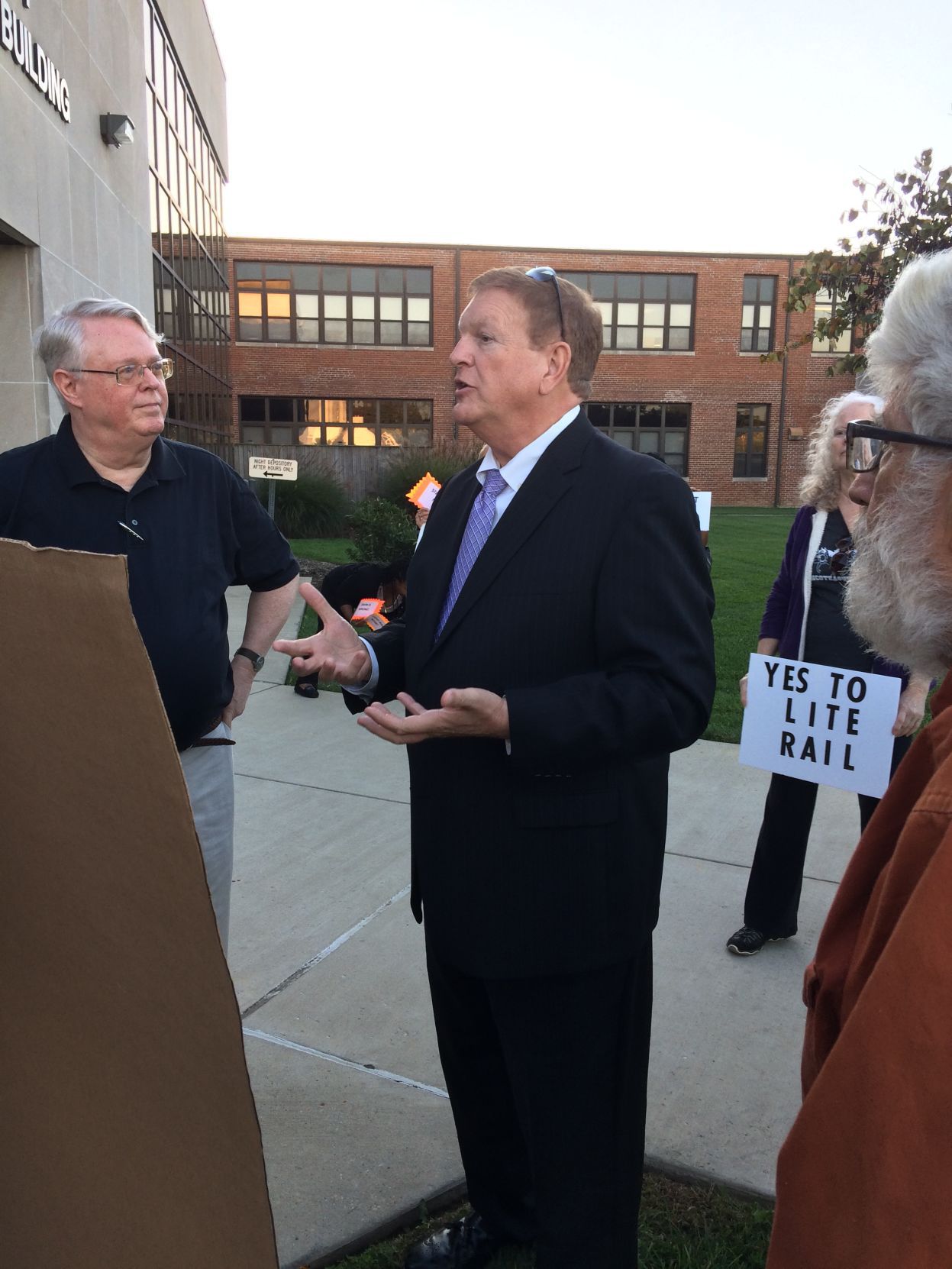 Maryland Transportation Secretary Pete K. Rahn, center, explains to Gary V. Hodge of the Southern Maryland Alliance for Rapid Transit, left, and Marc Imlay of the Sierra Club, right, why funding for environmental and engineerings studies for the proposed Charles County light rail project was zeroed out in the state’s six-year transportation budget. 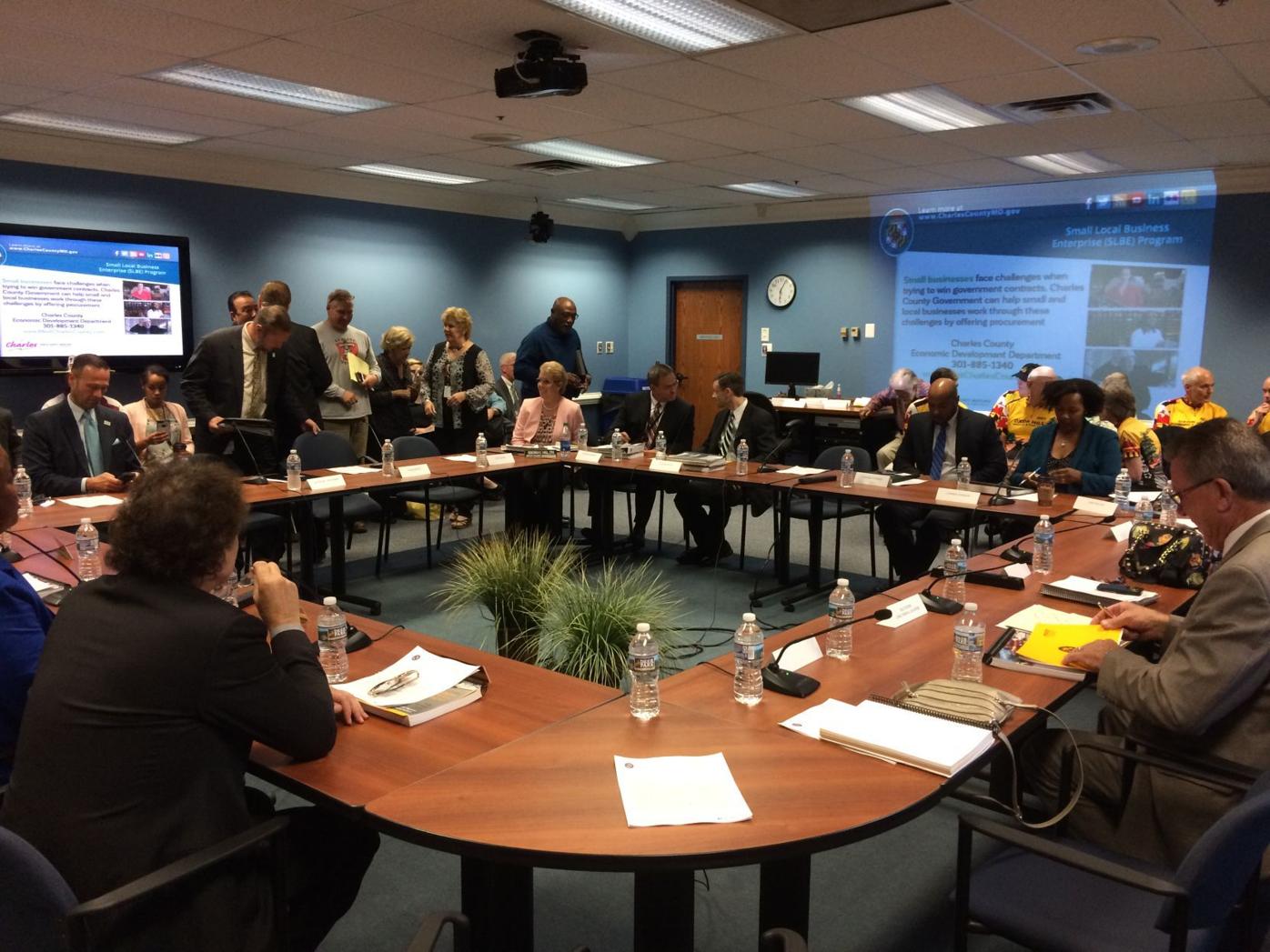 Maryland Transportation Secretary Pete K. Rahn, second from right, spoke with supporters of the proposed light rail line prior to his annual briefing on the state’s transportation priorities before the county commissioners and state delegation on Tuesday.

Maryland Transportation Secretary Pete K. Rahn, center, explains to Gary V. Hodge of the Southern Maryland Alliance for Rapid Transit, left, and Marc Imlay of the Sierra Club, right, why funding for environmental and engineerings studies for the proposed Charles County light rail project was zeroed out in the state’s six-year transportation budget.

Support for funding the next phase of the Southern Maryland Rapid Transit Study and for restoring the bike and pedestrian lane to the new Gov. Harry W. Nice Memorial Bridge project was on prominent display Tuesday night as Maryland Transportation Secretary Pete K. Rahn briefed citizens and elected officials on the state’s transportation plans.

Rahn spoke with demonstrators outside the Charles County government building who support construction of a light rail line along a 19-mile corridor that would parallel Route 5 and U.S. 301 from the Branch Avenue Metro station in Prince George’s County to the Waldorf-White Plains area.

The crowd included representatives of the Sierra Club and the Oxon Hill Bicycle and Trail Club as well as private citizens.

“This is the right moment to start the formal planning process because windows will begin to close on this vision the longer we delay,” said Gary V. Hodge, a longtime advocate for a light rail system and a former county commissioner. “It’s probably a 12-year process from the day we start project planning to the completion of the project.”

“Having the state accept this project into the Consolidated Transportation Program will enable us to move through the process,” Hodge said.

The state’s transportation program allocates $14.5 billion over six years to projects all across the state. Rahn is traveling to each of the state’s 23 counties and Baltimore City to explain how the plan serves each of those areas.

In May, the Maryland Transit Administration issued the final report in its three-year SMRT Study. The report summarizes options for bus and rail rapid transit along that corridor.

According to the report, a rapid transit system would allow the county’s transportation network to keep pace with proposed residential and commercial development through 2040 and reduce commute times to and from the Washington, D.C., metropolitan area by up to 24 minutes.

The report found that light rail could be expanded more easily than bus transit to meet increased ridership. While the overall costs for a bus system would likely be $500 million less than for rail, the annual operating costs of light rail would be lower by approximately $10 million.

However, the state’s capital budget for transportation projects through the 2023 fiscal year suspends work on the project for six years, withholding $27 million to fund initial project planning activities.

Rahn has expressed his preference for the bus rapid transit option.

Rahn’s argument that there was no point funding environmental and engineering studies for light rail without first knowing where the funding for the entire project would come from was met with disbelief by demonstrators, as did his suggestion that a need for the system had not been demonstrated.

“So we get nothing,” said Matt Wills of Bryantown. “We can’t get buses and we can’t get light rail. We’ve been trying for decades.”

The conference room where the two-hour briefing took place was standing-room only. Demonstrators sitting opposite Rahn displayed their signs throughout the meeting.

Rahn explained that the Hogan administration is investing $14.7 billion over six years to improve roads, transit and infrastructure around the state. Investments in Charles County will include $3.85 million for the VanGO bus system, $11 million for road resurfacing and $85,000 for the Charles County Sheriff’s Office and the La Plata Police Department.

He noted that the construction of a new bridge on Budds Creek Road over Gilbert Run Swamp and the installation of a new deck on the Route 6 bridge over Zekiah Swamp Run are part of a comprehensive plan to renovate or rebuild all 69 bridges in the state that have been identified as structurally deficient.

Elected officials took turns pressing Rahn to restore funding for the light rail project planning, emphasizing that traffic congestion in Charles County is among the worst in the nation and is “stifling” development in surrounding counties.

“We haven’t had any transportation infrastructure improvement in the last 20 years but we’re a fast growing county,” Middleton said. “Given the fact that we are so congested here, it seems like we’re not being responded to.”

“We’ve stood up and took the hard votes to get some of these projects underway, and I see them being pushed back, and that does not bode well,” Middleton said. “The advance planning needs to be moved to the front burner.”

Rahn pointed out that revenue from the gas tax increase, which Middleton and others had supported, actually declined two years ago and was flat last year, which affected projects that relied on funds from the tax.

Groth challenged Rahn’s argument that funding sources for constructing either a bus or light rail system needed to be identified before planning studies could be undertaken.

“The purpose of the [environmental study] process is for determining funding sources,” Groth said. “There’s no point in trying to identify funding sources at this phase.”

“Let’s take this to the next level,” Groth said to applause from the audience. “We’re not making the big ask yet.”

Following the briefing, when asked about how the deadlock could be broken, Rahn said that a regional funding plan is needed.

“It can’t just be that somebody else needs to pay for it,” Rahn said. “Given the talk that’s going on in Congress, we’re as likely to lose a portion of federal funds as we are to gain a portion.”

“Before we put $27 million into the [environmental] study, we ought to have an idea that the project is viable,” Rahn said. “Without some concept of how it’s going to be paid for, all we’re going to do is spend the money and then it’s going to sit on the shelf.”