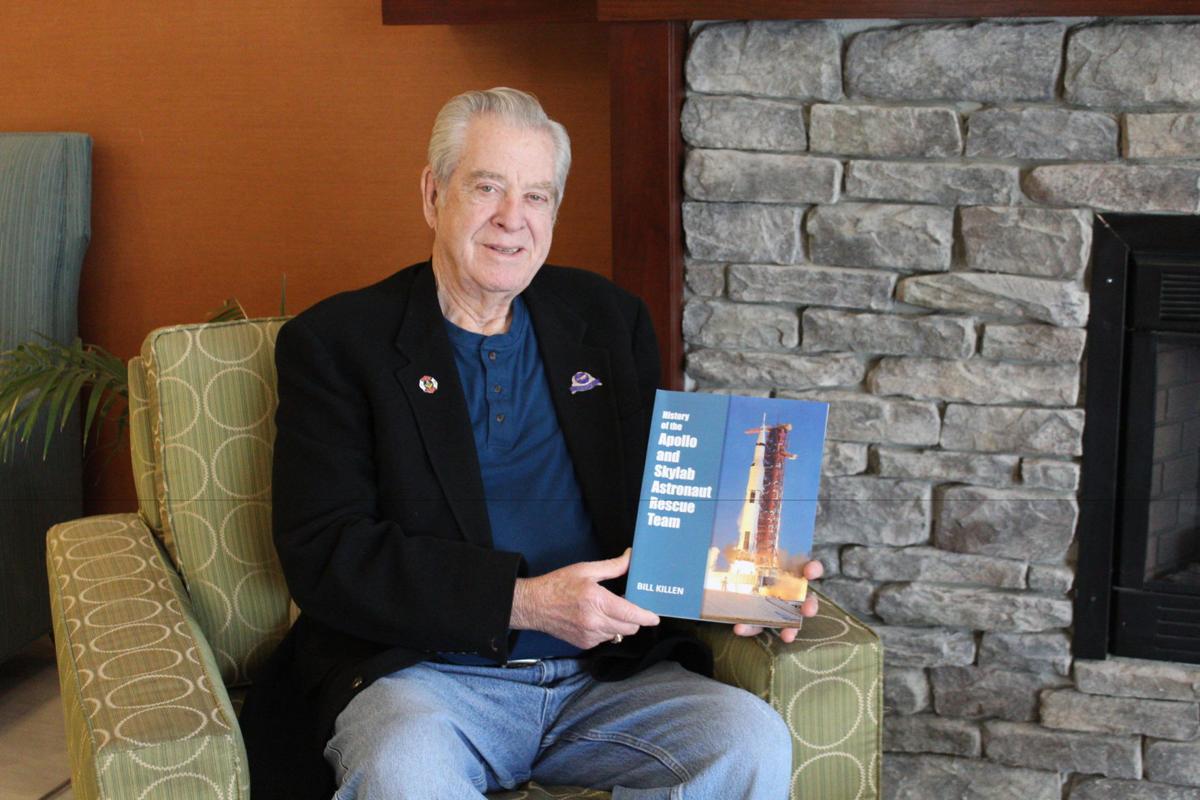 Bill Killen holds a copy of his new book, “History of the Apollo and Skylab Astronaut Rescue Team.” Charles County native Killen, who spent a career working in the fire service that began locally, was one of 48 firefighters at Kennedy Space Center in Florida selected to serve on the highly specialized team. 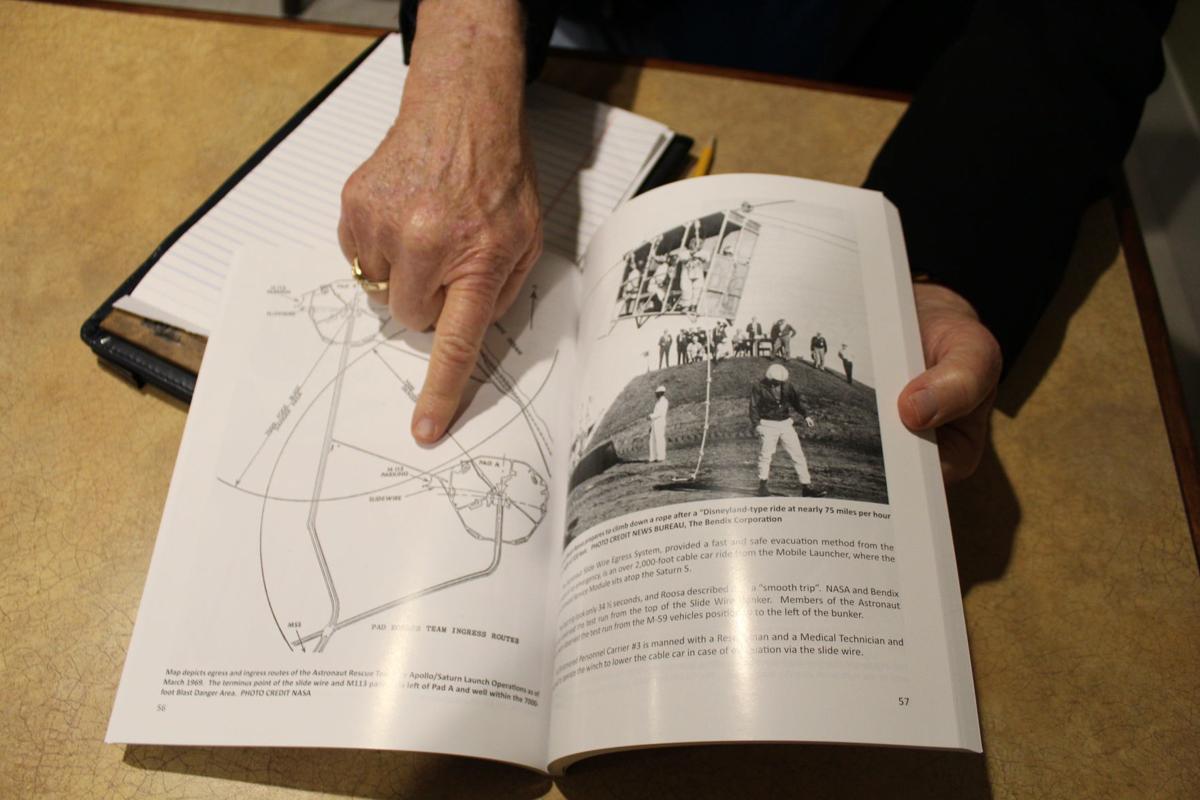 Bill Killen explains an illustration in his new book, “History of the Apollo and Skylab Astronaut Rescue Team.” County native Killen, who spent his career working in the fire service, was one of 48 firefighters at Kennedy Space Center in Florida selected to serve on the highly specialized team.

Bill Killen holds a copy of his new book, “History of the Apollo and Skylab Astronaut Rescue Team.” Charles County native Killen, who spent a career working in the fire service that began locally, was one of 48 firefighters at Kennedy Space Center in Florida selected to serve on the highly specialized team.

Bill Killen explains an illustration in his new book, “History of the Apollo and Skylab Astronaut Rescue Team.” County native Killen, who spent his career working in the fire service, was one of 48 firefighters at Kennedy Space Center in Florida selected to serve on the highly specialized team.

It’s probably best that Bill Killen’s wife wasn’t aware until recently of the level of danger he used to face day in and day out.

Killen, a native of Charles County who now resides in Tennessee, said his interest in firefighting is lifelong during a recent interview on the subject of his newly-published book, “History of the Apollo and Skylab Astronaut Rescue Team.”

The book, Killen said, tells the tale of 48 firefighters and seven Department of Defense medics whose story, until now, hasn’t been widely told. And as he was one of them, the book contains a firsthand look into some of The National Aeronautics and Space Administration’s most famous missions from that perspective.

“I wrote [the book] because there was nothing written about the Astronaut Rescue Teams,” Killen said. “I’m one of four surviving members from the Kennedy Space Center fire department that served on the Astronaut Rescue team initially. ... It was a very dangerous job. In fact, my wife did not know until about six months ago the degree of danger of the missions we were on.”

As a child, watching his father go to work as a civil service firefighter at what is now Joint Base Anacostia-Bolling in Washington, D.C., Killen said, sparked his own interest in the field. When he was 16, he joined up with the Potomac Heights Volunteer Fire Department.

So began his career in fire service, one that will reach its 64th year this year on March 7, Killen said. He joined the Army after that, and then briefly worked at Safeway before he went on to work for a time on base at Naval Support Facility Indian Head as a firefighter for the U.S. Navy. He remained there for five years, Killen recalled, and on a trip to Florida learned from a fellow Henry E. Lackey High School graduate about the Kennedy Space Center firefighters. They were hiring, he learned, and he got an interview shortly before the space center formally opened in May 1965.

“The fire chief handed me an employment application and wrote July 19 and told me to fill it out, send it back and report for duty. I was hired on the spot,” Killen said.

Killen came on board at a critical time: The National Aeronautics and Space Administration was working feverishly on the Gemini program, its second attempt at human spaceflight that preceded the Apollo program, which would prove famously successful in 1969.

The idea for the rescue team was born of the Apollo 1 fire, which killed three astronauts in January 1967. Killen, as one of the original 12 members selected to man the team that was first established in 1968 ahead of the Apollo 8 launch, literally had a front-row seat to the launches, albeit from Earth.

“The Saturn 5 rocket is a 363-foot missile,” Killen explained, paging through his book. “I cover in the book … how the construction of the launch pads and the launch towers are complex, creating a number of rescue problems. It’s basically a 363-foot stick of dynamite, and its blast danger zone is out 7,000 feet.”

So, where did Killen and the others sit in this volatile mix?

“You’ll notice here where it says M-113 parking, that’s where the Astronaut Rescue Team sat, 1,500 feet away,” Killen said. “Well within the zone. If that had exploded on the pad, everything within that zone would have been gone.”

The book details the intensive training required to be on the rescue team and is rich with both photographs and written information. There’s more than 200 photos and sketches inside, he said, about a fifth of which are previously unpublished. Some of them, he said, even NASA has never seen before. They range from photos of Killen and his teammates on the job to shots of some of the crafts as they launch into space.

Killen ultimately served on four Apollo launches, even at one point escorting the crew of Apollo 15 to launch. He continued with the rescue team for the next NASA program, Skylab. Skylab III returned to Earth on Feb. 8, 1974, and Killen, along with the others, was reassigned elsewhere Feb. 11, ending his time on the rescue teams. He retired in 2004, and also served for a time as president of the International Association of Fire Chiefs, and currently serves as president of the Emmitsburg-based National Fire Heritage Center.

For Killen, writing this book — his seventh — was a natural process.

“I guess I’m a packrat,” Killen said, speaking of a trove of documents at his home that spans back to his high school days that he’s used often in his writing. “I have a lot of material collected in the book. I have an American flag from off Neil Armstrong’s training suit, the name tag from off Jim McDivit’s suit.” He even has autographs from actor Jimmy Stewart and famed television anchor Walter Cronkite on canceled mission envelopes, also included in the book.

During this chapter in his life, Killen said, he and the other members of the rescue team were arguably in just as much danger as the astronauts themselves.

“Firefighting is dangerous, probably one of the most dangerous jobs,” Killen said. “Most of the exposure and danger to firefighters is when you respond to an event. The closest people to the astronauts were the rescue team. Everyone else was miles away. It was toast time if it blew up. … We were aware, but we were all a bunch of young people, and young people don’t think about the death or the danger.”

Despite the highly specialized and perilous nature of their work, not much was written about the rescue team beyond a piece in Popular Mechanics in 1970 and some local news coverage in Florida in the same span of time. Killen said his work is the most in-depth look at the team’s work to be published.

“Unfortunately, the team never got the recognition they should have gotten,” Killen said. “We got to the point where … the prime six, the ones exposed to the greatest danger, every member of that team could do every job. If one fell out and only five went in, the other five could do it.”

Currently, the book isn’t widely available in stores and it’s easiest to order a copy of the $35 book by emailing Killen himself at kirkbo65@charter.net, he said, but he hopes to see that change soon. Its proceeds all benefit the NFHC, he said.

Sam Goldwater, the executive director of the NFHC, said that Killen’s latest is important because it tells a story that’s widely unknown to most people, including those in the firefighting community. For the latter, especially, Goldwater said the book tells a vital and compelling story.

“It really did leave me wanting more information,” Goldwater said in a recent phone interview. “It’s a good example of how when the general public faces the fire service, we think of the Norman Rockwell version of a firefighter … but there’s a lot of subsets most people aren’t even aware of. One of those is what this book is about. Even at NASA, where they have regular firefighters, they have a group that’s so specialized it became a full-time job.”

Goldwater said that as one with 50 years of experience, he was struck by the complexity of the level of training and feels anyone with a background in the same would feel similarly. It’s “a very unique book about a very unique group of people,” Goldwater said, and noted that fewer than 100 people have held the role. That, he said, makes Killen’s perspective especially notable.

Goldwater said he’s traveled with Killen to Kennedy Space Center and has since seen firsthand exactly how close he and the others were to the danger.

“It’s incredibly dangerous,” Goldwater said. “Imagine a fire escape and the ladder you go up with the platform in the middle, the grate you see down through. Up three or four stories, that gets unnerving. … Everything they did was dangerous, including the chemical used for fueling.”

Goldwater also noted that there was “no simulator for the firefighters like there was for the astronauts.”

“Firefighting is incredibly dangerous as-is, but these are the danger guys of the fire department,” Goldwater said. “It’s really shocking when you start thinking about the amount of danger these guys were in. The book really does a good job of showing that, but doesn’t show danger just for danger’s sake. It does show training evolutions and the amount of information these people had to assimilate. You couldn’t be just a Joe Blow firefighter like me. You had to be one smart cookie.”