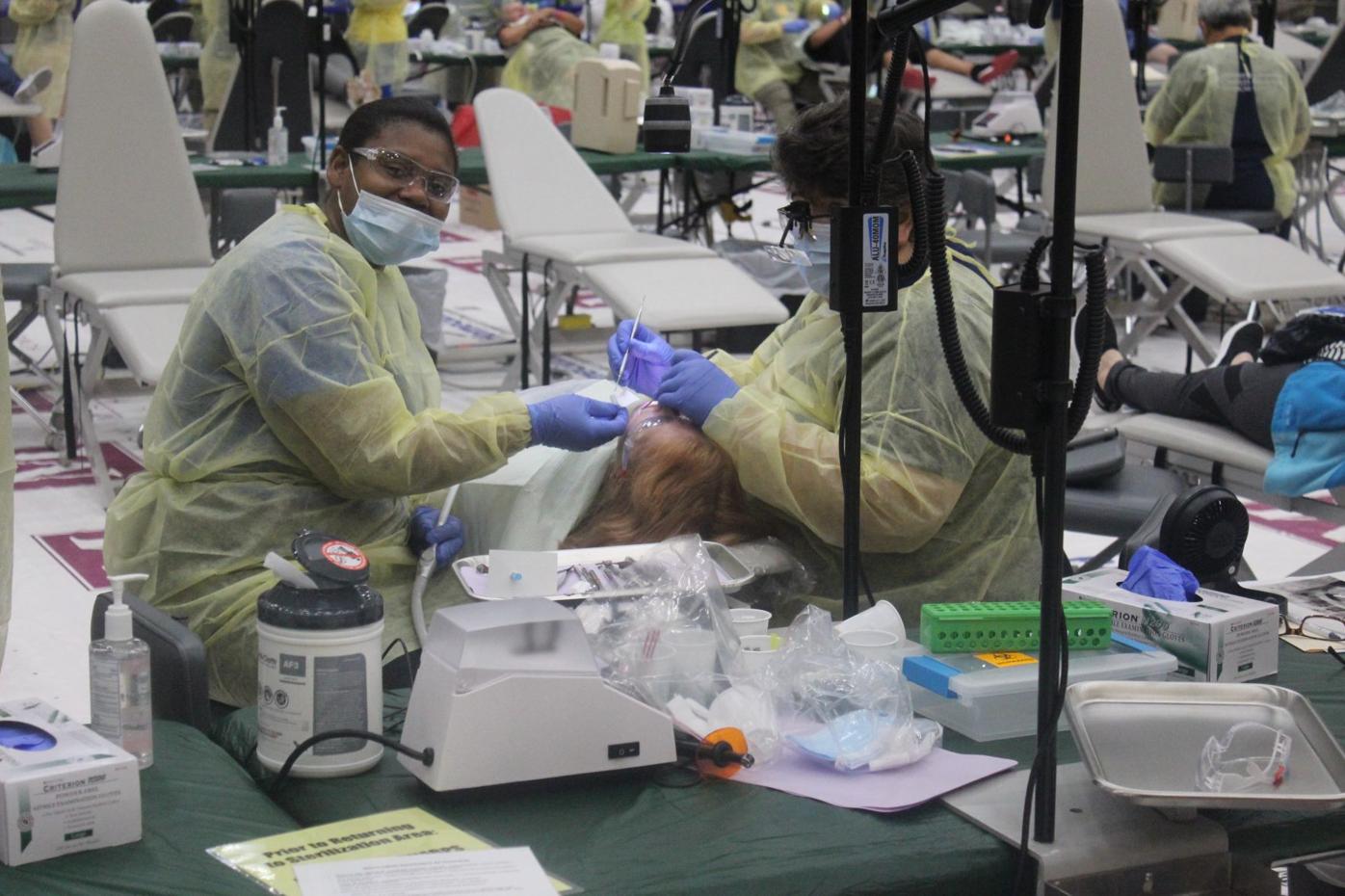 Dentists and hygienists from the tri-county area came to North Point High School on Friday and Saturday to offer free dental care to residents. Some even paused their work to address the camera. 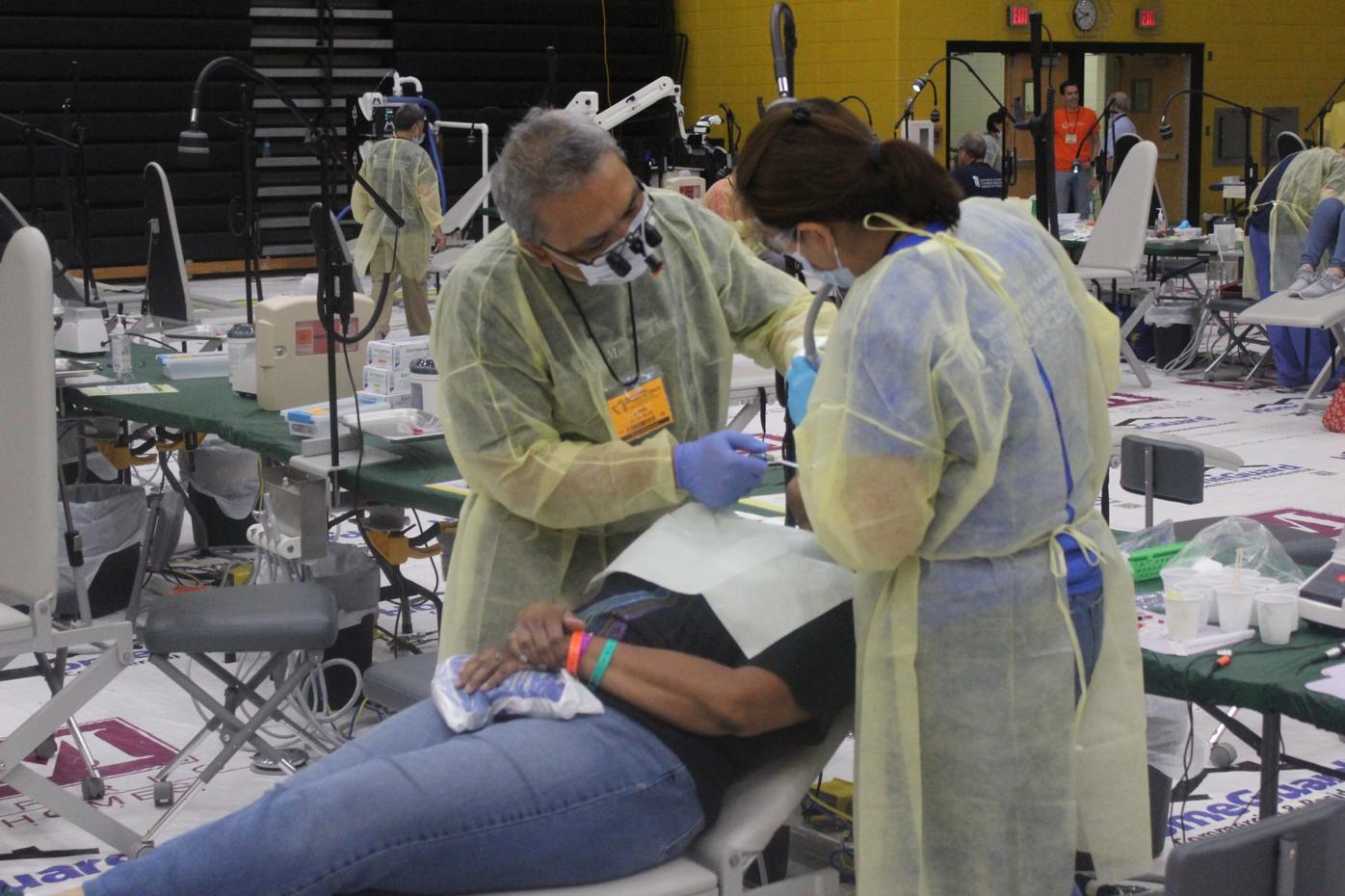 A dentist and dental assistant in the extraction and restoration aisle work on a patient. 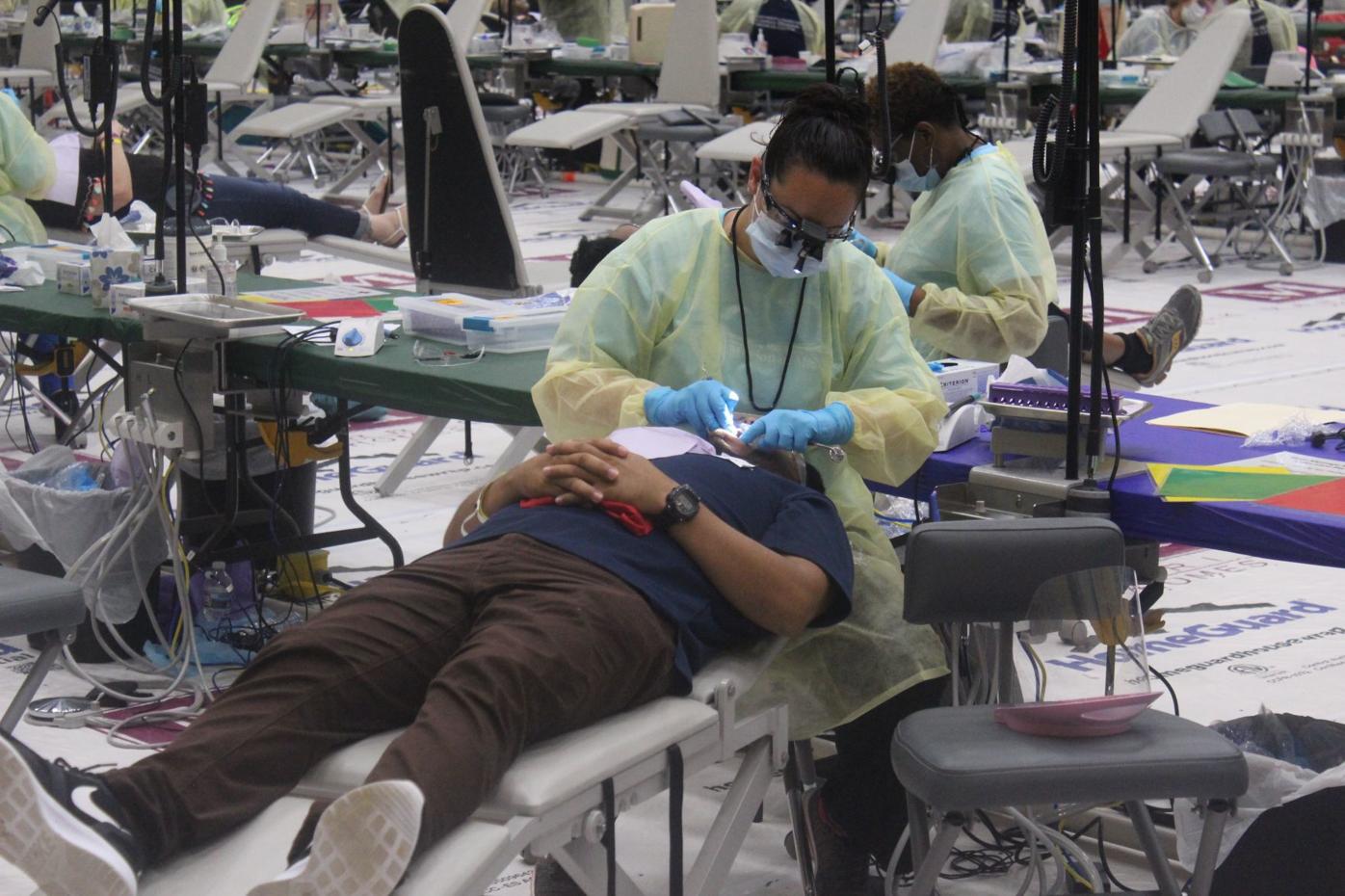 A dentist in the hygiene section examines a resident’s teeth before the cleaning. 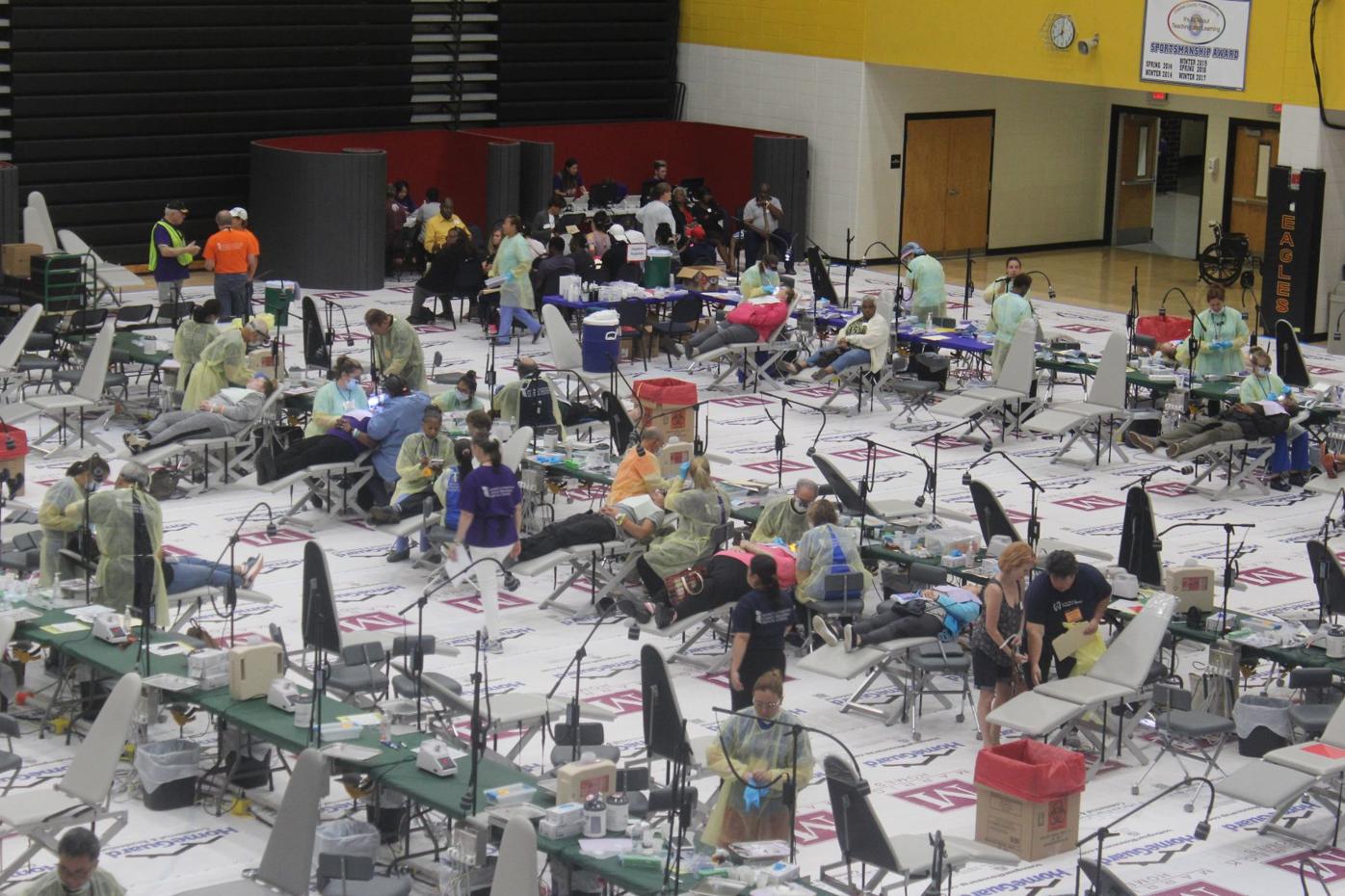 Friday and Saturday at the Mission of Mercy event featured more than 600 visitors each day, serviced by a team of 1,000 volunteers.

Dentists and hygienists from the tri-county area came to North Point High School on Friday and Saturday to offer free dental care to residents. Some even paused their work to address the camera.

A dentist and dental assistant in the extraction and restoration aisle work on a patient.

A dentist in the hygiene section examines a resident’s teeth before the cleaning.

Friday and Saturday at the Mission of Mercy event featured more than 600 visitors each day, serviced by a team of 1,000 volunteers.

Dentists, hygienists and assistants from across the state of Maryland gathered at North Point High School on Friday and Saturday for the Southern Maryland Mission of Mercy, an opportunity for local residents with little or no insurance to receive quality dental care.

Citizens began lining up on Thursday for prescreening, with the first-come, first-served event drawing around 600 people each day. More than 20 businesses and nonprofits partnered with the Mission of Mercy team, funding the operation and generating 1,000 volunteers. Dental professionals came predominantly from Calvert, Charles and St. Mary’s counties, along with one practice traveling all the way from the Eastern Shore.

“Our dentists give their time to keep all of Maryland smiling,” said Maryland State Dental Association Foundation President Dr. Diane Romaine in an MSDA press release. “These are fully trained dentists providing the best care to some of our most vulnerable citizens. Missions of Mercy are a testament to the commitment Maryland dentists have to the people of this state.”

There are four of these free clinics across the state, divided by region and occurring once every two years. Residents ages 19 and older are permitted after being medically cleared, and there is always a pharmacy present to provide any necessary pain medications or antibiotics. The event offers hygiene, restoration and extraction services, all funded by private donations through the related state organizations. The two days of service in Southern Maryland this year cost $850,000, not a cent coming from those given care.

“This opportunity is great because a lot of us don’t have health insurance,” said a Brandywine resident who asked not to be named. “You go to a dental clinic, it’s backed up, it’s too many people in this area. It’s great, I’m very appreciative of the opportunity.”

The line on opening day stretched from the North Point gymnasium to the swimming pool, then turned the corner to circle the front parking lot. Patients would first check in and go through a preliminary clearance process, then sit down and register for services. Volunteers clad in varying shirt colors to denote their assignment scurried around the school, in addition to the hundreds of dentists and hygienists, assisting patients at each step of the process.

“It is not me or any one person, it is the hundreds of volunteers,” said Garner Morgan, retired Mechanicsville dentist and co-chairman of Southern Maryland Missions of Mercy. “The jobs other people do are just as valuable as what the dentist does. From the escorts to the parking lot attendant to the sterilization people. It’s a whole team here.”

Morgan explained the program began in Virginia a couple of decades ago, and after working at a Mission of Mercy around 10 years back, he decided to start one in Southern Maryland. Romaine’s Cumberland outfit was the first iteration in the state, and Morgan followed suit after deciding to cut back at his practice. He said it takes a year to put together the Mission of Mercy, which is why they happen every other year. About 160 dentists participated on Friday and Saturday, working in shifts to share the workload. Morgan described the need as unbelievable, and added there would be just one option for patients if they weren’t given this opportunity for free dental care.

The clientele was diverse on Friday, with citizens from many walks of life taking part in the event. There was a Spanish interpreter on hand in the registration area, and a French one was called upon as well. Salisbury dentist Greg Allen said the typical patients are those that fall in the middle ground between being fully insured and struggling at the lowest economic level, “the people that kinda fall through the cracks.” He added there have been improvements in dental health and healthcare coverage opportunities as a result of the various Missions of Mercy, but more significant changes may be on the horizon at the state level.

Allen had just returned from an American Dental Association meeting in Chicago where several state dental representatives expressed the positive impact of Medicaid programs in their areas, and the dentist hopes that will help progress in Maryland. President of the Maryland State Dental Association, Dr. Vanessa Benavent shared a similar sentiment in an MSDA press release, stating Missions of Mercy “demonstrate the real need in Maryland” for adult dental Medicaid for citizens.

The legislative agenda of those involved with the program create an interesting paradox with the goal of Missions of Mercy, as Allen noted a truly successful initiative would mean no one showing up to these events anymore. The program pushes the agenda forward in addition to providing a necessary service but would become extinct if this underlying objective was completed.

There’s another aspect though, as Missions of Mercy foster human interaction and allow local groups to come together toward a major cause. Aside from the politics and the toothaches, there’s the people.

“It brings together communities,” Allen said. “It brings all the dentists together. There’s a lot of camaraderie that’s developed between these events, between different parts of the state. We at the Maryland State Dental Association look forward to this.”