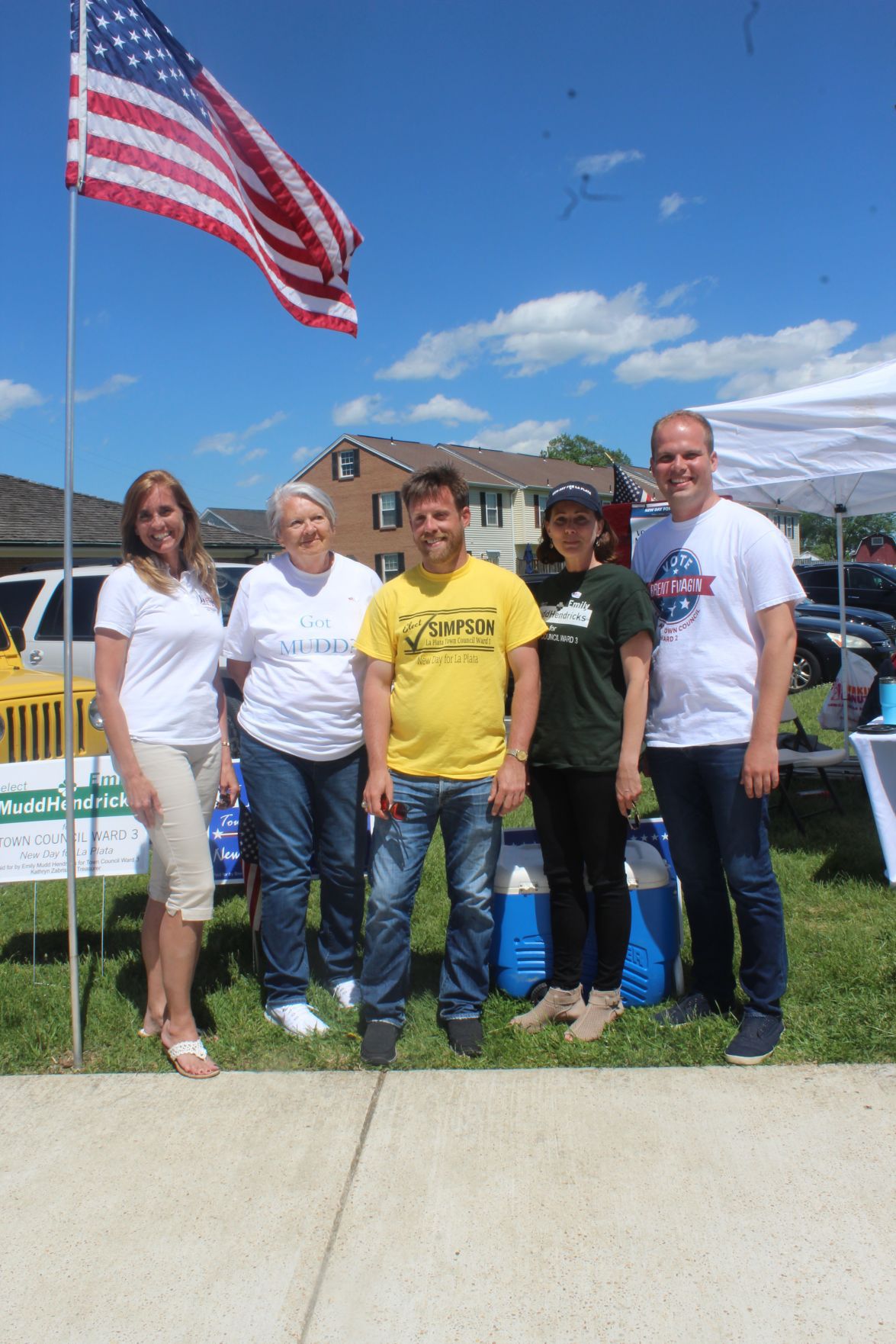 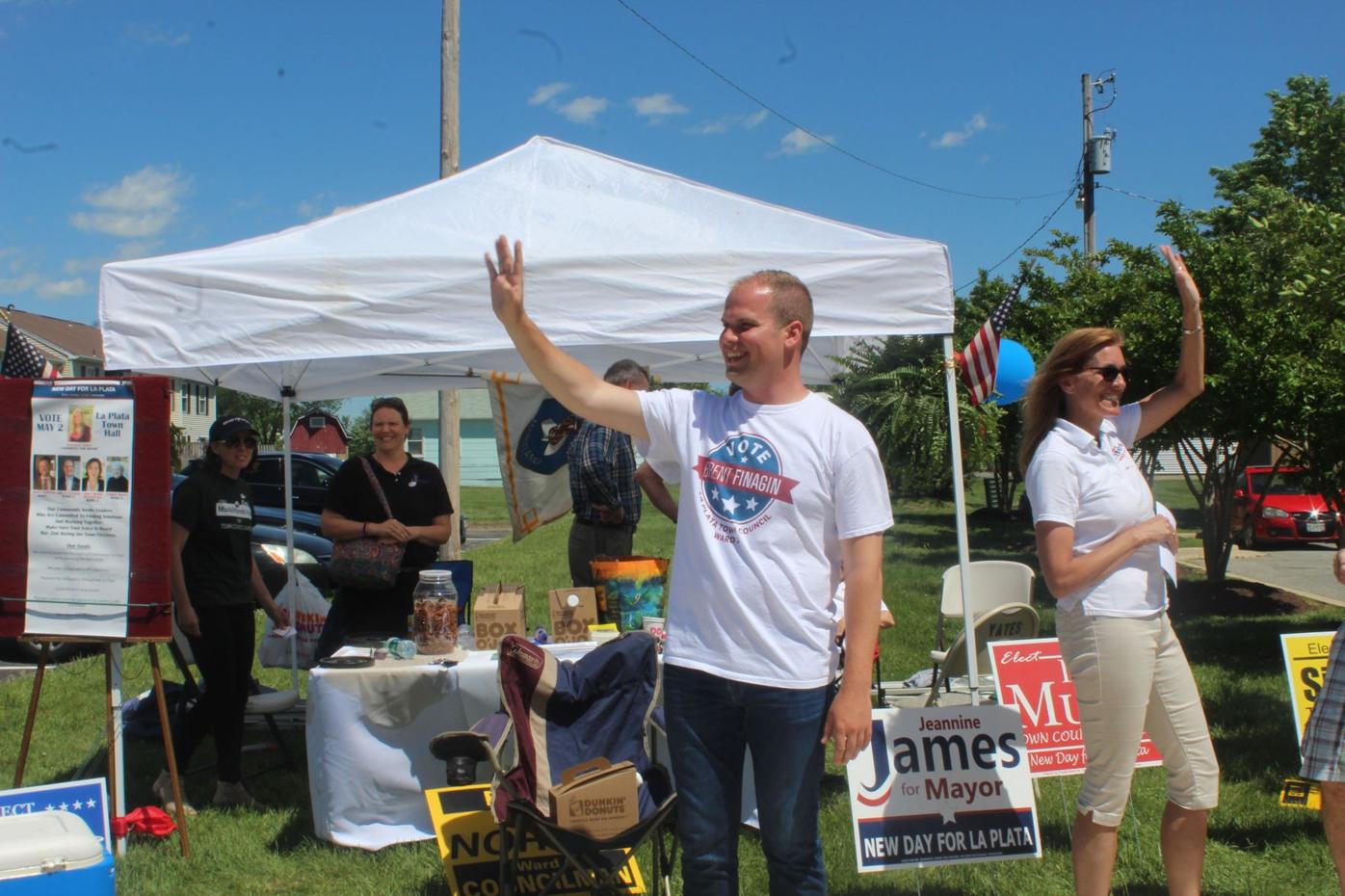 Ward 4 candidate Brent Finagin and Mayoral Candidate Jeannine James wave to residents by town hall during the Town of La Plata General Election on May 2. 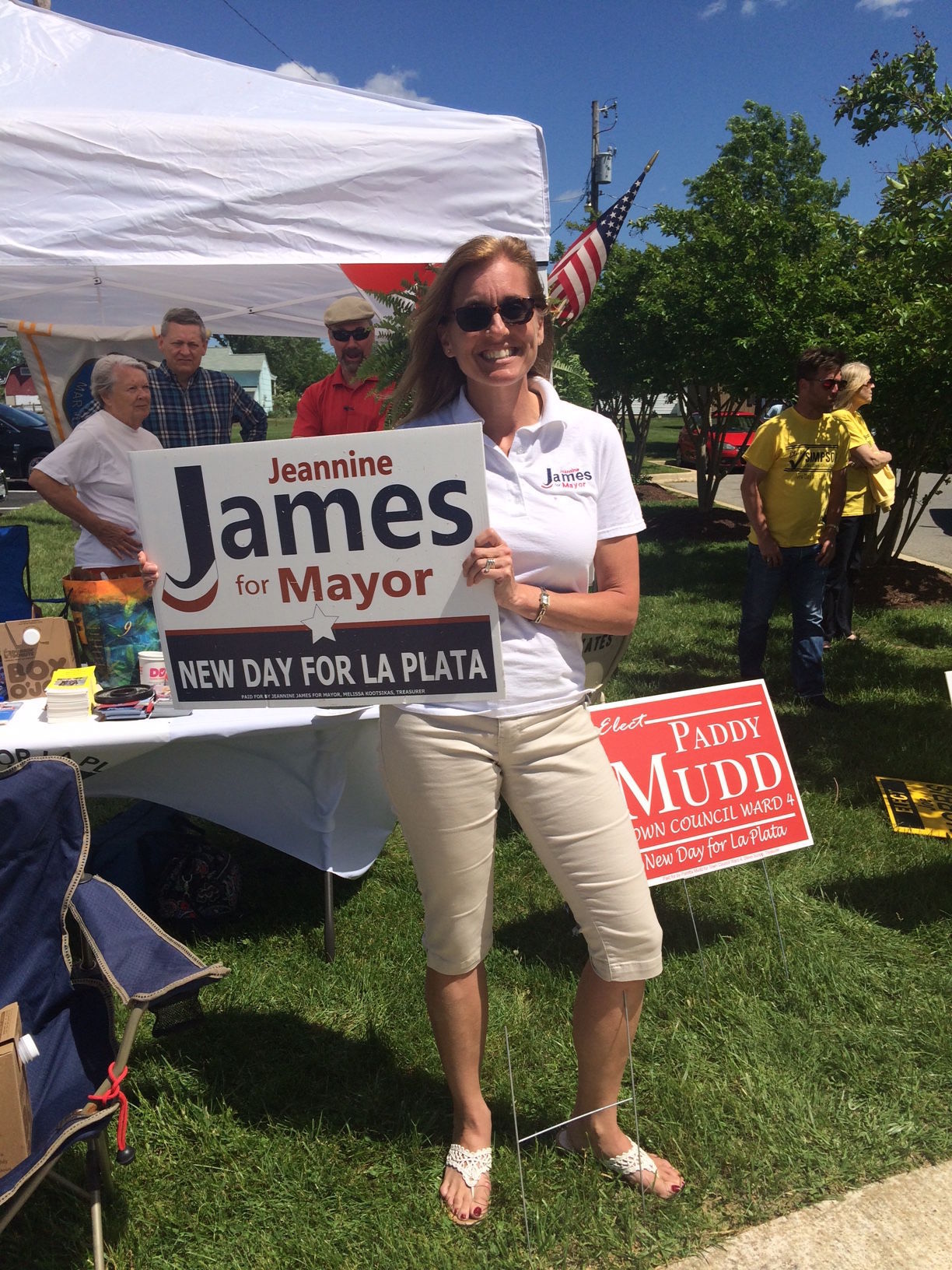 Ward 4 candidate Brent Finagin and Mayoral Candidate Jeannine James wave to residents by town hall during the Town of La Plata General Election on May 2.

Residents in La Plata woke up to “A New Day for La Plata” after the General Election on May 2, with the entire slate of candidates touted by the La Plata Business Association winning seats on the town council.

The New Day for La Plata slate was sponsored by the La Plata Business Association and the five candidates were announced in early 2017. Now for the first time, three women will become council members in the Town of La Plata: Emily Mudd Hendricks, Paddy Mudd and James. They will serve alongside two lawyers, Brent Finagin and Matt Simpson, to guide the town for the next four years.

“It was a long journey to get here and I was very pleased with the positive campaign that I ran,” James said. “It was kind of surreal for sure. It was long, hard work to get but it paid off. Now let’s see what we can get done for the town.”

“My current council has been the utmost professionals and have done their job admirably. I’m going to miss their leadership and council,” Gilroy said.

James said she looks forward to finishing the town’s FY2018 budget, as well as addressing issues and concerns of the residents and the businesses.

“It’s going to be overwhelming for a couple of months but I hope that the current council is gracious enough to help us with our transition. I’m willing to work with them because they have the knowledge and they have been serving on the council for many years. I hope that we can build on what they have already laid the foundation for,” James said.

After many months of hard work to bring more voters out, this year’s General Election in the Town of La Plata showed a huge increase in turnout with 1,009 voters.

“I was pleased by the turnout in this election ... while still not being high enough, it certainly is refreshing to see such a dramatic increase over four years ago,” said Ward 1 candidate Matthew T. Simpson.

Simpson won the Ward 1 seat from the incumbent Wayne Winkler with 621 votes. Winkler had 369 votes.

“I felt that Councilman Winkler and I ran a clean and spirited race, the kind that La Plata should expect from its leaders,” Simpson said. “I look forward to calling on him for his knowledge, and more specifically, to help utilize the town’s prize train station in every way possible. I look forward to working on the issues including the encroachment of sprawl, an infrastructure in need of upgrading and a downtown core waiting to realize its full potential.”

“I am humbled and truly honored to have been elected to serve the residents and businesses of the Town of La Plata as councilman,” Finagin said. “Most importantly, I want to thank the voters for their enthusiastic participation in our campaign and their remarkable turnout on Election Day. I also want to thank my opponents for a hard-fought challenge.”

Ward 4 incumbent Joseph W. Norris had 448 votes — the most votes for the incumbents — but still lost to Paddy Mudd (Paretta D. Mudd) who had 548 votes.

Norris said at first he was disappointed when he heard the election results but it didn’t last long.

“I’ve had the privilege of serving for eight years and I wish them well. They clearly ran a better campaign than we did so they deserve it. I’m ready to get on with the next stage of my life. I’m grateful I had the opportunity to do what I did,” Norris said.

Paddy Mudd said she is thankful to the Town of La Plata for their support and confidence.

“Let’s work together with a spirit of cooperation and optimism for the future while remembering and honoring our past,” Mudd said.

Mudd Hendricks, with 622 votes, had the most votes out of all the candidates in the general election. She said she is humbled by the outpouring of support and will work hard to see La Plata thrive.

“I’m not surprised by the results of the election because many of the residents I spoke with were ready for new leadership and liked the diverse skill set of the New Day for La Plata candidates,” Mudd Hendricks said. “Also, I’m very happy to be serving with two intelligent and accomplished women.”