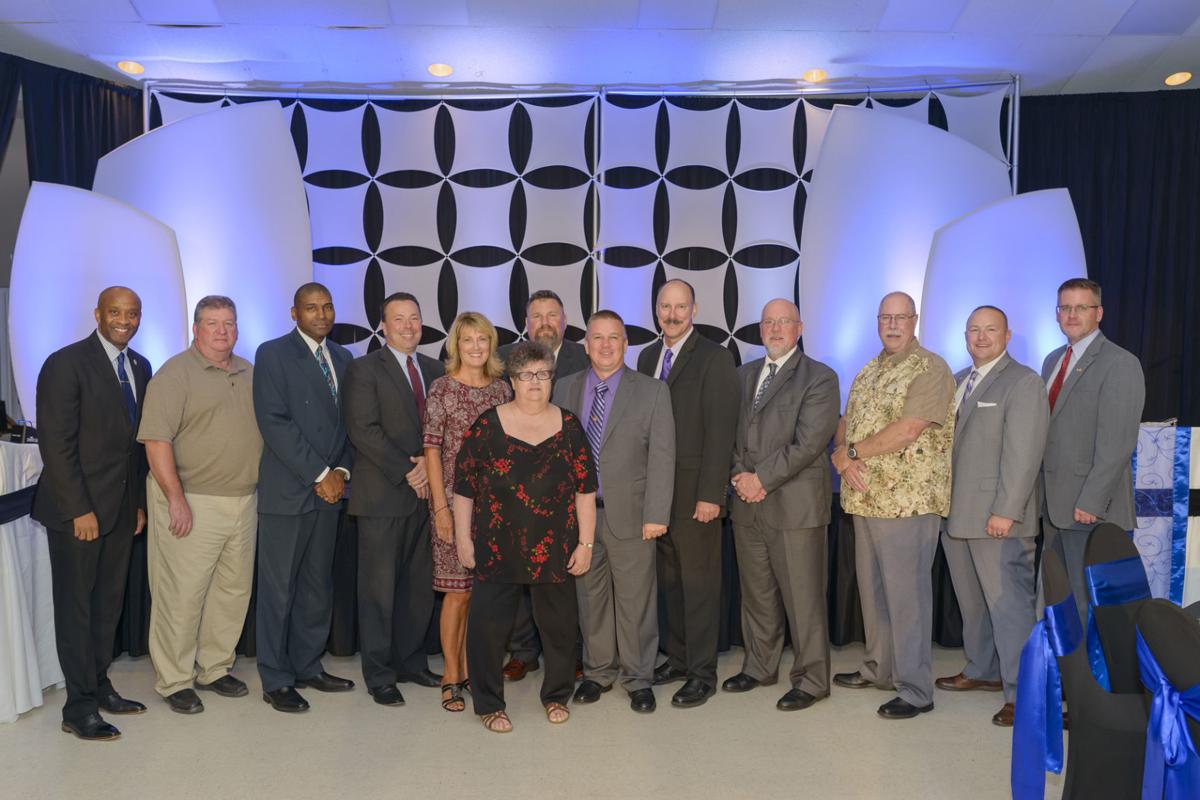 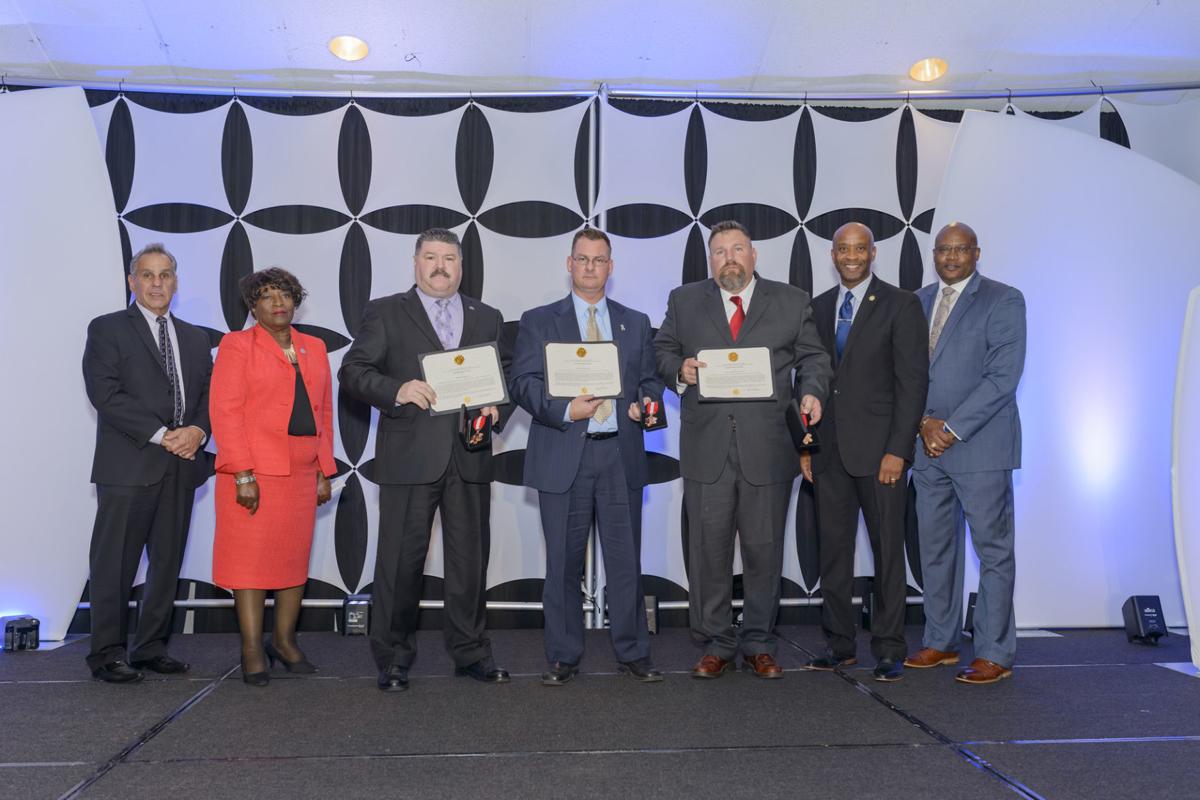 Honorees were recognized for completion of service to the agency, excellent field work or acts of bravery. Retired Capt. William Saunders served as the master of ceremonies. The Charles County Sheriff’s Office Honor Guard presented the colors; Jennifer Voorhaar sang the national anthem; Chaplain Aaron Jones delivered the invocation; and Chaplain Larry Palmer delivered the benediction. “Combined, our retirees provided 593 years of service to Charles County! That’s a lot of years, and each and every retiree will surely be missed,” Berry said in the release. “To those receiving awards, thank you for going above and beyond the call of duty, for saving lives, and for your superior service.”

The following retirees were honored (listed with dates of service):

On Feb. 21, Sgt. Mujahid Ramzziddin of the Prince George’s County Police Department was shot and killed in Brandywine while taking police action off-duty during a domestic dispute in his neighborhood. After the shooting, the suspect fled in a black SUV toward Charles County, prompting the dispatch of a lookout for the vehicle to Charles County Sheriff’s Office patrol officers. Wagner and Beall, who were on a traffic assignment, heard the lookout call and responded to the area of Berry Road and Bensville Road to monitor traffic in case the suspect took that route. Soon after, both officers observed the suspect vehicle traveling west on Berry Road, at which time they began following with Freeman joining them. A chase ensued, with the suspect vehicle running red lights and reaching speeds of over 90 mph. Officers followed the suspect back into Prince George’s County. Due to a road block set up by PGPD officers on Indian Head Highway at Old Fort Road, the suspect bailed out of his vehicle and attempted to flee on foot. While the suspect engaged in a gun battle with PGPD officers, Freeman, Wagner and Beall kept their attention on the suspect vehicle, clearing it with no other occupants located. The lone suspect died as a result of the wounds he received in the shootout.

The actions of these officers directly contributed to the capture of the killer of a police officer from a neighboring jurisdiction, according to the release. For their bravery and situational awareness, putting their own lives in danger to capture a killer, the Bronze Medal of Valor was presented to Freeman, Wagner and Beall.

• Guy Yesse, for his courage to intervene to protect a victim and stop a violent attack and robbery in progress.

• Pfc. Dale Harrison, for quickly assessing a dynamic situation and successfully disarming a subject who was threatening passengers on a bus.

• Pfc. Andrew Bringley, for his quick response and decision-making, which stopped a violent attack and saved the life of a victim of domestic violence.

• Sgt. Harry Ivers, Pfc. John Campbell and Thomas Raleigh, for their great teamwork and heroic actions in rescuing a stranded boater whose kayak had capsized.

• Cpl. Jamie Vines and Cpl. Jessica Minor, for their outstanding response during an attempted suicide.

• Cpl. Charles Caldwell, for his quick thinking and fast and effective deployment of a tourniquet on a motorcycle crash victim.

• Dean Fischer, Sheldon Moten and Clifton Thomas, for pulling a woman to safety when she fell through the ice on a creek.

• Pfc. Christopher Gustafson and Officer Thomas Rickard, for their quick thinking and action in treating the victim of an attempted suicide.

• Pfc. Andrew Fenlon, for his selflessness and putting his own health at risk to donate a kidney to help his friend and fellow officer.

• Deputy Director Robert Studds, Capt. Gerald Duffield, Lt. Brian Gardiner and Lt. Matthew Irby, for their commitment, creativity and teamwork in coming up with a new badge for the Corrections Division.

• Capt. David Kelly, for his dedication to duty and for establishing a drone program that has produced great results.

• Lt. Matthew Irby, for his innovative thinking and leadership in developing a mentoring program for new correctional officers.

• Cpl. Kristen Gross, for her commitment to seeking justice for a family and her selflessness in helping them through trying financial times.

• Diane Richardson, Janelle Love, and Michelle Hurst, for their work in strengthening the relationship between the agency and the community in a variety of ways.

• Pfc. Dennis Sauve, for his innovative approach and commitment to taking guns out of the hands of violent criminals.

• Cpl. Michael Smith, for his good work in organizing the Detention Center’s Re-Entry Fair and commitment to the agency and the community.

• Julie Barrows, for her commitment to the agency and its employees, and for her exceptional efforts in planning the Retirement and Awards Banquet.

• Lt. Jason Carlson and Lt. Scott Grove, for their dedication to helping victims of domestic violence and for ensuring factual information was being released to the pubic following a horrific spate of domestic-related murders.

• Sgt. Dustin Hendricks and corrections officer Trey Brown, for their action in ensuring the safety of a mentally ill inmate.

• Michael Kent Heiser, for intervening in an incident to protect a sworn officer from assault and possible injury.

• Cpl. Paul Anderson and Pfc. Bryan Keys, for their attention to duty and going above normal police responsibilities to ensure the safety and welfare of a citizen.

• Cfc. Jason Johnson, for his initiative and actions in ensuring the safety of employees and inmates when he learned of a possible weapon inside a cell.

• Pcs. Mindy Millar, for her dedication to duty and for her diligence in identifying an out-of-state sex offender residing in Charles County.

• Cfc. Gary Owen Jr. for his attention to detail and his effort to protect life when he noticed something that indicated an inmate may attempt suicide.