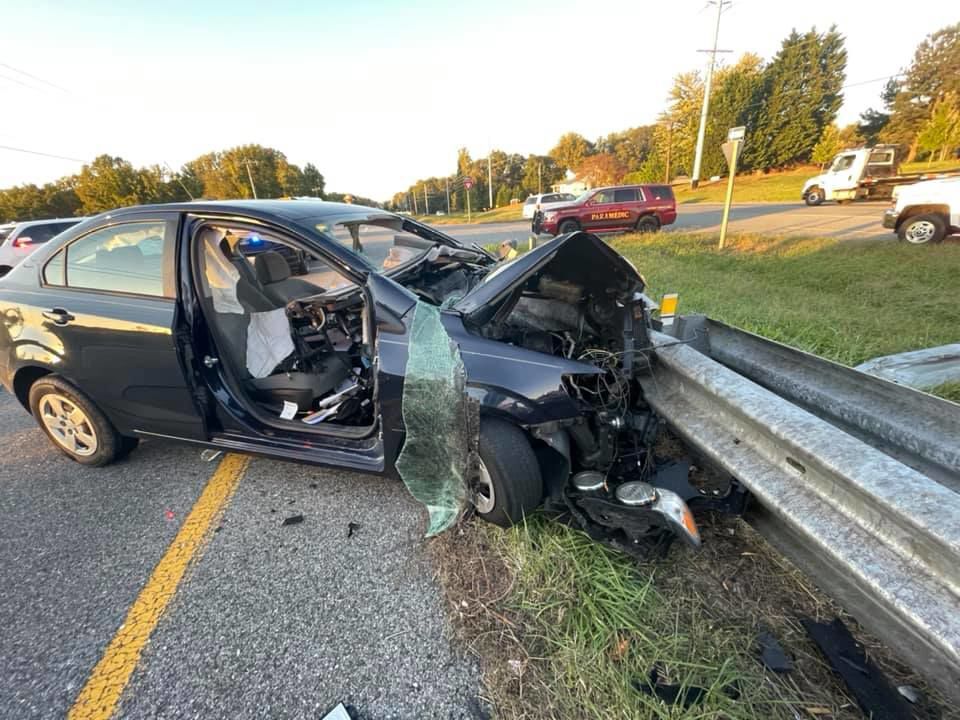 During the late afternoon hours of Oct. 21, crews from Huntingtown were dispatched to Route 2/4 and Sun Park Lane for a motor vehicle crash. One motorist was reported trapped. According to a report posted by the Huntingtown Volunteer Fire Department, Squad 6 removed the driver side of the vehicle and lifted the dash to extricate the driver from the car. The injured motorist was flown by Maryland State Police Trooper 2 to a regional trauma center. 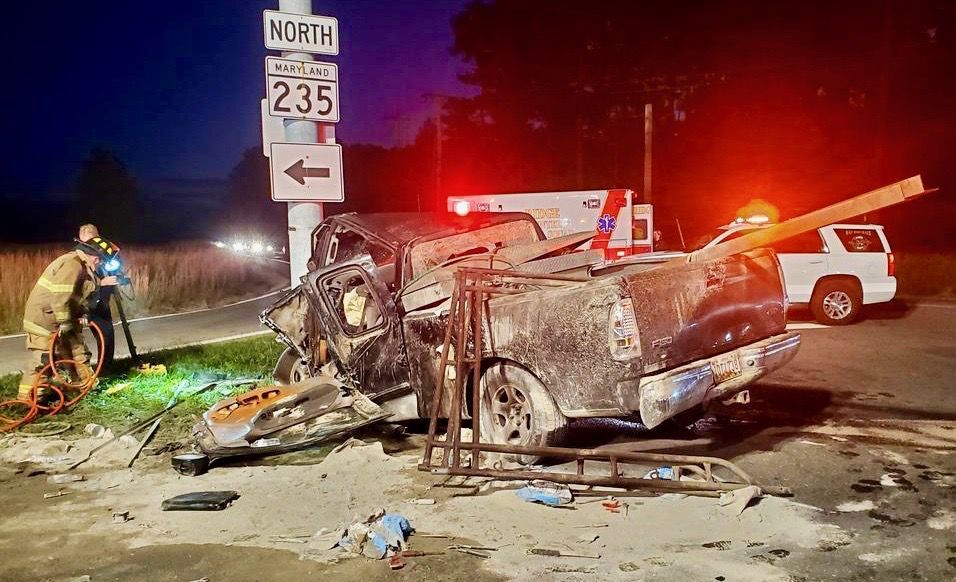 During the late afternoon hours of Oct. 21, crews from Huntingtown were dispatched to Route 2/4 and Sun Park Lane for a motor vehicle crash. One motorist was reported trapped. According to a report posted by the Huntingtown Volunteer Fire Department, Squad 6 removed the driver side of the vehicle and lifted the dash to extricate the driver from the car. The injured motorist was flown by Maryland State Police Trooper 2 to a regional trauma center.

Heather Christine Hayes, 34, was indicted on Friday on felony theft charges for allegedly taking money from a Waldorf home she cleaned.

According to charging documents, Charles County Sheriff’s Office deputies were alerted to the theft in the 12000 block of Meadowbrook Lane on Aug. 9.

The victim reported that $10,800 in cash was allegedly stolen from bundles kept in bank envelopes and paperclips in a desk drawer in the residence. Allegedly, the victim stated that only his wife and an employee of the maid service that cleaned his home, later identified as Hayes, had entered his residence over the last three months.

Hayes allegedly denied the accusation during an interview with deputies on Aug. 31 before stating that she had taken cash from the drawer on two different occasions, including a theft of $1,600 days before the victim discovered the theft.

James Nigel Ekleman, 40, of Suitland was arrested on Friday and charged with felony firearms possession with felony conviction, four handgun related misdemeanors, and citations for driving under the influence and while impaired by alcohol.

The arrest happened in the early morning hours last Friday after a traffic stop conducted by Maryland State Police on Route 301 near Sub Station Road in Waldorf. Officers stopped Ekleman, driving a maroon Hyundai Elantra, after he allegedly failed to stay in a single lane.

When officers approached, they allegedly detected a strong odor of alcohol and conducted a field sobriety test, which he failed and was placed under arrest.

A search of the vehicle allegedly found a polymer P80 handgun loaded with seven rounds, which Ekleman was allegedly prohibited from owning.

Charging documents stated that Ekleman refused breathalyzer tests on the scene or while in custody.

Ranota Maria Penkert, 41, of La Plata was charged on Oct. 19 in connection with the alleged theft of two bicycles from the 100 block of Spanish Moss Drive in La Plata. According to charging documents, deputies were alerted by a resident that a blue Mach One GT bicycle, valued at $1,800, and a green Next Gauntlet bicycle, valued at $50, had been stolen from the residence.

The victim allegedly made contact with an employee at a local pawn shop that had taken possession of both bikes. When deputies arrived to the store and searched records, they discovered that Penkert had allegedly pawned off the bikes, as identified by a copy of her driver’s license.

Sex abuse convict gets two more charges while in jail

A man who was convicted of sexual abuse of a minor earlier this year now faces two misdemeanor assault charges, including one of a corrections officer.

Gilbert Estevez, 32, of Leonardtown was charged after he allegedly struck an inmate in the face after an argument in the St. Mary’s jail on Oct. 12. The victim had an abrasion on his right cheek, a court document states.

Estevez was convicted at trial in June for sexual abuse of a minor after a jury was hung on four rape charges and another sex abuse charge. He awaits sentencing. No date has been set yet.

Frederick Parris Crawford, 29, of Clinton faces a felony charge of obtaining drugs by forgery, along with three related misdemeanors after the Walgreens in Leonardtown reported a fraudulent attempt to obtain promethazine with codeine on Oct. 21.

When police responded, a strong smell of marijuana was emanating from a red Honda Pilot outside the business. Various prescription pills were allegedly found inside the vehicle, including a bottle of promethazine with codeine, oxycodone with acetaminophen and ashydrocodone. Crawford was released on his own recognizance on Oct. 22.

Unique Ontee Spicer, 35, of Lexington Park faces felony and misdemeanor assault charges after she allegedly prevented a woman from exiting her vehicle at a gas station on Oct. 15.

The female victim tried to open her car door three times and Spicer allegedly pushed it shut and struck her left arm, a charging document states. The woman was finally able to get out of her vehicle and approached Spicer, who was in her vehicle.

The woman said Spicer accused her of watching her home from the gas station on a regular basis. She allegedly told Spicer that she wasn’t going to harass her anymore, and Spicer allegedly swung a small wooden bat at the woman, striking her in her left pinky finger. Spicer was issued a summons on Oct. 19.

Phillip Randolph Adams, 42, of Mechanicsville faces three misdemeanor assault charges and three other misdemeanors after he allegedly punched a 20-year-old man in the nose on Oct. 24 and caused it to bleed. Adams said the argument stemmed from $45 in missing cash that he said he put under a mattress.

Police responded to a report of a disturbance in the 24500 block of Hollywood Road at 1:50 p.m. A 43-year-old woman said Adams was intoxicated, struck her and the 20-year-old man and tore up the house. Her cell phone, which was valued at $108, was found across the street with a cracked screen, the charging document states.

Adams was arrested a short time later walking in the neighborhood. He was allegedly told to place his hands behind his back three times and asked “why?” three times.

Adams allegedly punched a Maryland State Police trooper once before the trooper grabbed Adams’ wrist and used a takedown technique. The trooper was not injured, but a button was missing from his shirt, according to charging papers.

Adams had two scratches on his face, allegedly from the altercation at his residence. The woman had no injuries. All denied medical care. Adams posted a $2,500 bond on Oct. 24.

Terrelyn “Terrence” Leontha Wallace, 51, of Chesapeake, Va., was arrested on Oct. 23 on a warrant out of Prince William County, Va. Wallace was wanted on charges of strangulation, assault, destruction of property and preventing someone from calling 911.

A five-count indictment has been served on a 26-year-old Prince Frederick man for alleged sex crimes involving a 12-year-old male. According to court documents, defendant Joshua Ryan Gantt allegedly committed the violations on May 22 and Aug. 23.

Three of the counts — sex abuse of a minor, second-degree rape and third-degree sex offense — are felonies.

According to charging papers, the allegations were reported to the Calvert County Sheriff’s Office on Aug. 30. A warrant for Gantt’s arrest was issued Sept. 10 and served on Sept. 14.

On Oct. 15, probable cause was found in the state’s case against Gantt as a result of a district court hearing. The case was forwarded to circuit court on Oct. 19.

Court records indicate Gantt is being held without bond. He is being represented by the public defender’s office. The case is being prosecuted by assistant state’s attorney Rebecca Cordero.

The Calvert County Sheriff’s Office reported that charges were filed on Oct. 15 against a 24-year-old Chesapeake Beach man for allegedly breaking into a North Beach restaurant the previous day. The suspect is identified as Kolten Takoda Ford.

A police report stated Deputy Ryan Gough responded to Hook and Vine Kitchen and Bar on 7th Street shortly before 1 a.m. Video surveillance from the restaurant revealed someone forcibly opening a door and entering the business.

A lookout for a suspect was broadcast to patrol units and a short time later a disorderly person, identified as Ford, was taken into custody. According to charging papers, Ford was wearing clothes that matched those of the person seen in the surveillance video.

According to court records, Ford posted $7,500 bond that day and was released. A preliminary hearing on the charges is scheduled for Nov. 15 in district court.

A three-count indictment was served Oct. 19 on a 40-year Huntingtown man in connection with an assault that occurred Sept. 6.

The victim was an adult female who investigators stated in charging documents had marks on her neck consistent with an attempted strangulation.

Calvert sheriff’s Deputy James Sturdivant stated in court documents that the defendant, Nebuchuel Bruce Walker, was bleeding with injuries to his hand and face. According to court records, during the fracas Walker alleged punched the woman’s phone and broke it.

The woman told Sturdivant that Walker tried to strangle her and “said he was going to kill her.” Walker told the deputy the woman self-inflicted the marks on her neck. After being charged, Walker posted $10,000 bond and was released. He was ordered by district court to stay away from the victim.

Walker’s indictment charges him with first- and second-degree assault and reckless endangerment. The case is being prosecuted by Michael A. Gerst, assistant state’s attorney.

On Oct. 14, Calvert sheriff’s Deputy Howard Anderson responded to Golden West Way in Lusby after a resident reported a theft. According to the report, several items were stolen off a sailboat parked in the rear of the residence.

Anyone who has information on this or any other crime may call Crime Solvers. Crime Solvers provides a means for citizens to anonymously provide law enforcement agencies with information concerning crimes and/or suspects. Callers do not need to leave a name, only the information.

If the information leads to an arrest or indictment, the caller may be eligible for a cash reward of up to $1,000. Information may also be submitted online through an anonymous form. If the information involves an emergency or in-progress incident, call 911. The Crime Solvers telephone number is 410-535-2880.