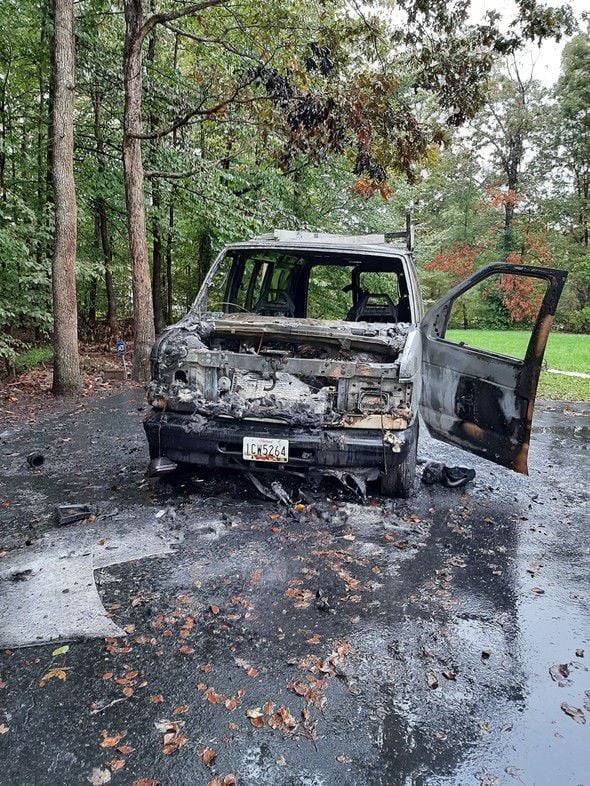 Deputy state fire marshals are investigating a White Plains vehicle fire which occurred at 6:30 a.m. on Monday, according to a notice which says the owner, Luis Bernal, discovered the fire which investigators determined was started in the cargo compartment. 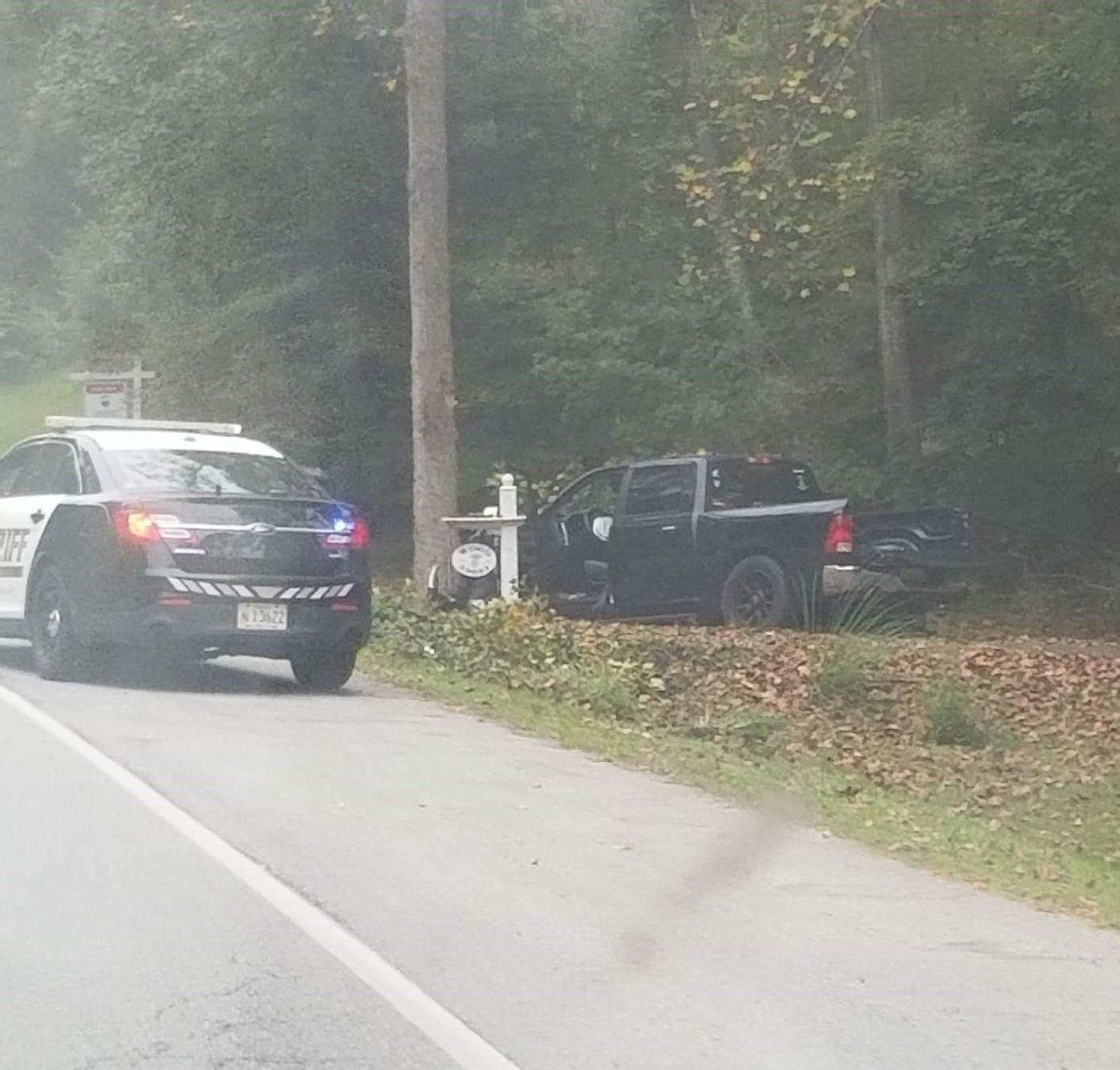 Units respond to a crash off Golden Beach Road in Mechanicsville last Saturday morning, where a truck crashed into a tree.

Deputy state fire marshals are investigating a White Plains vehicle fire which occurred at 6:30 a.m. on Monday, according to a notice which says the owner, Luis Bernal, discovered the fire which investigators determined was started in the cargo compartment.

Units respond to a crash off Golden Beach Road in Mechanicsville last Saturday morning, where a truck crashed into a tree.

Deputy state fire marshals ruled a fire at a Waldorf assisted living facility last Friday night as accidental, citing an unattended candle on the outdoor patio igniting combustible materials. The fire at the Mandeville House off Fern Hill Place destroyed an estimated $450,000 of the structure and its contents, and injured one of the 69 firefighters present.

The firefighter was treated and released, the fire marshal’s office said in a notice, and the eight occupants of the home have been relocated to another facility.

Trevian M. Smith-Richardson, 25, was unable to provide his name several times last Friday evening, charging papers say, after being pulled over by police, who wrote in charging papers the license plate on his car read back as a vehicle stolen in Arlington, Va., from a woman who dropped her car keys outside.

Smith-Richardson later told police he had borrowed the vehicle from a man named “Rick” for a week for $900, charging papers say.

When shown a photo of Mark David Chapman, the man who killed John Lennon, and asked if it was “Rick,” Smith-Richardson told police he was “50/50,” charging papers allege.

Smith-Richardson was arrested, charged and released the following day.

A Waldorf woman was issued a criminal summons following allegations she punched her boyfriend in the face in an argument about him taking the living room television early on Sunday morning. Nina Kellerman, 35, was charged with second-degree assault and malicious destruction of property following the incident where she is accused of punching her boyfriend after he said he was leaving and would take the television with him.

A Leonardtown father was jailed Saturday on witnesses’ accounts he had pulled out a shotgun in an argument, and the alleged victims’ account he had pointed the shotgun at them.

Charging papers allege Patrick Wayne Martin, 34, had brandished the shotgun after discovering through security cameras his girlfriend was moving out with the assistance of people he did not know.

Martin was arrested and charged with two counts each of first- and second-degree assault.

A Lexington Park man who was shot earlier this year was apprehended by police on allegations he fled the scene of a suspicious vehicle check where drugs and a stolen handgun were found. He also allegedly punched a witness and resisted arrest. Tyquan Samuel Wills, 21, allegedly fled the scene after being parked in front of a private residence on Devin Circle when asked about the smell of marijuana emitting from the vehicle he was in last Wednesday.

Two “concerned citizens,” Ronald Matthew Carter and Dale Anthony Carter, attempted to apprehend Wills. Dale Carter was punched in the face by Wills, charging papers say, and Wills attempted to pull a handcuffed arm away from an officer later on after cuffs were placed on one wrist.

A search of the vehicle found multiple bags of cocaine and a digital scale, as well as a loaded Glock 21 .45-caliber handgun under the front passenger seat, which police say was reported stolen in St. Mary’s County on March 5.

Wills was charged with several firearm and drug violations, as well as second-degree assault and resisting arrest. He was released following a bail review.

Wills was identified by state police as the victim of a shooting in the early morning hours of Aug. 13, where he left the scene and later called 911 from his home. He was then airlifted from his home to a shock trauma center, according to state police.

Jaden Arnold, a member of Boy Scout Troop 420 in Leonardtown and freshman at St. Mary’s Ryken High School, created the spot with his crew for his Eagle Scout project, according to a release from the sheriff’s office that says the designated spots are under video surveillance.

A cook at a restaurant in Solomons was jailed Monday on allegations he touched a female child inappropriately at a home.

Charging papers allege Brian Cullen Sheridan, of no fixed address, “rubbed [the girl’s] crotch” for a brief period of time before she alerted her mother, who questioned Sheridan.

Sheridan told the girl’s mother he had been asleep and dreaming when the incident happened, charging papers say, and did not speak to police about the incident.

Sheridan was arrested and charged with second-degree assault, perverted practice and a third-degree sex offense.

A 19-year-old Lexington Park man was arrested in Calvert County following an alleged car chase throughout the county early on Saturday morning.

Nathon Javon Allen allegedly traveled at about 110 mph through multiple red signals in a Ford Fusion after turning onto southbound Route 4 from its intersection with Route 2, drove over officers’ stop sticks and lost a piece of his vehicle’s grill throughout the course of the chase, eventually traveling south in the northbound lane of Route 4 before meeting a stationary road block near Flag Ponds Parkway.

Allen allegedly told police he had fled because he was at “a girl’s house” and a man “brandished a gun, and he believed that [Calvert Deputy Anthony Aranda] was associated with this unknown male,” according to charging documents.

Allen was issued 23 traffic citations and a criminal charge for destruction of property from when a piece his vehicle’s grill allegedly damaged a police cruiser.

A 38-year-old Prince Frederick loan officer faces a second-degree rape charge following an incident last Monday, Oct. 5, where an adult female told investigators he had made inappropriate physical advances after she had recovered from a seizure in his home. Charging papers accuse Torrey Jermain Bryant of approaching the woman in the early morning hours that day, after she had suffered a seizure, and making unwanted physical advances, which culminated in him grabbing her hand to “make her touch his penis.”

The woman told officers she had informed Bryant’s wife, who she said called her friends, who had witnessed the incident, and “asked them to lie to the police in support of Torrey.”

In a police interview, Bryant allegedly confessed to some acts, but “minimized his role and attempted to portray the sexual contact as innocent and a misunderstanding.” Bryant was arrested and charged with second-degree rape as well as third- and fourth-degree sex offenses, as well as second-degree assault.