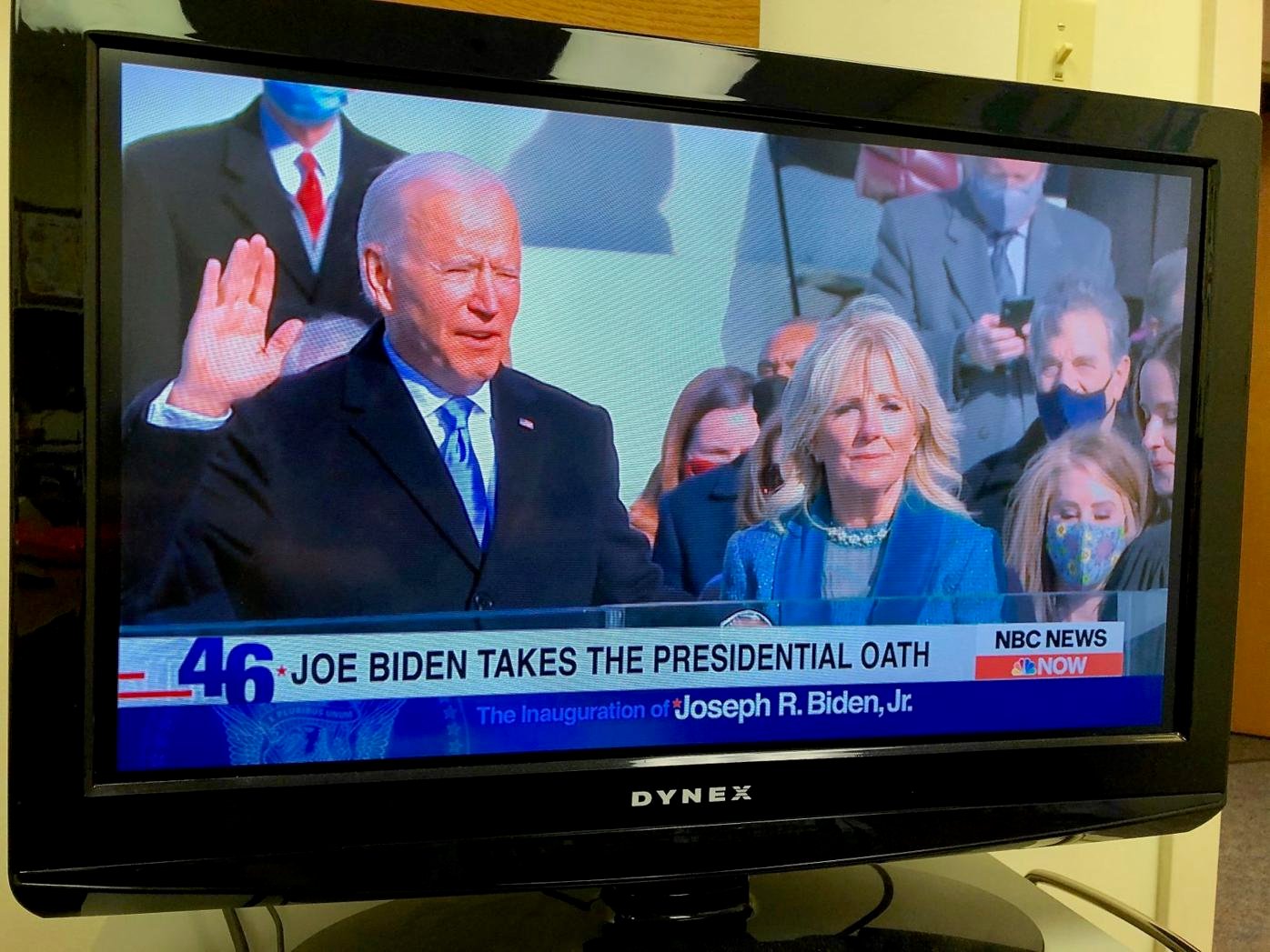 A number of Americans watched Joe Biden, standing next to his wife, Jill Biden, be sworn in as the 46th president of the United States on Wednesday from their televisions at home. 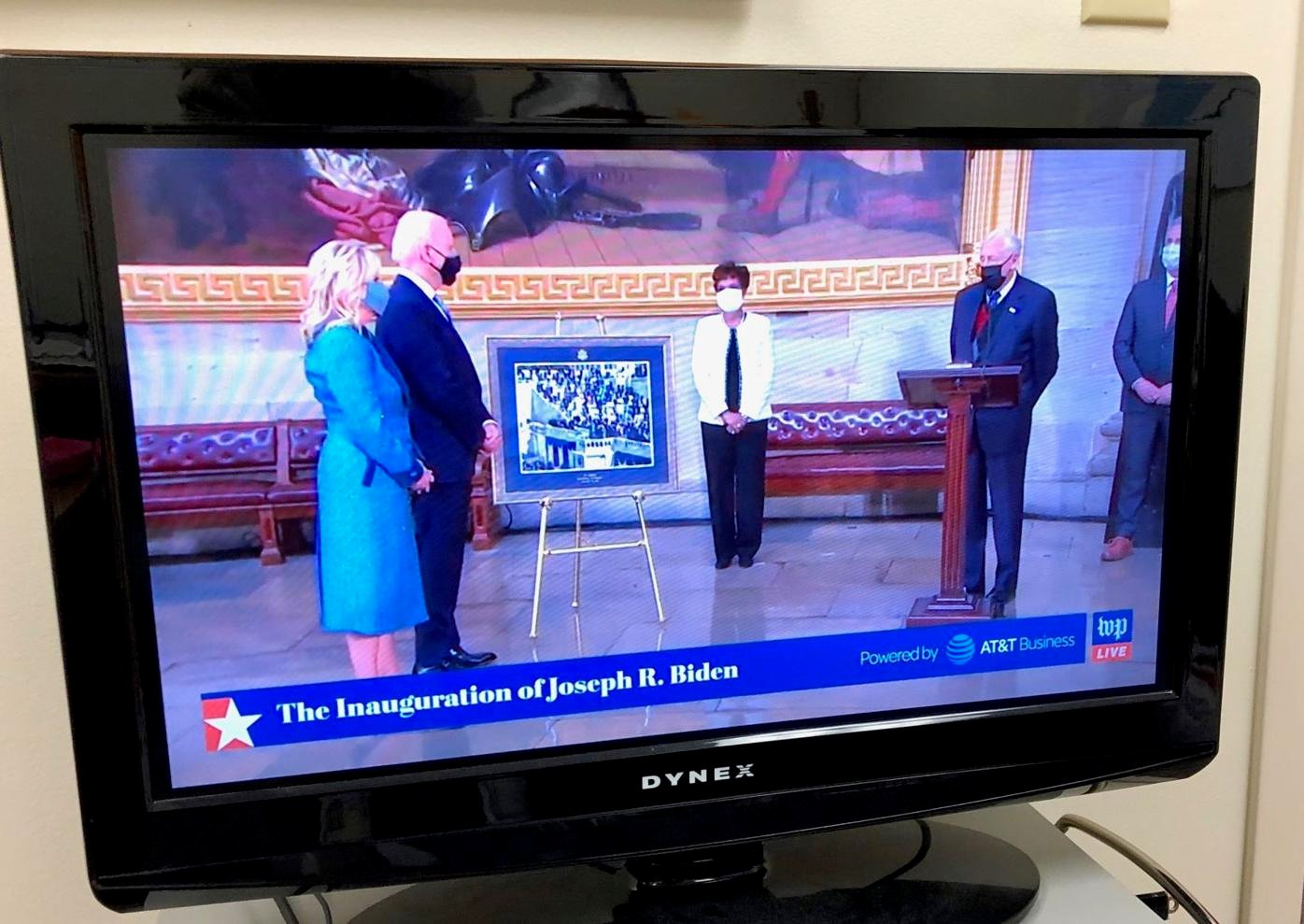 A number of Americans watched Joe Biden, standing next to his wife, Jill Biden, be sworn in as the 46th president of the United States on Wednesday from their televisions at home.

The inauguration of Joe Biden as the 46th president of the United States looked very different than those of his predecessors due to the ongoing COVID-19 pandemic and heightened security concerns after a mob identified as supporters of the previous president violently stormed and broke into the U.S Capitol earlier this month.

Rather than crowds of people congregating for the event, most Americans watched the ceremony from their televisions and computer screens. Those physically in attendance mostly consisted of members of Congress and their guests, along with former presidents Barack Obama, George W. Bush and Bill Clinton, and their spouses.

Former President Donald Trump, however, was not in attendance, which broke 150 years of tradition symbolizing a peaceful transfer of power.

U.S. Sen. Amy Klobuchar (D-Minn.) said the day marked a number of “historic firsts” as Vice President Kamala Harris was the first woman to be elected into the role, as well as the first Asian American and African American. Harris (D) was sworn in by Supreme Court Justice Sonia Sotomayor, “the first Latina justice to ever serve on the Supreme Court,” Klobuchar said Wednesday morning.

Afterward, Biden, a Democrat, was sworn in by Chief Justice John Roberts on the Capitol’s West Front. In his inaugural address he laid out his vision to unify and heal the nation.

“We’ll press forward with speed and urgency … there’s much to repair, much to restore,” the new president said during his address. “With unity we can do great things, important things. … America will once again be the leading force for good in the world.”

After the inauguration on Wednesday, Maryland Sen. Arthur Ellis (D-Charles) shared with Southern Maryland News he was “happy to see” the inauguration “went through successfully.” Although he said “it’s unfortunate” more people couldn’t attend because of the pandemic and the recent insurrection at the Capitol, “it was great” to witness the peaceful transfer of power.

“I pray we continue to have peace … and work together in a civil manner,” he noted, encouraging those who are unhappy with the government, rather than acting violently, to “get involved” by running for office or volunteering, “working to make change” constitutionally.

“That’s the way we do it in this country,” he said.

Calvert County Commissioner Tim Hutchins (R) noted the “contrast” between the inauguration Wednesday and the events at the Capitol earlier this month.

“Here in the same place, we are showing exactly who and what we are as a nation,” he said of the peaceful transfer of power. “It’s time to demonstrate who we are … and protect liberty for all.”

He noted the inauguration was a “very important event that sends a message to all,” and it is a “step forward into a new chapter in our history.”

Hutchins claimed he was “struck profoundly” by the site on the Capitol steps, of the first female vice president and former Vice President Mike Pence (R) conversing, setting the tone for how the country should work with one another moving forward.

Marcia Greenberg, a community activist in St. Mary’s County, said on Wednesday the “genuine effort to make it clear everyone is included in the fight to improve the country” was striking to her.

“The message to everyone from this president is he believes in everybody, he believes in unity,” she said. While the country is facing “incredible challenges ... the only way” to move past them “is if we do it together.”

She said the inauguration “walked the talk,” and added that she hopes “friends and neighbors will hear the call.”

U.S. Sen. Chris Van Hollen (D-Md.) said in a statement on Wednesday, “Today we witness the historic swearing-in of Joe Biden and Kamala Harris to serve as our next president and vice president of the United States. As we turn this new page, I’m filled with hope for a brighter future. While our nation faces some of the most difficult challenges in our history — from tackling the health and economic impacts of the COVID-19 crisis, to rooting out systemic racism and inequality, to addressing the pressing threats of the climate crisis — I am committed to working with the new administration and my colleagues in Congress to meet these challenges head-on.”