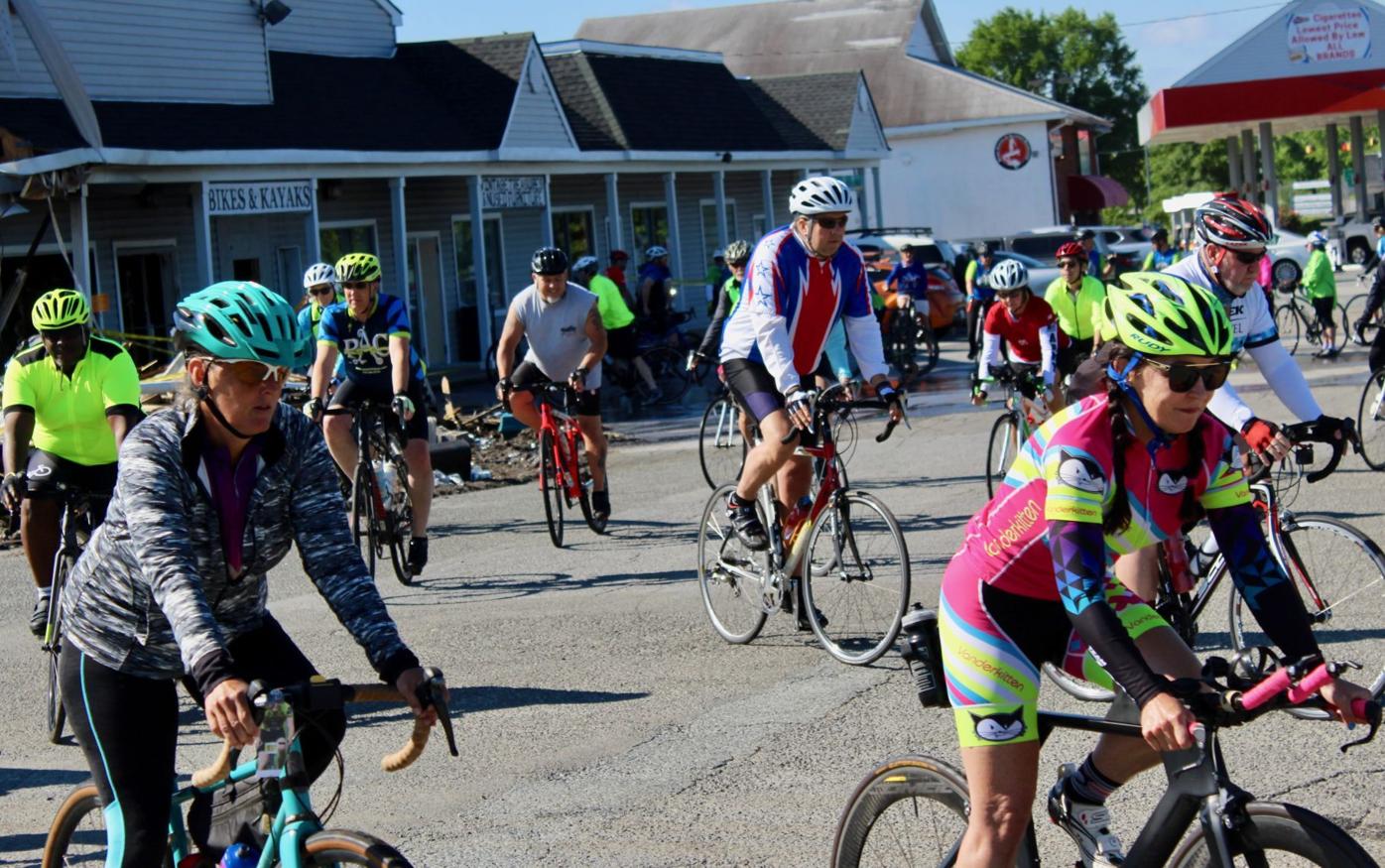 Over 60 cyclists participated in Monday’s ride that began in front of what had been Patuxent Adventure Center, one of the Solomons businesses that burned in a fire last month.

Cyclists demonstrated support for Patuxent Adventure Center one week after the Solomons business was destroyed by fire.

Over 60 cyclists participated in Monday’s ride that began in front of what had been Patuxent Adventure Center, one of the Solomons businesses that burned in a fire last month.

Cyclists demonstrated support for Patuxent Adventure Center one week after the Solomons business was destroyed by fire.

Monday was a beautiful day for a ride. The start of 60 “Average Joes” cycling in groups from Solomons to Drum Point and back was a bit surreal, though.

The pedalers, mostly members of Solomons Island Cycling, gathered in the shadow of the Patuxent Adventure Center, known as PAC, an emporium that sold, rented and serviced bicycles and paddle sports vessels. One week prior, the business and its neighbors in a strip mall on HG Trueman Road was destroyed as fire departments from four counties battled a three-alarm fire, which caused $3 million in damage.

The odor of smoke could still be detected Monday morning at the site and it was clearly evident that the Solomons Veterinary Center and PAC had bore the brunt of the inferno, which investigators determined originated in a camper trailer located behind the businesses.

“There have been so many messages and so much outreach from the community about the way forward and how everyone can help,” Brad Hall, Solomons Island Cycling president, stated in a letter last week to the group’s members. “The club board of directors held an emergency meeting to digest the feedback we received and discuss in the near term what we could do. Ultimately, the number one thing that we can do to show our support, right now, is to show solidarity and what we do best. We can ride our bikes.”

The ride had originally been scheduled for Saturday, May 29. However, predictions of heavy rains, which did materialize, prompted club officials to reschedule for Monday, Memorial Day.

Hall noted that the previous owners of the shop had started the Average Joe Ride before the Solomons Island Cycling club was even established. The ride is a round trip of approximately 14 miles.

The islanders were joined by members of other bicyclist clubs, including Southern Maryland Mountain Bikers, Hall said.

“When the club formed, the shop asked and we took over the hosting of this ride,” he told Southern Maryland News.

Prior to the race, with their backs to the sun, the ride participants gathered for a group photo. The new owners of PAC — Jeff and Laurie Lemieux — participated in the ride and stood with the others as the members in the front held placards that spelled out #PACSTRONG.

The Lemieuxs, who also own a cycle shop in Prince George’s County, only recently purchased the Solomons business.

“This bike shop was there for me when I became a cyclist,” Hall, a Lusby resident, told the owners. “We’re going to be here for you as you get started.”

In addition to loyal customers, the governments of Calvert County and the Town of Leonardtown have reached out to provide assistance, Jeff Lemieux told Southern Maryland News. “We’re getting started with insurance claims. We are also scoping out alternate locations.”

“There will be a brand new shop,” Hall declared in his letter to Solomons Island Cycling members. “Insurance will replace bikes and parts. Time heals all wounds and so too shall all things be made whole again, given the time to do so. Until then, we’ll do what we can — we’ll ride — new faces, old faces, familiar faces and miles of smiles.”