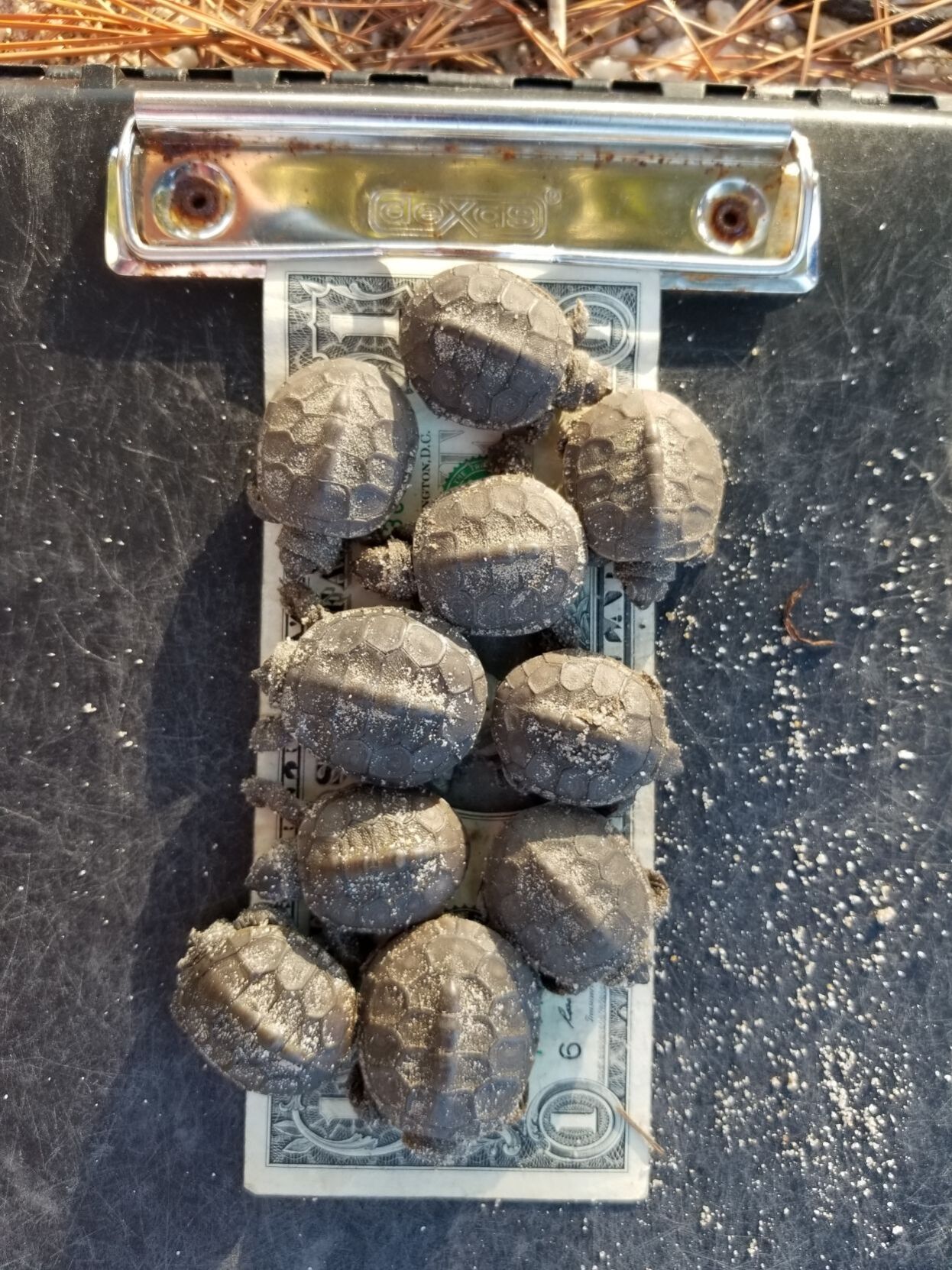 Northern Diamondback Terrapins, North America’s only estuarine turtle, are about the size of a quarter when they emerge as hatchlings. Terrapins have a low egg-to-hatchling survival rate, as nests often fall prey to predators. 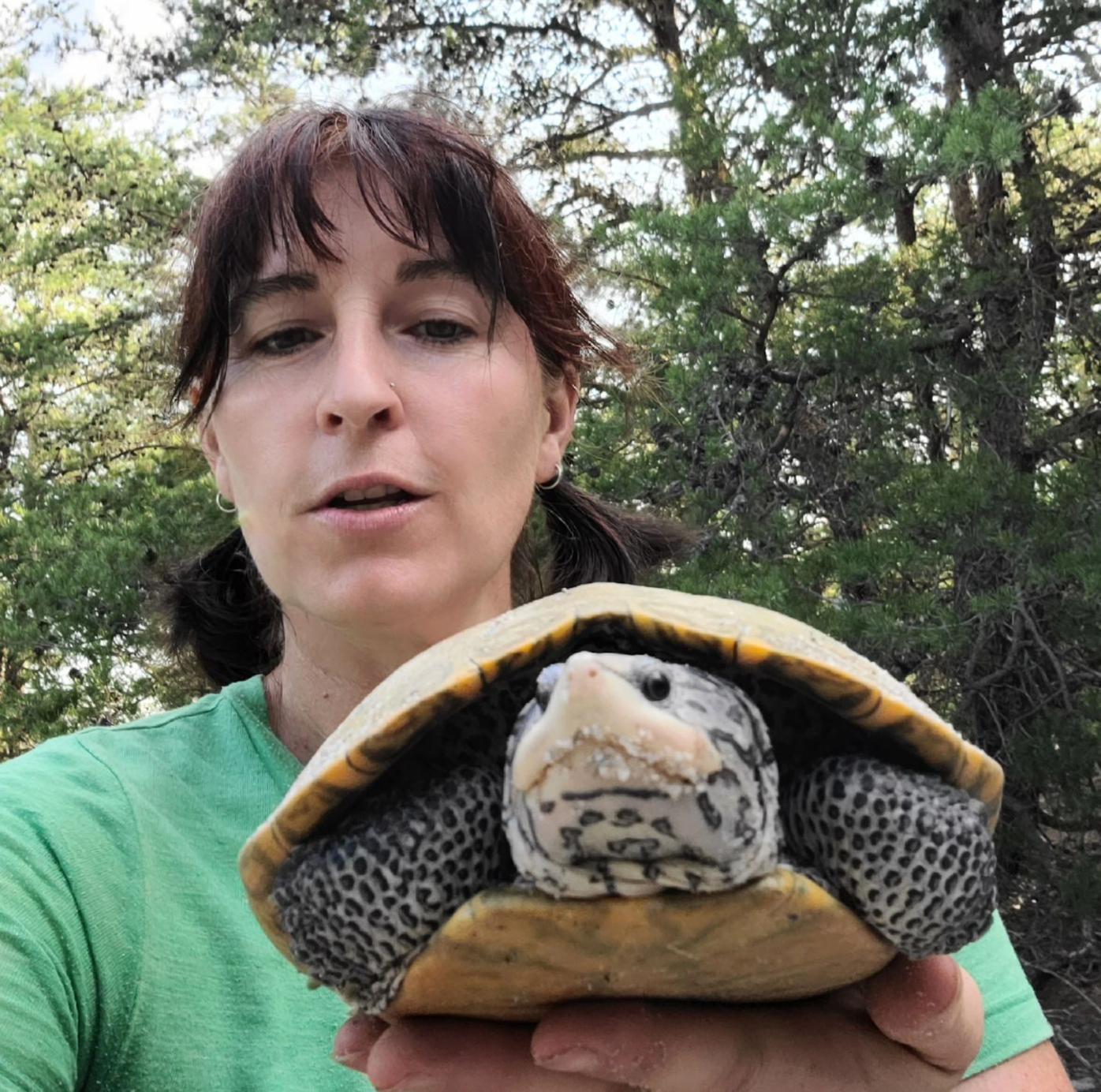 Rebecca Stump, a Student Conservation Association intern who is currently leading the seven-year ongoing effort to track and record data about the Northern Diamondback Terrapin population at NAS Patuxent River, holds up a female terrapin which had just deposited her eggs.

Northern Diamondback Terrapins, North America’s only estuarine turtle, are about the size of a quarter when they emerge as hatchlings. Terrapins have a low egg-to-hatchling survival rate, as nests often fall prey to predators.

Rebecca Stump, a Student Conservation Association intern who is currently leading the seven-year ongoing effort to track and record data about the Northern Diamondback Terrapin population at NAS Patuxent River, holds up a female terrapin which had just deposited her eggs.

Since the end of May, a group of dedicated volunteers has been combing the beaches at NAS Patuxent River trying to learn and document what they can about the installation’s Northern Diamondback Terrapin population and their nesting habitat.

Pax River’s open white sandy beaches, dunes and maritime forest provide the terrapins an ideal environment — one that is becoming sparser throughout the state. The species, once plentiful, now struggles to survive not only due to loss of nesting beach habitat and water quality degradation, but increased mortalities from boat collisions, road mortality, and unintentional drowning in crab cages.

“Because terrapin studies in Maryland show the species is in trouble, we want to do what we can with our habitat,” said Jackie Smith, natural resources specialist with the Pax River Environmental Division, who is overseeing the program. “Aside from some material cost and the minimal cost of having a Student Conservation Association volunteer to conduct some surveys and manage the project, the bulk of the field work is done by local volunteers who’ve become passionate about terrapin conservation.”

All in the name of seeking data and protecting the nests

Seventeen dedicated volunteers — most current or retired Pax personnel — completed the required training and scour the beaches twice each day searching for subtle signs of nesting, like tracks in the sand or disturbances such as churned up sand.

“When a nest is found, we uncover, weigh and measure the eggs, replace them, re-cover, and then place a predator exclusion device over the top” to protect the nest, explained Rebecca Stump, the SCA intern who has headed the terrapin survey onboard Pax River for the past four years. “When hatchlings begin to emerge 50 to 80 days later, we weigh and measure each hatchling and then release them into the marsh or surrounding forest. By carrying them from nest to release site, no scent trail is left for predators to follow the hatchlings.”

This year has shown a huge increase in predator activity and Stump has a theory as to why that might be.

“There is three times as much nest carnage this year as in all previous seven years” since the survey began in 2013, Stump noted. “Predators, which include raccoon, skunk, fox, and possibly coyote, are active during the day and seem to have learned that human smell is linked to the presence of eggs. I can walk through an area, stop along the way to dig in potential nesting spots, and then come back through an hour later and all of the spots where I had dug are now violently dug up. Each [volunteer] shift is a race to beat the predators to the undiscovered fresh nests. To date, we have protected 88 nests [this year].”

Vital to the work being done, is the cooperation afforded the survey by Pax River’s Air Operations division.

“They’ll close down a helicopter landing area by switching to an alternate site for four months,” Smith said. “This allows us to cage and protect those nests with materials that would otherwise be FOD, or foreign object debris, and be a hazard to landing. It also allows us to safely work with the nests in that [landing] area.”

Working in partnership with the U.S. Fish and Wildlife Service, the Navy believes in contributing to the continued research of the species, which is an important resource ecologically and economically. Research goals include determining and documenting breeding success, local population demographics, hatchling and adult survival and mortality rates, and longevity — in addition to simply helping to sustain healthy populations of terrapins in the region.

“The data is captured in the natural resources management report I prepare each year that ultimately becomes part of a Department of Defense report to Congress,” Smith said. “It’s also reported to USFWS, and is used to some extent by a researcher at the University of Maryland Center for Environmental Science at the Chesapeake Biological Laboratory in Solomons. We also collaborate with CBL to provide access for their research.”

While conducting their research this year, the volunteers are also dealing with the unique challenges presented by COVID-19.

“In the past, we’ve shared a backpack and tools [such as digital calipers and spoon scales], but this year everyone had to create their own ‘terrapin kit,’” Stump said. “Some volunteers purchased their own tools and others are using tools donated to them by generous individuals. We take digital notes and text each other information and photos. Very little physical contact between people has occurred during the season and social distancing is being observed.”

The volunteer team will be on the job through September and Stump appreciates their efforts.

“Our volunteers endure wind, rain, excessive heat and humidity, sunburn, biting flies, and scratches from getting to that tough to reach patch in the briars,” she noted. “They go the extra mile every day. Finding the nests is difficult and requires much stalwart dedication, but the effort is worth it when baby terrapins appear and photo opportunities abound.”