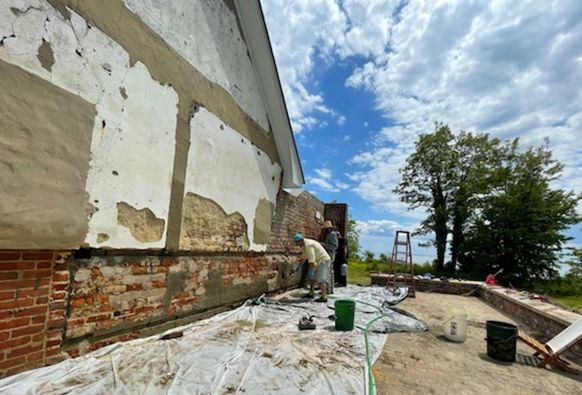 Volunteers work on repointing the west-facing wall of the only remaining ruin of the Jesuit’s 300-year presence at St. Inigoes. Standing on land now occupied by Webster Outlying Field, the wall was stabilized using historically appropriate materials to help stop its erosion. The building attached to the wall is 19th century construction that had already been stabilized by the Navy over the years. 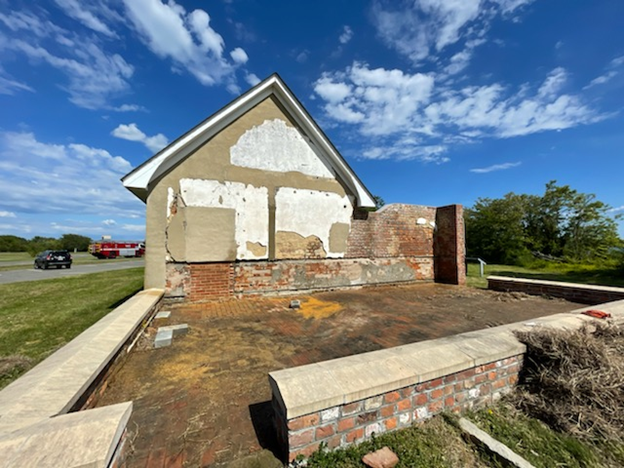 Volunteers work on repointing the west-facing wall of the only remaining ruin of the Jesuit’s 300-year presence at St. Inigoes. Standing on land now occupied by Webster Outlying Field, the wall was stabilized using historically appropriate materials to help stop its erosion. The building attached to the wall is 19th century construction that had already been stabilized by the Navy over the years.

A group of volunteers turned out on two days in May to help repoint a section of wall still standing from the mid-1700s manor house once occupied by Jesuits at a historic site known as Priest’s Point, onboard what is now Webster Outlying Field.

“It is the only surviving wall of the mid-18th century manor dating back to when the site was the location of the Jesuit mission complex,” explained NAS Patuxent River Cultural Resources Manager Craig Lukezic, an archaeologist by profession, whose role includes the stewardship of historic properties on Navy-occupied lands.

Before the Navy acquired the land from the Jesuits in 1942 to construct Webster Field, it had served as the original site of St. Inigoes Manor, the founding mission for the Jesuits in English North America. The site quickly became a self-sufficient thriving acreage that helped finance the Jesuit mission to educate and convert Native Americans and colonists.

“The Jesuits first started their mission in 1637 at a location at Old Chapel Field, but later moved to Priest’s Point and built a very nice house,” Lukezic said. “They were of the educated class, so they were basically displaying their status and importance by doing that. If you were rich and powerful, you had a big home on the water so you’d get a nice breeze in the summer. And since everyone traveled by water at that time, you had a very high profile.”

The house at Priest’s Point was originally built in the mid-1700s but most of it was destroyed in a fire in 1872. Lukezic noted that another house — the one that exists today — utilized the remaining standing wall, and was built in the former manor’s footprint, although it is different and much smaller.

“The surviving west wall was originally an interior wall of the larger [1700s] manor house’s kitchen, but it’s now on the exterior, exposed to the elements,” Lukezic added. “Last year, when I looked at it, I saw it was in terrible shape with cavities as big as bricks.”

Lukezic explained that builders of the period would use handmade bricks poorly fired onsite for interior walls, referring to them as basically “glorified adobe.”

“The plaster on the interior wall, which is now on the exterior, was falling off, and the soft brick underneath was deteriorating,” Lukezic said. “It was never meant to be exposed to weather. There had been patchwork done to some of it, but most of the plaster had fallen off and the bricks were eroding like crazy. I got extremely concerned and decided to round up the necessary materials and put out a call for volunteers to help.”

Knowing historical house materials are softer than modern brick, and if old brick is repointed with modern material it can cause spalling during the freeze/thaw process, Lukezic ordered a special lime to ensure the job would be done correctly.

“It’s specially slaked lime imported from Ireland that has to be fired at a different temperature than garden lime,” he noted. “One volunteer was particularly knowledgeable and we mixed it with local sand on site.”

The Naval District Washington fire department at Webster Field — whose station is located across the road from the Priest’s Point wall — was extremely helpful in making sure there was water and a hose available to the workers on site.

“They were vital to the success of the project,” Lukezic said of the fire fighters. “Everyone at Webster was supportive of the project; it was very pleasant.”

Before the volunteers could begin repointing the brick wall, they had to gently and conservatively dig out loose debris and bad mortar and clean it by brushing it off and hosing it down.

“There were cavities near the floor dug by groundhogs that we had to clean out and make safe,” Lukezic said. “We pulled all vegetation and cleared the area. The first day was all that prep work and it took all day. The second day was mixing the mortar, filling in the cavities, and doing the repointing. I expect it to take about a month to fully cure.”

The Webster Field site is an important historic cultural resource, as the St. Inigoes Jesuit plantation represents one of the oldest English footholds in Maryland. The manor house, designated as Building 8001 at Webster Field, is the only standing ruin of the Jesuit’s 300-year presence.