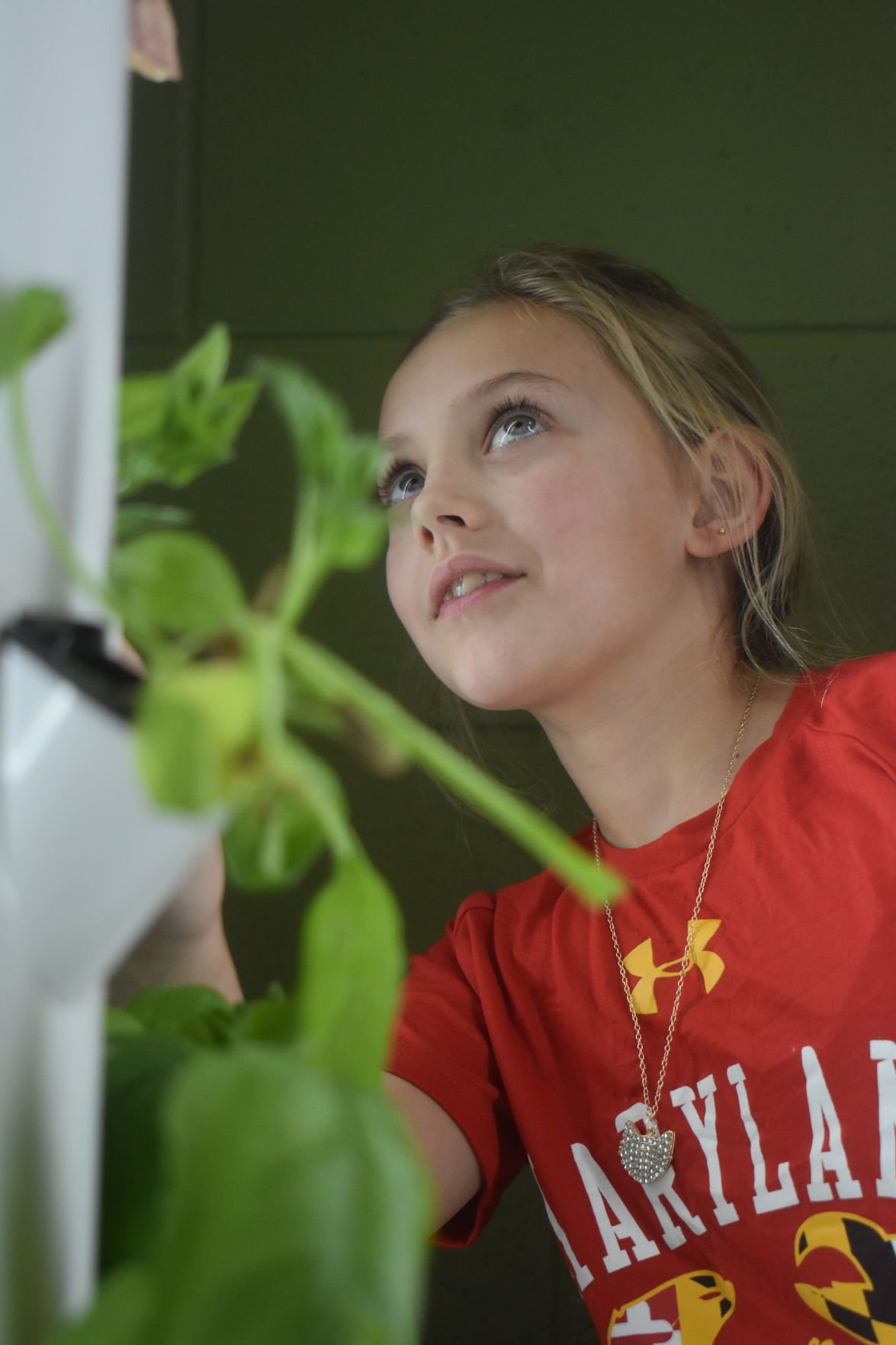 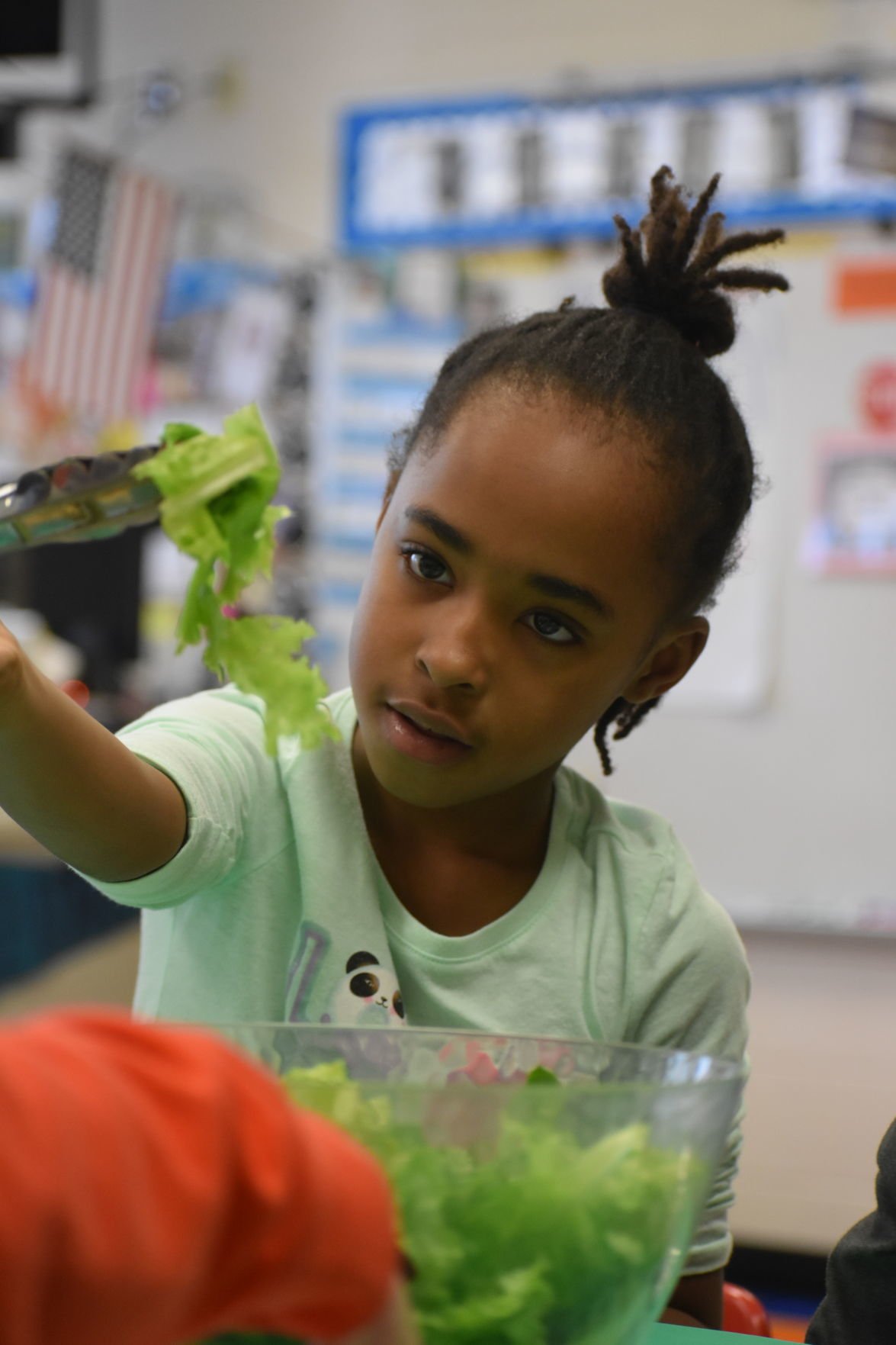 Third-grader Laiana Brown helps herself to some fresh lettuce from the tower garden. 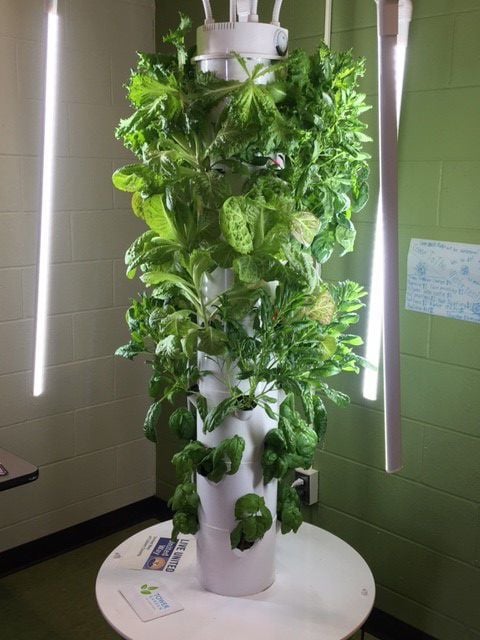 The tower garden, which this year has produced lettuce and basil, has helped students learn about science and food. 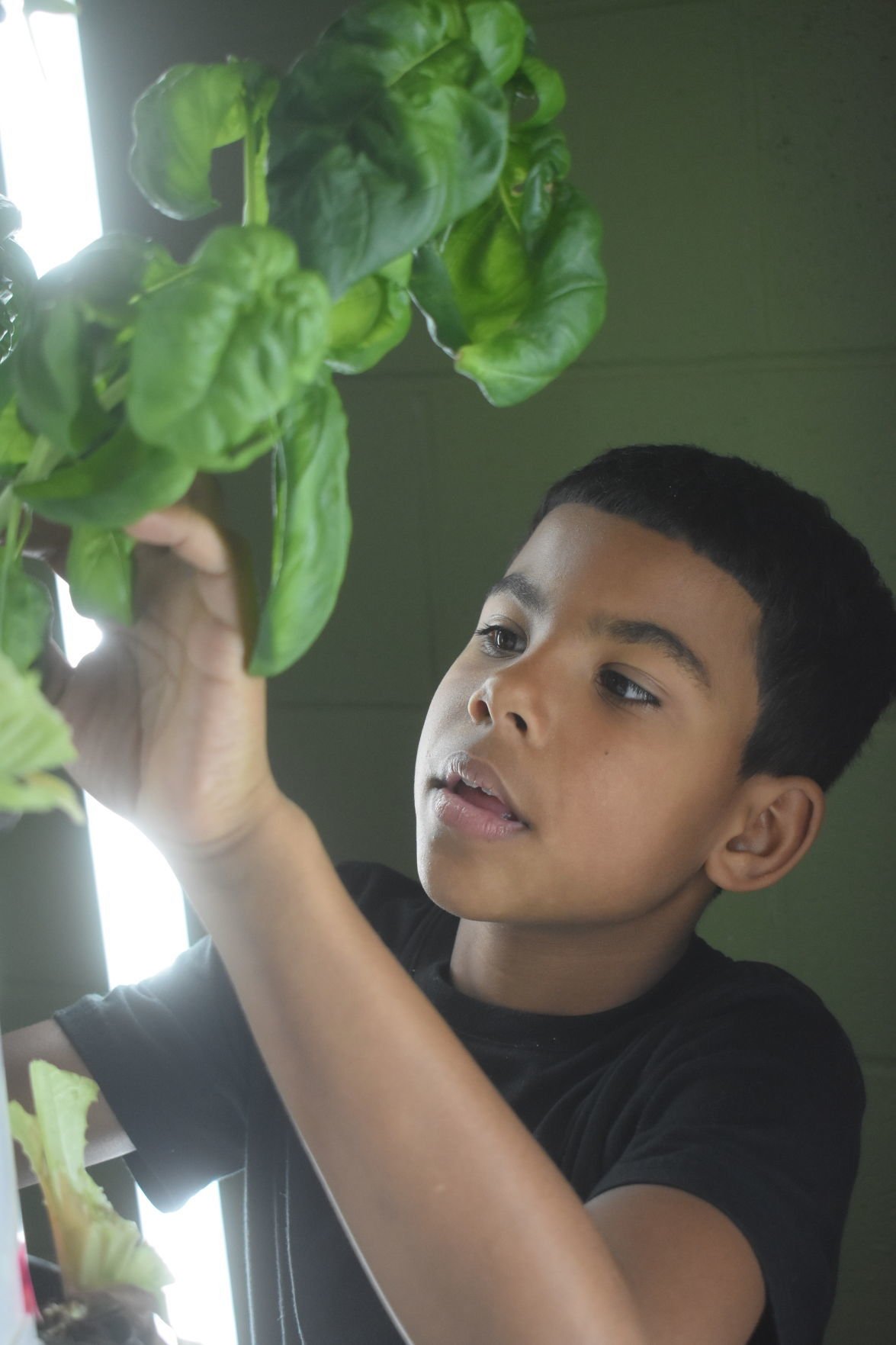 Barstow Elementary School third-grader Lyndon Johnson inspects some of the produce on the school’s tower garden. 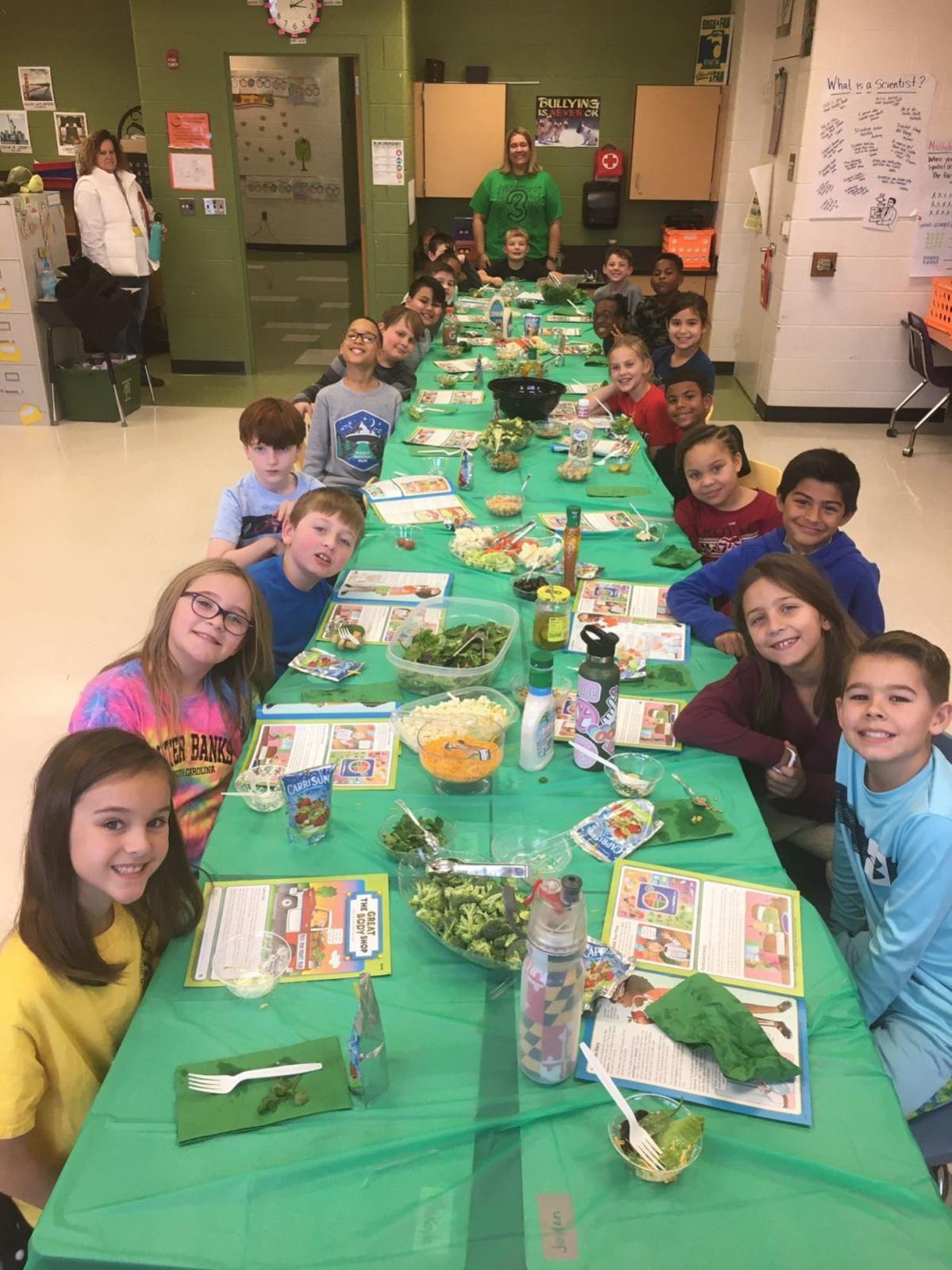 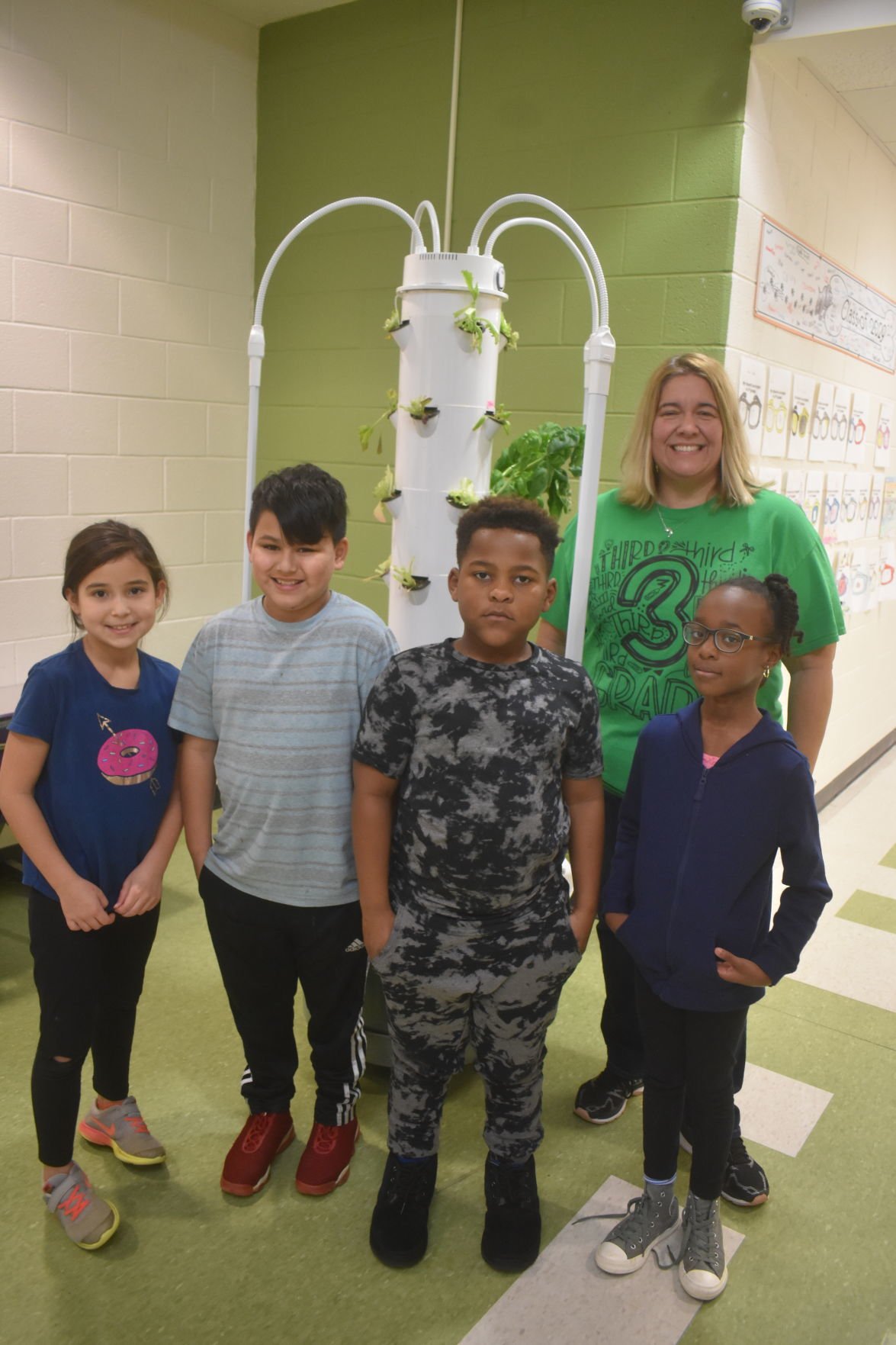 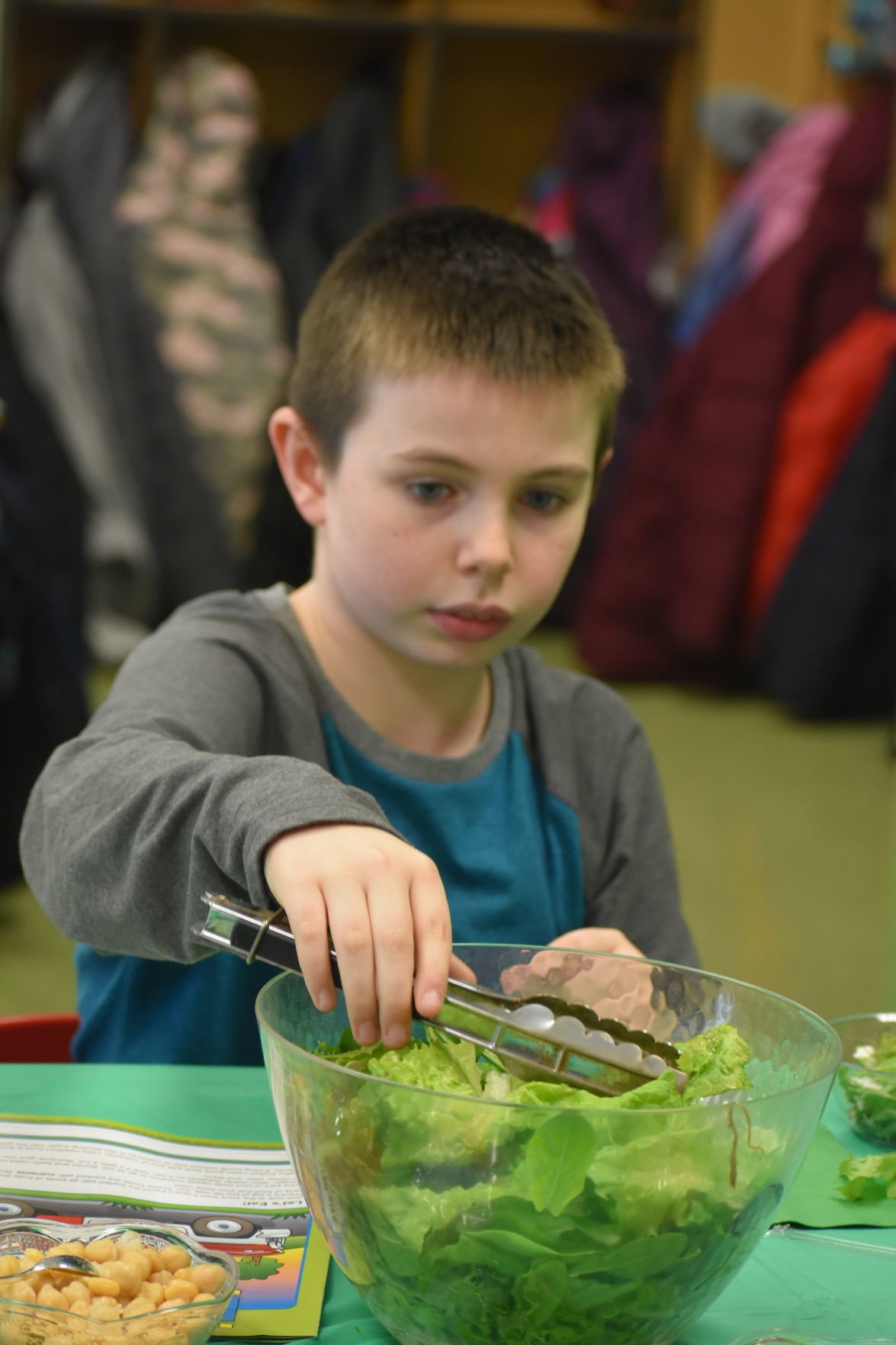 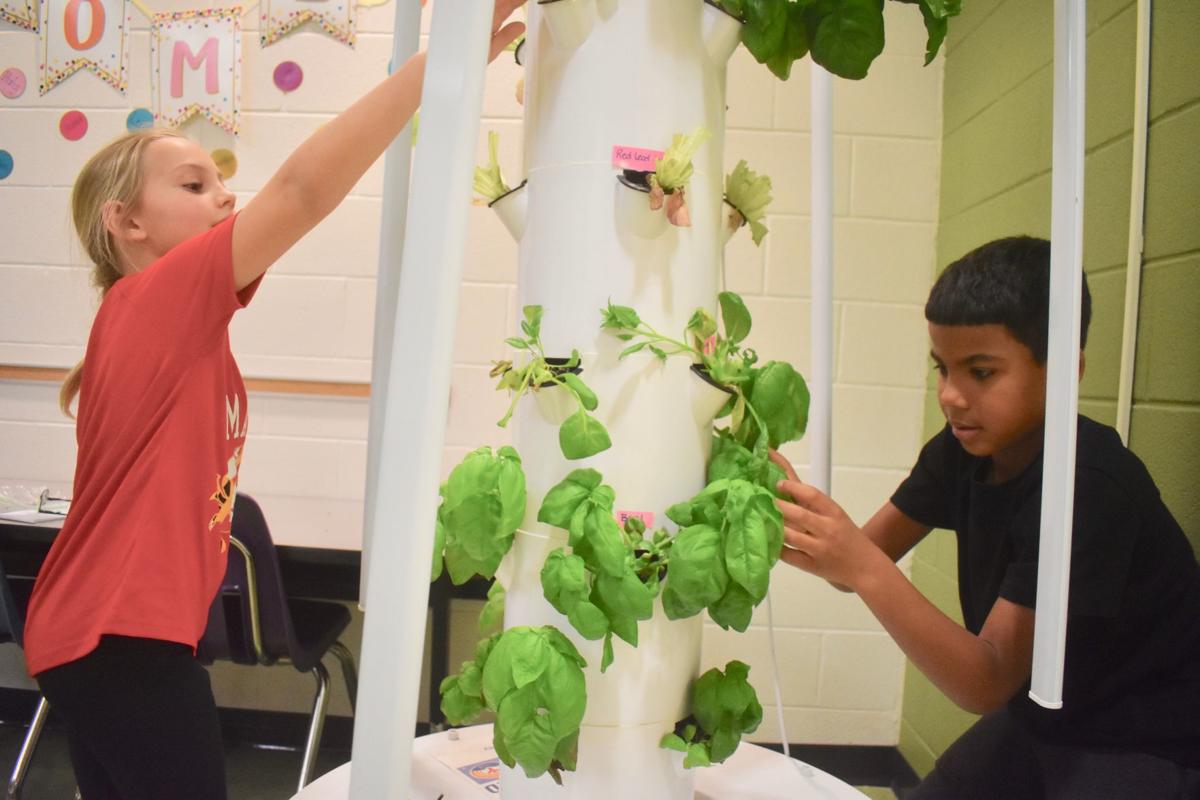 Third-grader Laiana Brown helps herself to some fresh lettuce from the tower garden.

The tower garden, which this year has produced lettuce and basil, has helped students learn about science and food.

Barstow Elementary School third-grader Lyndon Johnson inspects some of the produce on the school’s tower garden.

With a pair of salad tongs in her hand, Kami Roberts reached across the table and picked up a large bunch of lettuce leaves which she dropped in her bowl. After adding a few more items to her salad, Roberts dug in.

The Barstow Elementary third-grader was clearly enjoying her midday snack, and why not? The lettuce was about as fresh as it could be. After all, it had been harvested in a few minutes and a few feet away.

These are the benefits of tower gardens, which allow school children to plant, water, take care of and harvest their gardens mere feet away from their classrooms.

“The first time I showed them some pictures and said, This is what we’re going to be doing this year’ they were like, ‘Ooh’ and ‘Ahh,’” said Barstow fourth grade teacher Wendy Jones, who started the project last year. “But they weren’t really amazed until they saw it all hooked up. And then they were looking at it like it was an alien with all the lights coming out. Even the little pre-Ks were amazed.”

“Farming is a forgotten art, but the process from planting a seed through harvest are all teachable moments about life and choices if you take care of something and nurture something,” said Farming4Hunger founder and CEO Bernie Fowler Jr., who is trying to get one of the gardens in every elementary and middle school classroom. “If you just walk away, weeds will grow and stuff will get into it. It’s no different than our children; if we just let them out and say good luck, what’s going to happen, so we use those examples about strangers and manners and respect. It’s a great teaching tool to learn about agriculture.”

The tower gardens are currently in 92 schools in Maryland, including nine in Calvert – there will be 18 by the end of next week – and 25 in Charles County and 24 in St. Mary’s county.

“Everyone rotates by doing jobs: cleaning, watering, checking the water level and checking the roots,” Jones said. “It has taught them responsibility and gardening. And it’s amazing. They won’t even clean at home, but they’ll come in here and want to do their jobs.”

“The younger students really can’t wait to be a part of this because it really is something special,” Barstow Principal Michelle Ward said. “And the parents are excited because the kids are trying something they wouldn’t have tried before.”

The tower gardens, which are manufactured by a company in Tennessee and cost almost $1,000, can grow up to 28 different vegetables, though Fowler said they are best for growing greens and herbs.

The students planted basil, red and romaine lettuce in November and the produce was ready for harvesting a few weeks later.

“I wanted to do a salad day, so we needed something that would grow quickly,” Jones said. “And those were the easiest and quickest to grow so you can see the yield faster.”

And the students took to the project in seconds.

“I don’t really have a job, but if I did it would probably be measuring all the plants,” said student Anna Simmons, who added she was shocked at the garden’s growth when she returned to school following the holiday break. “On Christmas break, I was thinking about how big it might be when I got back, and actually, I didn’t expect it to be this big. I thought it would be a little smaller, but it’s grown a whole lot.”

“When winter break was over, I was walking down the hall to come back, and the tower garden was just huge,” said third-grader Sammy Merriman. “I was just thinking it would be the same because nobody would have been here to water it or anything.”

This is the second year the school has had the garden.

“I think this is authentic learning and something they’ll remember,” Ward said. “They might forget things we gave them in a textbook or showed them online, but when they are watching something grow every day and how if they water or don’t water it or if they’re harvesting it, they talk about it, so it really builds our whole community.”

And the fruits – or vegetables – of their labor came to fruition when the garden was harvested and a salad bar complete with broccoli, olives, cherry tomatoes, croutons and shredded cheese and the prized leafy greens was set up for the students.

“I didn’t really like lettuce, but then when I tried it, I liked it,” said student Marcos Santoyo, who added cheese and croutons to his salad. “I’ll eat it again. It’s been a cool experience, and it’s fun how you can see it growing every day.”

“The lettuce was very fresh and crispy and way fresher than the grocery [store] lettuce,” Simmons said. “It was super yummy and just very, very nice.”

“It tastes a lot better than the [lettuce] at the store,” said Merriman.

Jones added, “We had one student last year who had never had a salad. He said his dad never makes him eat salad, and I said, ‘No, I’m not going to make you eat salad, but if you’d like to try it, you can.’ He was hesitant, but I look down, and he had a bowl full of lettuce because he saw everyone else eating it.

But student Lyndon Johnson, who loved the lettuce, was not quite ready to completely envelop the whole salad thing.

“Oh no, the cherry tomatoes are a no-go,” he said.

Sponsorships for the tower gardens are available for full school years and half school years.