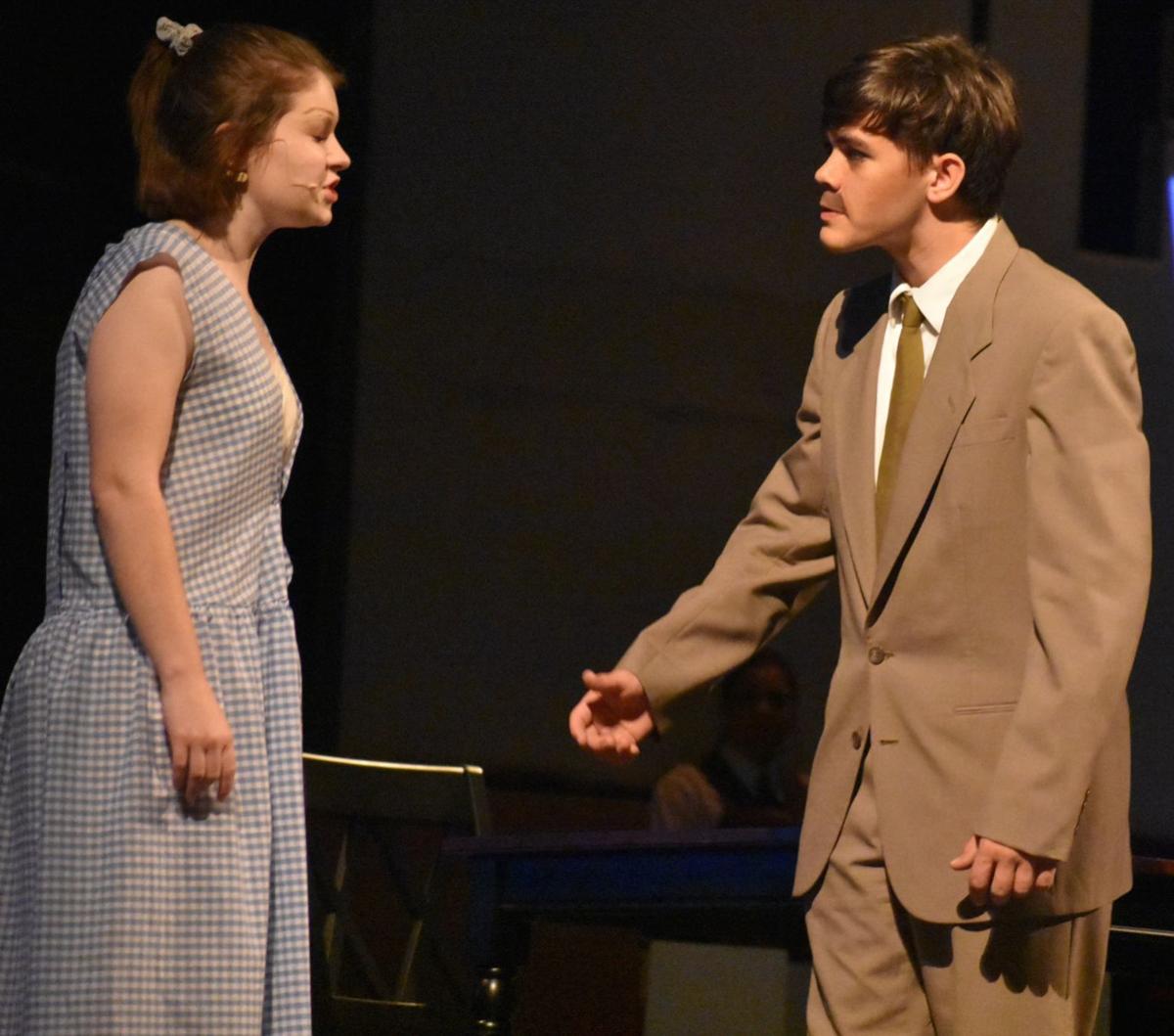 Lillie (played by Lauren Harriman), left, and Father (Kellan Koch) discuss a serious matter in a scene from Huntingtown High School’s “Act One”. 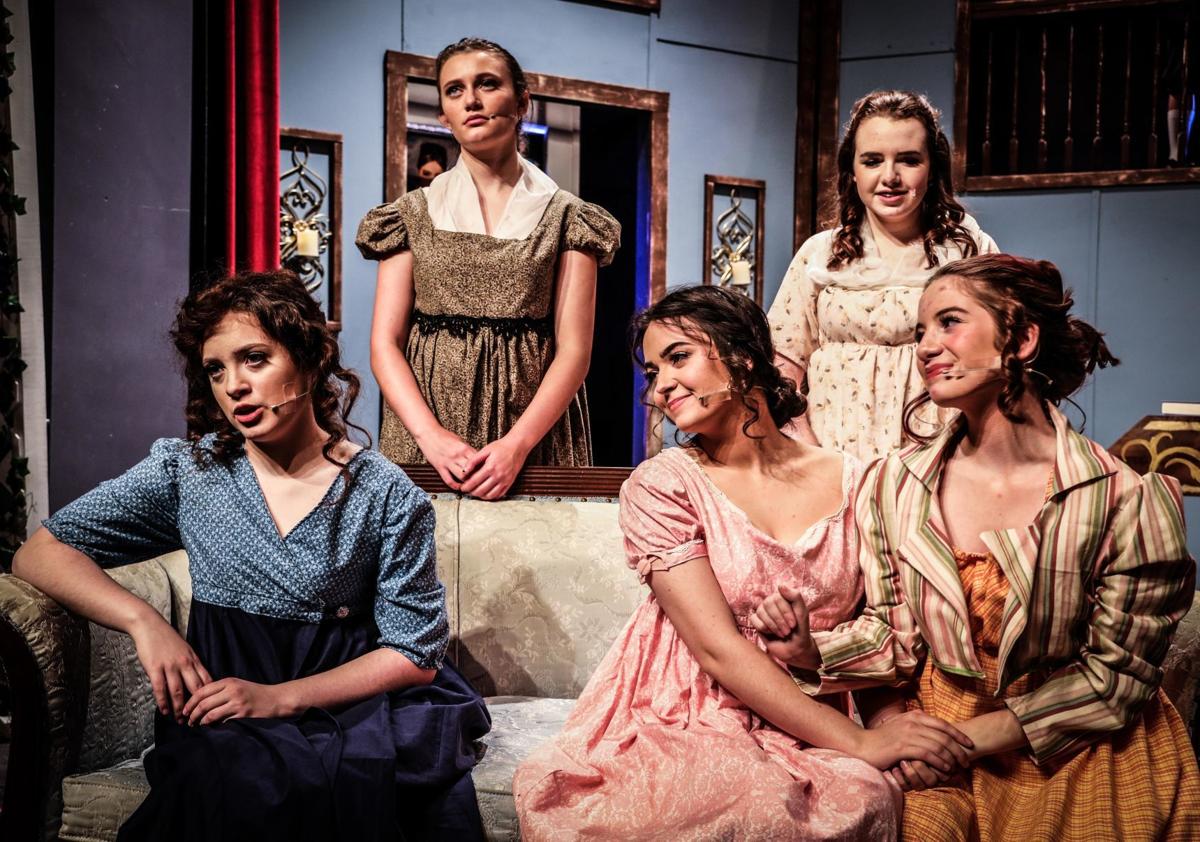 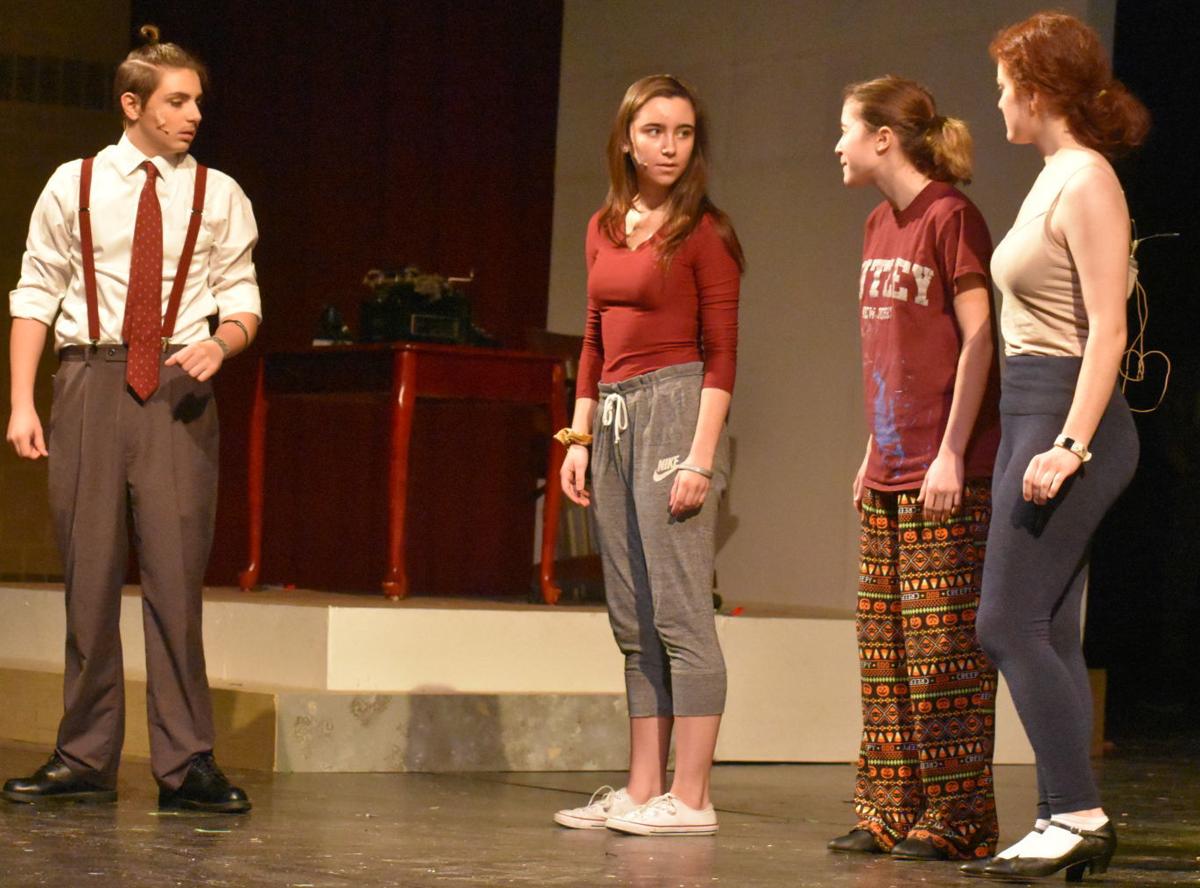 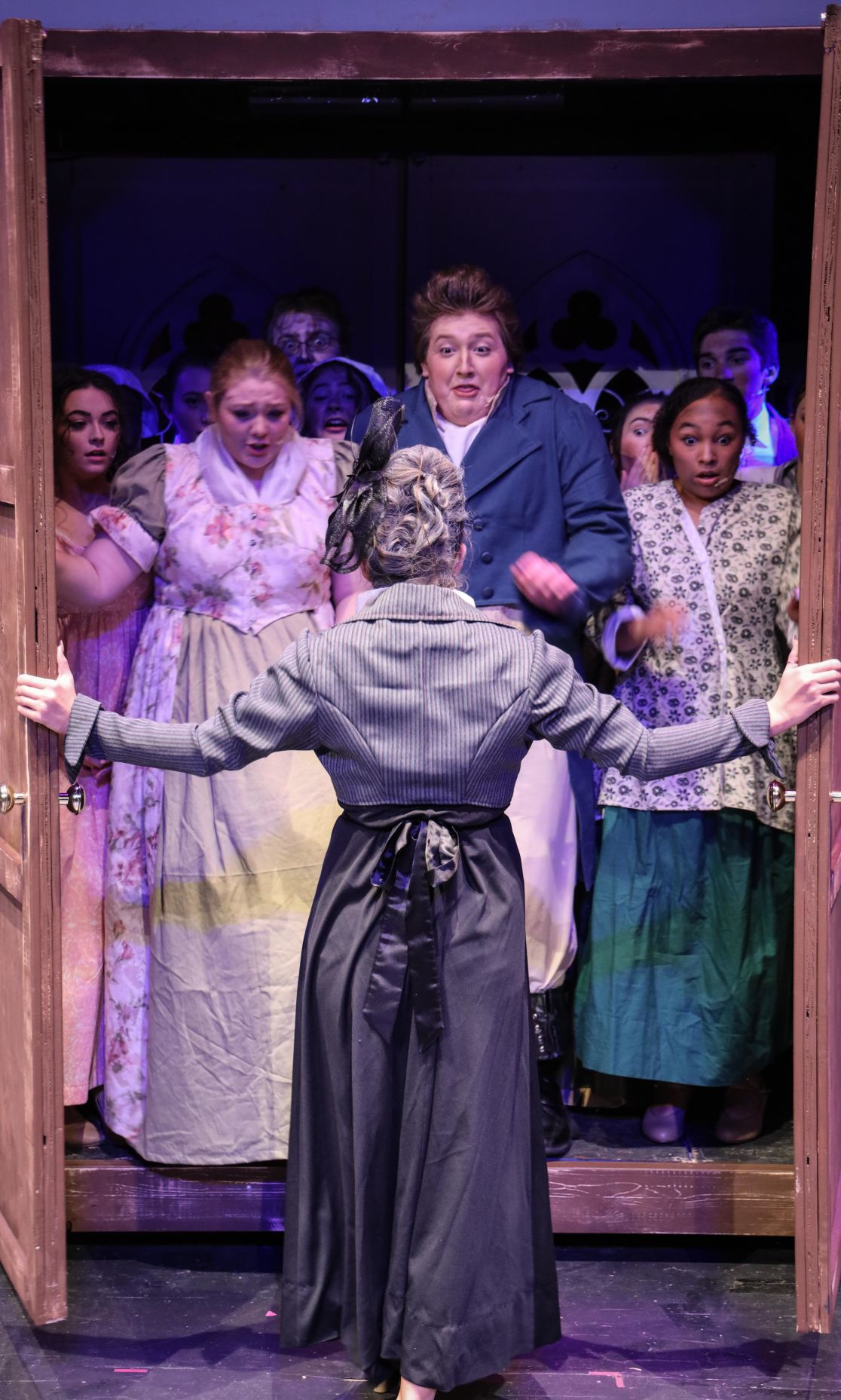 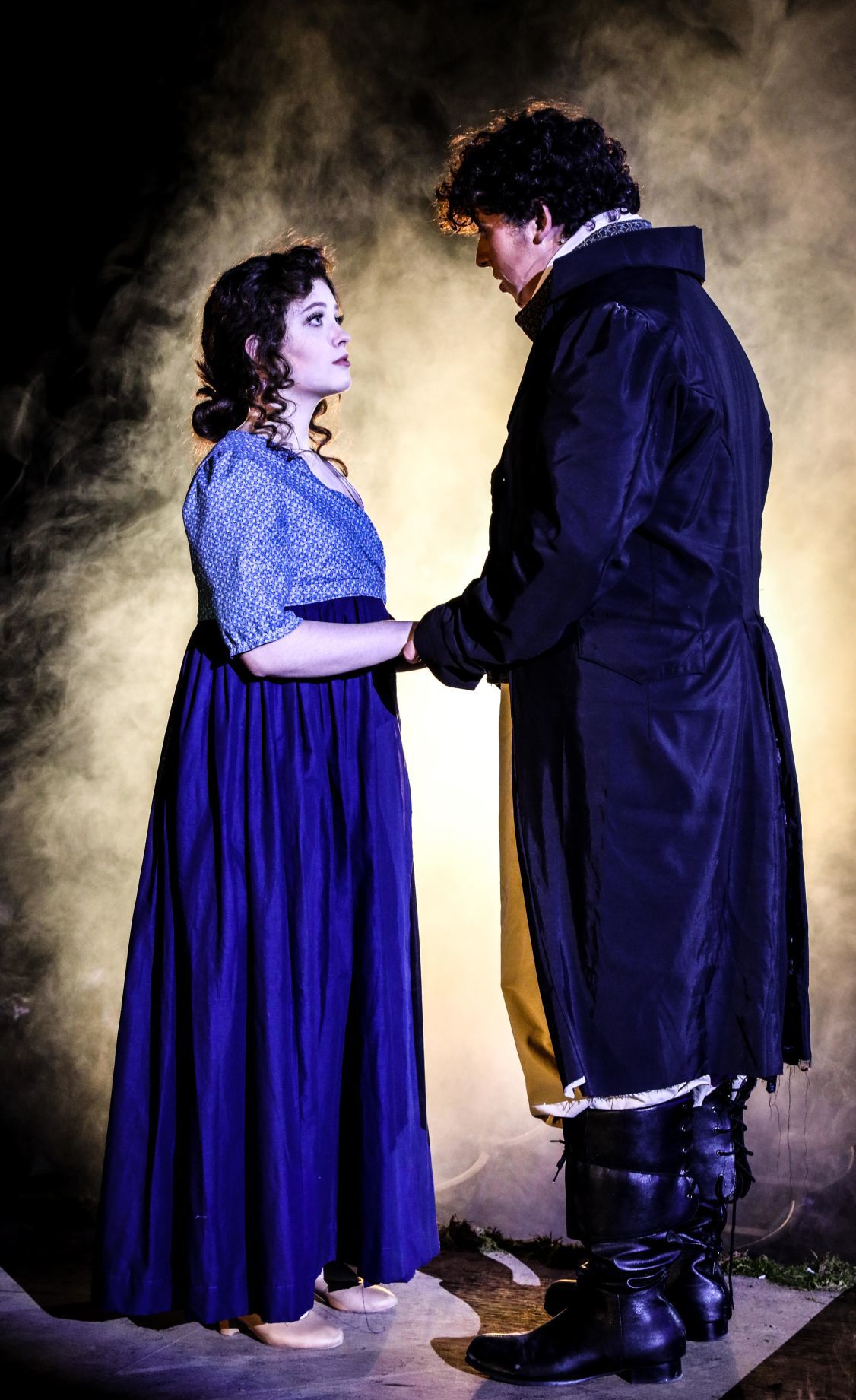 After being verbally assaulted by Lady Catherine, Lizzie (Maddie Rohde), left, meets Mr. Darcy (Seth Turner) to discuss their future in a scene from “Pride & Prejudice”. 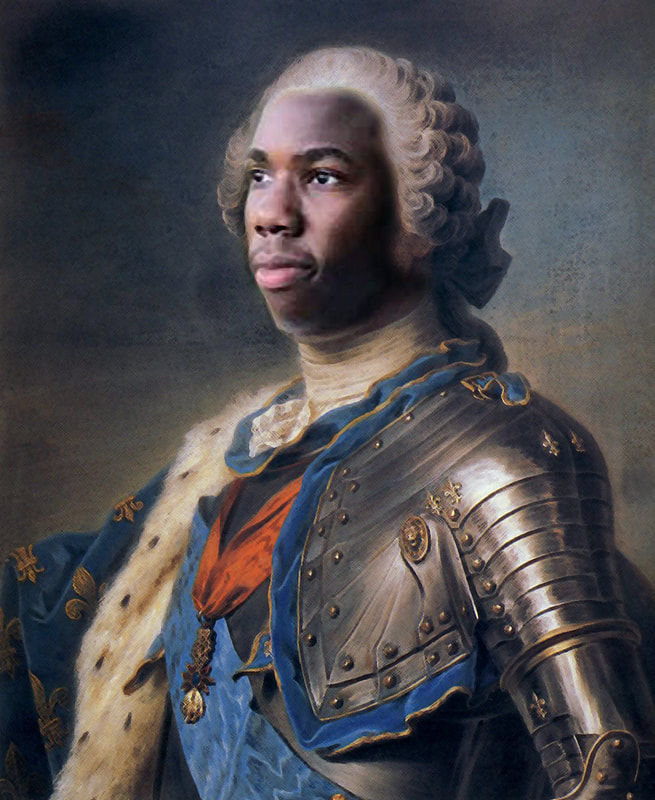 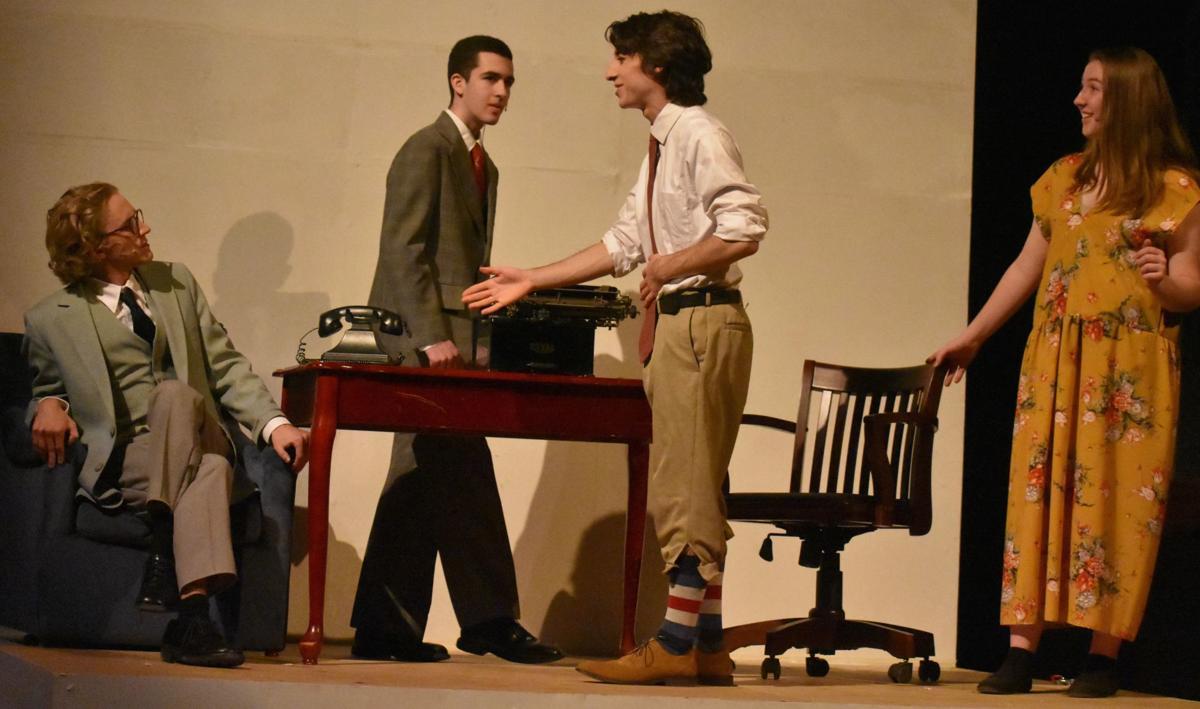 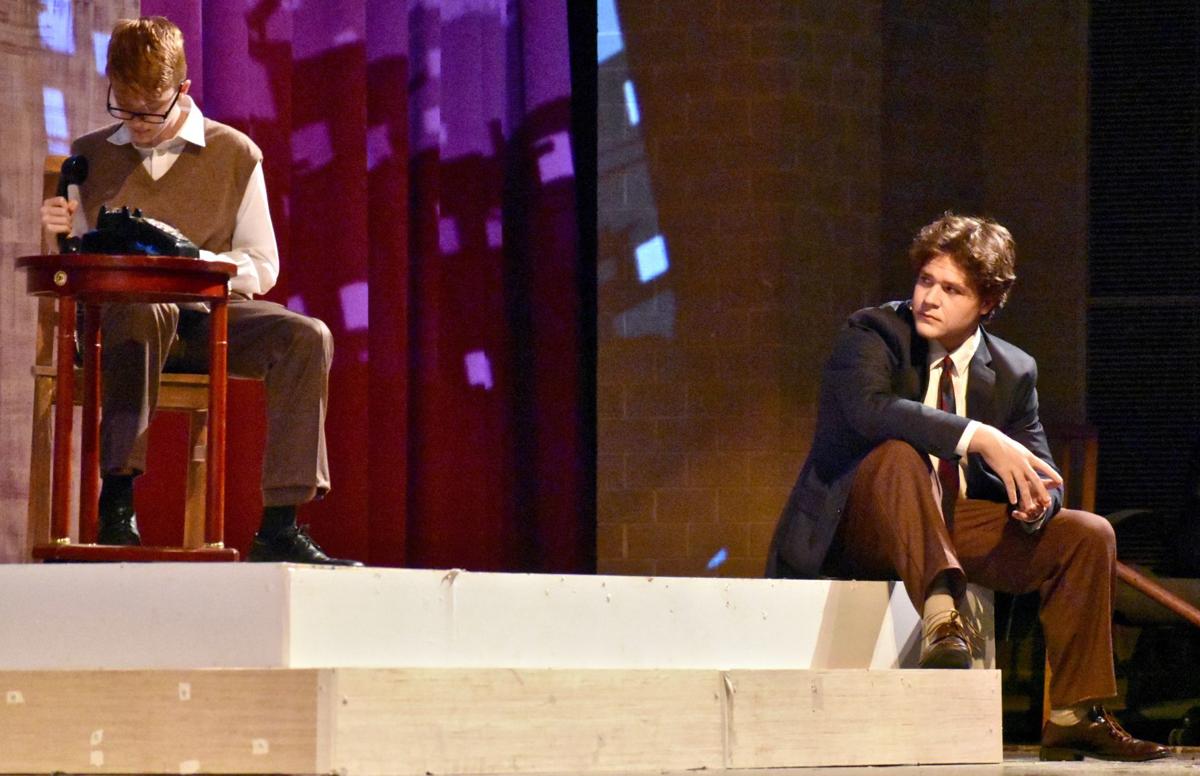 John Latecomer (played by Sean Foss), left, makes a telephone call under supervision from Hart (Isaac Reck) in a scene from Huntingtown High School’s “Act One”.

Lillie (played by Lauren Harriman), left, and Father (Kellan Koch) discuss a serious matter in a scene from Huntingtown High School’s “Act One”.

After being verbally assaulted by Lady Catherine, Lizzie (Maddie Rohde), left, meets Mr. Darcy (Seth Turner) to discuss their future in a scene from “Pride & Prejudice”.

John Latecomer (played by Sean Foss), left, makes a telephone call under supervision from Hart (Isaac Reck) in a scene from Huntingtown High School’s “Act One”.

Huntingtown and Patuxent High Schools are hoping to break a leg, though not literally, as each prepares to stage its fall productions.

Huntingtown’s Eye of the Storm Productions will stage related repertoires, “Once in a Lifetime” and “Act One,” while Patuxent’s Harlequin Productions will perform the classic “Pride & Prejudice.”

“Act One,” tells the story of Moss Hart’s struggles to get into show business and how he met George Kaufman. Together they penned “Once in a Lifetime,” which tells the story of three vaudeville performers trying to make it big when silent films gave way to the talkies.

“I was looking for a classic piece because we’ve done some updated modern pieces lately, and that one makes fun of Hollywood and theater and was a good fit for what we were doing,” Huntingtown High School teacher and director Derek Anderson said of the shows, which will be performed on a rotating schedule. “You can see them in any order you like because they stand on their own, but I think our audience would get more out of it if they saw both of them. It’s a wonderful bit of storytelling, and the way it’s written is drastically different than they were in the 1930s to nowadays. It was more presentational, and there’s a lot of language that have racial tensions in it and/or they fling around insults at certain levels.”

“The writing style is very different, and there’s a lot of jokes in it because it’s a comedy,” said Huntingtown senior Jenny Moore, who plays the role of May Daniels, one of the three vaudevillian characters. “And those may or may not land because the content is not what people today may or may not understand. It’ll be interesting to see how it goes.”

There are 35 actors in each show, and many perform in both plays.

Jerry Hyland (played by Aiden Ford) and George (Austin Jackson) are the other vaudeville characters.

“She’s kind of the brains of the operation; she’s a very smart woman and the one who comes up with the ideas,” said Moore, whose character has a love affair going with Jerry. “It was different than my normal roles because I’ve been cast as very ditzy characters. But this one is very complex, so it was tough getting the comedic timing down right.”

“George is kind of the comic relief. He’s the type of guy salesmen like to talk to because he’s very gullible and kind of air-headed. Still, he cares about what’s going on,” said Jackson, a senior who has performed in each school play and was the lead in the fall 2018 show “Curious Incident of the Dog and the Nighttime. “It’s an interesting role to play because he’s not a very complex character. He’s pretty straightforward, so it makes the line deliveries a little easier because I don’t have to put as much nuance into them, but on the other hand, it’s not something I’ve ever done before. It’s somewhat of a challenge to keep it somewhat real, but still, make it comedic and realistic at the same time.”

The two plays are about two hours each in length.

“The performers on stage are really good, they’re talented, and they’ve worked really hard,” Anderson said. “I think it’s some of the best that Calvert County has to offer in terms of high school acting.”

Patuxent tackles Jane Austen’s 1813 classic novel with a cast of 35, and an additional 15 crew members.

“I’ve taught English for 17 years, and this is one of my favorite things to teach because the characters are just so real, so well written, and the lines are just so sharp and so fun. Jane Austen was so ahead of her time,” said Patuxent’s Allen Price, who said the play has been on his directorial bucket list. “I was looking at my crew and thinking I could finally do it because I could see my Jane, and all the characters started forming because I had the right people.”

“It’s different than what we usually do, which is comedy fighting,” said student director Selia Bizzarro, a senior at Patuxent. “This is melodrama throughout the whole thing. This is tougher in how it translates to the audience, but we were on board with it all the way. The hardest part was getting the actors to portray the depth of each character fully.”

The play required the use of 90 costumes and several costume changes for several cast members.

“We have different types and patterns and ways to make dresses,” said Patuxent senior Catherine Marinaro, who is a co-costume designer along with senior Emma Ritch. “We went off the cast list and made sure we have everyone accounted for and had everything we needed for every scene change, for example, if they went somewhere and needed a jacket.”

“Jane’s supposed to be the kindest of all the sisters, but she’s very shy, so she comes across as really snotty to the rich people,” said Weir, who found it easy to play the part as she, herself, has five brothers. “Jane has a lot of restrictions [with her emotions], and she’s very guarded, so I can’t go very big on a lot of things.”

“It was a bit of a challenge playing a beloved character in classic English literature, but it’s a great opportunity to bring her to life,” said Rohde, who mastered the accent by watching period pieces with her mother. “She’s very smart and witty and says exactly what she feels all the time. She’s also headstrong, and I love that about her.”

Other roles include Seth Turner as Mr. Darcy and Jaylen Henderson as Mr. Wickham.

“He’s a very influential person,” Turner, a senior, said of his character. “He’s very shy, and I feel like I’m an outgoing and outspoken person a lot of the time, so just trying to calm myself down and just really try and focus on hiding what I’m feeling on the outside and taking it and almost putting it inside was very difficult. He comes off as a bad guy in public because he’s snarky and snobby, but behind everyone’s backs, he does things to help people.”

“He’s very mischievous, very charming, and he knows how to get what he wants by using his words,” said Henderson, also a senior. “The hardest thing for me to do was getting into that evil bad guy part of it, but the whole experience has been awesome.”

The almost two-hour production also brings audience participation into play with a walkway over the theater’s seats. Instead of just putting up random portraits, Price elected to photograph his actors in period clothing.

“It’s just a great piece about love when it comes down to it, and also it’s about how our perception of things can make us think the wrong thing and taking a step back and admitting you’re wrong,” Price said. “Everyone who comes will be entertained and will laugh a lot.”

“I think what makes our play special is the amount of dedication that every single person puts into it, from tech to acting to costumes,” said house manager Faith Howe, a senior, who is also in charge of lighting. We’ve given our hearts to the show.”

The Nov. 15 performance may be cancelled by a playoff football game.

For more information, go to http://patuxentharlequins.weebly.com/.