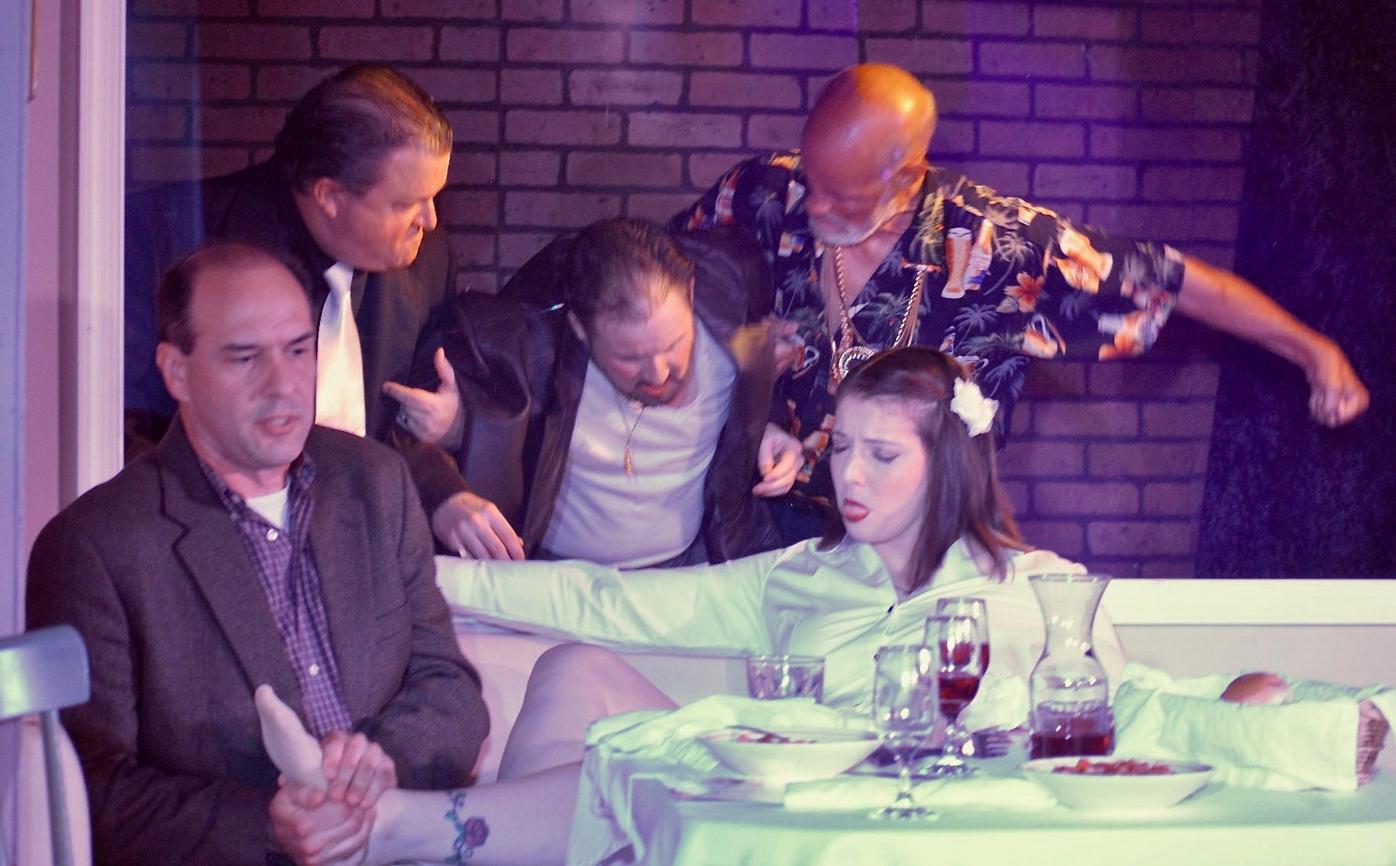 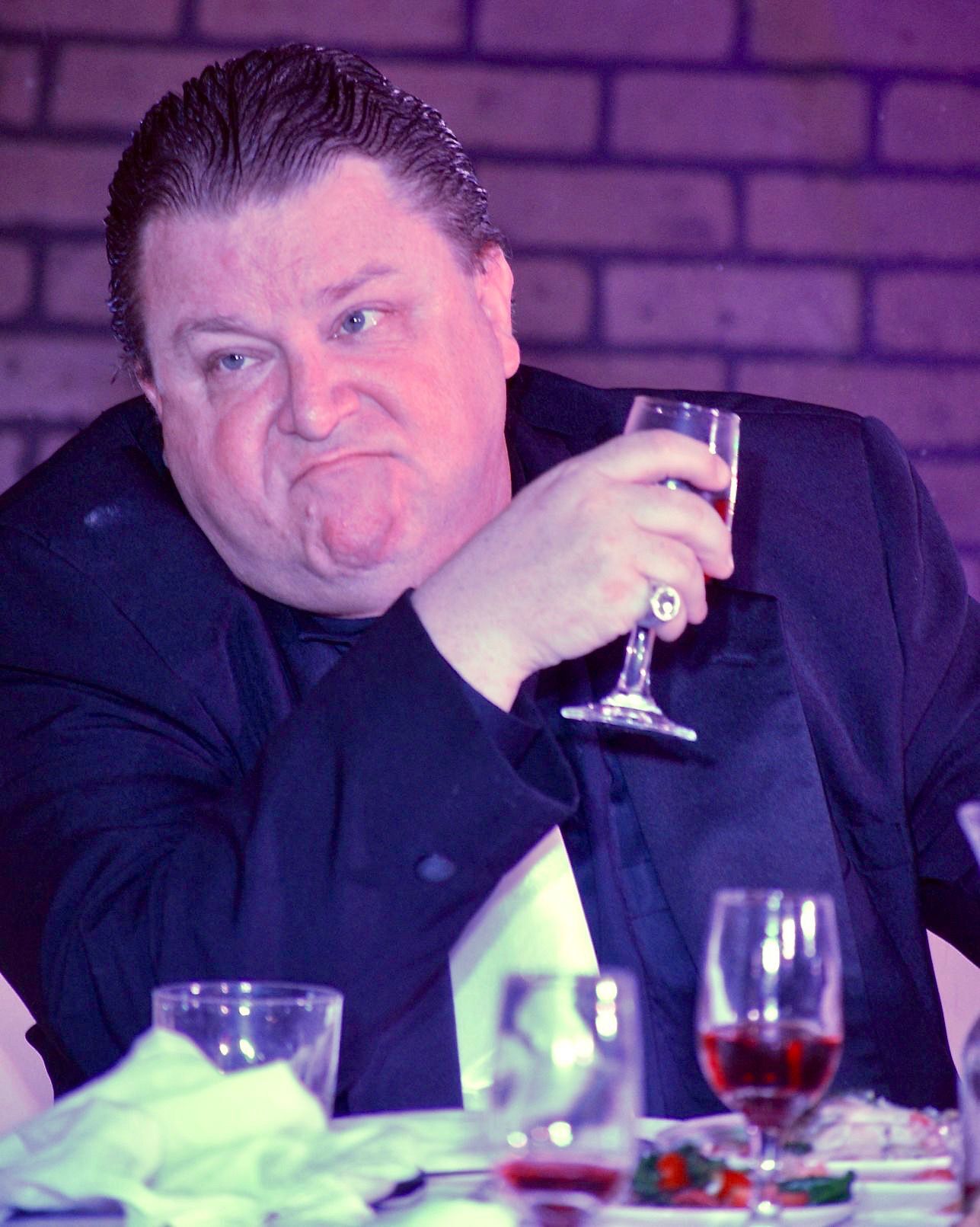 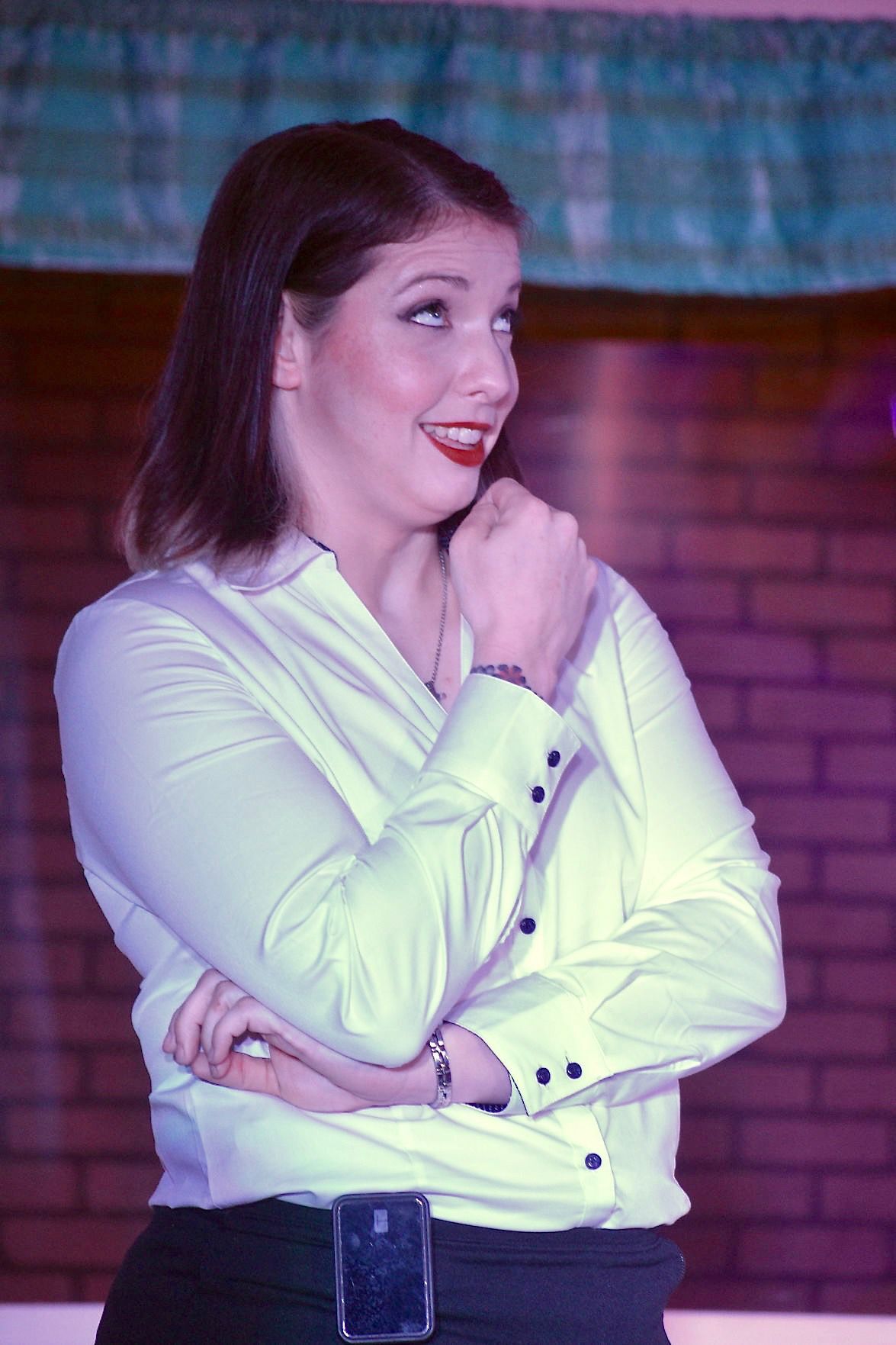 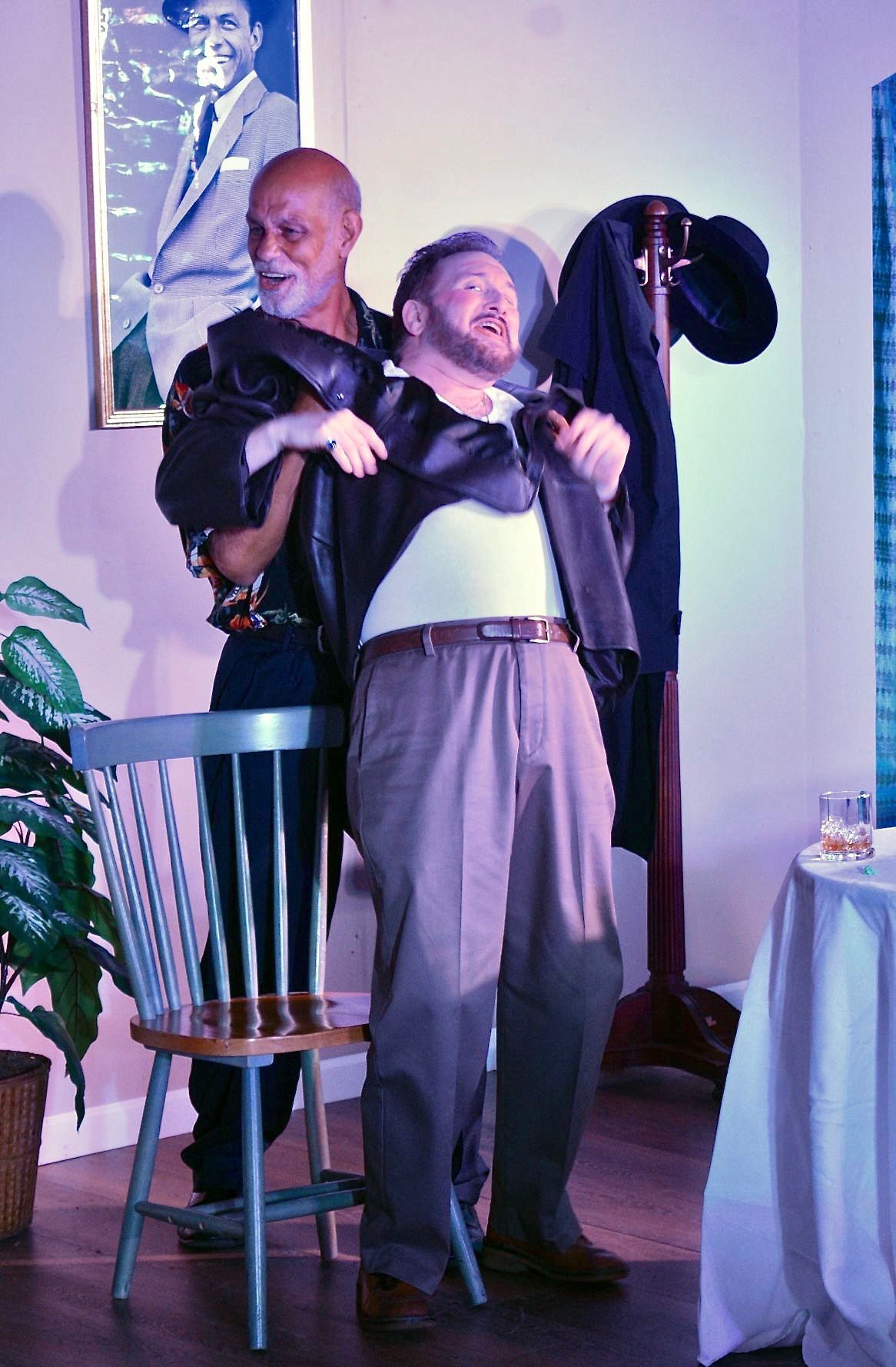 Mike Francisco (played by David M. Thomas) literally shakes things up after learning Frankie Salvucci (Robert Sebo) is unable to pay his debt to the famiglia. 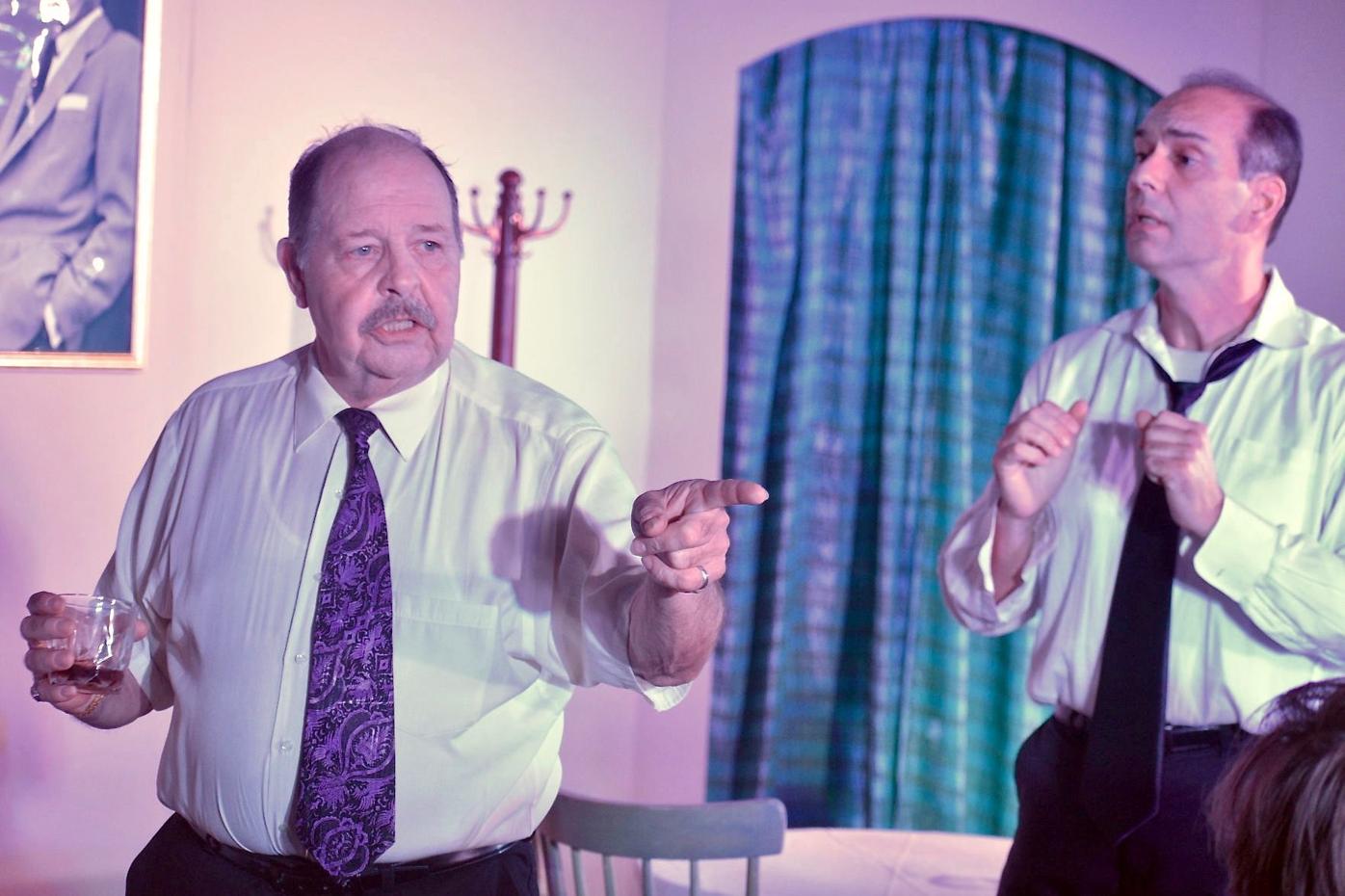 Mike Francisco (played by David M. Thomas) literally shakes things up after learning Frankie Salvucci (Robert Sebo) is unable to pay his debt to the famiglia.

What do you get when you cross an Italian father wanting to marry off his ready-to-wed daughter, an insecure playwright looking for funding, and the demands of the Mafia when it provides the funding?

The play is in its final week of a two-week run.

“It has its own reality, it’s funny and there’s no message or deep meaning to any of it,” said Director Rick Thompson, who held rehearsals at his home.

“Breaking Legs” tells the story of college professor Terence O’Keefe (played by Justin McCright), a somewhat successful playwright who is seeking funding to produce his new play. He visits the family of a former student and finds they are quite interested in the idea, but complications arise when the family turns out to be minor Mafia godfathers who will back the play provided they never have to read it — which doesn’t mean they won’t want to make some changes.

“It was a very different scenario because of the pandemic. We couldn’t really do anything in person until about a month and a half before,” said McCright, who lives in Lusby. “It was definitely a unique challenge.”

Making Terry’s life more complicated is the fact that former student Angela Graziano (played by Monica Jones) is the lusty, unmarried daughter of the house who makes no secret of her attraction to him.

“I did not realize the full extent of Angie until after I read the script the first time and actually started rehearsals,” said Jones, who lives in Lusby and is a paramedic with the Calvert County Department of Public Safety. “I was like, ‘OK, she’s fun’ and then it was like, ‘Oh gosh, she has an attitude and she’s … I don’t think flirtatious is quite the word. I had no idea.’ Every rehearsal [Rick] would tell me, ‘Play it up more’ and eventually I got it.”

Jones had roles while she was attending North Caroline High School, but returned to the stage in October 2020 after a 15-year absence.

“I needed something to do with my life,” said Jones, who was a stay-at-home mother for several years. She auditioned for a role in a recent play, but was instead offered the role of stage manager, which she jumped at because it got her “out of the house. I enjoyed it a lot.”

“This is the best role I ever had in any play,” said longtime theater veteran Sid Curl of Prince Frederick, who plays the role of Lou Graziano. “Lou is great. He’s got such great comedy timing and the way he handles everything and manipulates everybody as he’s trying to get his daughter married. He’s manipulating the whole thing. I’m loving this play. It’s so much fun, it’s so much fun.”

“You give him an audience and he’s a happy man,” Thompson said of Curl.

Frankie Salvucci (played by Robert Sebo in his NDCT premiere) makes a brief — but lasting — appearance when he stumbles and shakes his way through a meeting in which she’s slated to pay back some money.

“I told him, ‘You’re going to have to be a really squirrelly guy,’” Thompson said of Sebo.

He later meets an unfortunate end at the hands of the “famiglia,” though it’s simply explained as a freak accident with the 9:02 to Boston.

O’Keefe is relieved when he’s given the go-ahead with the funding, but stunned at the laundry list of changes to his script.