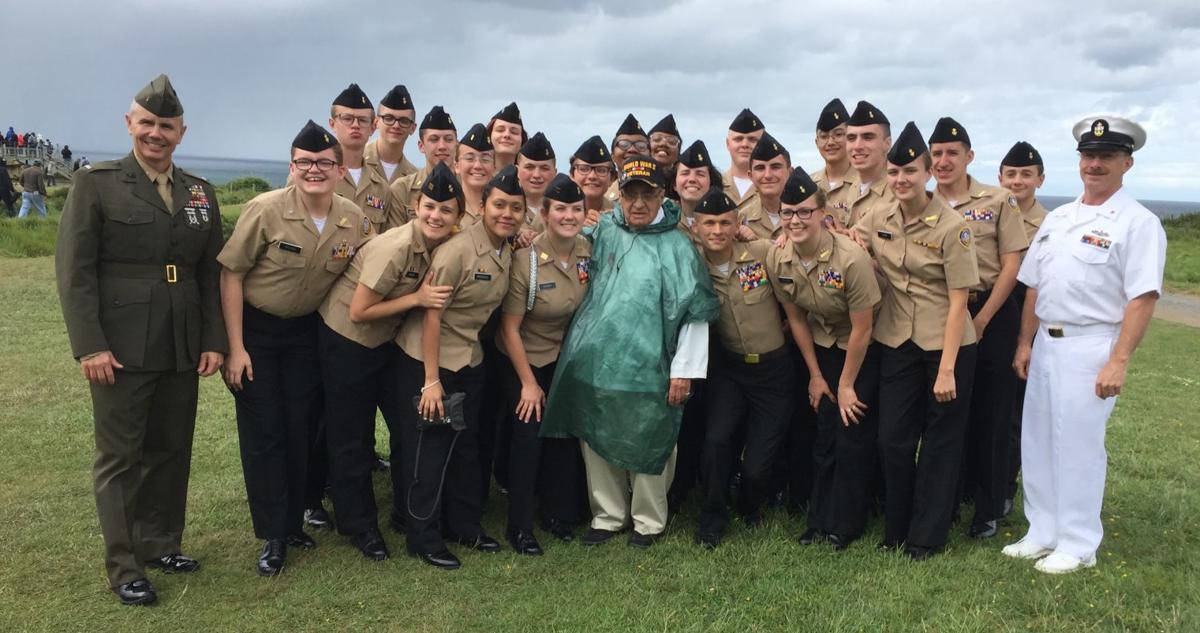 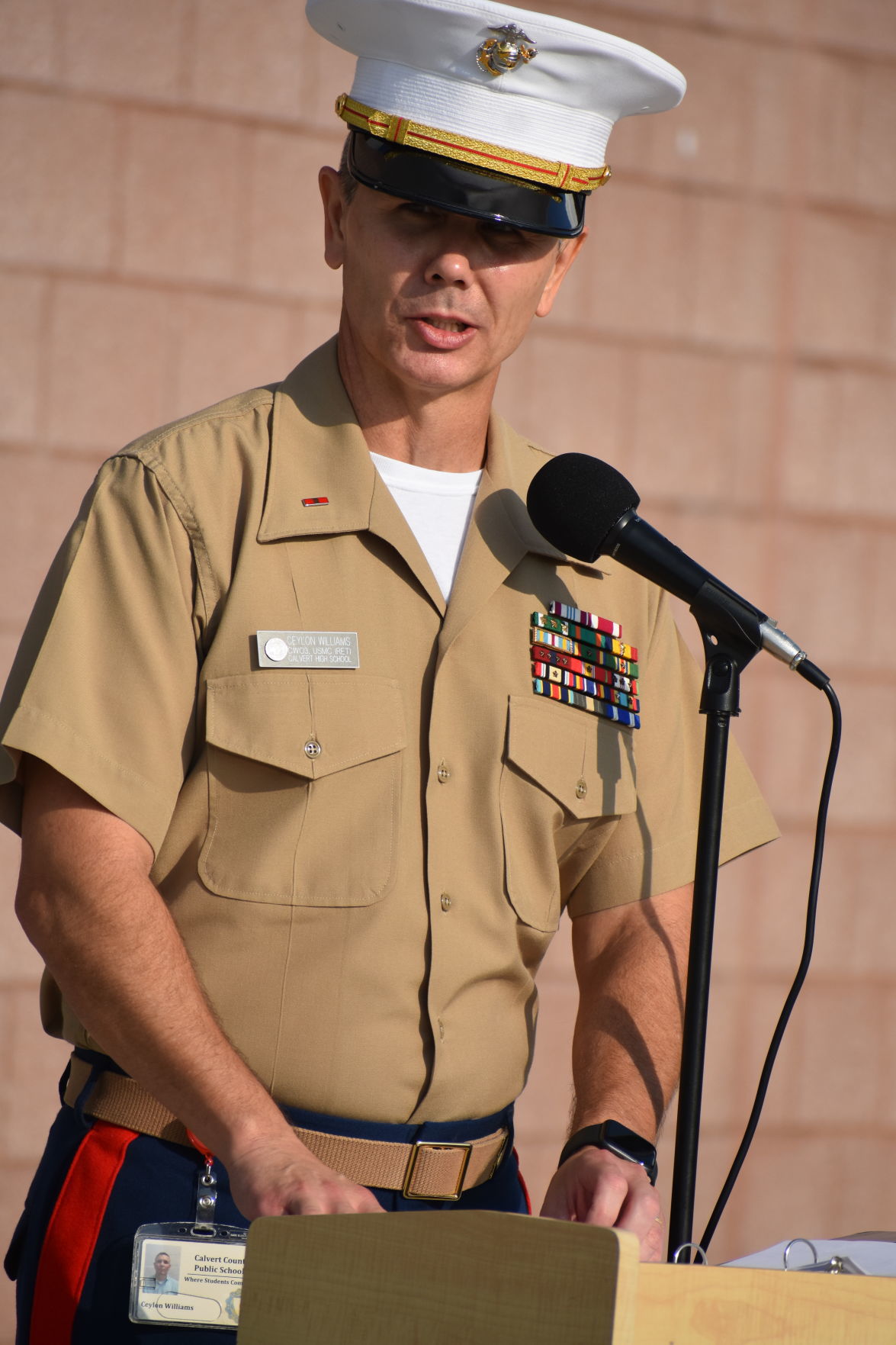 Chief Warrant Officer 3 Ceylon Williams, who is the senior naval science instructor for the Calvert High School NJROTC, speaks during a tribute for the victims of the Sept. 11 terrorist attacks. 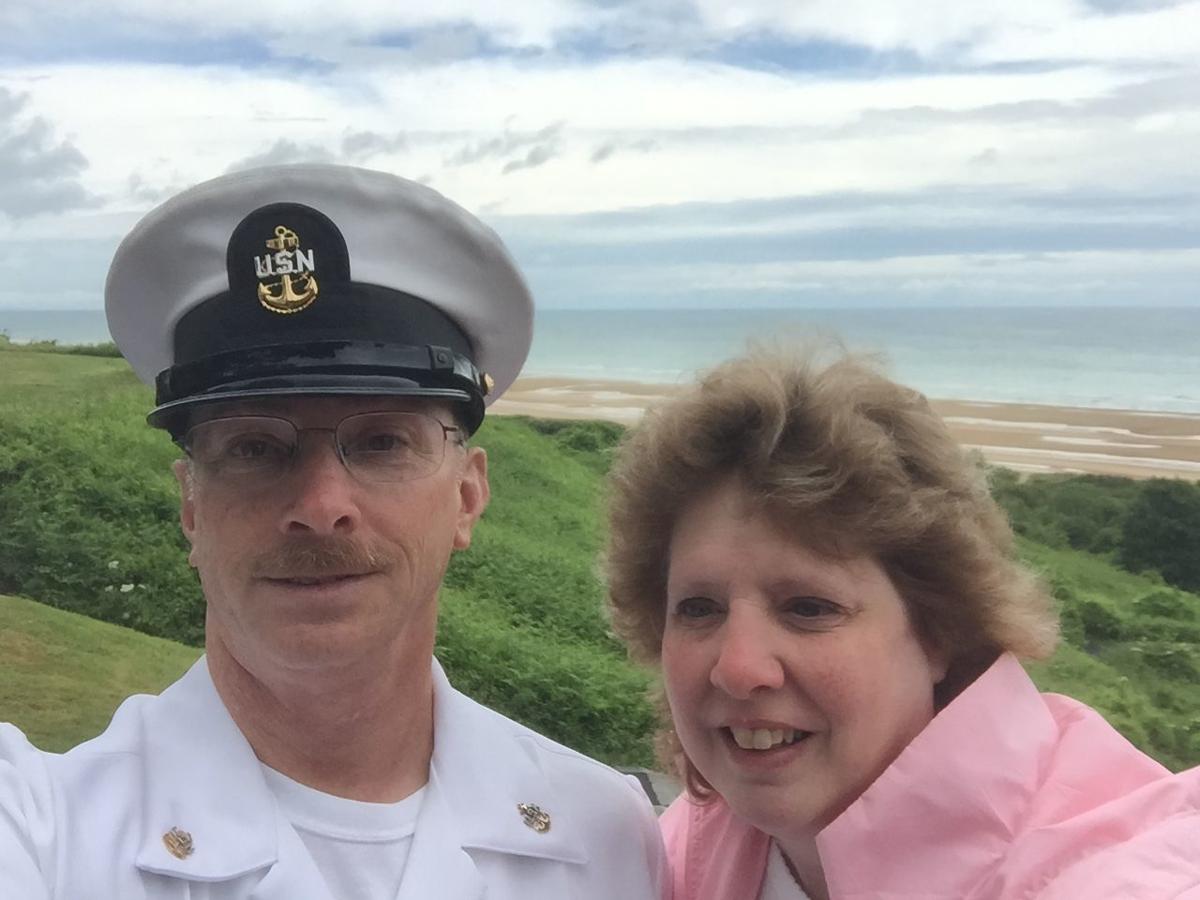 STGC(SW) Kevin Peck, who is a naval science instructor for the Calvert High School NJROTC, poses for a photo with wife Gail during a school trip to Normandy, France in June 2019. 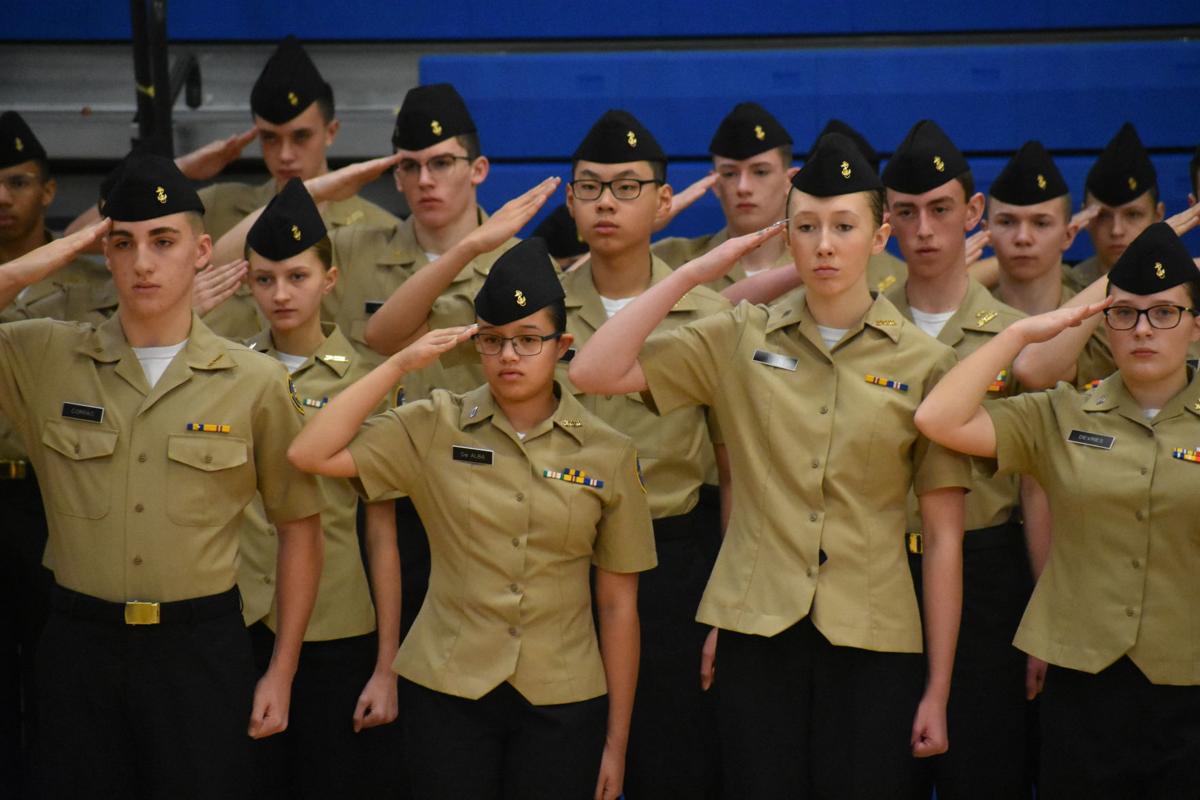 Chief Warrant Officer 3 Ceylon Williams, who is the senior naval science instructor for the Calvert High School NJROTC, speaks during a tribute for the victims of the Sept. 11 terrorist attacks.

STGC(SW) Kevin Peck, who is a naval science instructor for the Calvert High School NJROTC, poses for a photo with wife Gail during a school trip to Normandy, France in June 2019.

All the hard work by Calvert High School’s Naval Junior Reserve Officer Training Corps paid off when the unit was recently named the 2020 Most Outstanding Unit in the Mid-Atlantic’s Area Five.

To earn the title, the unit had the best results based on the end of year report, which was calculated on a points-based system analyzing performance in academics/professional development, community service/citizenship and unit participation.

“We’re ecstatic about it and very proud of the cadets and their performance,” said Chief Warrant Officer 3 Ceylon Williams (USMC-Ret), who has been the school’s senior naval science instructor since 2016. “They continue to rise above previous years’ [classes] and have been celebrated all the way to the top. It’s a job well done.”

The Calvert High NJROTC program, which began in 1985, had 121 students this year. The program will lose 22 seniors to graduation.

“We’re delighted,” said Sonar Tech Chief (Surface Warfare Qualified) Kevin Peck (USN-Ret), who is in his 16th year as naval science instructor, the last two at Calvert High. “Am I happy for the kid’s sake? Yes. They got recognition for working hard, which they did. That’s the only thing I take joy in is the fact the kids really came together and worked hard together this year. And this shows they did a better job than everybody else.”

The award of Most Outstanding Unit is awarded annually in each area. The Mid-Atlantic Region Area Five consists of 57 schools in Maryland, Virginia, and the Washington, D.C. area. According to Peck, this is the sixth time Calvert High has earned the title.

Calvert High will now compete with other winning area units for the national title.

“We are so proud of the cadets and the many things they do to support our school and our community,” Calvert Principal Steven Lucas said. “Whether they are putting up the flag out front every morning or helping veterans at Christmas, they are always looking sharp and doing their best to show Cavalier pride.”

Under the direction of Williams, and Peck, the group’s motto — “Unit Before Self” — has fostered its success by amassing more than 4,500 hours of community service this year.

“Indeed, they deserve this honor,” Superintendent of Schools Daniel D. Curry said in a news release. “Not only have the cadets contributed much to this community, but, under the leadership of Chief Warrant Officer Williams and Chief Peck, they have had some exceptional opportunities to represent Calvert County around the world.”

The program has also provided a plethora of opportunities for students, which includes college visits, Science Technology Engineering and Mathematics and flight simulator tours at Naval Air Station Patuxent River, tours and cruises on naval vessels at both the U.S. Naval Academy and Norfolk Naval Base in Virginia, and U.S. Military Academy tours.

“Really, it’s their level of motivation compared to previous years,” said Williams, who is in his fourth year at Calvert High. “The upperclassmen had a lot of influence, and that’s what the program is all about really. It’s about building leaders and instilling good character, patriotism and a sense of development. And you can’t build too much all at once or too rapidly because it does take a little time.”

A news release stated that the program “fosters the development of citizenship and leadership skills and teaches cultural awareness, college and career preparation, physical fitness, time management, and many other skills that enhance success in school and beyond.”

“I would say our success is a combination of a number of things,” Peck said. “It’s the bond and the camaraderie the cadets have built among themselves. I think it also has to do with warrant officer [Williams] and myself as we have a really good relationship, and we work together as a team. The kids see that, and I think it draws to work harder as well.”

The release added that “as a distinguished unit with honors, the instructors have nominations to be awarded to those seeking an appointment to the United States Military Academy, Naval Academy or Air Force Academy.”

Additionally, cadets have opportunities for ROTC scholarships at universities throughout the country. This year’s senior class has been awarded numerous scholarships, including a $135,000 Penn State Army ROTC, a $180,000 UMBC Navy Scholarship, and $135,000 as a Towson Army Scholarship.