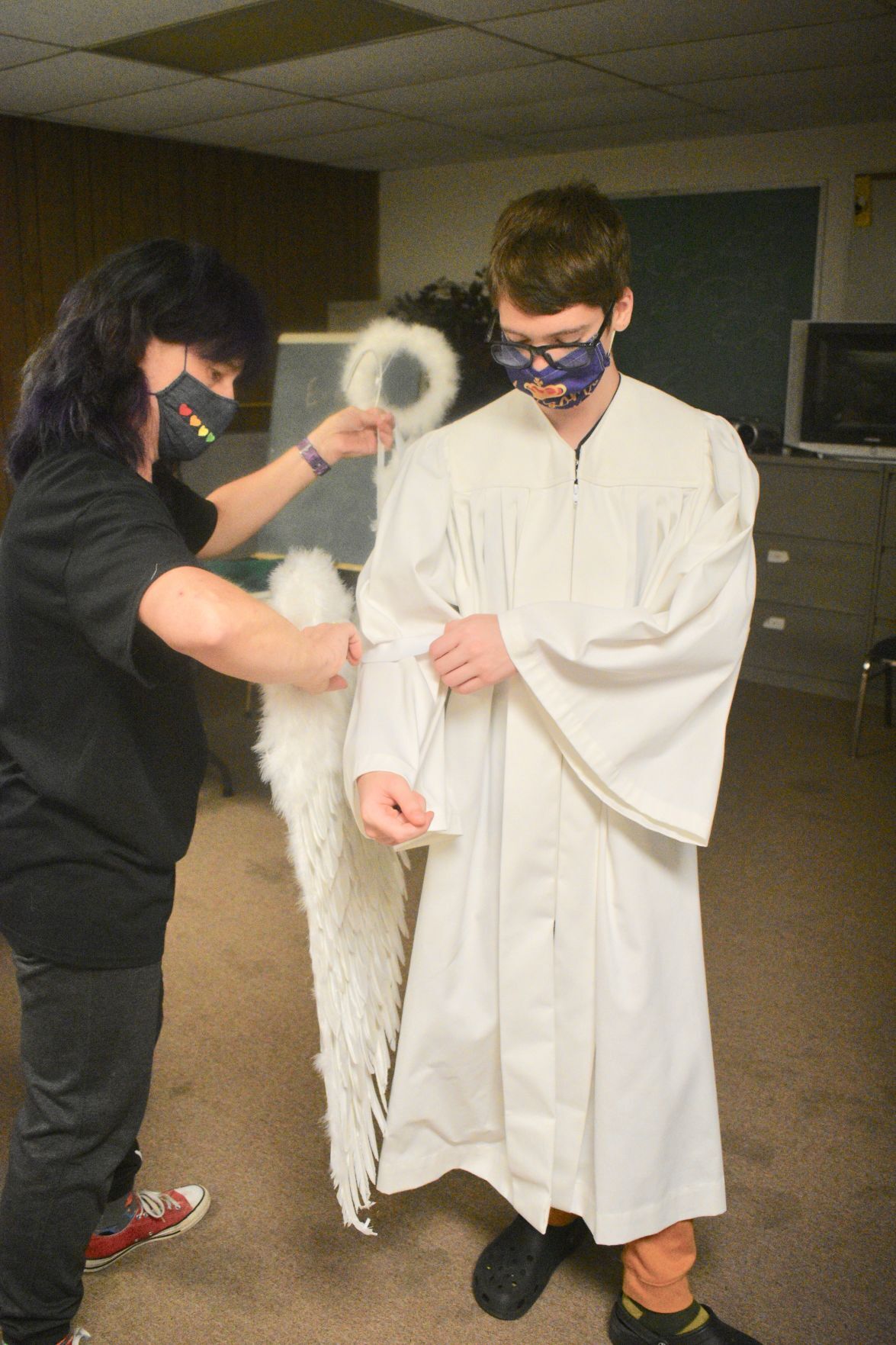 Logan Patton, right, is fitted with his angel wings by “A Night Between Heaven and Hell” director Laurie Foster. The Hollywood resident plays the angel Michael in “Act of God.” 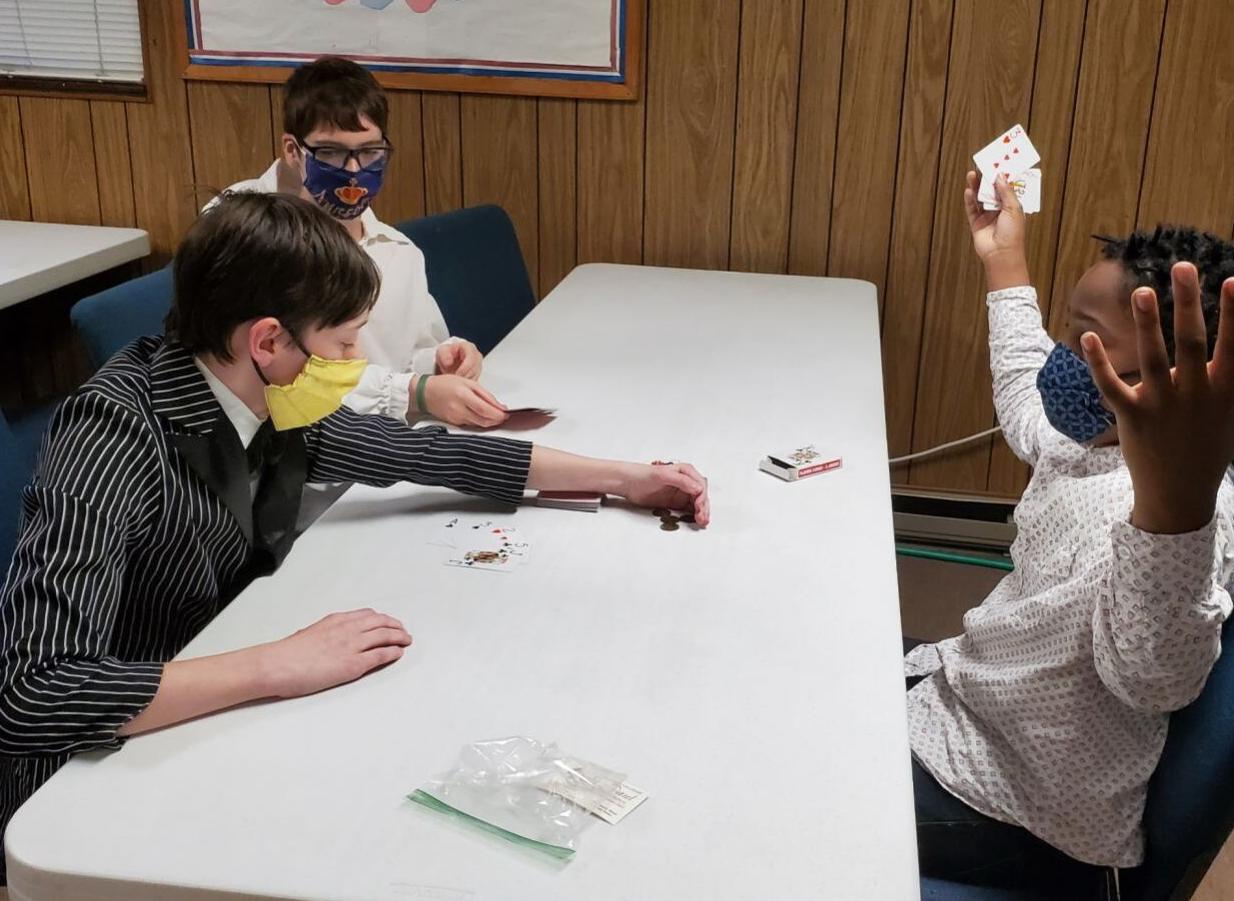 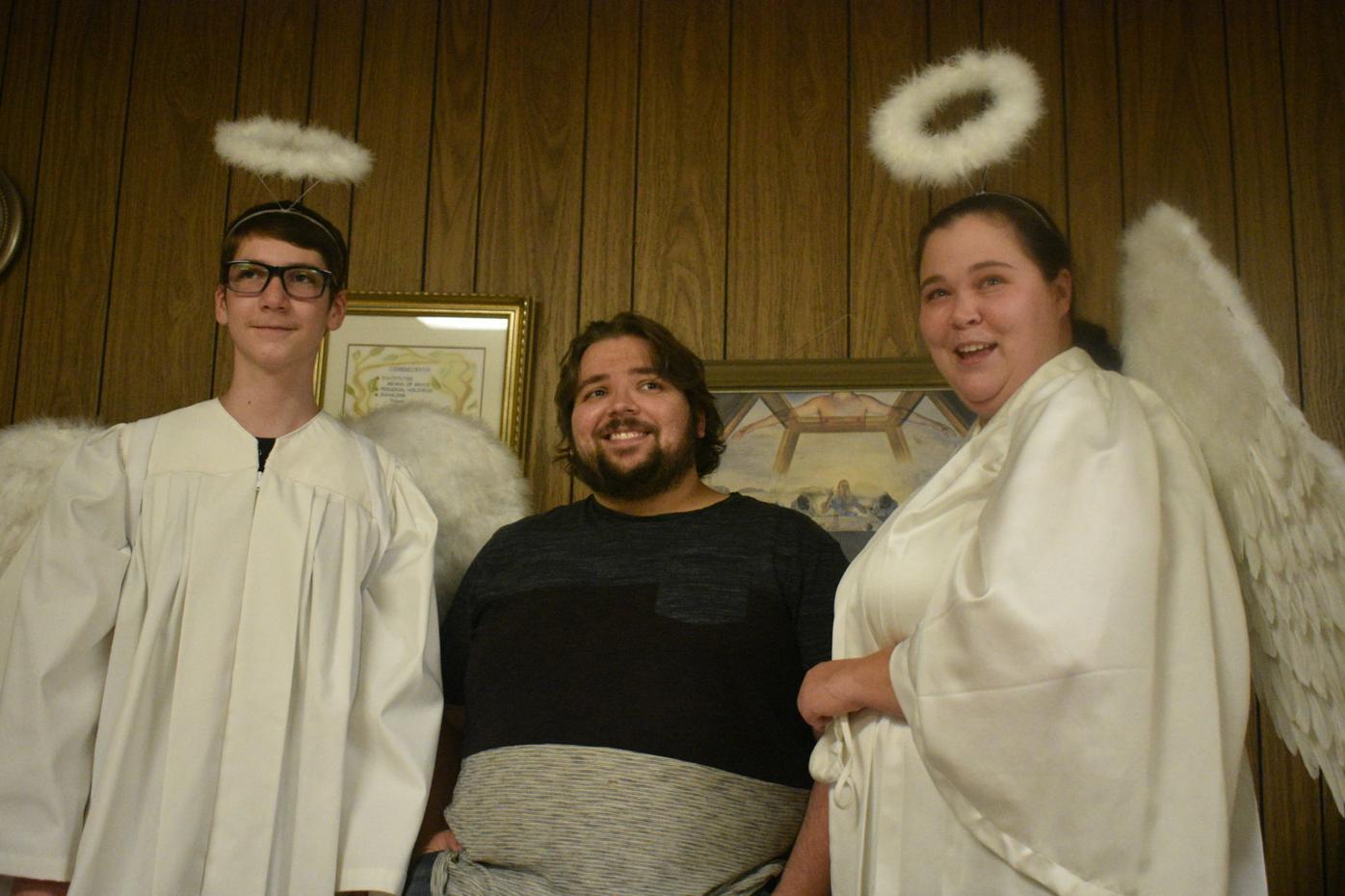 Logan Patton, left, portrays Michael the angel while Alex LaClair is God and Lisa Zimmerman is the angel Gabriel in “An Act of God,” the third act in the “A Night Between Heaven and Hell” play.

Actress Jonie McCright portrays Lucifer in “Welcome to hell,” the first act of “A Night Between Heaven and Hell.” 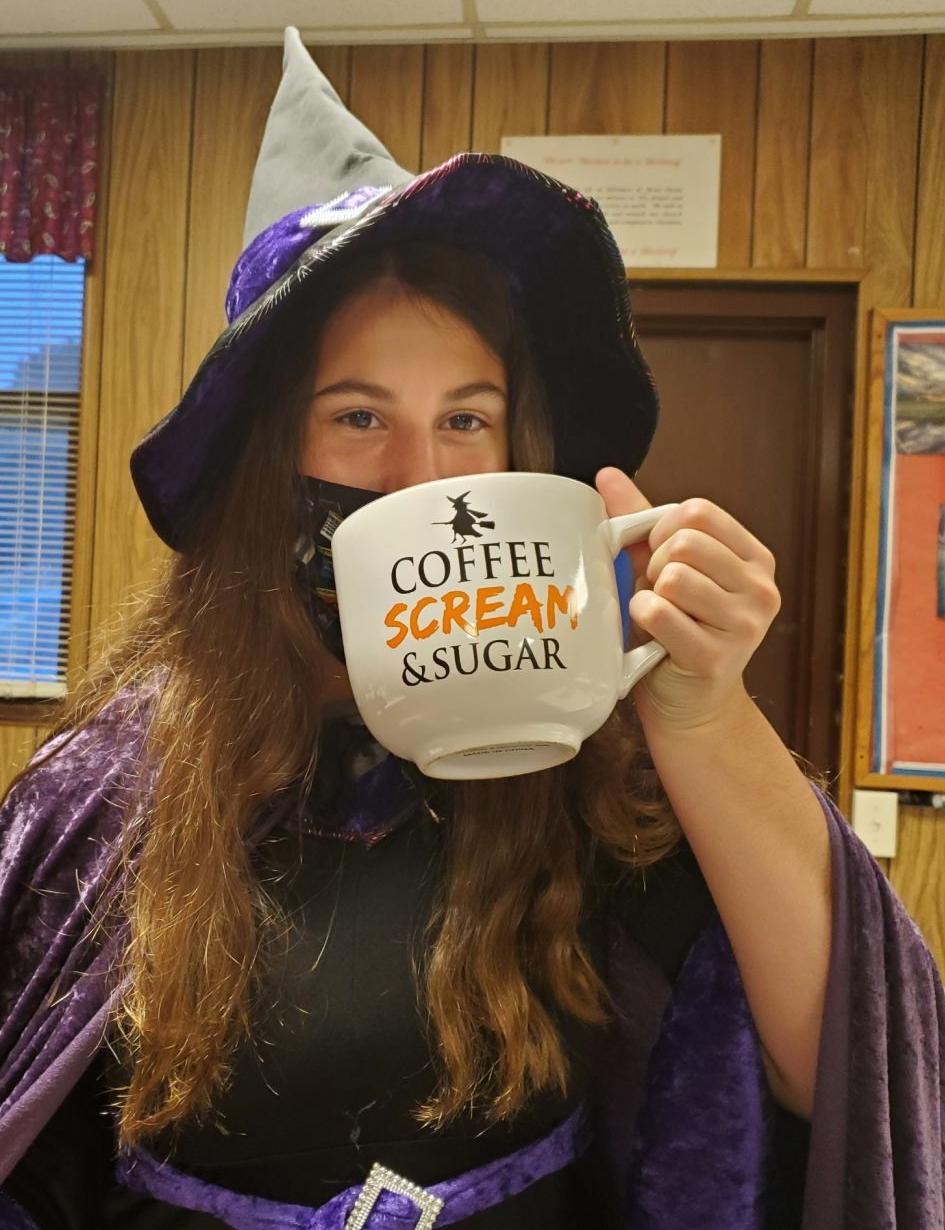 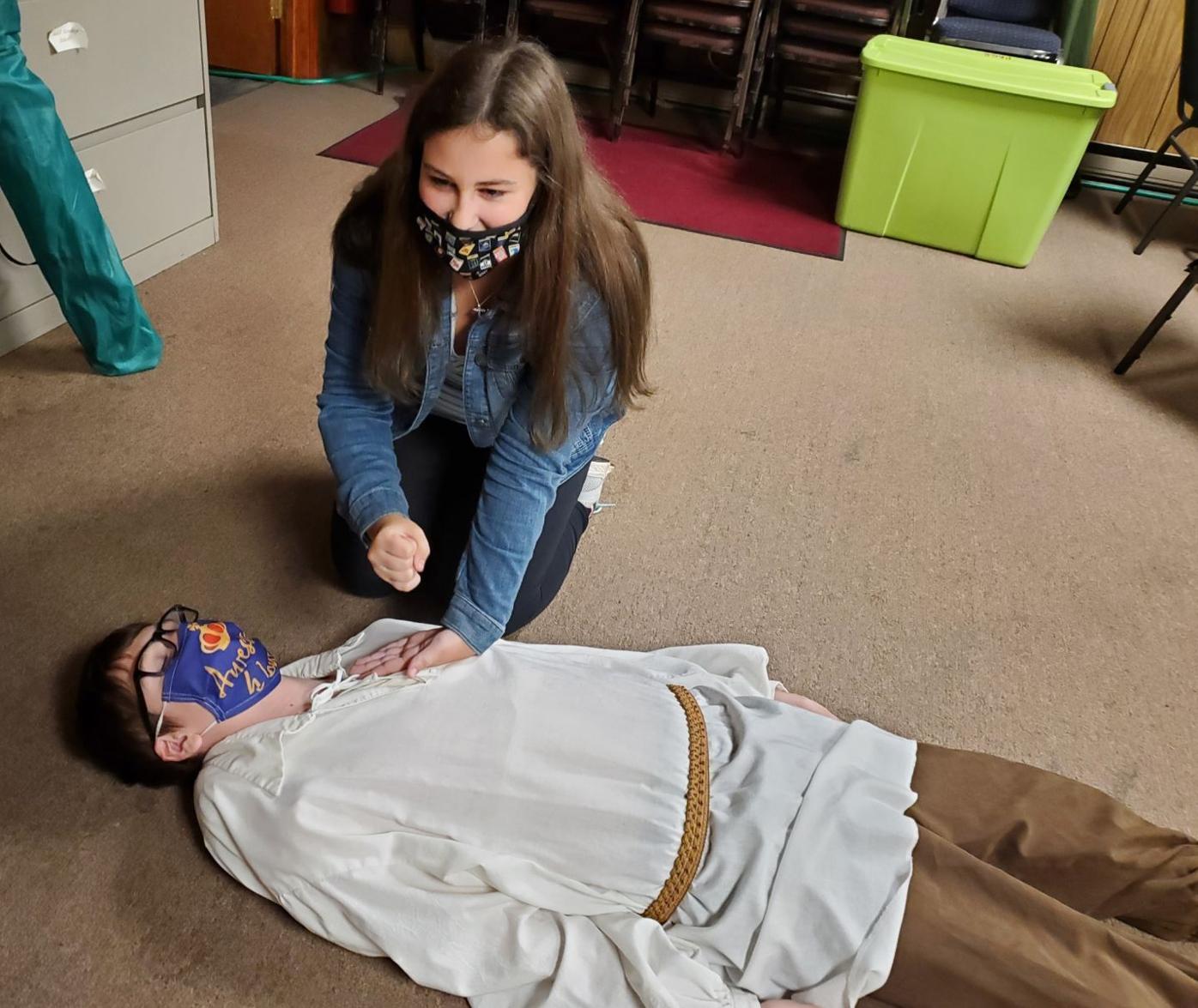 Logan Patton, right, is fitted with his angel wings by “A Night Between Heaven and Hell” director Laurie Foster. The Hollywood resident plays the angel Michael in “Act of God.”

Logan Patton, left, portrays Michael the angel while Alex LaClair is God and Lisa Zimmerman is the angel Gabriel in “An Act of God,” the third act in the “A Night Between Heaven and Hell” play.

Actress Jonie McCright portrays Lucifer in “Welcome to hell,” the first act of “A Night Between Heaven and Hell.”

The New Direction Community Theater will explore both good and evil when it hosts two plays beginning Friday and running through Sunday, Oct. 25.

The theater is staging the dual plays to celebrate its 10th anniversary.

“Villain School,” which has two casts, is where evil characters go to the Villains’ Institute for Learning Evil, otherwise known as VILE, to learn their wicked ways. Like any school, VILE has its own social groups: the monsters; the witches; the convicts and the misfits, who just don’t fit in along with the evil geniuses, who rule the school.

“[Teachers today are] so good in school at teaching kids with positive behavior intervention system with incentives and this school is the opposite of that,” said director Sherry Mervine. “They applaud people who don’t do the right thing and they don’t want people to be good. They want to encourage people to be evil and be more in competition and not be friends. Some of the lines are a little surprising in that they want you to have a science fair project that doesn’t benefit society. They want it to be evil and nasty and if it’s not it’s disqualified.”

The cast of “Villain School” is comprised primarily of young actors.

I just saw it as a thing I wanted to do,” said Jaylenn McCall, an eighth-grader at Bejamin Stoddert Middle School, on his fist foray into acting. “It’s a passion for me to see myself in other people’s shoes and go on adventures and testing out new things,” he said. “It’s been amazing just how you can create so many friends out of one activity and how exciting one thing can be and lead to other exciting things.”

McCall portrays Frank N. Stein in the first cast of “Villain School” and a werewolf in the second cast.

“If you are thinking of [a werewolf] as a shy little animal that wants to be involved in things,” McCall said, “that’s not being a good werewolf because if you know a werewolf they’re strong attacking leaders.”

Lukas Righter, who is also in the eighth-grade at Bejamin Stoddert Middle School and has Mervine as a teacher, portrays Frank N. Stein and a hustler named Sharky.

Stage veteran Logan Patton of Hollywood, who has appeared in 18 plays, including seven with New Direction, tackles the role of Quasimodo this time out.

“When I saw the role of Quasi it seemed like a perfect role because he’s got a lot pf spunk and he’s happy-go-lucky,” said Patton, who wears a pregnancy bowl to mimic the hump on his back. “I have to walk with a little bit of a limp so there’s kind of a dragging of the leg and a shifting of the knee while walking.”

Geared more toward adults, “A Nightmare Between Heaven and Hell” is three acts — “Welcome to Hell,” “The Middle Ground” and “An Act of God” — and is comedic take what happens both above and below. “The Middle Ground” was written by Mervine’s husband, Keith.

Stage veteran Alex LaClair of La Plata, who is a baker at the Charles Street Bakery, portrays God.

“It’s really funny for one thing,” said director Laurie Foster, who lives in Lusby and is an engineer with the U.S. Navy, and who last directed 2018’s “Crimes of the Heart” for NDCT. “It’s very lighthearted and it’s a bit sarcastic and the ‘Act God’ [act] is just, oh my gosh, over the top funny. They are definitely comedies and a little, tiny serious part in the middle and then the rest you’re just laughing the whole time.”

Foster, who began casting “A Nightmare Between Heaven and Hell” in July and Mervine, who started casting in August, said weather has forced most rehearsals inside.

“Hands down rehearsals have been the hardest,” Sherry Mervine said. “We’ve had no rehearsal space, and we haven’t learned how to control the weather yet. It seems like invariably every time I’m trying to pull the kids together [to rehearse] it rains. Zoom has been a godsend for all of us.”