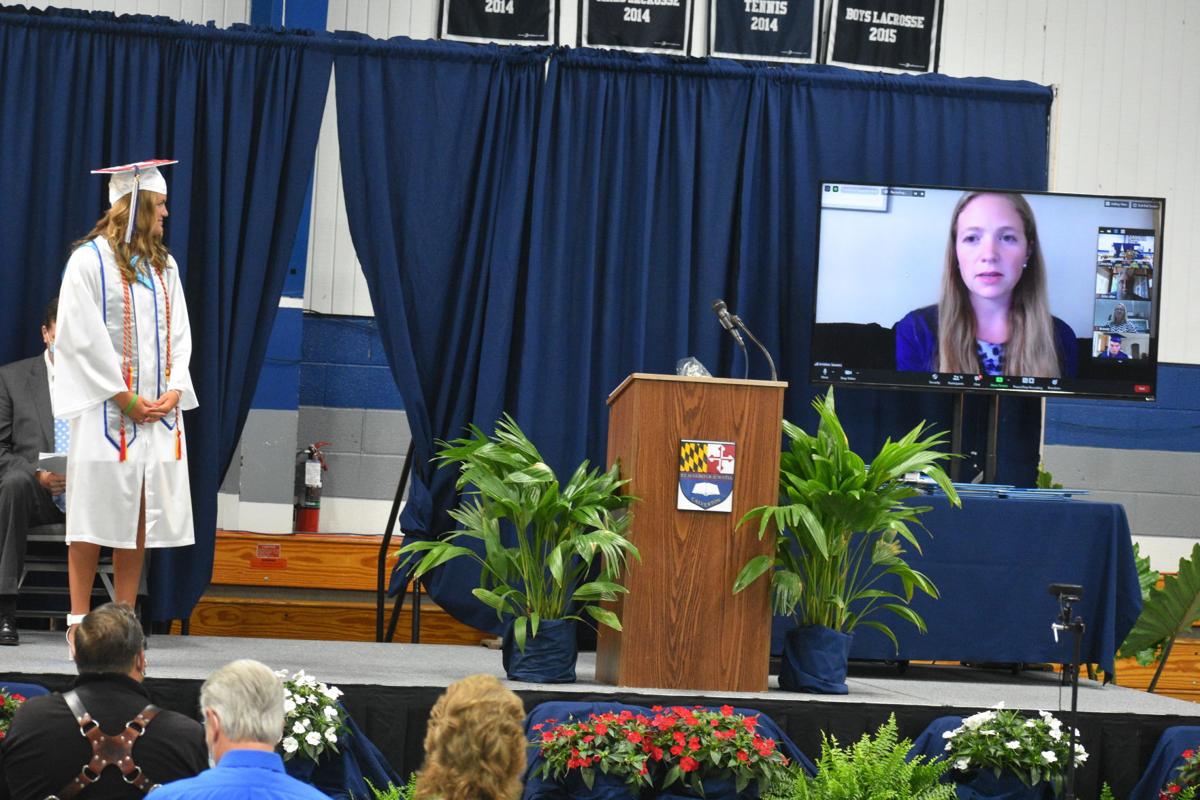 The Calverton School’s Sofia Jenkins is presented by teacher Kristine Sowers during the school’s 48th commencement ceremony on Saturday. 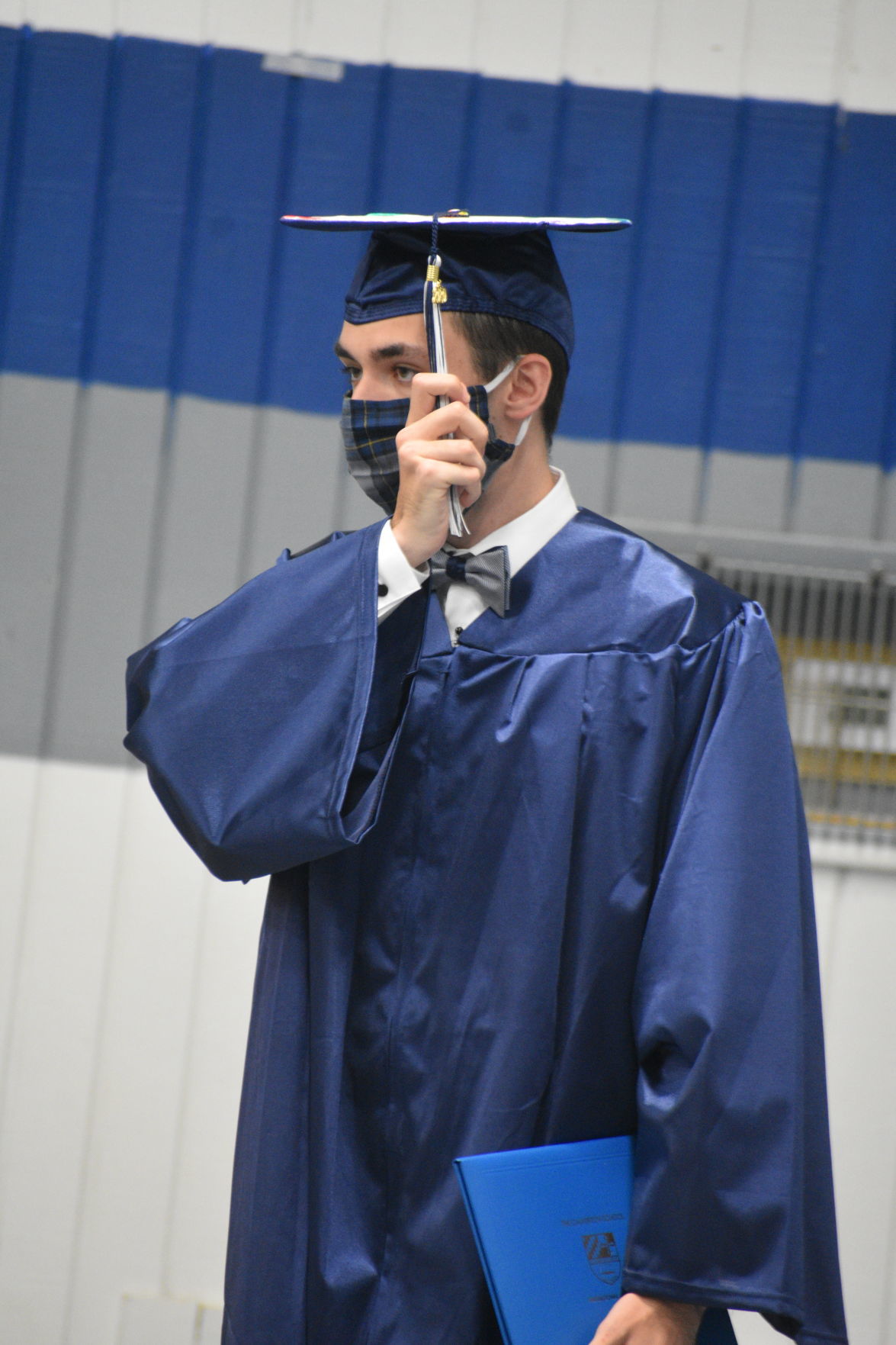 William Brady moves the tassle on his mortarboard to the left side to announce he has officially greduated. 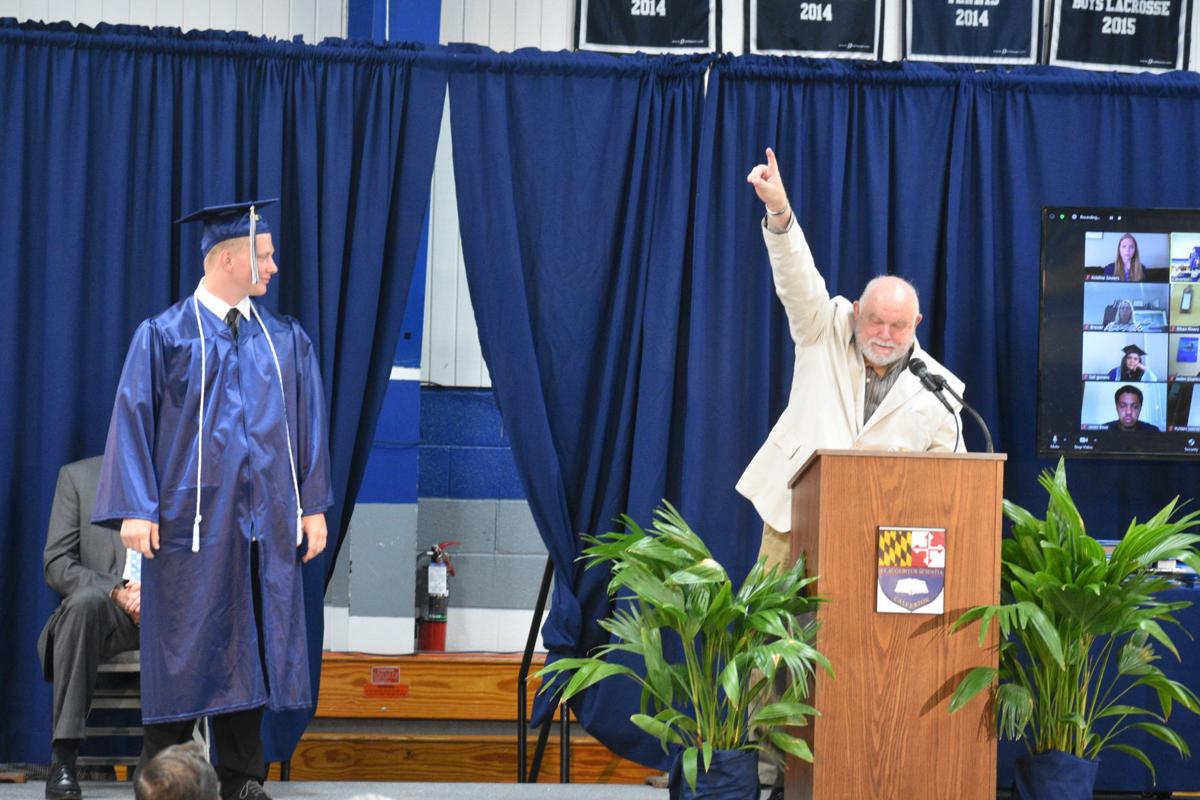 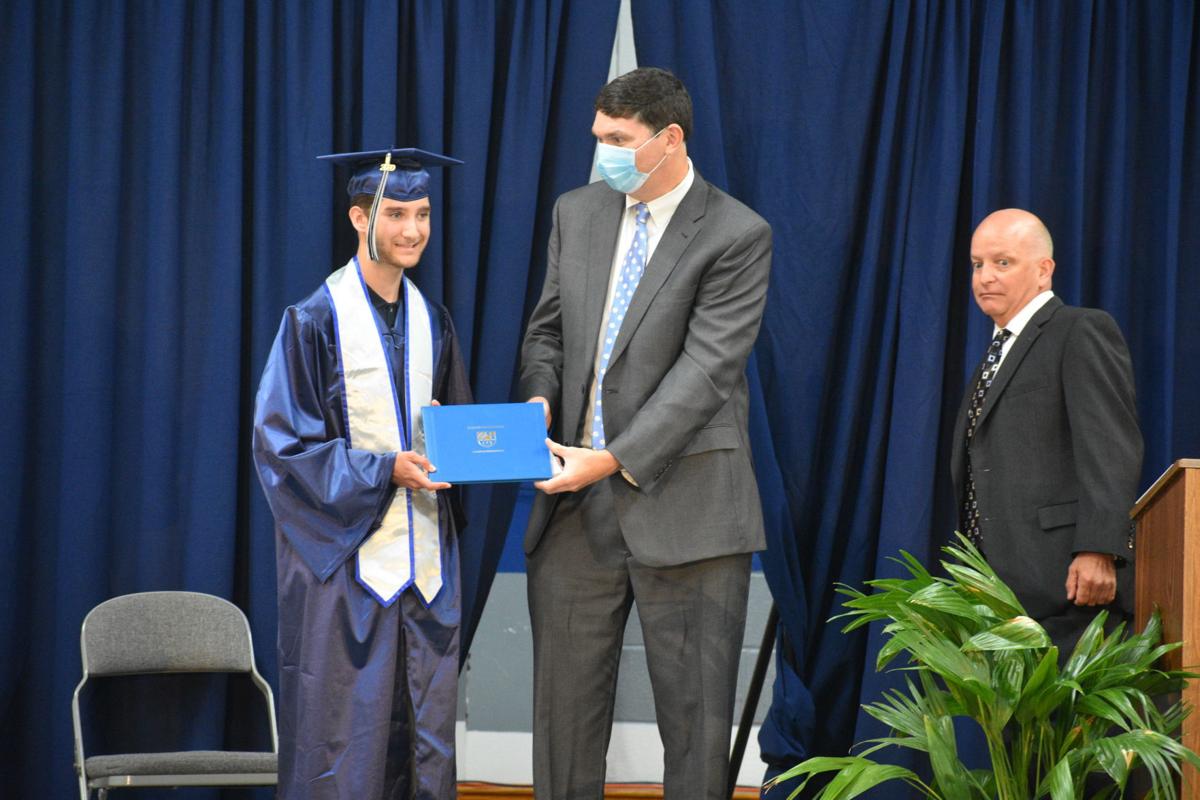 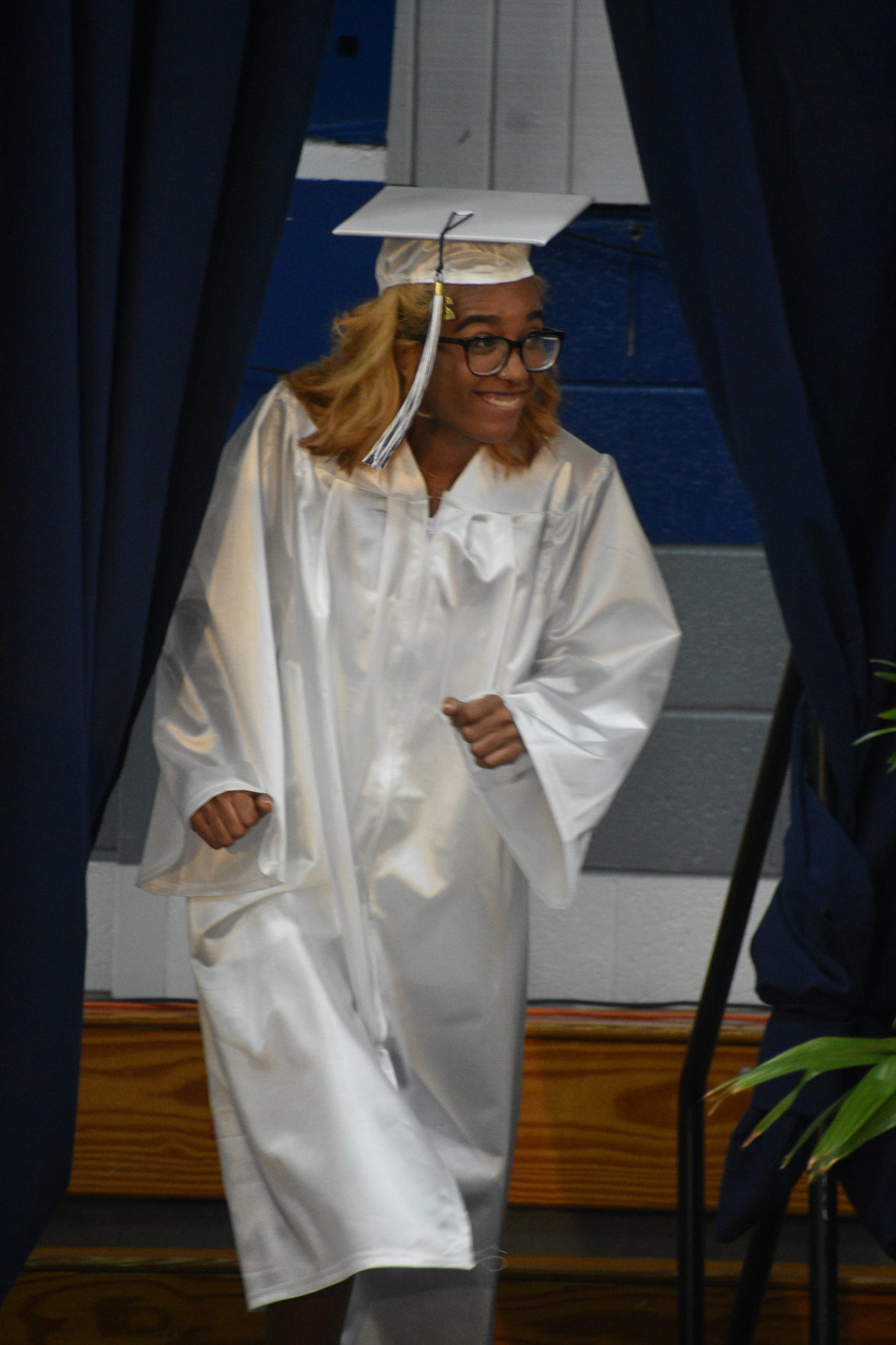 Above left, Caiya Jordan makes her way to the stage to receive her diploma. Above right, William Brady moves the tassle on his mortarboard to the left side to announce he has officially graduated. 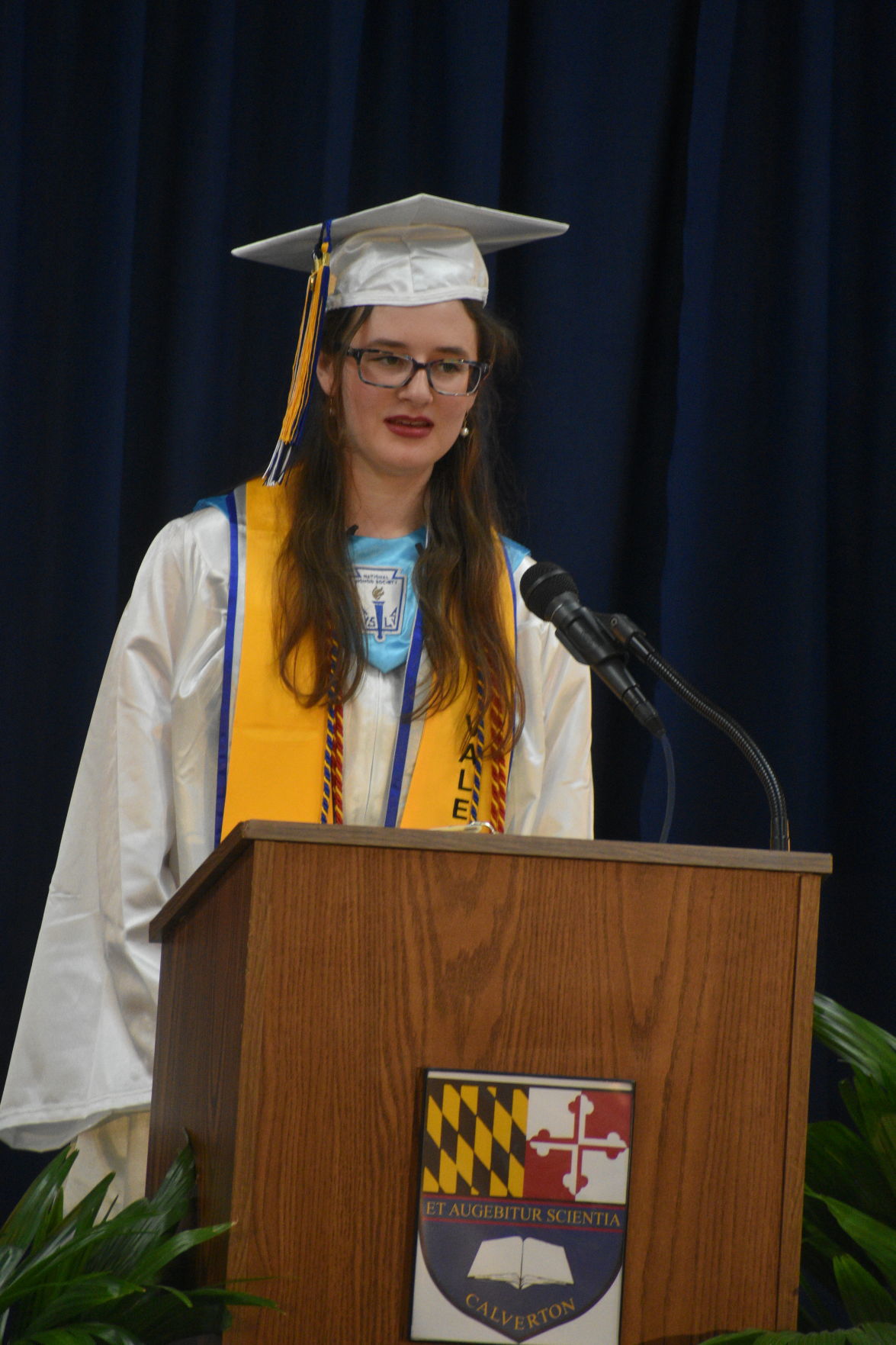 The Calverton School class valedictorian Cassandra Adler said the Class of 2020 “chose to hold ourselves accountable to the standards of our school, our teachers, and finally, ourselves.”

The Calverton School’s Sofia Jenkins is presented by teacher Kristine Sowers during the school’s 48th commencement ceremony on Saturday.

William Brady moves the tassle on his mortarboard to the left side to announce he has officially greduated.

Above left, Caiya Jordan makes her way to the stage to receive her diploma. Above right, William Brady moves the tassle on his mortarboard to the left side to announce he has officially graduated.

The Calverton School class valedictorian Cassandra Adler said the Class of 2020 “chose to hold ourselves accountable to the standards of our school, our teachers, and finally, ourselves.”

Sean Croker compared him and his fellow graduates as one big happy family, and now that family will head its separate ways after The Calverton School held its 48th Annual Commencement on Saturday.

“I was excited to go to a big [college] because it offered everything I wanted,” said Croker, who transferred from Patuxent High for his junior and senior years and will study architecture and play lacrosse at the University of Tennessee. “Today is bittersweet. I’m kind of happy to move on, but, at the same time, there are just 32 kids, so we’re just one big family.”

“It was a really good moment, and I was just happy we could do it at all,” said Hannah Huether, who will major in business and marketing at Ole Miss University in Mississippi said. “It’s really sad, and I go back and forth because it’s sad, but it’s happy at the same time. I’m just thankful that my class was close.”

“We are celebrating a remarkable class,” Head of School Christopher Hayes said. “Today will, in many ways, be a celebration of what holds us together, which is a love of learning, and these remarkable adults will make a powerful difference. We are stronger together by not focusing on what separates us, but instead by what unites us.”

The 32 graduates received 164 college acceptance letters, including 11 from Ivy League colleges, and more than $2.3 million in scholarship money. Its SAT scores were also more than 100 points above the national average.

“And this class is not only strong on paper,” said Arpana Shah, the president of the Calverton board of trustees.

“Their achievements outside the classroom and their ability to be a good friend, a teacher and a leader are what sets them apart.”

The graduates walked in unison – and all wore the same color plaid face mask – from Founder’s Hall to Leitch Memorial Gymnasium.

“Four years ago, I definitely pictured myself here,” said class salutatorian Casey Adler, who will continue her studies at Hamilton College in New York. “To put it mildly, the end of our senior year was not what we had hoped for or what I had envisioned all those years ago. Every student in the Calverton graduating class of 2020 showed their perseverance. When our final year started, we imagined cheers as we crossed the finish line together, instead because of self-quarantine, we chose to finish strongly on our own. We chose to hold ourselves accountable to the standards of our school, our teachers, and finally, ourselves.”

The class valedictorian was Caroline Holt.

“I’m extremely excited; it’s a close of a chapter in my life,” said Samir Shah, who will study biology at George Washington University. “I’ve been here for 11 years [since second grade], so it’s been a second home of mine. We’re all going our separate ways, so it’s nice to know that I got to spend as much time as I could with them.”

“I think it was really great to get together one last time. I was really sad when all this first happened because I thought I might never see anyone again, so it was great to do this tradition and see all my friends again,” said Natalie O’Brien, who will study criminology at the University of Tampa. “It’s been a wild [year], but honestly, it happened for a reason. We still all came together during this, and I remember the first time we all saw each other after the quarantine. It was just the best feeling ever. It was definitely a crazy year. Honestly, it’s really sad because I’ve been here since first grade, so it’s been my life. Every time I drive by, it kind of comes out like a tear in my eye.”

Each student was presented by a teacher. Dan Waldsburger made a fake phone call during his speech to Joshua Mooney, presented a canary yellow smiley face cap to Tyler Muir, a peacock feather-themed tie to Otway Zantzinger IV and a geode-filled rock to Remington Cutter.

“I haven’t been looking forward to this day because I have to leave my friends, but it’s a sense of accomplishment because all the hard work has paid off,” said Cutter, who will study criminology at West Virginia University. “I went to middle school with these guys, and now we’re finishing up high school, and it’s been fun watching them grow and become the people they are.”

But the COVID-19 signs were everywhere. Guests had their temperatures taken before going into the gymnasium, families were limited to five members and then evenly spaced out from other families. The graduates sat in a staggered pattern several feet away from each other.

The event was also livestreamed for 12 teachers and students who were unable to make the event.

“It was interesting,” Cutter said. “Waking up and seeing everyone online for so many weeks is not the same thing as driving here and actually getting to talk to them. It was a completely different experience.”

“This group of 32 students was thrown the biggest curveball of their lives,” Arpana Shah said. “The times have changed, but these students have not.”

Science teacher Angela Popernack was voted on by the graduates to receive the Wanda T. King Award for teaching.