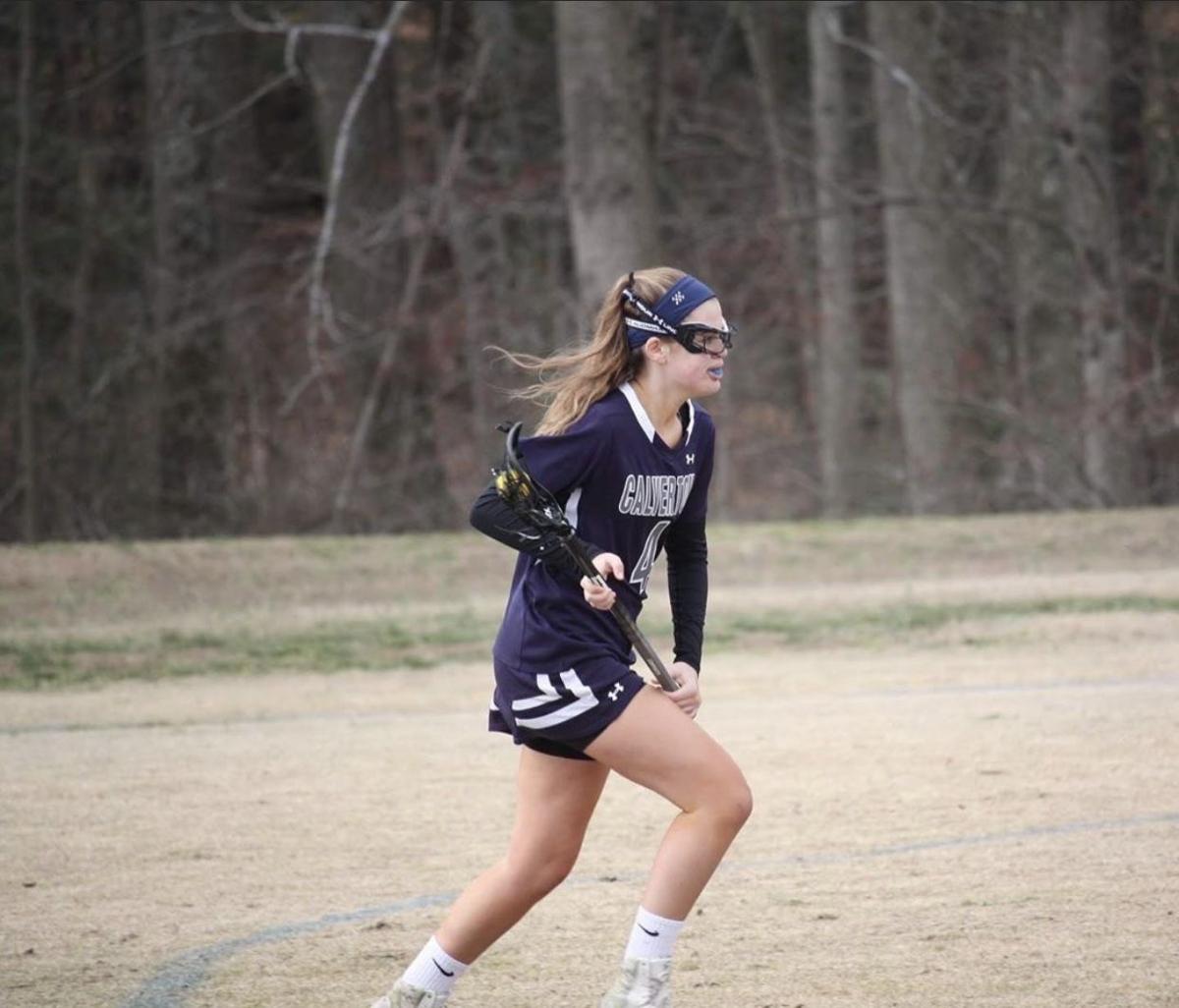 Sofia Jenkins, a graduate of The Calverton School who lives in Hughesville in Charles County, recently committed to Washington & Jefferson College, an NCAA Division III school in Pennsylvania located about a half-hour south of Pittsburgh. 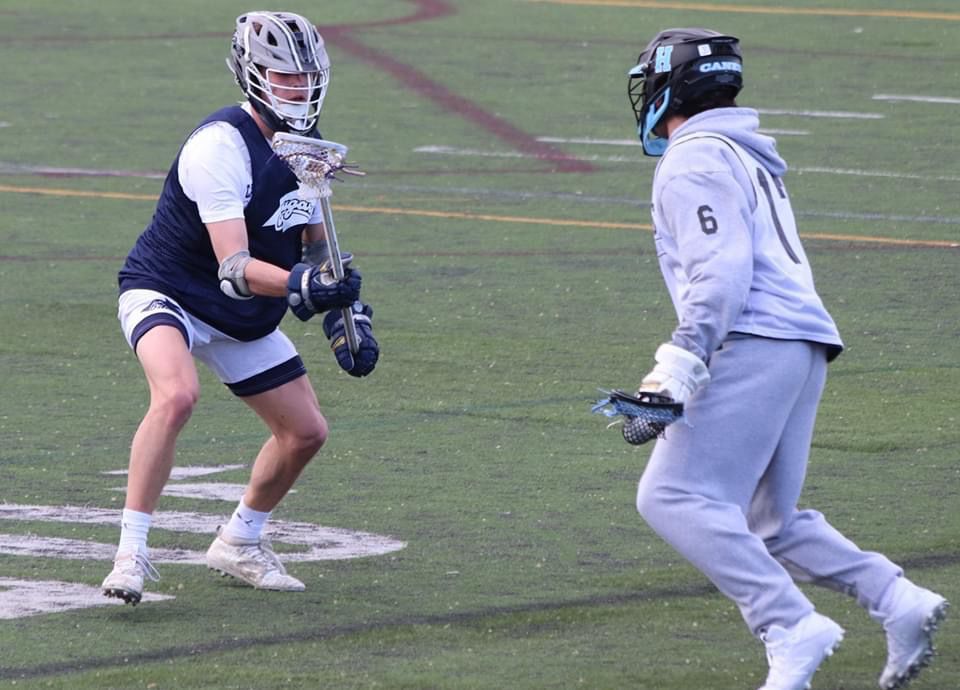 Sofia Jenkins, a graduate of The Calverton School who lives in Hughesville in Charles County, recently committed to Washington & Jefferson College, an NCAA Division III school in Pennsylvania located about a half-hour south of Pittsburgh.

A pair of lacrosse athletes from The Calverton School are going in separate directions to begin their collegiate careers.

Jenkins, who lives in Hughesville in Charles County, chose Washington & Jefferson for the small campus atmosphere.

“I kind of liked the sort of one-on-one I would have with the teachers,” she said. “The lacrosse players that I stayed with really kind of sold it for me and especially the coaches, too. And they have the major I was looking for and the pre-law program I was looking for, too.”

Jenkins plans to major in communications and go the pre-law track.

“I really want to do pre-law and they have a really good pre-law program,” she said. “98 percent of kids who do pre-law get accepted to law school after college and that really sold it for me because I’ve always wanted to be a lawyer just because my dad is an attorney, so I kind of had that influence growing up and I really liked the program that W&J had.”

Jenkins joins a Washington & Jefferson women’s lacrosse program that has reached its conference tournament championship game each of the four seasons — 2018 and 2019 as a member of the Presidents’ Athletic Conference, which the school is a member of now, after winning titles in 2016 and 2017 as a member of the Ohio River Women’s Lacrosse Conference — prior to the 2020 campaign, which was canceled after playing seven nonconference games due to the coronavirus pandemic.

“The coaches [head coach Alison Valerio and assistant coach Bridget Lawless] are really nice,” Jenkins said. “They’ve been really good at like keeping everybody up to date during the coronavirus and making sure that they’re all staying on top of our workouts for the summer and trying to make sure everything is easy as possible even with all the circumstances right now.”

Jenkins started playing lacrosse in the seventh grade with Southern Maryland Revolution and noted that the coaches there got her to love the sport.

“I wasn’t really super serious about it until about 10th grade because I wasn’t sure if I wanted to play in college yet,” she said. “But I started off playing defense and then sort of worked my way to midfield and now I take the draw. I’m super tall [5-foot-10], that’s where coaches kind of utlitize me as getting up to take the draw. I mean I love it, I love being on all sides of the field so I can be of help anywhere the ball is.

“I really started to get serious about it in the summer of my junior going into senior year, mainly like the big recruiting time for colleges. And basically my mindset was like if I found the right college, but I loved the college and the team, then I would play in college, but if I didn’t find that, then it wasn’t the end of the world. And Washington & Jefferson really did that for me, I fell in love with the school and then I fell in love with the team, which was perfect for me.”

Jenkins had three different coaches in high school, but has a close bond with current Calverton head girls lacrosse coach Helen Kuhn, who was also a travel coach for a bit of her young career.

“I am ecstatic that Sofia has been given an opportunity to play at Washington & Jefferson,” Kuhn said. “The day I saw Sofia’s skills and passion, I knew she would be a great addition to any collegiate team.”

Lane found his college fit with Whittier, deciding to go west over Maryland schools Stevenson and Washington and Marietta College in Ohio.

“I picked Whittier for many reasons, mainly because the major they offered,” said Lane, who plans to major in kinesiology/sports medicine. “I looked first at the academics and then athletics. One big factor also was the location. I like the warm weather beach vibes. Along with that I like going far away from home, this allows me to keep reaching out of my comfort zone and experience new things.”

“The lacrosse program at Whittier is solid and only improving,” Lane said. “Whittier is the only Division III lacrosse program in the state of California. That means, a lot of travel and competing with the best to make our name stand out. For instance, in the 2019 season, Whittier fell short to Cabrini, who went on to win the D-III championships.”

Lane, who lives in Powell, Ohio, which is about 30 minutes north of Columbus, started playing lacrosse at a young age and then took a break to pursue baseball. He was playing baseball and lacrosse by the time he was in seventh grade and ultimately decided to pick lacrosse and later transferred down to Calverton halfway through his junior year.

“One thing I learned in my four years of playing sports is when you feeling quitting, don’t, because if you do, you will miss out on a lot of opportunities,” Lane said.

Lane noted that his Calverton coaches really helped him get his college search going.

“They opened many doorways and many connections,” he said. “I am very grateful for all my coaches and what they have provided and supported me with. They have always kept me focused and on the right track.”

Calverton, which played just one full game this spring, headed into the 2020 campaign with a new coach in Mark McNeill.

“I think that’s a good opportunity for him. I think he’ll fit in right there,” McNeill said. “Unfortunately, I didn’t have the whole season to coach the team, but I think Carter is going to make a great defenseman at the next level.”