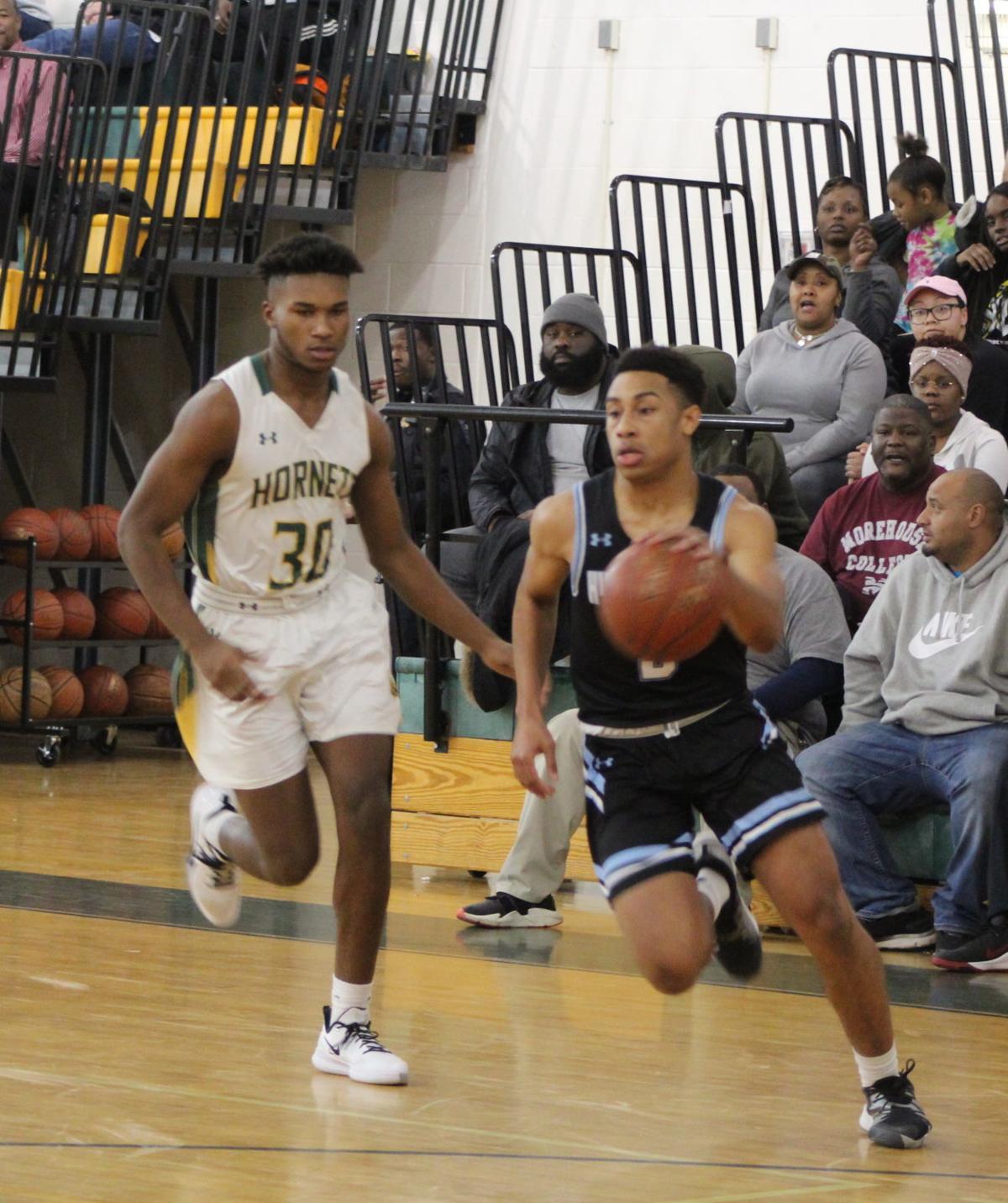 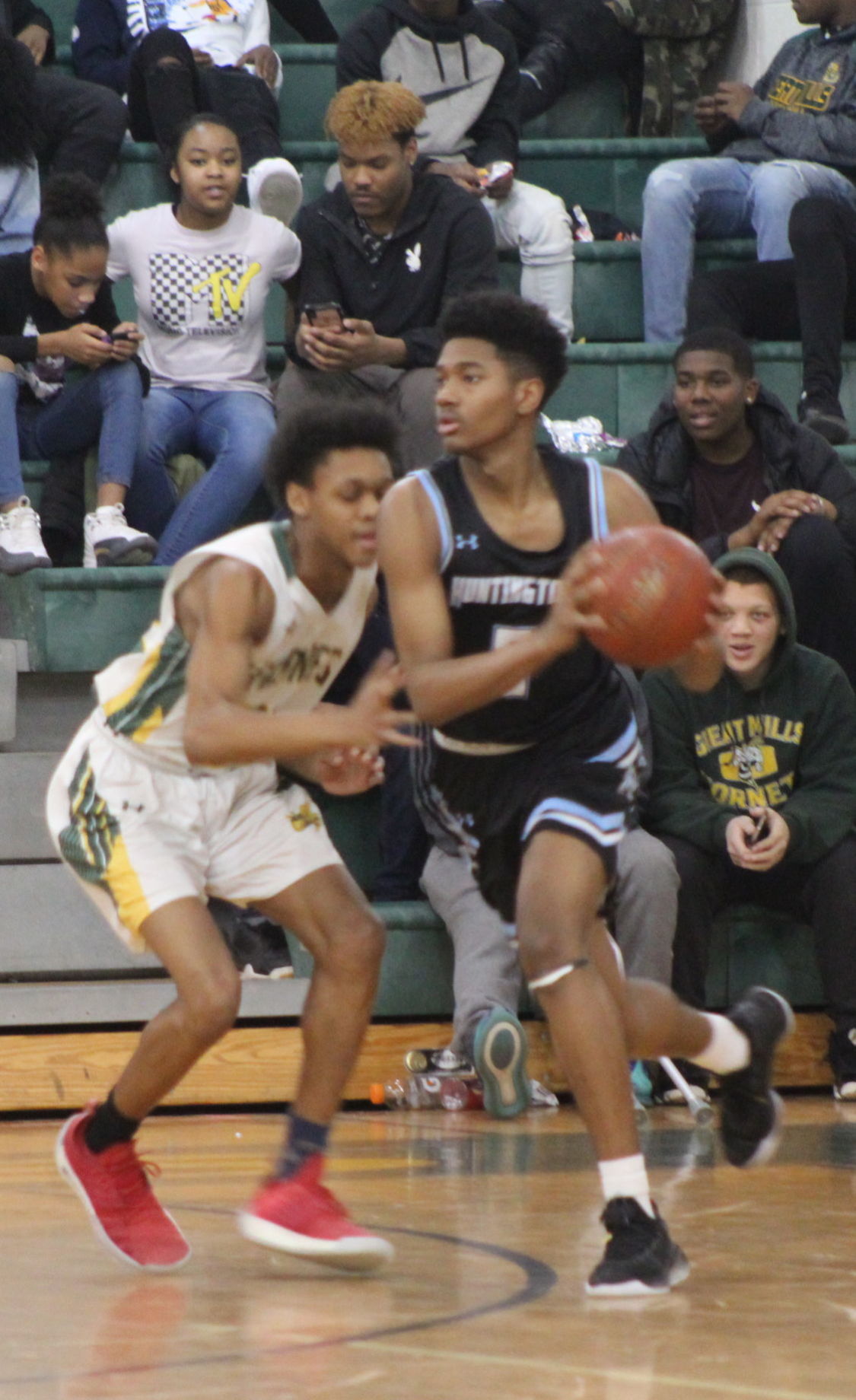 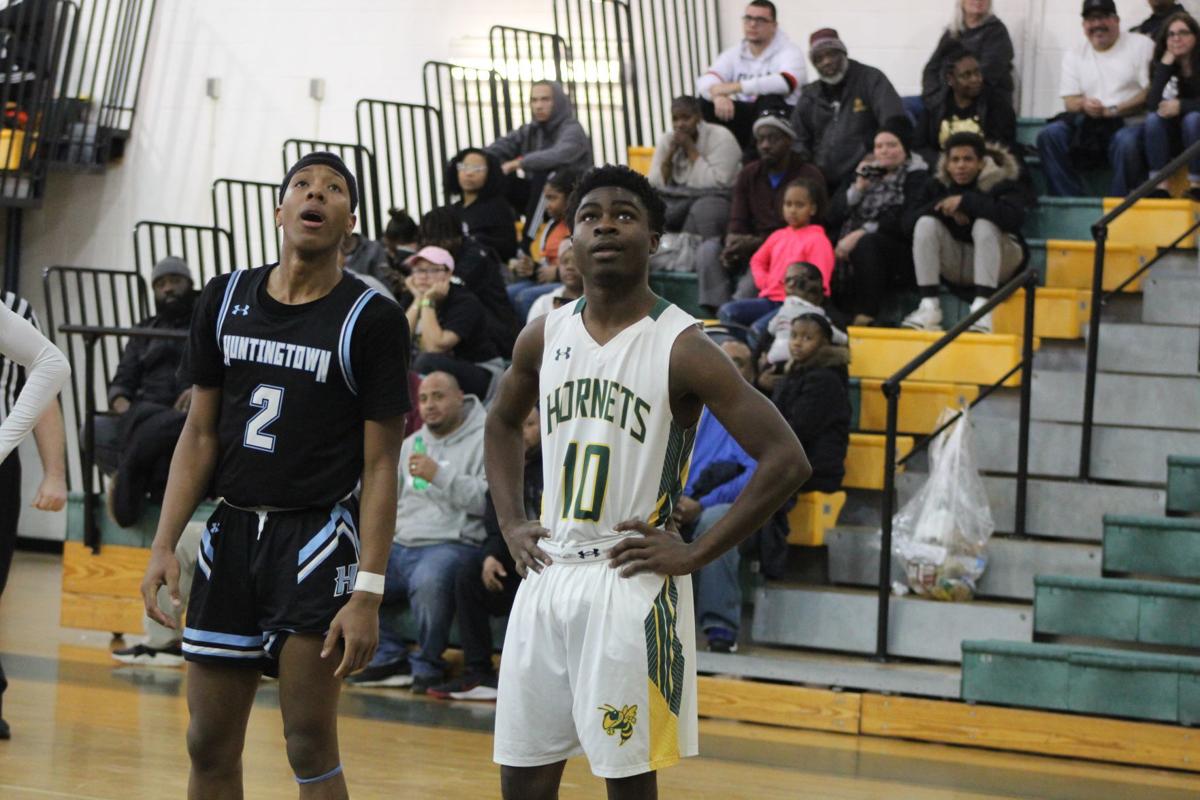 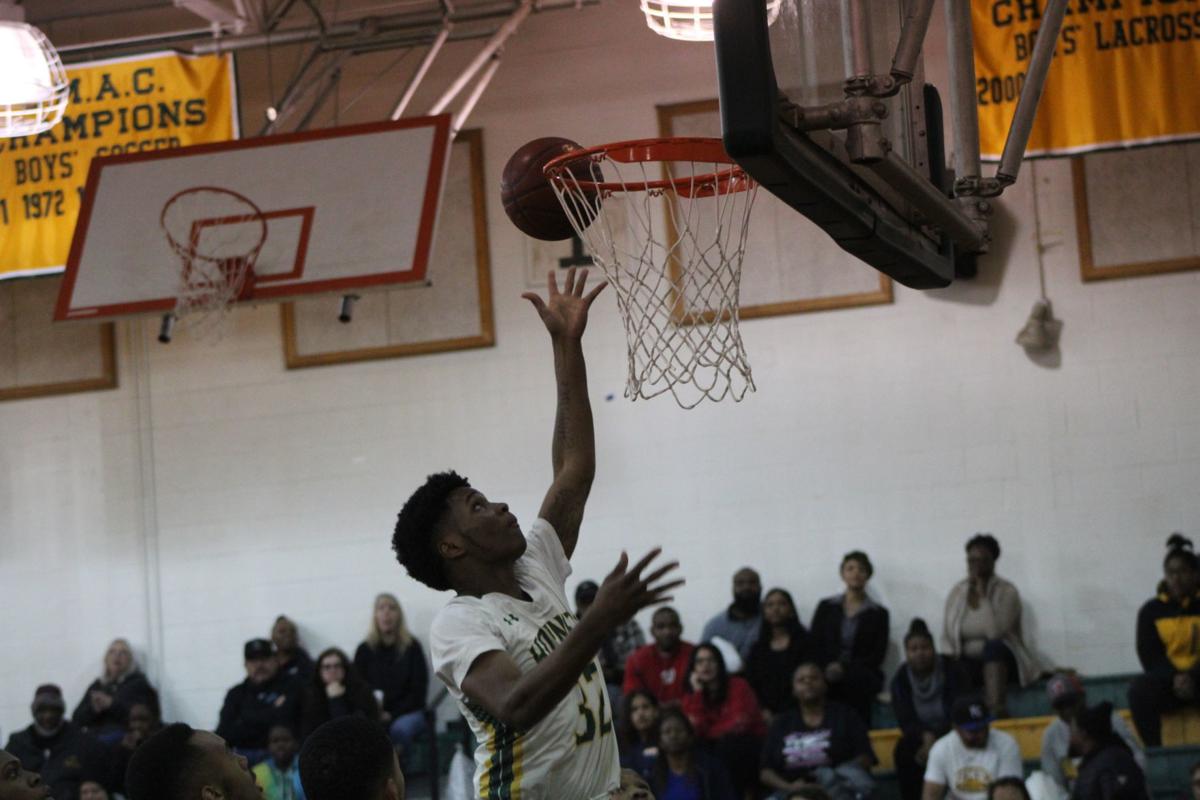 Great Mills junior Maurice Kent finishes a shot at the rim during Wednesday’s SMAC Chesapeake Division game versus visiting Huntingtown. Great Mills prevailed with an 81-72 victory to remain undefeated in the division. 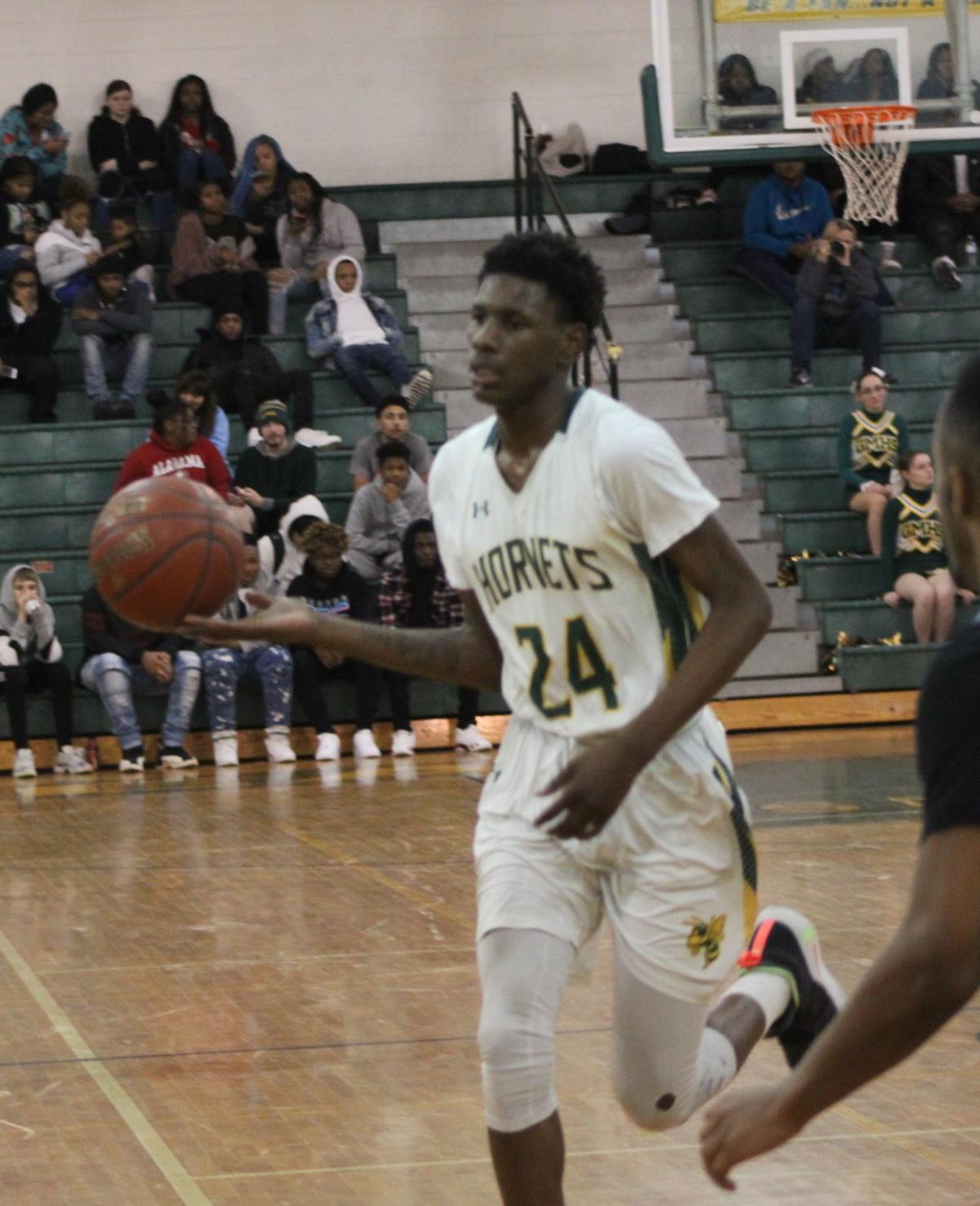 Great Mills senior Jarale Barnes flips the ball to a teammate during Wednesday’s SMAC Chesapeake Division game versus Huntingtown. Barnes finished with nine points in the Hornets’ 81-72 victory over the Hurricanes.

Great Mills junior Maurice Kent finishes a shot at the rim during Wednesday’s SMAC Chesapeake Division game versus visiting Huntingtown. Great Mills prevailed with an 81-72 victory to remain undefeated in the division.

Great Mills senior Jarale Barnes flips the ball to a teammate during Wednesday’s SMAC Chesapeake Division game versus Huntingtown. Barnes finished with nine points in the Hornets’ 81-72 victory over the Hurricanes.

Entering Wednesday night’s Southern Maryland Athletic Conference Chesapeake Division game at Great Mills High School, the Hurricanes of Huntingtown and Hornets of Great Mills held undefeated records in the division, so something had to give.

The Hurricanes entered the battle of unbeatens in the SMAC Chesapeake Division having won their last two games by a combined five points. But after eight minutes of play on Wednesday night, the visitors found themselves trailing 22-7.

“We didn’t come out ready to play and came out a little lackadaisical,” Huntingtown head coach Tobias Jenifer said. “[Great Mills] came out ready to go at home. This is a tough place to play. I don’t think we have won a game down here in at least four to five years that I’ve been on the staff. They make it a tough place to play. I commend [Great Mills head] coach [Jeff] Burrell for what he’s been able to do down here this time of year.”

The strong start from the hosts helped carry Great Mills to an 81-72 victory over the Hurricanes.

“This was the battle that we expected,” Burrell said. “We knew [Huntingtown] was going to be well-coached and have size and good athletes. We figured if we started off well, it would help us out.”

Great Mills (11-3, 4-0 SMAC Chesapeake) got plenty of contributions in the opening quarter as eight different players scored and no one had more than two baskets in the balanced scoring attack.

Hornets senior Parth Patel led the hosts with six points after the opening quarter on two three-pointers off the bench.

“Our kids work hard at practice and they worked hard out here,” Burrell said. “I couldn’t have asked for much more on the defensive end. They played with passion and intensity. I am proud of my boys.”

Sophomore guard Isiah Mills gave the Hornets their largest lead of the night at 43-20 with 1 minute 15 seconds left in the first half after knocking down one of his game-high five triples.

“We spotted them 15 points in the opening quarter and that is a tough hole to dig yourself out of. I don’t care who you are or how good you are,” Jenifer said. “We didn’t do ourselves any favors. We didn’t make free throws and finish around the basket and they got out to a big lead in the first quarter. If you take away that first quarter, I think we played a solid three quarters that was good enough to win.”

In the second half, Huntingtown continued to chip away at its deficit. After trimming the Hornets’ lead to 10 points multiple times in the third quarter, the Hurricanes pulled to within single digits, trailing 63-54, with 6:16 left in the game.

“I am very proud of how our team fought back,” Jenifer said. “They didn’t just give up and pack it in. We have to do better at starting the games and holding that intensity for a full 32 minutes. I don’t think we have put together a full game yet this year.”

With about three minutes left to play, Huntingtown got its deficit down to just seven points, trailing 69-62, but a triple from Great Mills junior Kevin Woodland as the shot clock expired proved to be an eventual dagger for the Hurricanes’ comeback attempts.

“We will hit shots and we will miss shots, but runs will happen,” said Burrell, whose team is slated to be at Leonardtown at 6:30 tonight. “It’s basketball. You just have to weather the storm and you will be fine.”

The Hurricanes didn’t get back to within single digits again until a layup from sophomore Jayden Holland counted as the buzzer sounded.

“We have a pretty good record and some decent wins under our belt, but we have to beat the good teams,” Jenifer said. “We will compete and take care of the teams that we are supposed to take care of, but when you are on the road you have to steal some of those. We didn’t get that tonight, but it is back to the drawing board.”

“We have a resilient group of kids and I have no doubt that we will bounce back,” said Jenifer, whose team is scheduled to host Calvert at 6:30 tonight. “We have to get back to practice and go over the little things and pay attention to details and we will be alright.”

Mills led the Hornets with a game-high 26 points and junior Terrance Green added 11 as the only two Great Mills players to finish in double figures.