St. Mary’s College of Maryland junior field hockey player Meghan Ronan received a SMESPY as being named the school’s female player of the year for the fall sports season. 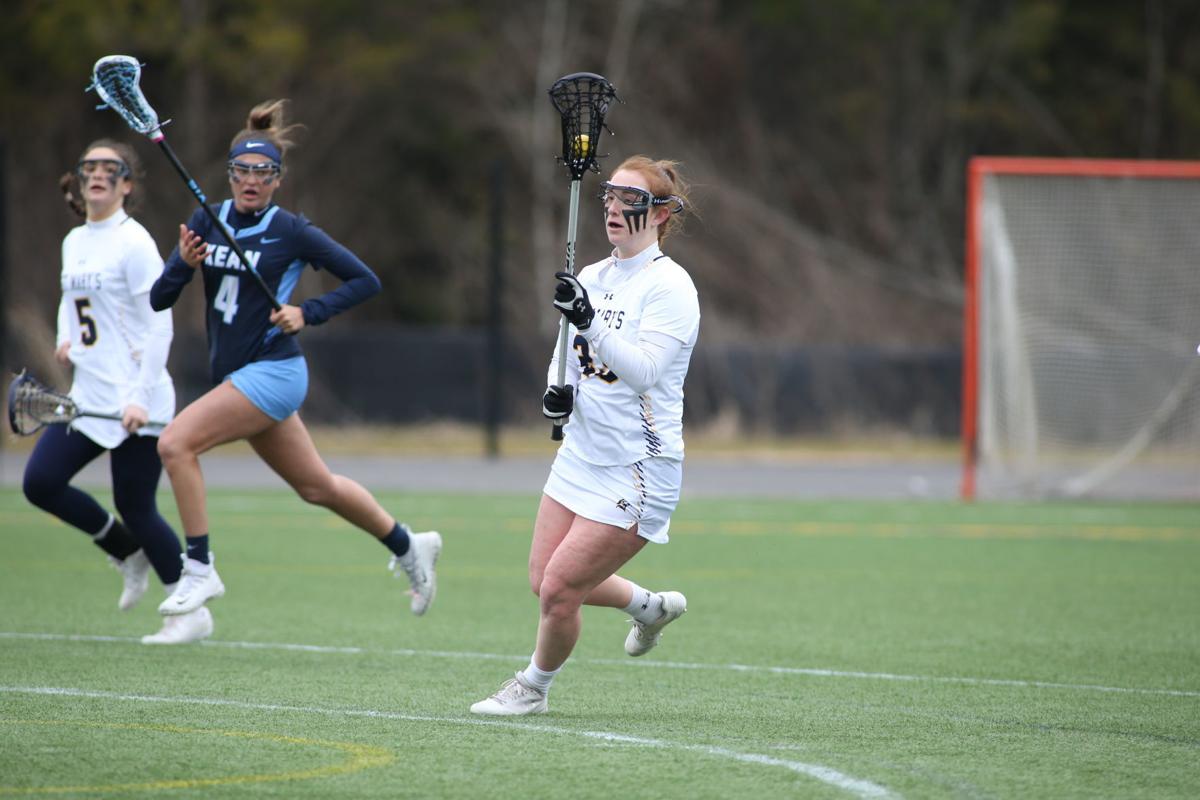 St. Mary’s College of Maryland senior women’s lacrosse player Kate Bartholomew received a SMESPY as being named the school’s female player of the year for the spring sports season.

St. Mary’s College of Maryland junior field hockey player Meghan Ronan received a SMESPY as being named the school’s female player of the year for the fall sports season.

St. Mary’s College of Maryland senior women’s lacrosse player Kate Bartholomew received a SMESPY as being named the school’s female player of the year for the spring sports season.

St. Mary’s College of Maryland’s Student-Athlete Advisory Committee and Athletic Department acknowledged several of its athletes from the 2019-2020 academic year with SMESPYS awards, which were announced through the athletic department’s social media accounts May 11 to 17.

Matt Barlow (men’s soccer) and Celina Kaufman (field hockey) were named male and female rookies of the year for the fall.

Barlow started all 20 games for the Seahawks. Kaufman had 11 goals and one assist and was selected to the All-Capital Athletic Conference second team.

Leo Boucher (sailing) and Meghan Ronan (field hockey) were the fall’s male and female players of the year.

Among Boucher’s accomplishments was becoming a national champion at the College Sailing Singlehanded National Championships. It marked the first time that a Seahawks sailor had ever won the men's singlehanded championship.

Ronan finished with 29 points, second in the CAC, and was selected to the All-CAC second team.

"It was very exciting to see Meghan receive Female Player of the Year,” St. Mary’s head field hockey coach Jessica Lanham said in a college news release on May 19 announcing the SMESPYS awards. “She works incredibly hard on the field, in the classroom and in the community. I am extremely proud of Meghan and her accomplishments."

Grant, a Thomas Stone High School graduate, played in all 27 games for the Seahawks and made 22 starts. He averaged 16.3 points and 6.0 rebounds per game and shot 45% from the field.

“Gary Grant was the one of the hardest working players on the court and off the court in our program,” St. Mary’s head men’s basketball coach Chris Harney said in the May 19 news release. “His impact was felt from day one and he just keeps getting better and better everyday."

Orban scored 202 points on the season, which made him the men’s team’s high-point scorer. He broke school records in the 100- and 200-yard backstroke three times and twice, respectively, during the season and was selected to the All-CAC second team.

Litynski, a resident of Hollywood in St. Mary’s County, was the high-point scorer for the women's team for the second consecutive season. She placed first in the 100 freestyle at the CAC championships and earned All-CAC first-team honors.

"Brenna has a rare combination of being a very driven competitor while also being dedicated to good sportsmanship,” St. Mary’s head swim coach Casey Brandt said in the May 19 news release. “Her attitude and approach to competition are key to her success and set a great example for our team."

Stephen Alam (men’s tennis) and Sydney West (women’s rowing) were named rookies of the year for the spring.

Alam finished the season, which was cut short due to the coronavirus pandemic, with a 5-0 record in singles play and 5-2 in doubles.

West scored a time 7 minutes 36.0 seconds in the 2,000 meters, a school record, and a 20:54 mark in the 5,000, which is the second fastest in school history. She was selected to the All-Mid Atlantic Rowing Conference Novice Team.

Brown led the Seahawks and the CAC in assists (31) and points (48), while being second on the team in goals (17) before the rest of the season was canceled. He was named to the 2020 Maverik Men's Lacrosse DIII Media All-American fourth team.

Bartholomew scored 29 goals in seven games, which was tied for the conference lead when the season was canceled. She added nine assists for 38 points, which was most in the CAC.

"Kate was a fantastic leader for our team and a phenomenal force on the field,” St. Mary’s head women’s lacrosse coach Erin McDonnell said in the May 19 news release. “She led the team by example day in and day out with such grace, especially during the adversity of having our season cut short. She will be greatly missed.”

Orban and Elizabeth Johnson (women’s swimming) were named as male and female scholar-athletes of the year and Kelbey Egerland (field hockey) received the athletic director’s award.

Egerland made 127 saves in goal for the Seahawks with a 1.11 GAA. She was named to the All-CAC Academic Team and NFHCA National Academic Squad in multiple years and was president of the SAAC leading many community service initiatives.

"It has been a pleasure watching Kelbey grow these past four years and I can't think of anyone more deserving to receive the Athletic Director’s Award,” Lanham said in the news release. “Kelbey is a leader at St. Mary's within athletics and the outside community. She is a true representation of what it means to be a student-athlete at St. Mary's. I am extremely proud of Kelbey and know she has a bright future ahead.”