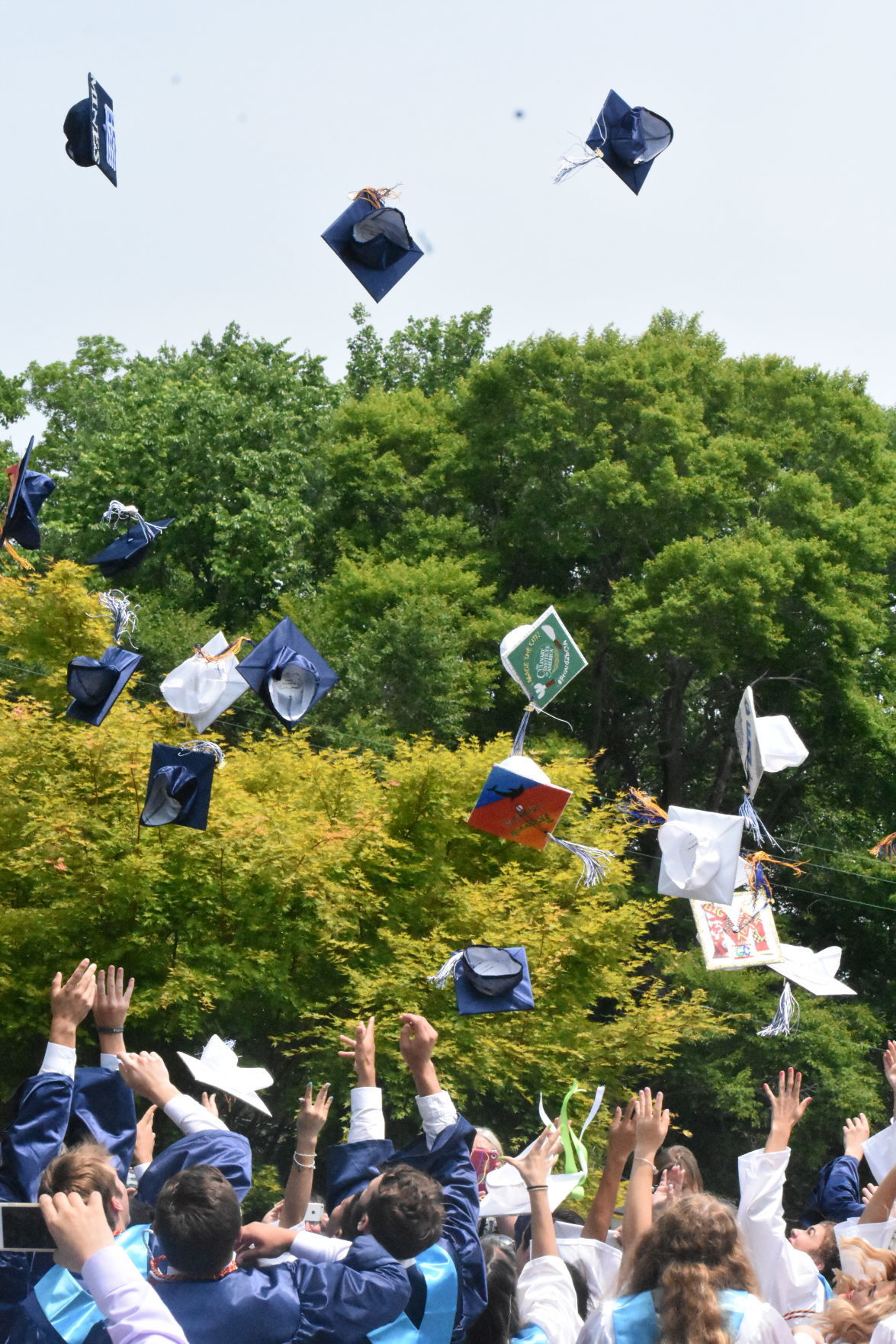 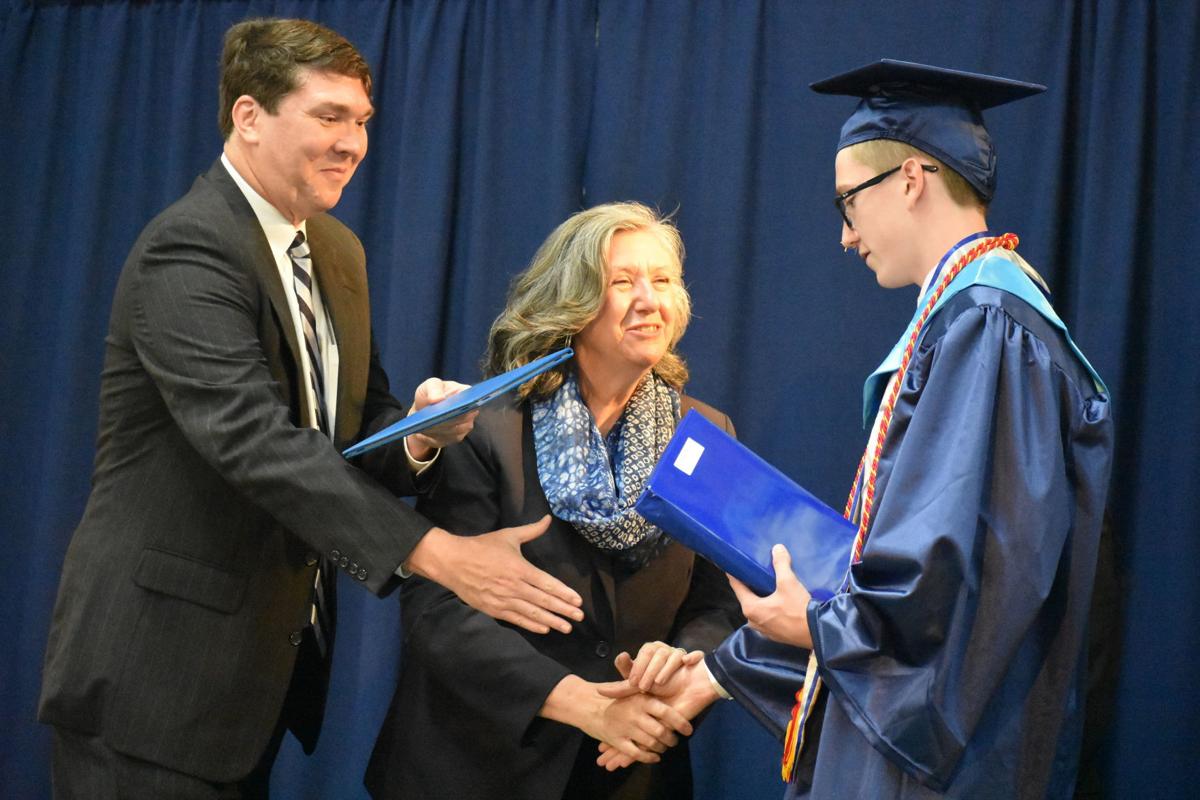 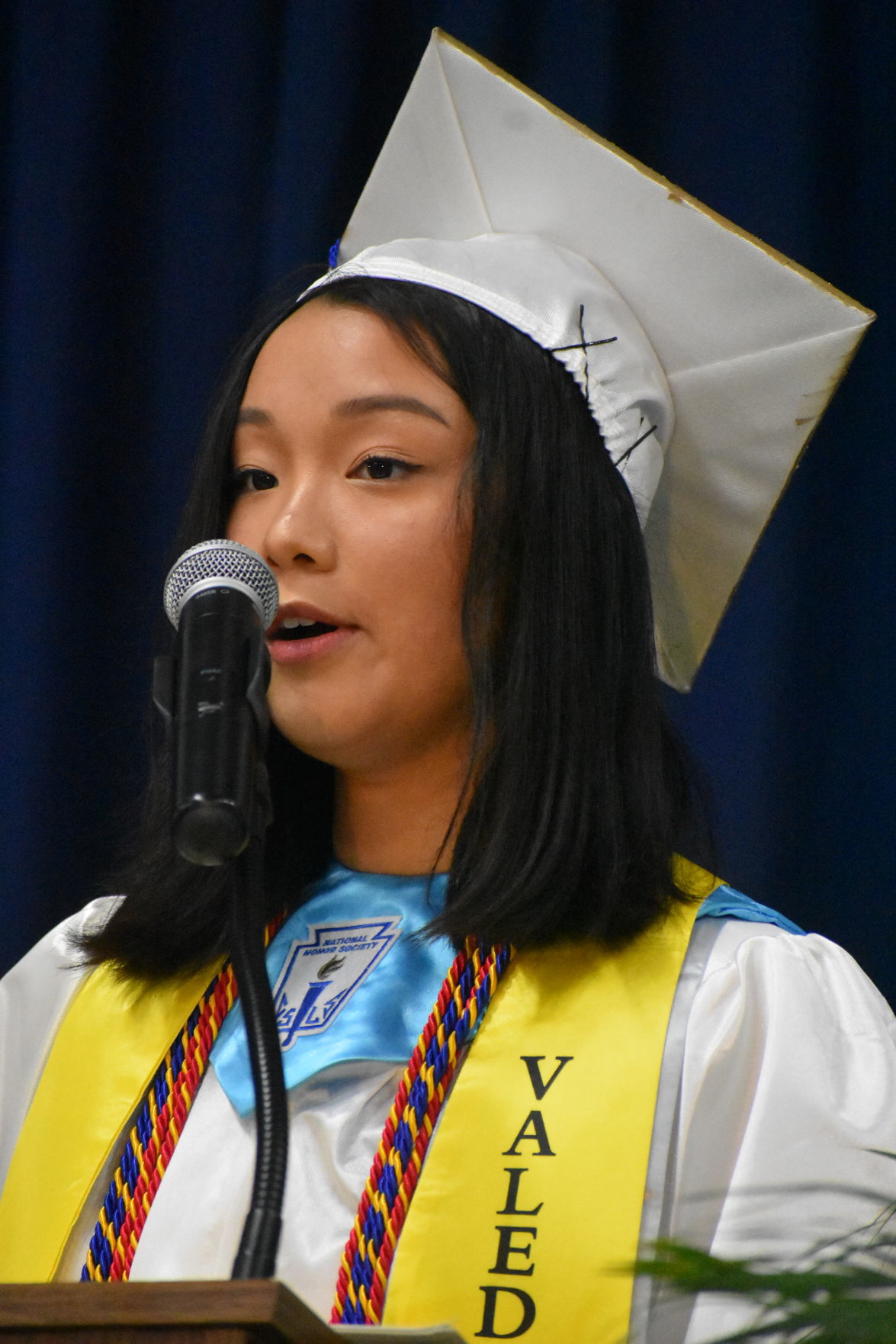 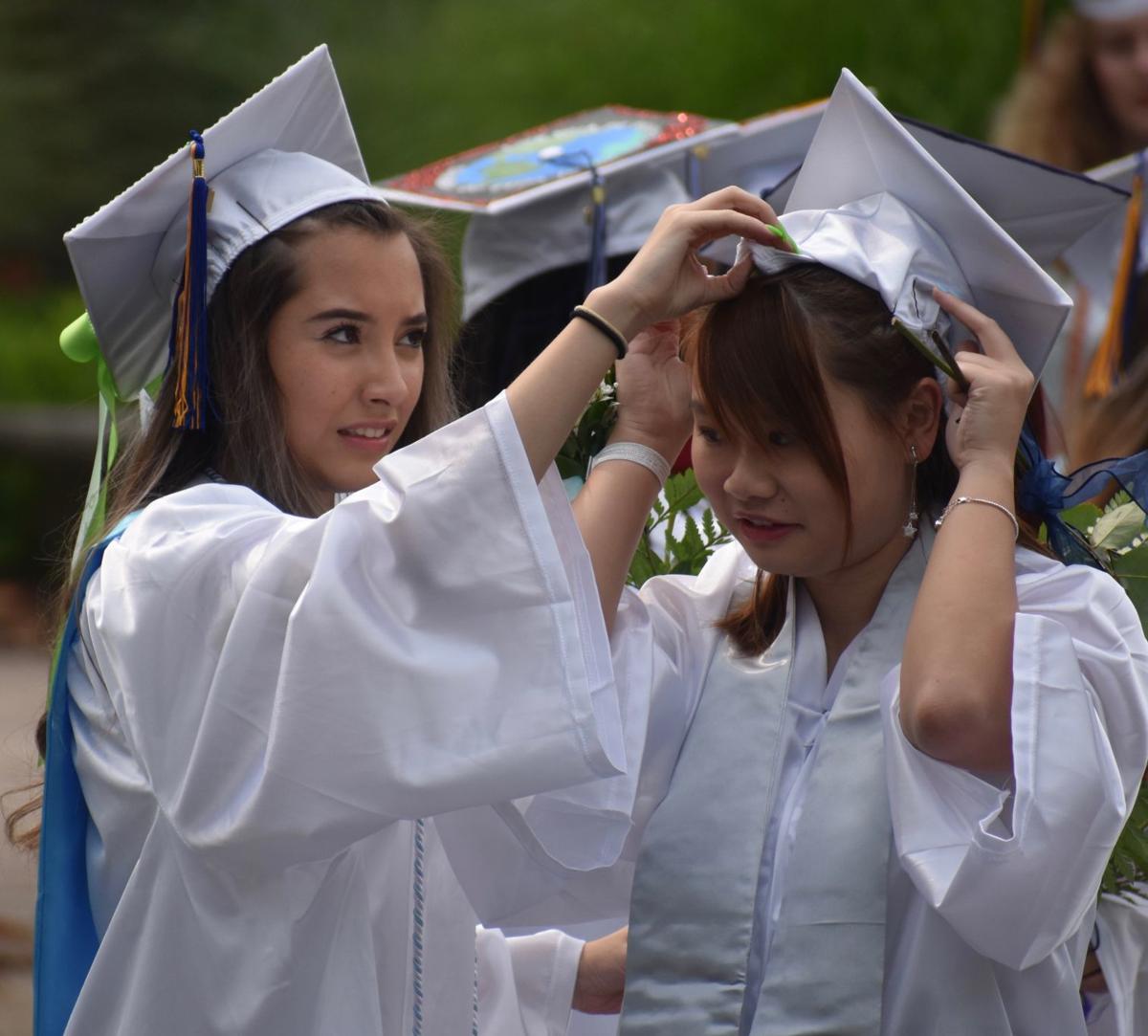 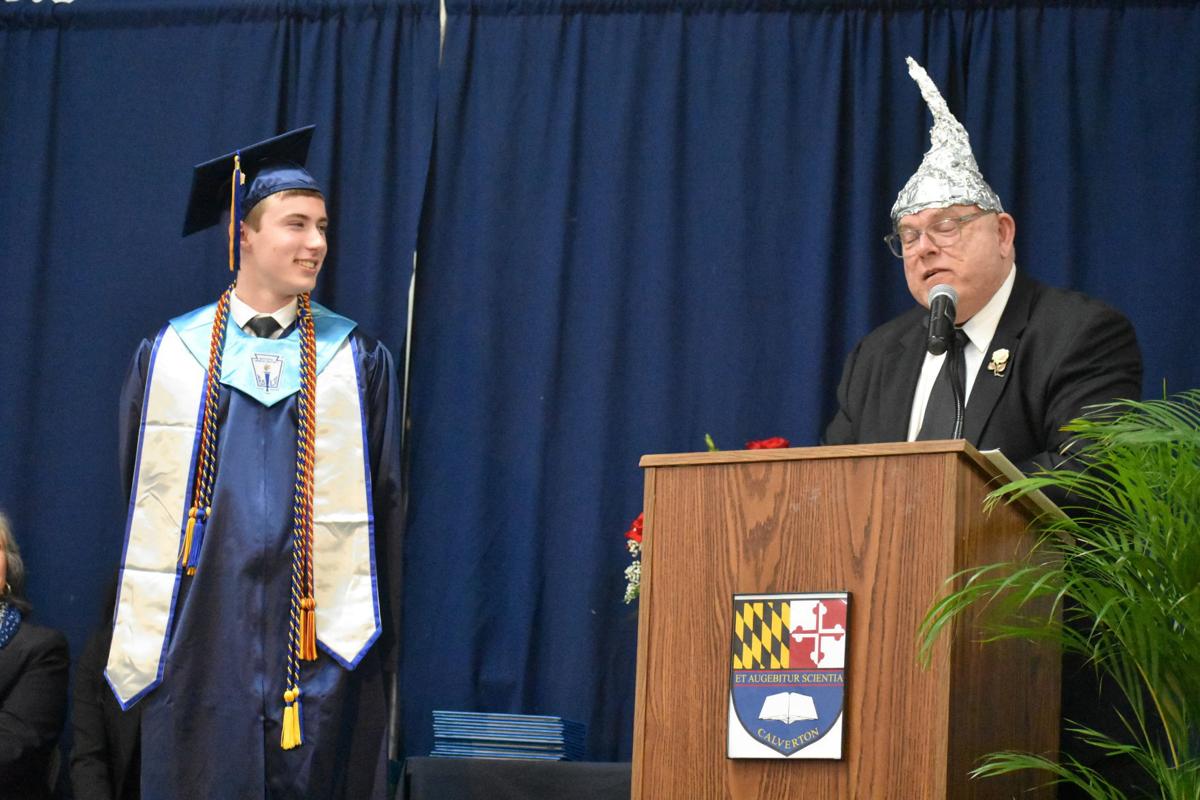 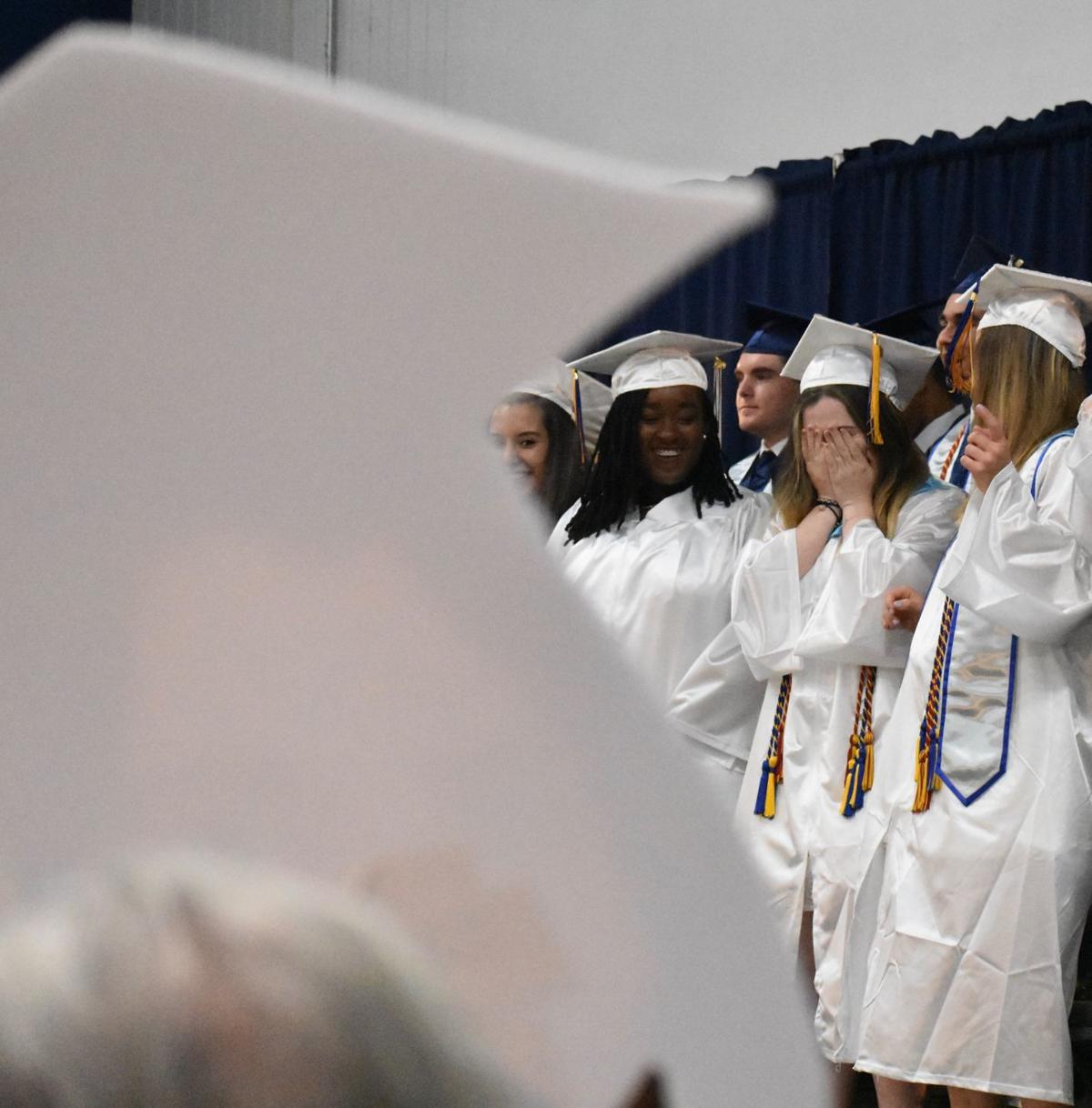 Graduate Mary Atkisson covers her face as her parents Mark and Kathy hold up an oversized photo of her head during Saturday’s commencement exercises. 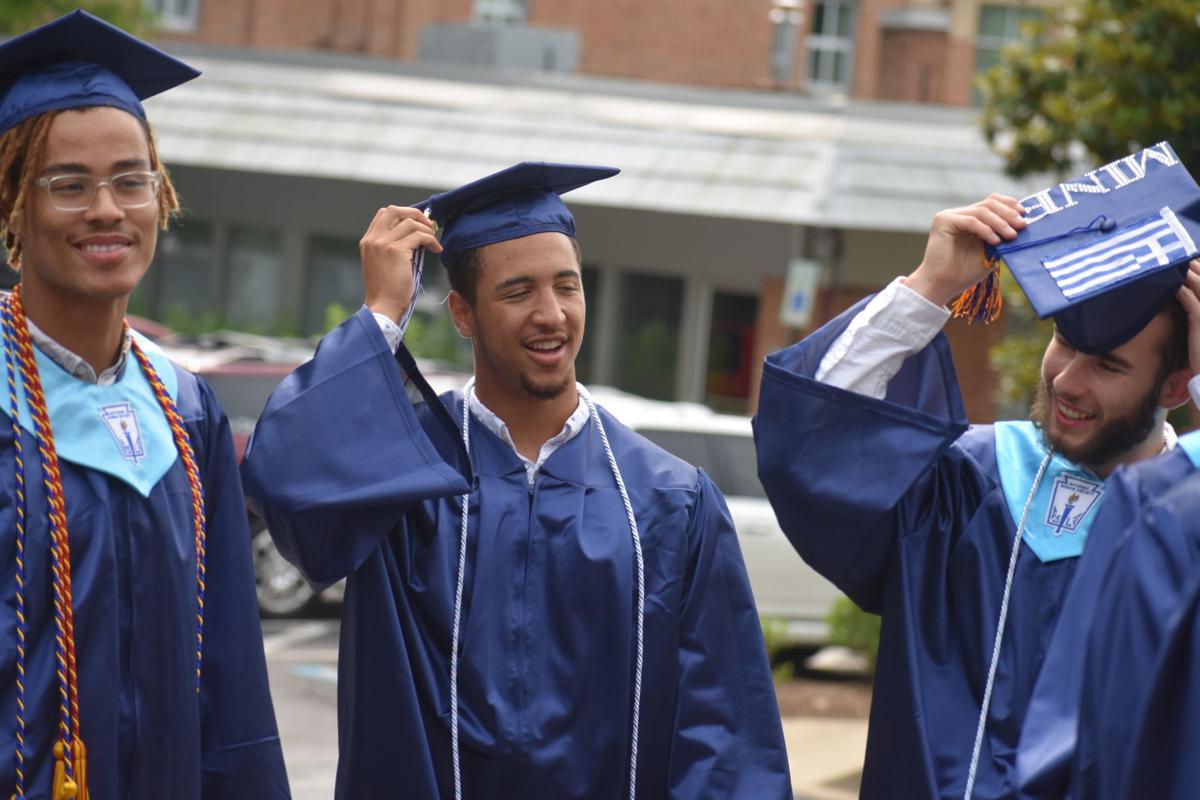 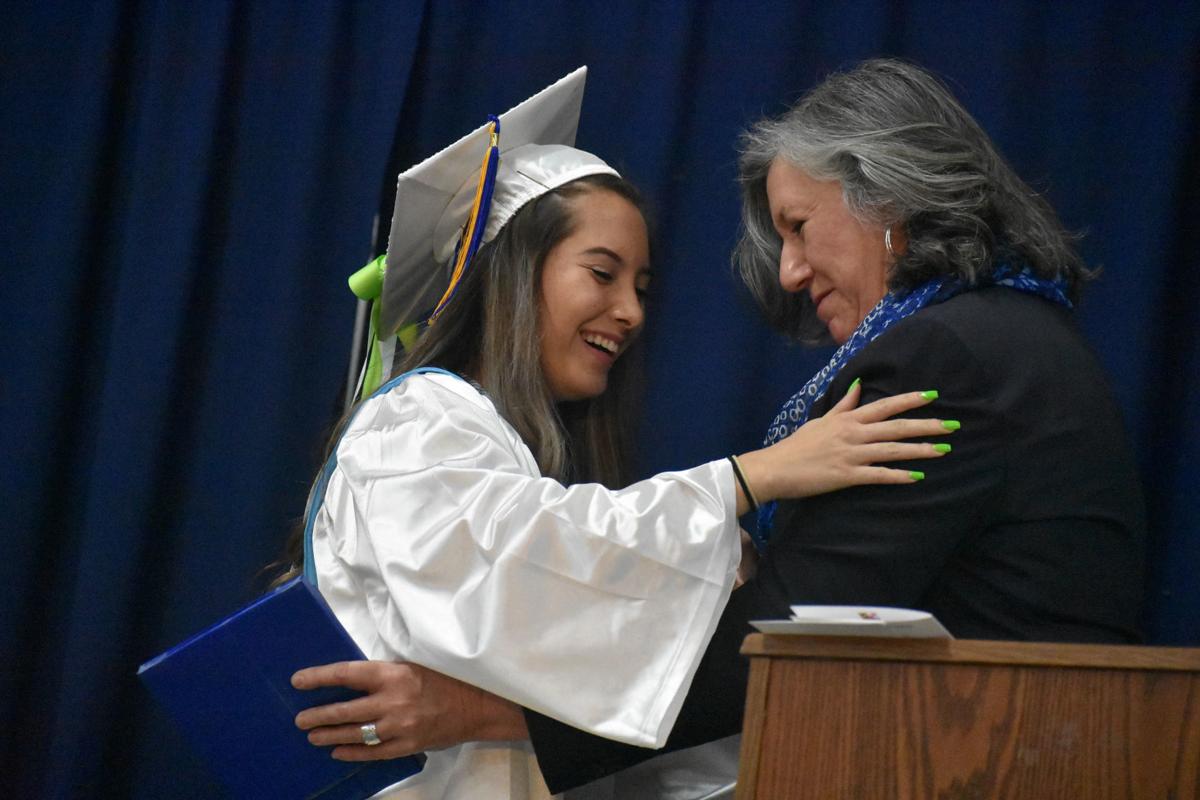 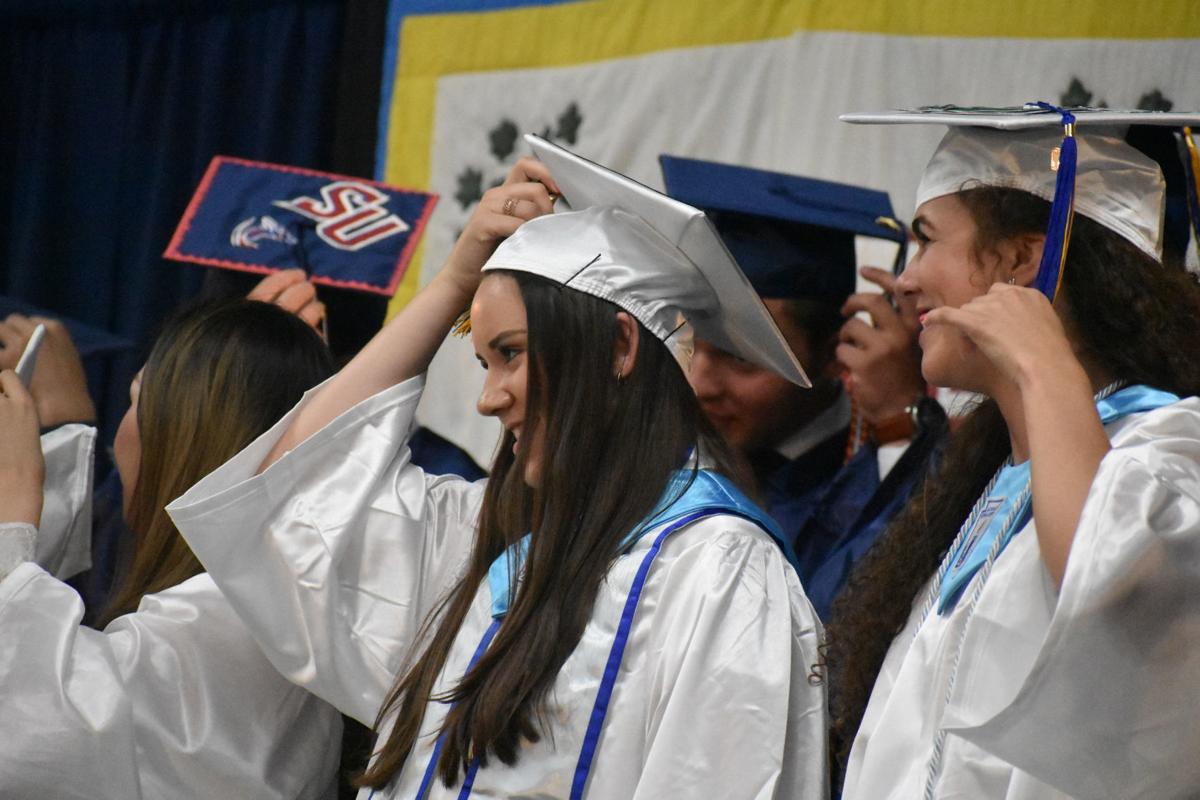 Calverton seniors Keira Shoup, left, and Ryleigh Weber move their tassles to the left side to make their graduation official during Saturday’s commencement exercises. 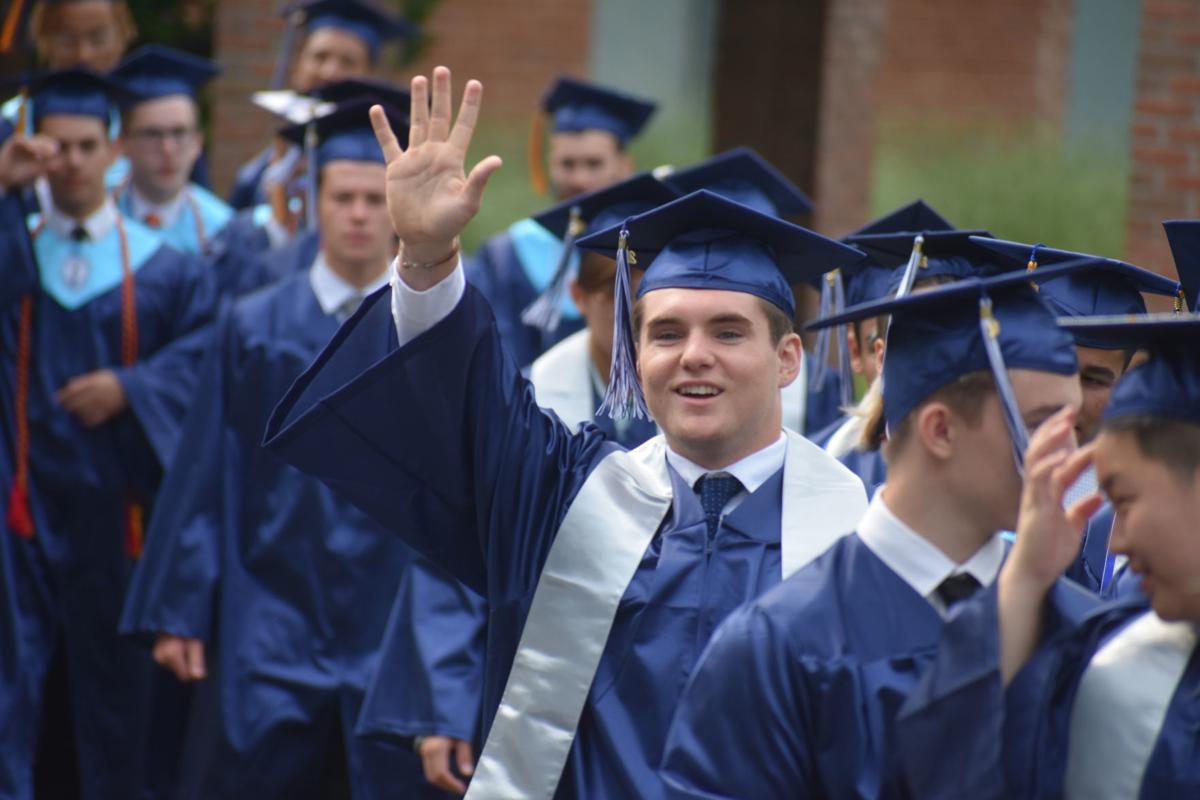 Calverton’s Cole Manos waves to the crowd during the seniors’ traditional walk from Founder’s Hall to the gymnasium. 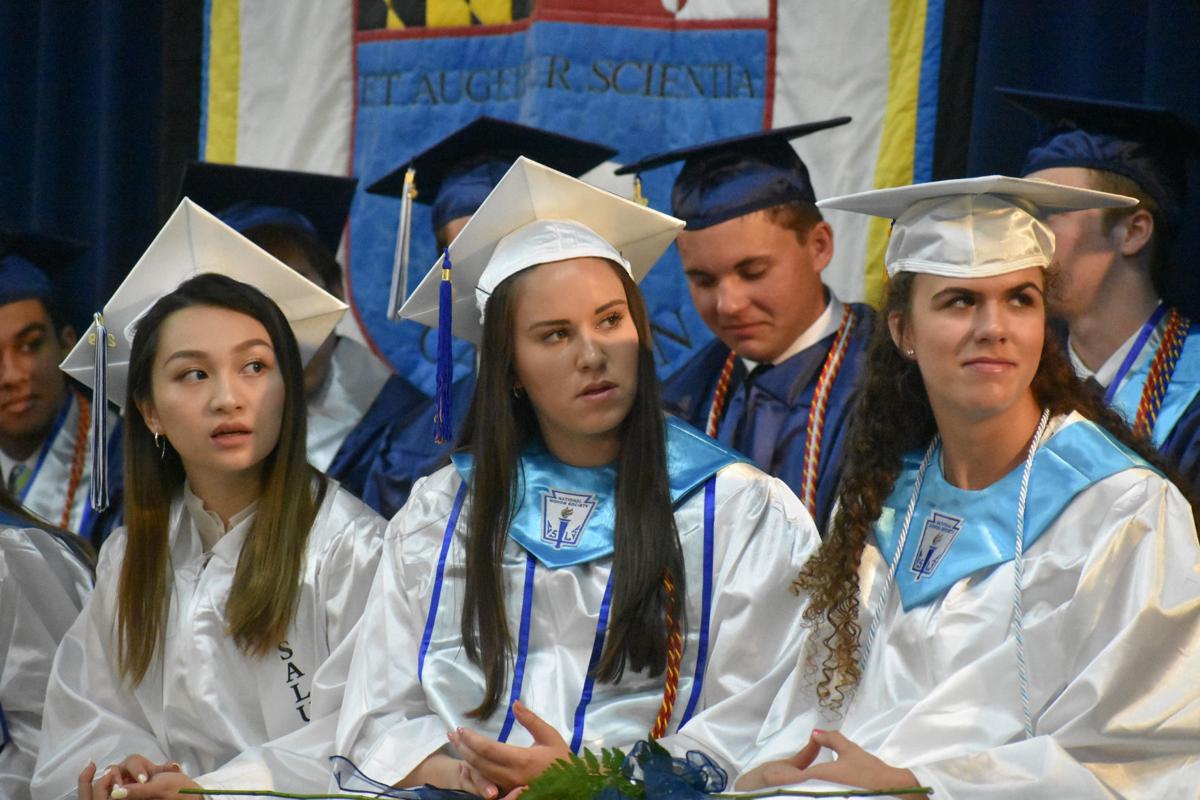 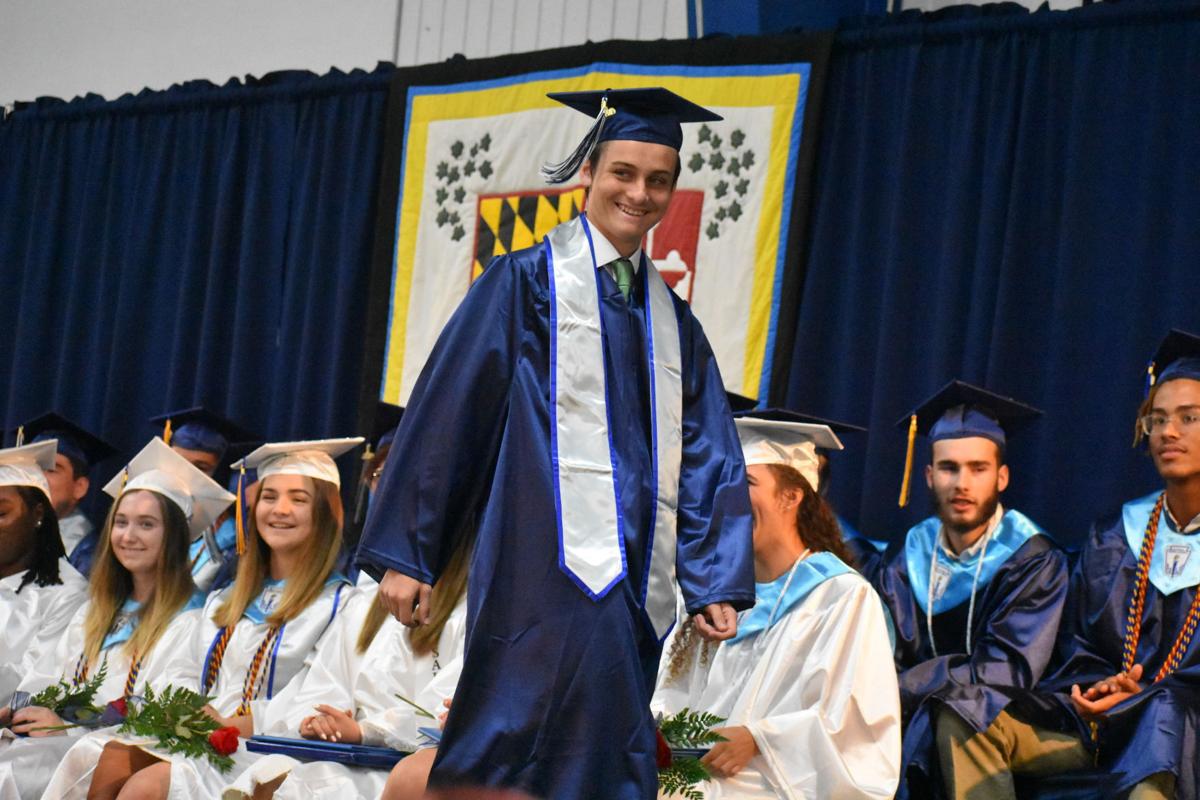 The Calverton School senior Henry Griffin walks across the stage to accept his diploma on Saturday.

Graduate Mary Atkisson covers her face as her parents Mark and Kathy hold up an oversized photo of her head during Saturday’s commencement exercises.

Calverton seniors Keira Shoup, left, and Ryleigh Weber move their tassles to the left side to make their graduation official during Saturday’s commencement exercises.

Calverton’s Cole Manos waves to the crowd during the seniors’ traditional walk from Founder’s Hall to the gymnasium.

The Calverton School senior Henry Griffin walks across the stage to accept his diploma on Saturday.

Class valedictorian Natalie Au told her classmates she hated to say goodbye to them, and The Calverton School most likely felt the same way when it held its 47th annual commencement at the school on Saturday.

Calverton graduated 37 seniors this year in a ceremony that lasted more than two hours.

“It’s exciting. I had a ton of family and friends and just the support I had felt great,” said senior Daniel Jones, who lives in Port Republic and plans to study computer science at the College of Southern Maryland. Studying here “was a lifetime of memories and hardships and to overcome everything feels great. Today means everything to me.”

“It’s bittersweet,” said Madeline Carrino of Benedict, who will attend the College of Charleston and is leaning toward majoring in the STEM field. “I’m sad I have to leave this place because it really feels like home, but I’m excited for what comes next.”

The graduates, who received 164 college acceptance letters and more than $2.3 million in scholarship money, walked in unison from Founder’s Hall to Leitch Memorial Gymnasium.

Calverton board of trustees president Arpana Shah told the graduates that graduating is “the end of one task, the beginning of another. Realize that the world awaits you and that you have the ability to write, and rewrite your futures.”

The graduates will attend colleges and universities in 13 states, while Benjamin Weimer will study at Karlsruhe Institute of Technology in Germany, one of the top 10 engineering and natural sciences schools in Europe.

Senior Mary Atkisson told her fellow classmates that “to remember what led us to this moment, both the successes and the failures. We’ve supported each other and we’ve lifted each other up” and to realize the importance of an open mind.”

Combined, the graduates scored more than 200 points over the national average on their SATs.

“At our age we want to be independent, and it’s easy to grow apart from our parents,” said Au Ling, whose parents flew in from China. “And our teachers have consistently been so patient with us. They believed in us even when we lost faith in ourselves under stress. Without [them], we wouldn’t be up here today.”

Ling, who was also awarded The Calverton Cup — the school’s highest honor — later turned toward her 36 fellow seniors and said her goodbyes.

“Seniors, as our high school lives draw to an end I thank you for being on this journey. We have suffered through … senioritis together and created memories that will last a lifetime. I cannot imagine any of these four years without any of you, and I hate to say goodbye, but I have to.”

Each graduating student was called toward the front of the stage where a teacher announced them and also gave each a book.

Teacher David Waldspurger donned an aluminum foil hat as he spoke about James Anderson, and later gave a bottle of hot sauce to Joseph Lare while calling him “the bomb.”

After the ceremony, the graduates gathered in the courtyard for a reception, and later partook in the ceremonial tossing of the mortarboards into the sky. Prince Frederick’s Keira Shoup will attend Pennsylvania’s Dickinson College, where she will study neuroscience and play women’s soccer.

“I’ve been here since pre-K, so it feels like my home away from home,” said Shoup, who added her favorite memory was participating in a “Survivor”-style obstacle course in grade 4. “I’ve almost been here more than I’ve been in my real home. Everyone’s been so nice.”

“It’s crazy; today was a beautiful ceremony,” said Bradley Holt of Deale who, and will play lacrosse at Shenandoah University in Virginia. “To graduate is a big thing for me. When I first started [going to Calverton] it was just like I imagined going to school.