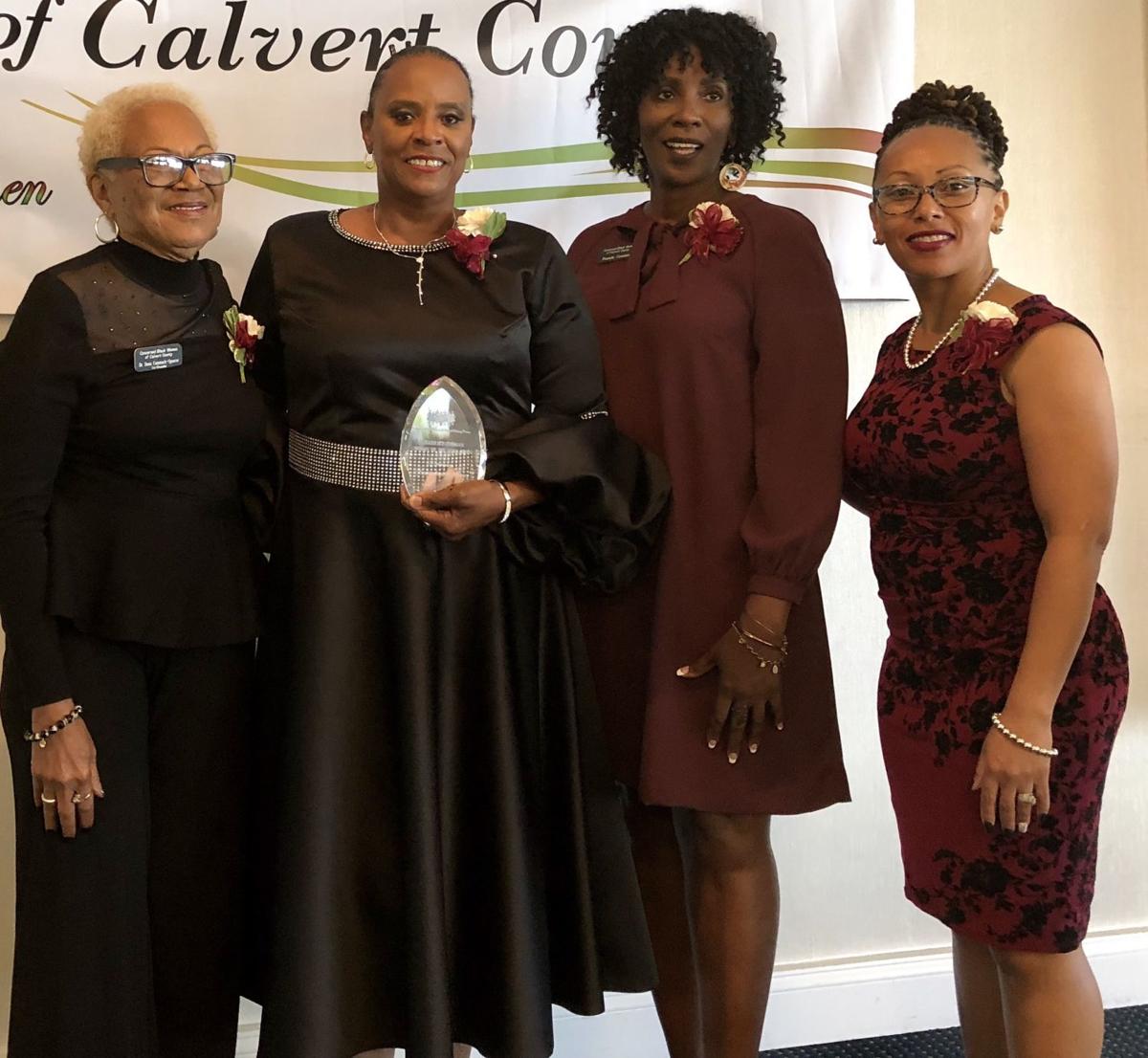 Connie Steward, second from left, receives the Concerned Black Women of Calvert County Harriet Tubman Woman of the Year Award for showcasing her bravery and strength as she battles breast cancer, while also assisting others with the same fight. Flanking her at Saturday’s annual Salute to Excellence event are CBW co-founder Doris Cammack-Spencer, left, President Pamela Cousins and Vice President Inez Claggett. 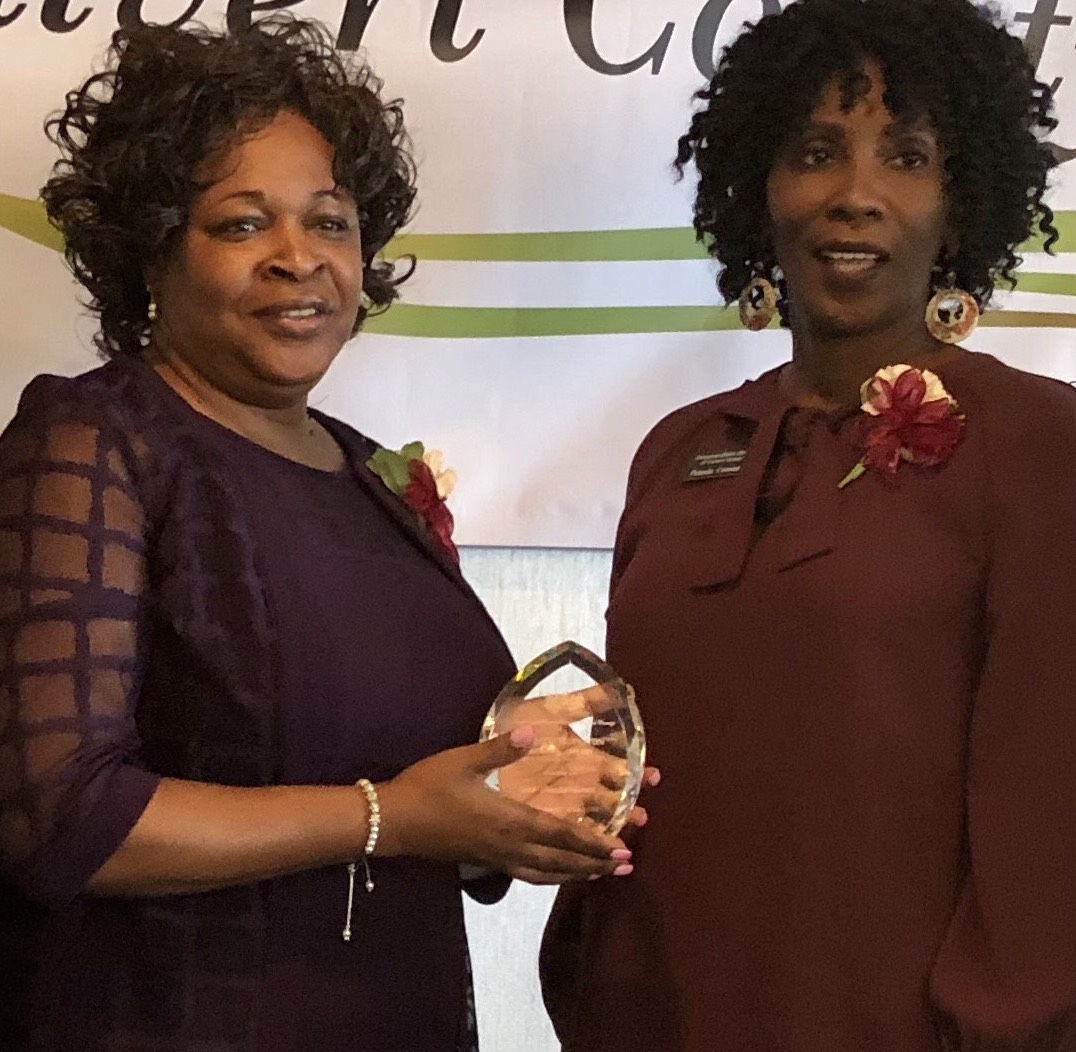 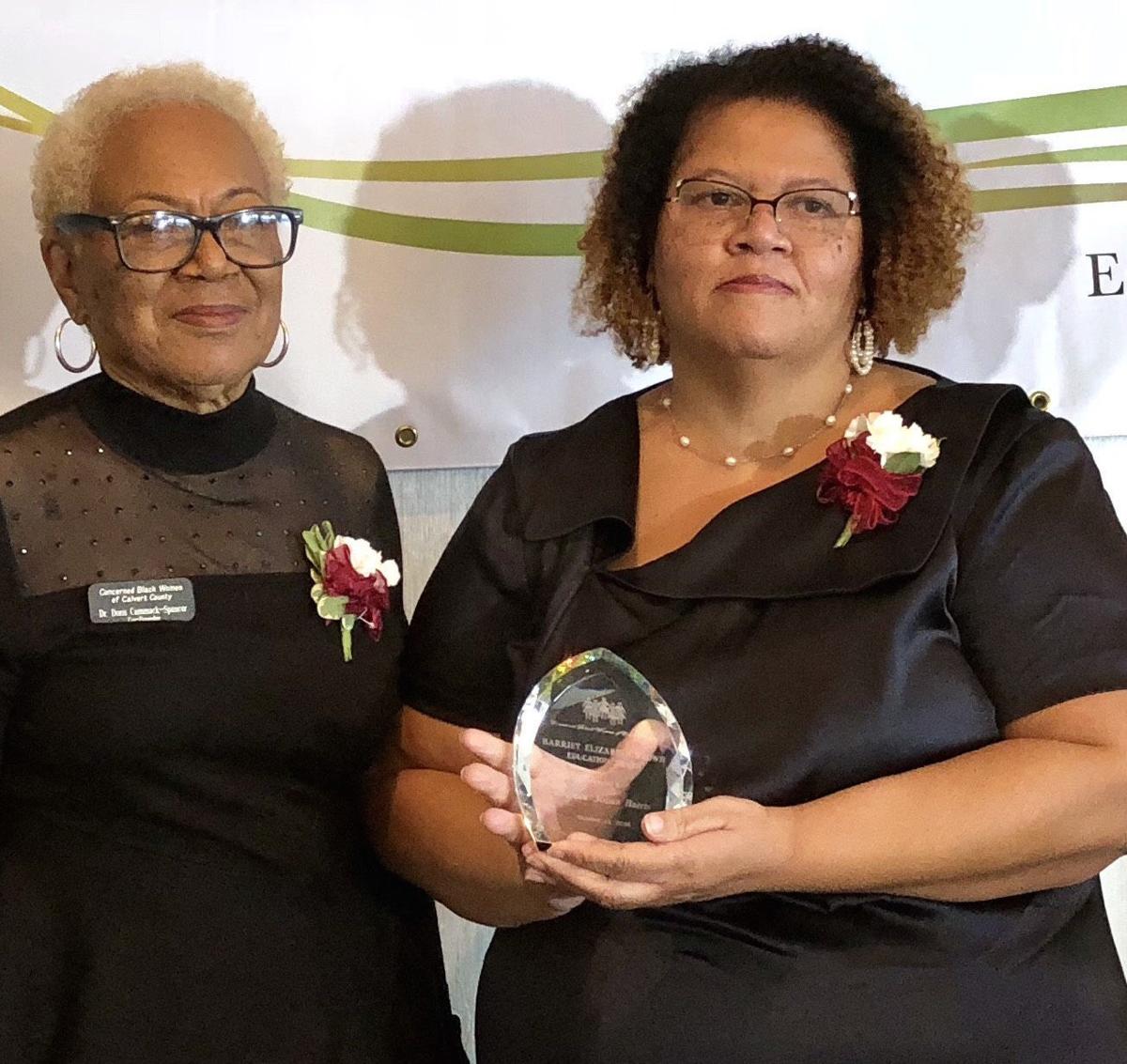 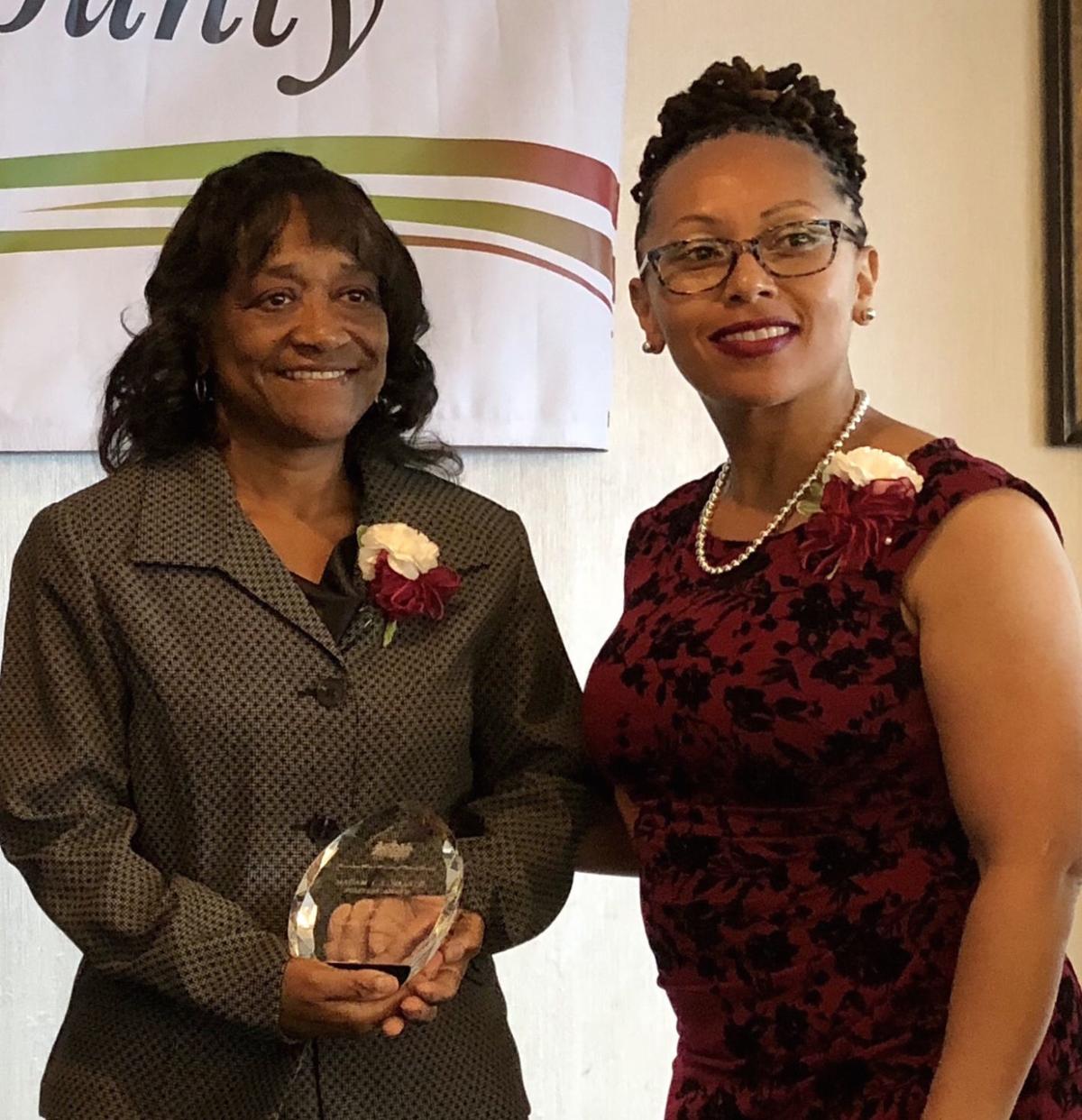 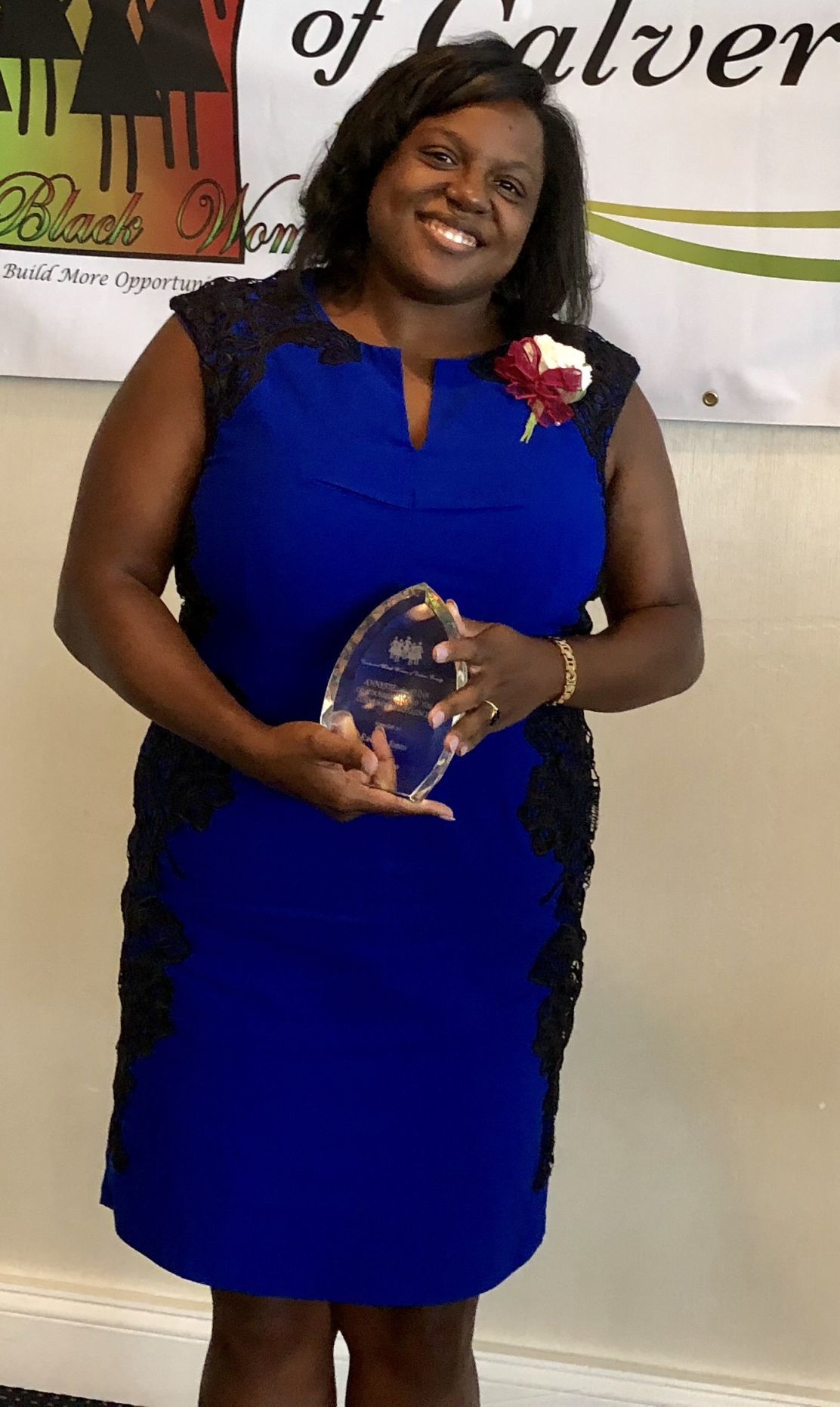 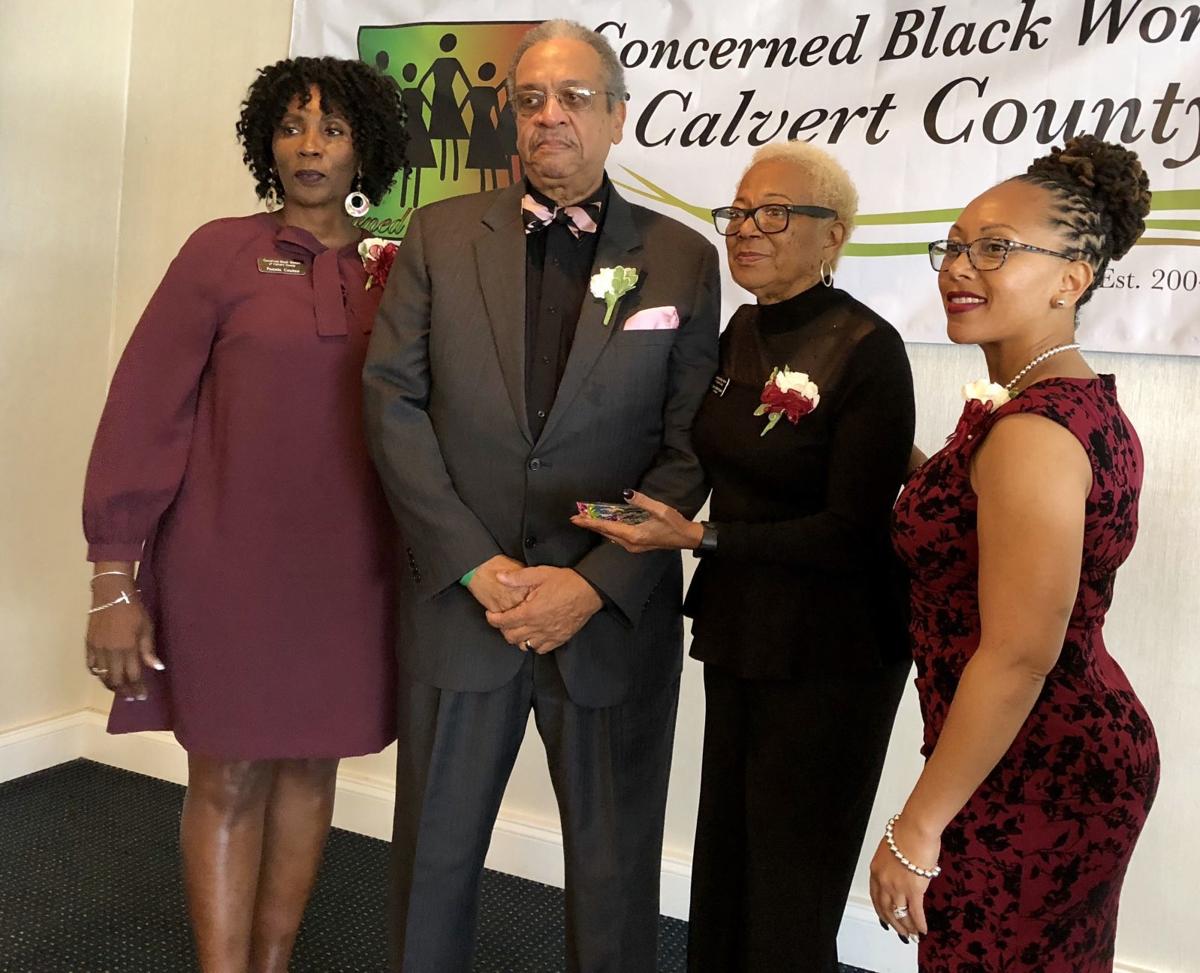 Connie Steward, second from left, receives the Concerned Black Women of Calvert County Harriet Tubman Woman of the Year Award for showcasing her bravery and strength as she battles breast cancer, while also assisting others with the same fight. Flanking her at Saturday’s annual Salute to Excellence event are CBW co-founder Doris Cammack-Spencer, left, President Pamela Cousins and Vice President Inez Claggett.

Elected officials and community members joined the Concerned Black Women of Calvert County at the Rod ‘N’ Reel Restaurant on Saturday for the 11th annual Salute to Excellence Awards, where six women and one man were honored for excelling and giving back to their community.

Pamela Cousins, president of the Concerned Black Women of Calvert County, served as this year’s emcee for the event. She described how CBW is about empowering others in the community, and spoke strongly about how the women represent the community.

“These ladies are pioneers, leaders, role models and influential ladies who serve Calvert County today,” said Cousins, who is also running unopposed to retain her county school board seat.

This year, the amount rose to $76,000 in scholarship money given away to 49 high school students in Calvert, all thanks to the opportunities Concerned Black Women gives to youth in the local community.

Following lunch, awards were presented to the seven people recognized for their efforts. Along with their awards, each awardee was presented citations from their congressional, Senate and state elected representatives. Each recipient also had a pre-recorded video played before the crowd, where each awardee demonstrated their love and passion to helping others in the community.

The Annette J. Funn Co-Founder Award for Community Excellence was awarded to Rachel Jones for her work as a field representative for the U.S. Senate, where she helps communicate between the community in Southern Maryland and federal representatives. Jones has traveled to Guatemala, Cuba, Dominican Republic and Puerto Rico, where she has helped feed hundreds of people and provide eye care and sandals to those less fortunate.

“I don’t serve my community for accolades, but it’s an honor to be awarded,” Jones said in her video.

The Dr. Doris Cammack-Spencer Co-Founder Award for Community Excellence was presented to Malcolm Funn for the community service he has participated in to help young students excel and keep them involved and productive in what they choose to do.

One quote from the program spoke of his passion, “that he can bridge the gap between races and gap between generations so that all can excel and be productive citizens.”

The Madam C.J. Walker Business Award was given to Natalie Holland for helping provide services to children ages 6 weeks to 12 years old. In 1991, Holland opened Holland’s Family Day Care, where for over 27 years, Holland took care of many children, giving those children the opportunity for nurture and to grow into successful young men and women.

In 1997, Harris was promoted to early childhood supervisor for Calvert County Public Schools. In this position, Harris played a role in collaborating with Head Start and HIPPY/Healthy Families programs that support school readiness, while also writing a grant that established Calvert County’s Judy Center at Patuxent Elementary.

Harris taught kindergarten and first and second grades at Mt. Harmony and Plum Point elementary schools before retiring in 2008. She now serves on the board of directors for United Way of Calvert and the Calvert County Family Network.

Lisa Height-Gross was honored with the Myrtle M. Patten Health Award. The program states that for Gross, “community is everything,” before continuing, “Her passion for serving others is only met for her drive to grow, both personally and professionally.”

Nine years ago, Gross founded the Loving Care Senior Services, which addresses the needs currently facing elderly patients in the community. For almost 10 years now, Loving Care has spread all across Southern Maryland, serving to give elderly patients the love and guidance that they need.

Currently with a grade-point average of 4.2, Frye is a member of the National Honor Society, Rho Kappa, and is secretary of Mu Alpha Theta. She is also the president of the Young Democrats, where she increased membership in the club from five to 41 people, while also planning an event at the end of this year that raised over $300 in donations for Project ECHO.

Additionally, she is a student representative for Calvert Alliance Against Substance Abuse at her school, where she helps the CAASA board continue to find new ways to help Calvert County residents who are addicted to drugs and alcohol, according to the program.

Frye is fascinated by medical research and plans to major in biomedical engineering in the college she chooses to attend.

The Harriet Tubman Women of the Year Award was presented to Connie Steward. In 2006, just a few weeks before she was to renew her wedding vows, she was diagnosed with stage 3 breast cancer. This was the same illness that attacked her father, aunts and sister. Steward used her faith in God and strength to fight the battle against breast cancer. With over 30 chemotherapy treatments and over 30 radiation treatments, she continues to fight against breast cancer.

Even in spite of her battle, she founded and opened up 3 Bea’s Assisted Living in Calvert County. The program states that Steward “considers it an honor to aid in the care of those who face difficulty caring for themselves.”