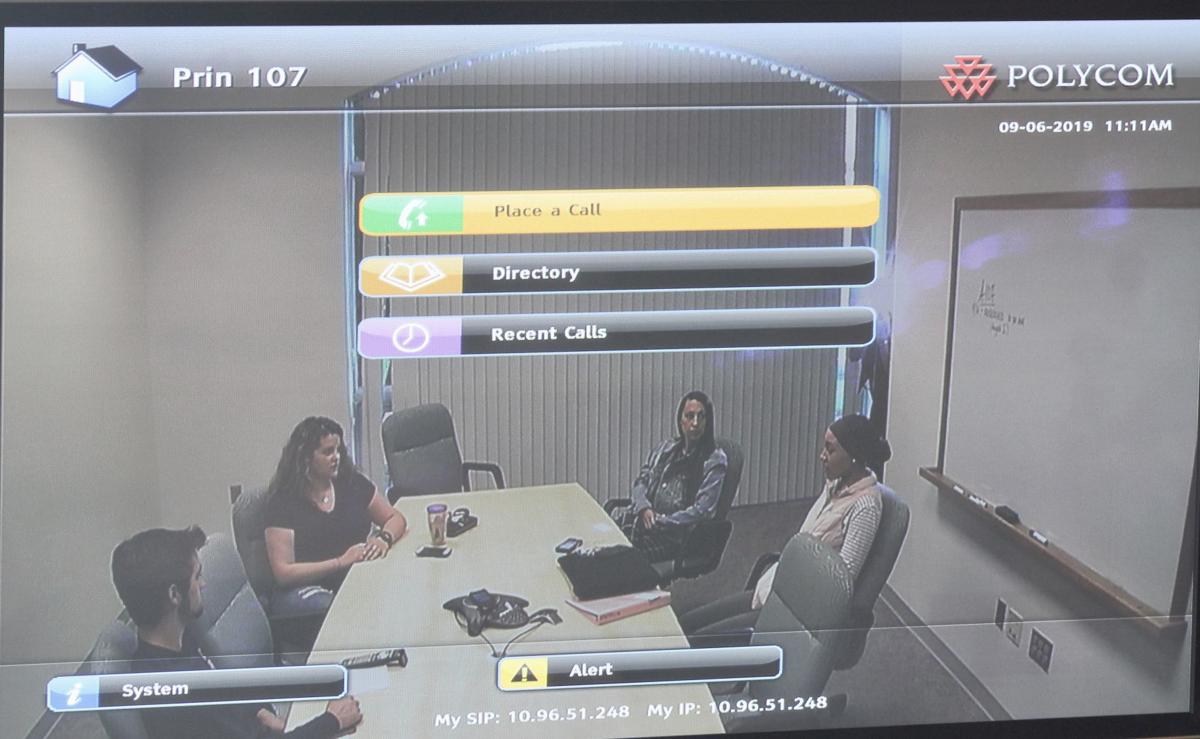 Telecommunications device at College of Southern Maryland captures video of students' discussion of the privacy tradeoffs in the aftermath of 9/11. 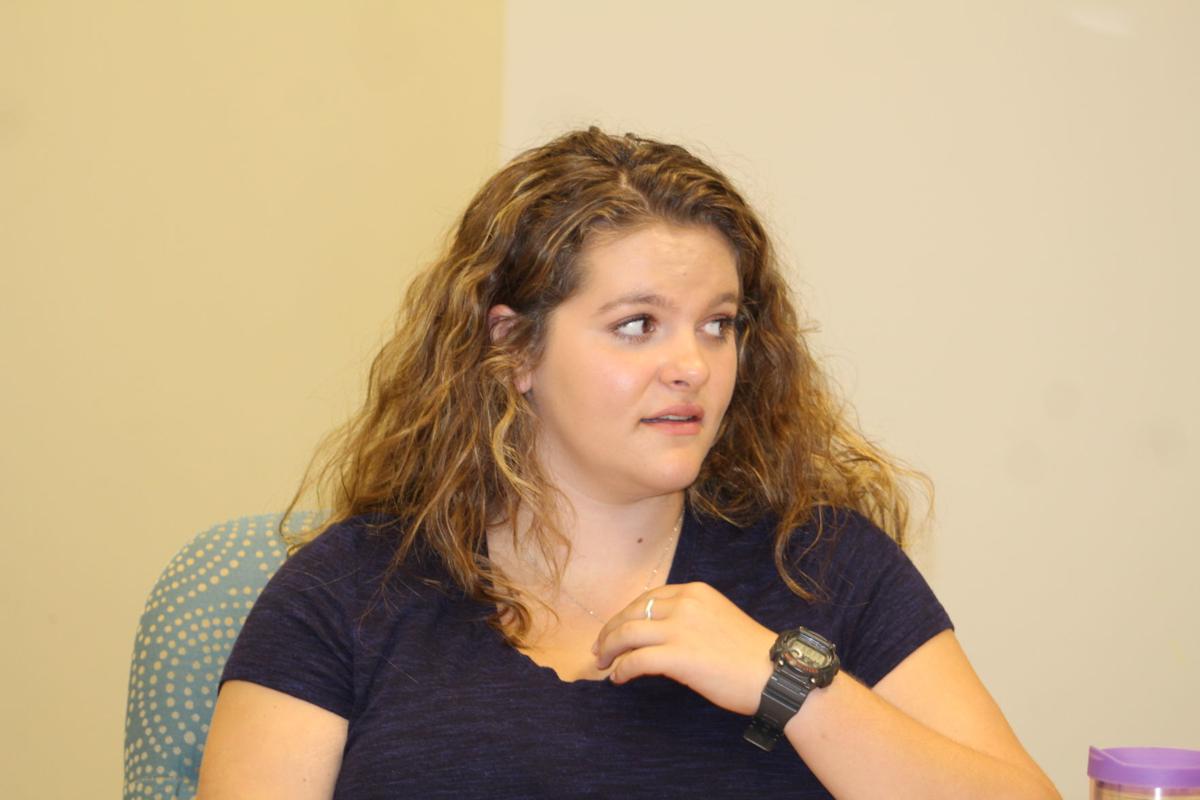 Maura Baker, a freshman criminal justice major at the College of Southern Maryland in Prince Frederick, shares her thoughts on increased security in the aftermath of Sept. 11, 2001. 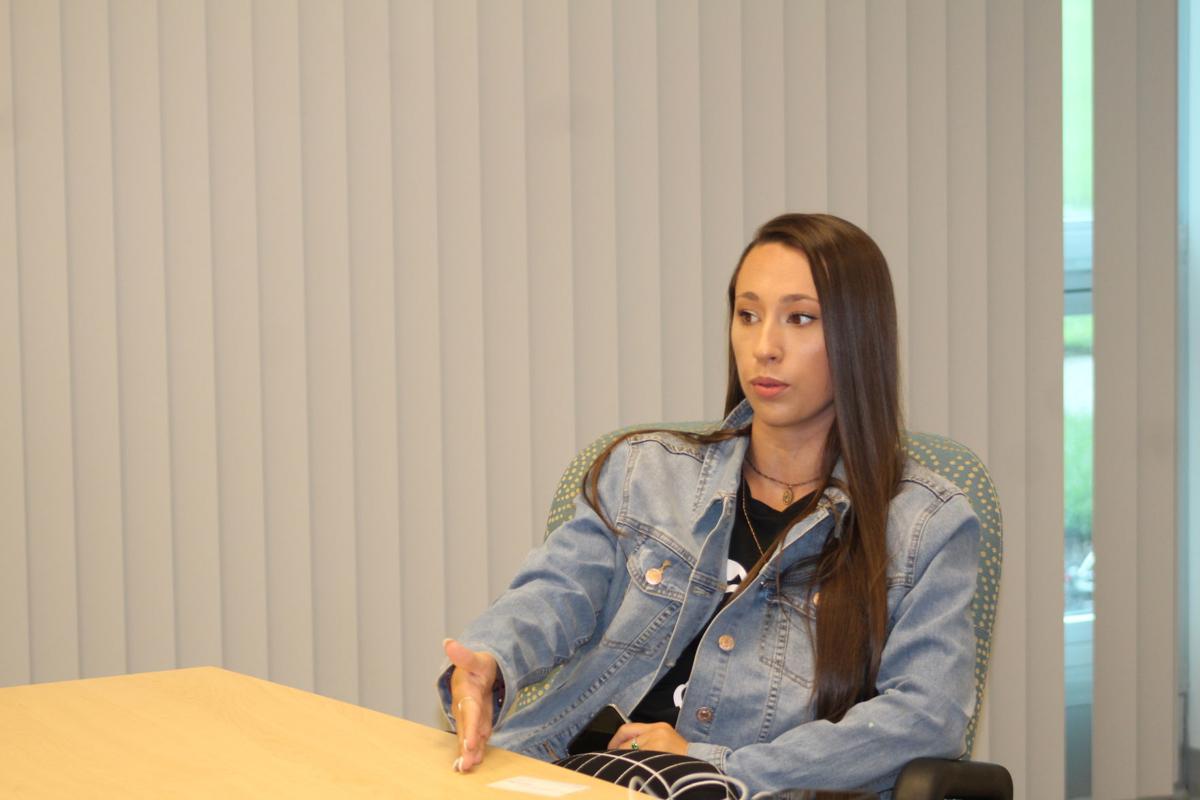 Brenna Vilkoski, a freshman majoring in social science and arts and humanities at the College of Southern Maryland, said the increased surveillance, after 9/11, is uncomfortable but is necessary. 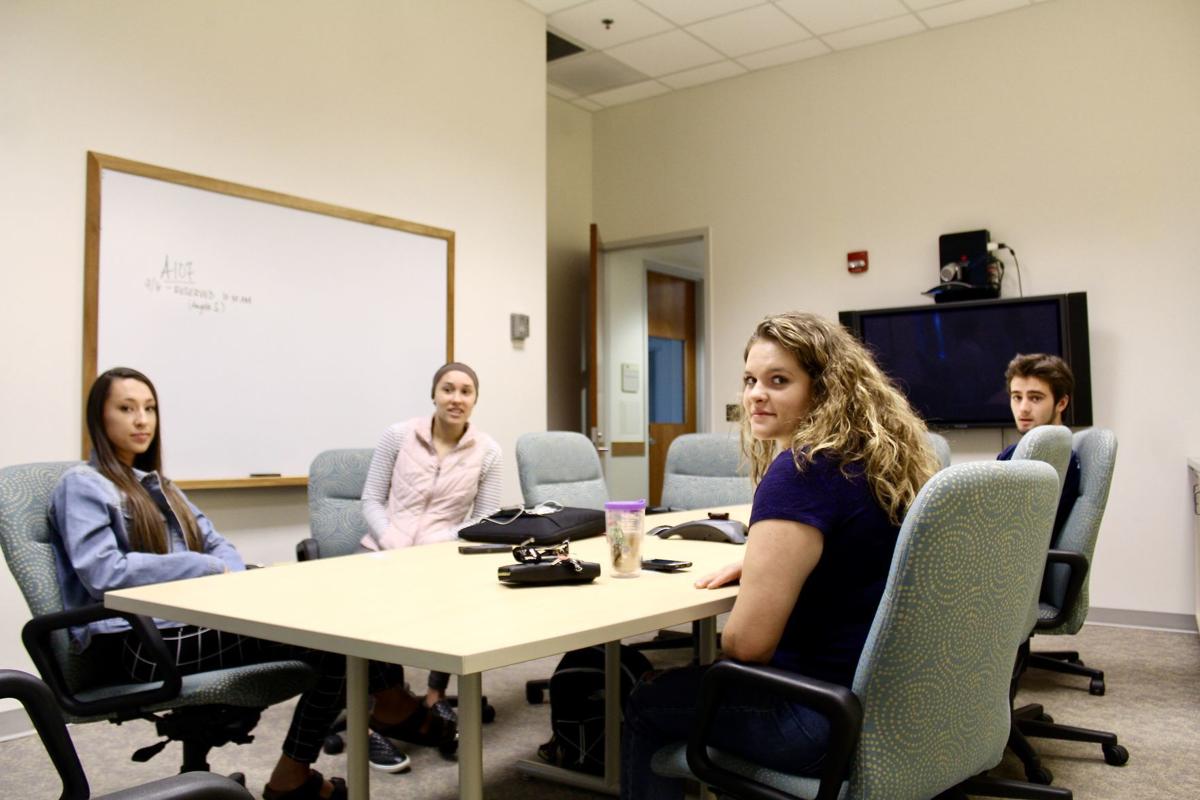 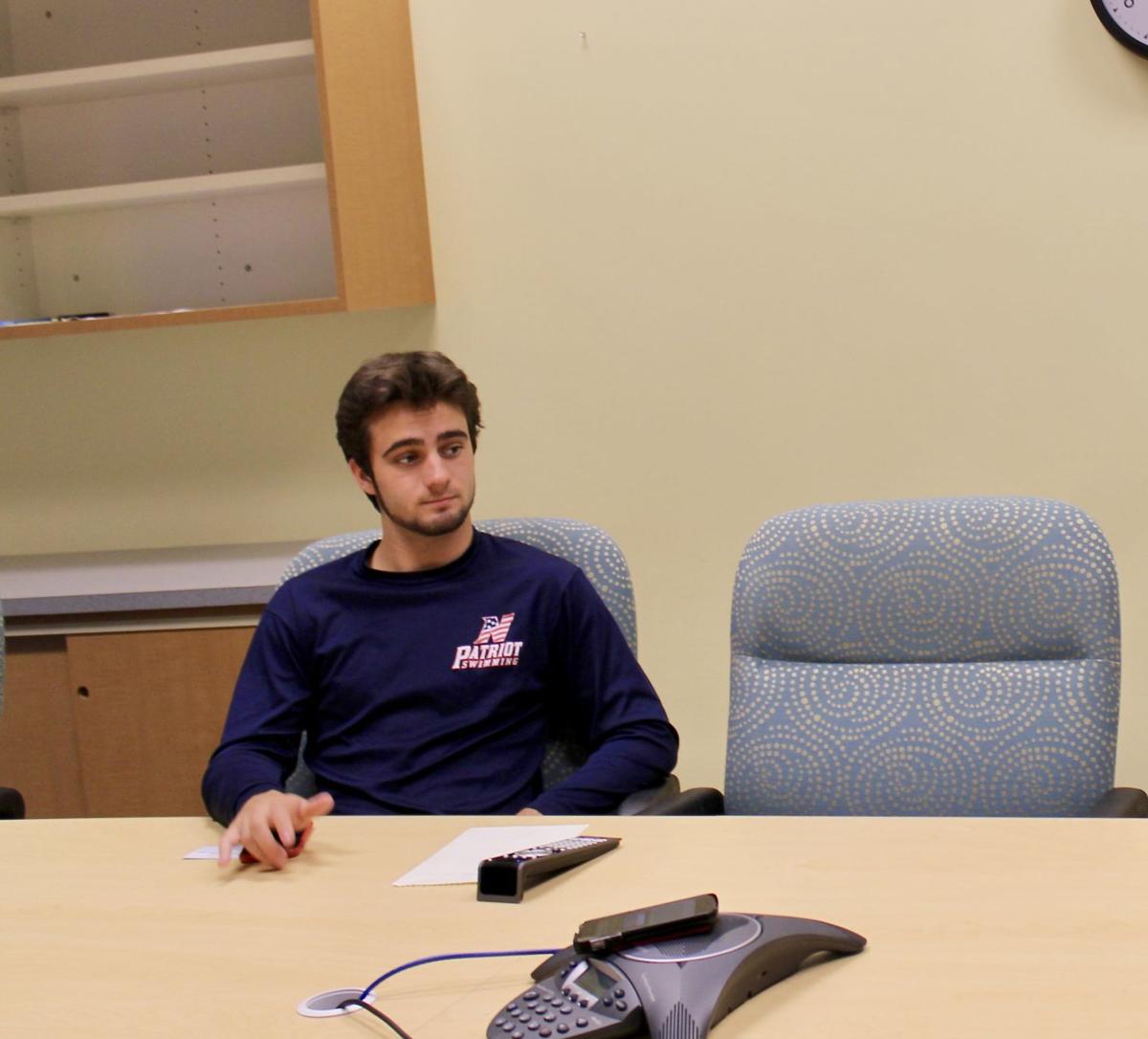 College of Southern Maryland’s Petey Ervin, a freshman criminal justice major, participates in a discussion on the 18th anniversary of 9/11.

Telecommunications device at College of Southern Maryland captures video of students' discussion of the privacy tradeoffs in the aftermath of 9/11.

Maura Baker, a freshman criminal justice major at the College of Southern Maryland in Prince Frederick, shares her thoughts on increased security in the aftermath of Sept. 11, 2001.

Brenna Vilkoski, a freshman majoring in social science and arts and humanities at the College of Southern Maryland, said the increased surveillance, after 9/11, is uncomfortable but is necessary.

College of Southern Maryland’s Petey Ervin, a freshman criminal justice major, participates in a discussion on the 18th anniversary of 9/11.

“We were such a carefree country, and we felt safe everywhere we went. There was no need for security, but when 9/11 occurred everything changed,” said Brenna Vilkoski, a freshman majoring in social science and arts and humanities at the College of Southern Maryland in Prince Frederick.

Vilkoski was just 16 months old when foreign hijackers crashed four passenger airplanes into the Twin Towers in New York, the Pentagon and a field in Pennsylvania on Sept. 11, 2001. The coordinated attacks killed nearly 3,000 people.

“Our parents changed the way that they raised us. You have to watch your kids a lot more. You have to teach them the security skills,” Vilkoski said during a discussion on Friday regarding the 18th anniversary of 9/11.

“It changed our perspective. We’re not invincible. We are a country that is vulnerable, and bad things can happen to us,” said Petey Ervin, a CSM freshman criminal justice major, who was 9 months old on 9/11.

“We felt safe and untouchable before, but now we’re more aware of what’s going on around us,” said Maura Baker, also a freshman criminal justice major at CSM.

Baker, who was 2½ months old the day of the attacks, is a member of the Calvert County Sheriff’s Office Explorer Post 91. She plans to become an officer after graduation and then move into the county’s K-9 unit.

“We have to be more cautious of where we go. We have to look out for ourselves and each other now. It’s not like we can go out of the house and think “Oh! Nothing is going to happen to me,” said Destiny Johnson, a CSM sophomore majoring in criminal justice and general studies. “We have to be more observant.”

Johnson, who was 15 months old on 9/11, plans to transfer to Towson University after earning her associate’s degree and aspires to work for the Federal Bureau of Investigation.

On Tuesday, Sept. 11, 2001, there were many downed power lines, jammed phone lines and cellphone networks, making it difficult for citizens and first responders to communicate.

For students who have grown up in the digital age whose mobile devices have become appendages, not having the ability to communicate was unimaginable.

“I’d be scared. I’d want to contact my loved ones,” Ervin said, noting he would have to rely on faith that they were OK.

“It would just terrify me,” Baker said of not being able to talk to family during a crisis of 9/11’s scale.

“I would probably bust out in tears,” said Johnson, who added she would gain control. “You have to learn to survive in that moment to protect yourself and others around you.”

While none of the students can recall the attacks, they do recall their families’ recollection of how things used to be and how difficult it was to adjust to the change after 9/11.

The most obvious change was increased security at U.S. airports, as the newly created Transportation Security Administration took over what had once been individually handled security operations at airports nationwide.

Baker said she heard stories from her parents and other adults of not having security at airports, or not needing a passport to go into Canada.

“Now when you go to airports, you have to go through security, and there are limits on what you can take,” Baker said. “If you go out of the country, you have to have a passport. You can’t just show your driver’s license.”

Baker said she traveled to London for an Explorers’ trip with the sheriff’s office this summer and was subjected to a random search of her bags.

“Man, that would be so nice not to have to go through security or watch our backs everywhere,” Baker added. “Getting stopped is normal for us, but it’s such a hassle.”

Johnson went to Paris, Scotland and London last summer for an academic trip.

“Getting on the first plane was a hassle. I had to throw away some stuff,” Johnson said, crediting the increase scrutiny of her luggage to 9/11. “It was just a hot mess.”

“You hear people complain about the checkpoints, but when you think about it is really necessary,” Ervin said. “We need more security.”

After the 9/11 attacks, Americans privacy rights were weakened by policies and amendments to laws such as the Patriot Act and the Foreign Intelligence Act, which sought to acquire intelligence on possible terrorist activity through increased surveillance, wiretapping and electronic searches domestically and internationally. Additionally, technology advances enabled constant surveillance of citizens through license plate readers, video cameras and closed-circuit television.

“Even though it is uncomfortable to know that we are being recorded everywhere we go, I think it is definitely necessary because without all this security and footage we wouldn’t be able to find out the things that we do and have the information we need,” Vilkoski said.

While Gen X-ers, Baby Boomers and Traditionalists have had to get use to the new normal of a heightened sense of security and the invasion of privacy in the aftermath of 9/11, these post-Millennials agreed that the trade-offs are worthwhile to ensure safety and that it is their norm. However, in a perfect world what they would like to see in terms of security in Calvert and across the country is some forward movement on classroom safety.

“There’s been a lot more school shootings. There have been some before, but you didn’t hear about them until the last couple of years. It’s been crazy,” said Ervin, who graduated from Huntingtown. “It happens at least once a month.”

“I think our country focuses more on what comes into our country rather than what’s happening in our own country,” Vilkoski said, referring to the immigration debate.

Baker recalled the Great Mills High School shooting in March 2018, and that Calvert County schools were on lockdown.

“That was 30 minutes away from us, but do we focus on it? No,” said Baker, who graduated from Huntingtown High School.

Baker said students were told they could talk to a counselor if they felt scared, but they “were never pulled in as a group, or as a school to come together as a community to say “hey, we’re all here for each other.”

Vilkoski, who attended Calvert, and Johnson, who attended Northern, said their schools talked about the Great Mills shooting that day, but recall nothing afterward.

“The tri-county area is so small. You’re bound to know someone in that county,” Vilkoski said, suggesting that even though the shooting happened in St. Mary’s County grief counselors or group discussions in Calvert would have been helpful.

All four students recalled threats of violence at their own school that never materialized, unlike those that came to pass like the mass school shooting on Valentine’s Day 2018 in Parkland, Fla., where 17 students and faculty were killed by a gunman. It was one of 24 school shootings in 2018. In 2019, there have been more than 22 thus far.

“After a couple of the shootings, they finally realized this is really a problem — this is the new threat,” Ervin said, noting the appearance of school liaisons and resource officers and increased physical security measures in schools locally and nationwide.

Each generation is defined by major life experiences and events. For them, school shootings is theirs.