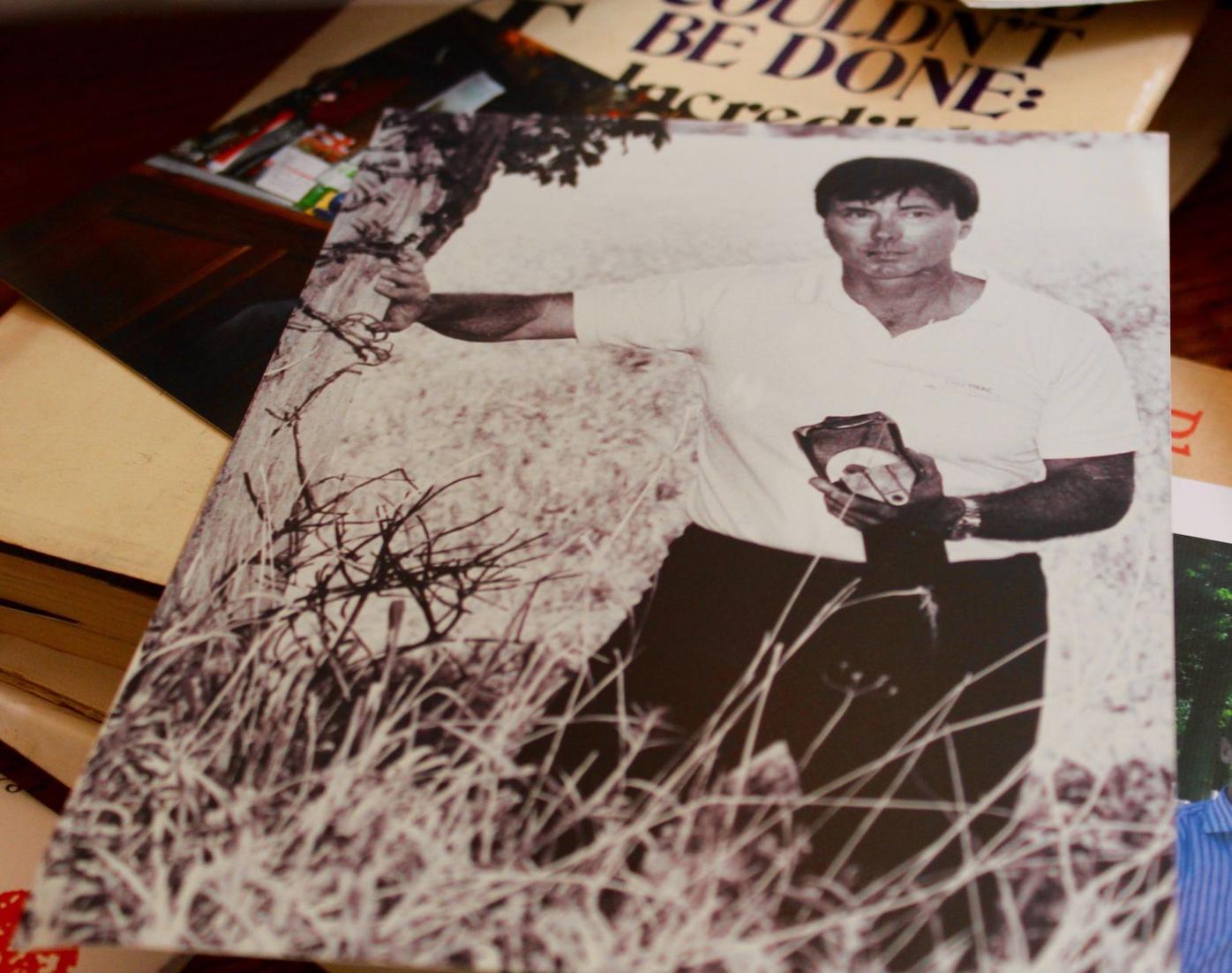 This 1992 photo shows Ken Underwood standing beside the only tree that remained after the plane crash that killed his father in a field in England in 1944. 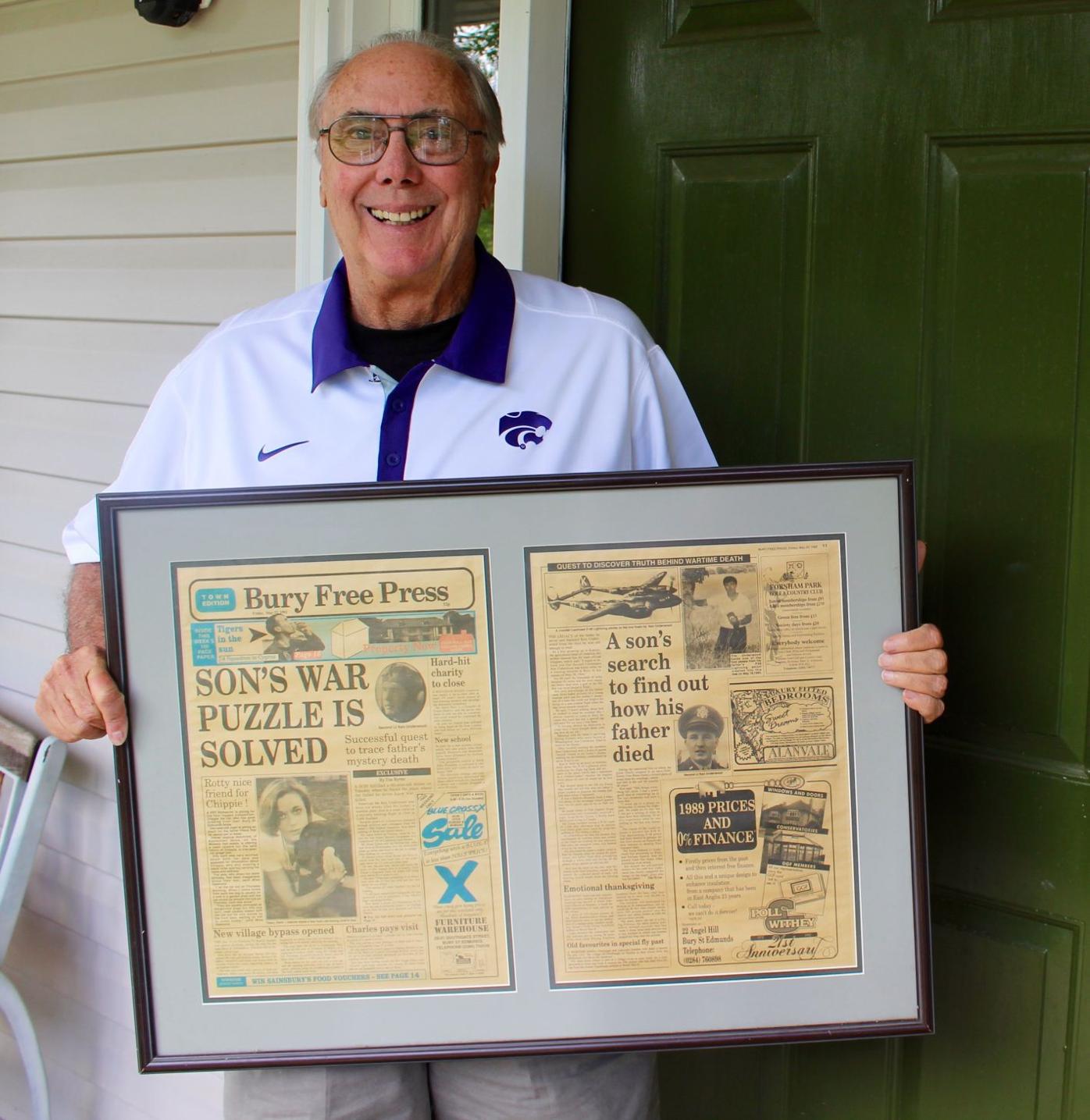 Ken Underwood holds the story the local newspaper ran when he first visited the site where his father died. 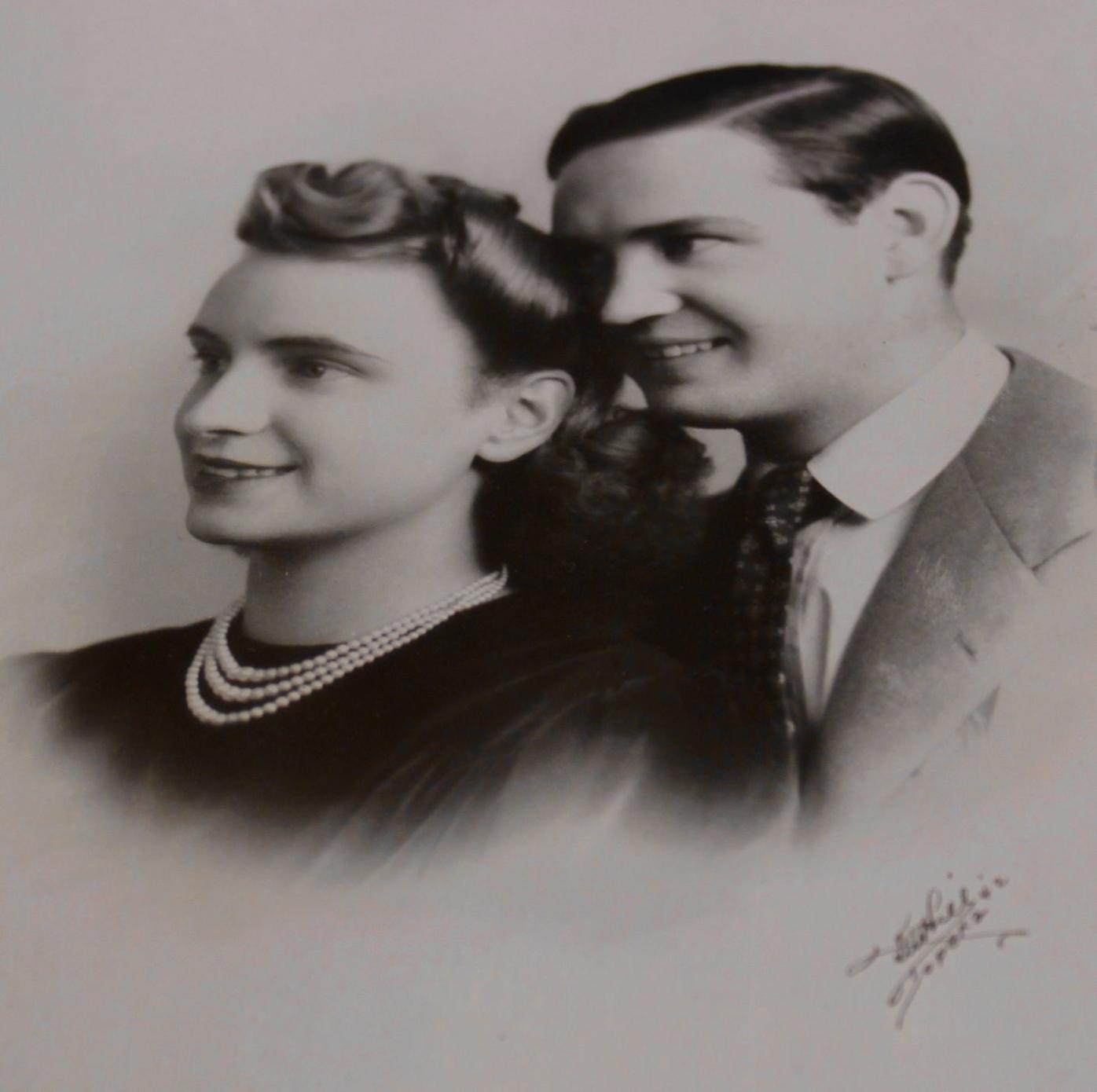 Kenneth Underwood was married to his wife, Alice, when he died in a plane crash during WWII. Alice was seven months pregnant with their son at the time.

This 1992 photo shows Ken Underwood standing beside the only tree that remained after the plane crash that killed his father in a field in England in 1944.

Ken Underwood holds the story the local newspaper ran when he first visited the site where his father died.

Kenneth Underwood was married to his wife, Alice, when he died in a plane crash during WWII. Alice was seven months pregnant with their son at the time.

Ken Underwood of Owings never met his father, but through a string of unlikely coincidences, he and his son have a connection with the late Kenneth Harry Underwood, after spending decades and traveling thousands of miles to piece together his story.

Kenneth Harry Underwood was determined to be a pilot. Right out of high school in Topeka, Kan., he wanted to be a war pilot, but his eyes weren’t good enough. His son said in a recent interview that he ate carrots to try and improve his eyesight and kept on applying. Persistence paid off, and he was accepted, although his son, Ken, said he thinks so many pilots were lost by that time, they needed more and eased up on the requirements.

Kenneth Harry Underwood died May 18, 1944, in a plane crash as an Army Air Corps pilot. His wife, Alice, was seven and a half months pregnant with their son, Ken. Kenneth wrote two letters to his wife the night before he was killed. When Alice got the telegram with the news that her husband was killed, she wasn’t surprised, because she had a dream the night before that the sky opened up and she saw her husband smiling. The telegram stated a letter would follow, but there was no letter, no flag, no funeral and no closure.

Alice never talked to her son about his father and she didn’t know anything about the circumstances surrounding her husband’s death other than it was an airplane crash in Bury St. Edmonds, England. But in 1985, she and her son attended a reunion of the 55th fighter group at the Air Force Academy. Ken Underwood walked around asking if anyone knew his father and got no leads, until someone overheard him talking about his father.

A “small fellow” told Ken Underwood, “I was your father’s crew chief.”

“I was laughing and crying at the same time. I had never heard someone talk about my father as a fighter pilot,” Ken said. During the reunion, he met two others who knew his father, including Col. Jack Jenkins. Kenneth Harry Underwood was Jenkins’ wingman. Jenkins told Ken that he looked like his father, which he had never heard before.

It didn’t end there. Alice told her son that Bert Shepard was her husband’s squadron mate. Shepard was a baseball player after the war. Ken didn’t know how to get in touch with him, but met him at an airshow in 1987 in California. Someone was flying a P-38 Lightning, which Kenneth Underwood flew in the war. Ken told the person sitting next to him about it. The man next to him also flew one. The two got talking, and it turned out the other man was Shepard. Shepard was shot down three days after Kenneth Underwood died, lost his leg and pitched for the Washington Senators after the war.

Shepard advised Ken to write to the Air Force for an accident report, which he received in 1988. The cause of the accident was blacked out, but in the report were pictures of the crash site.

“You could see the plane in a thousand pieces,” Ken said. The emergency landing was into a bunch of trees and all of the trees burned away, except for one.

Shepard also told Ken the plane crashed near where the 94th bomb group was stationed and told him to write to the group, as it published a newsletter. So he wrote, and in 1992, he received a letter from Brian Tyson in Canada. Tyson wrote that he would lie in the fields and watch the fights. As he was walking home one day, he saw a P-38 Lightning and the pilot ejected his canopy. He saw the plane go over the trees and smoke came up. Tyson got on a bicycle and rode over to the crash site. By the time he got there, the pilot was gone. Tyson just assumed he survived.

Ken said the incident Tyson saw had to have been his father because there were no other P-38 crashes in that area. Tyson also said his brother still had a piece of the airplane.

“The next thing I know, I’m on my way to England,” Ken said.

So he went to England in 1992 and got the plane piece. A local newspaper sent a reporter and photographer with him to the crash site. There, he met a farmer who owned the farmhouse on the crash site. The only tree that wasn’t burned because of the crash was still standing, decades later, with the bark burned off.

The farmer was there the day of the crash. Ken said the farmer told him they couldn’t help his father and ammunition and bombs were everywhere. The farmer had been looking in his fields for pieces of the crash for the last 48 years and couldn’t find anything, yet when Ken visited, as they were walking, they found a piece of the plane on the ground.

Ken went to England again in 1997, this time taking his 4-year-old and 2-year old with him. A TV station went along this time. He walked around and heard his name being called. The group waved for him to come to the tree. There, the farmer showed Underwood the remainder of his father’s flying boot, which had been lying on the ground even though the farmer continued to look for remnants of the crash in the five years since Ken had last visited.

The story lives on, through a plethora of memorabilia collected from Ken’s research about his father, and Ken’s son, Harryson, is in the U.S. Air Force, training at Vance Air Force Base. Harryson’s due date was April 16, the same day his grandfather died in the plane crash. Harryson graduated from Northern High School in 2011 and said there never really was a moment where he decided to join the Air Force.

“It’s what I wanted to do as long as I can remember,” he said, stating that his grandfather had the same drive to achieve his dream.

Harryson plans to wear the same wings his grandfather wore upon his graduation.