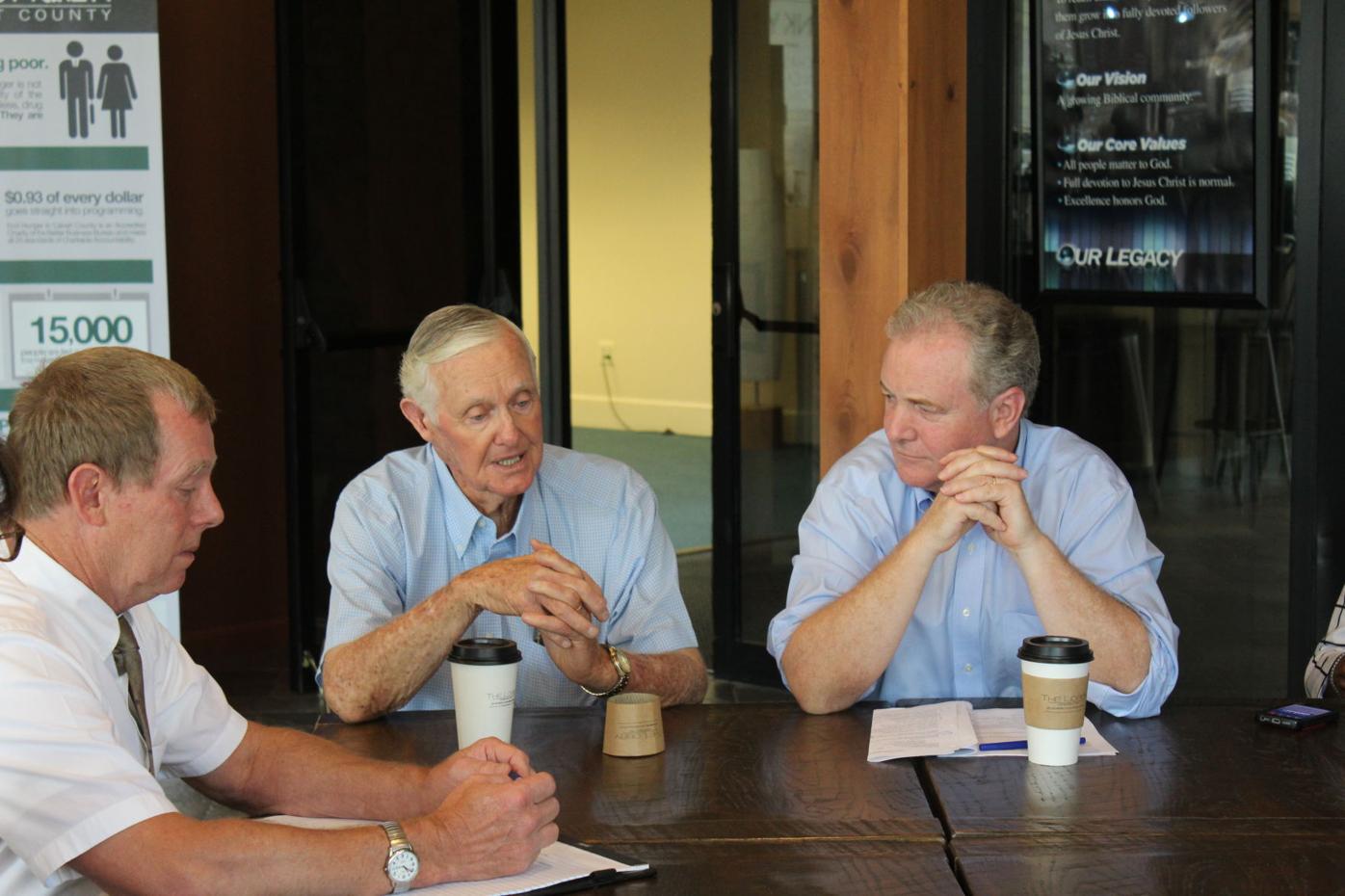 U.S. Senator Chris Van Hollen (D) , right, meets with the Calvert County farming community at Chesapeake Church in Huntingtown on Monday, July 3, to discuss the Farm Bill and other concerns. Hagner Mister, center, former Maryland secretary of agriculture and farmer, and Bill Clark, manager of the Calvert Soil Conservation District, were among the dozen farming professionals in attendance. 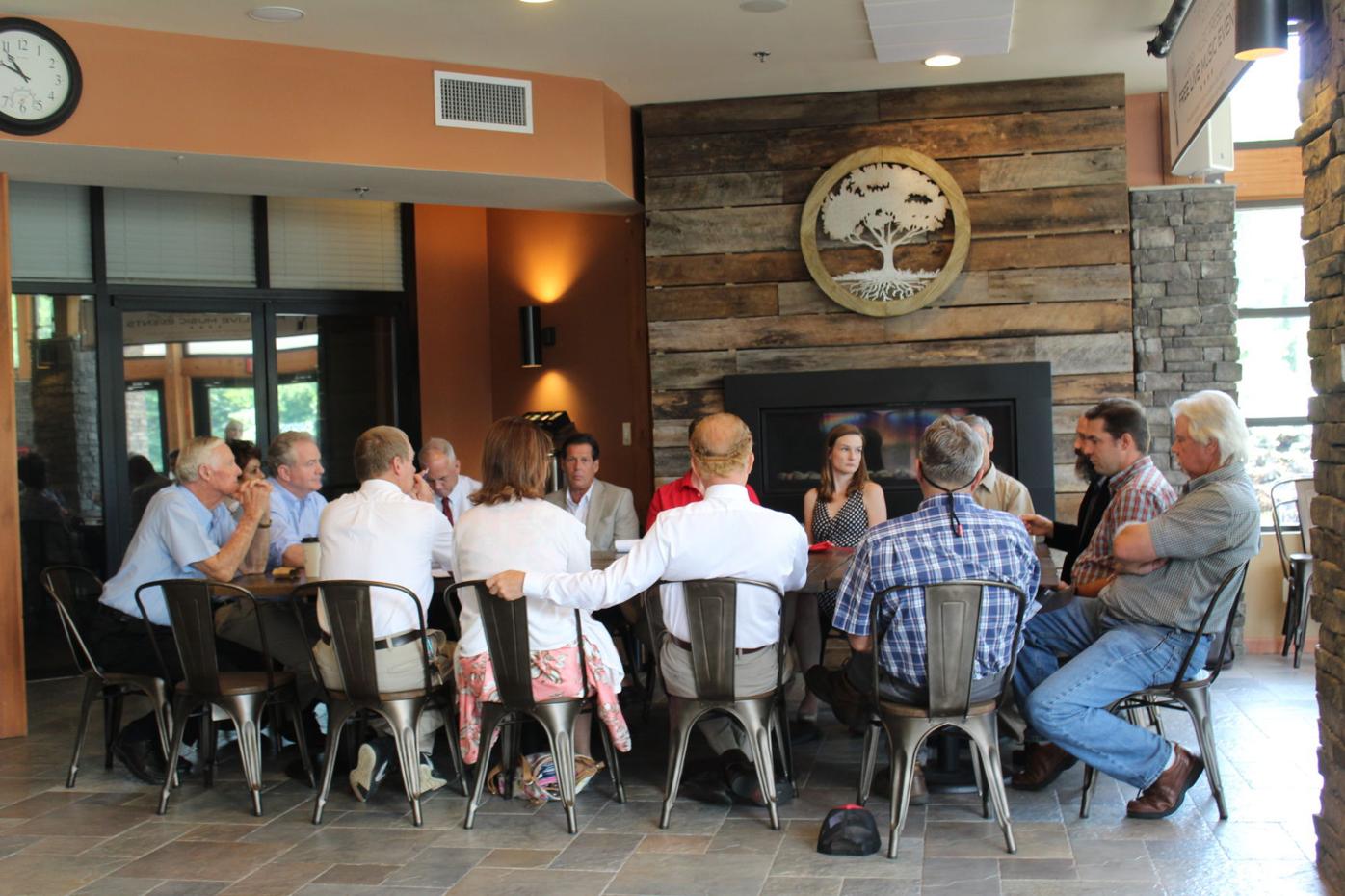 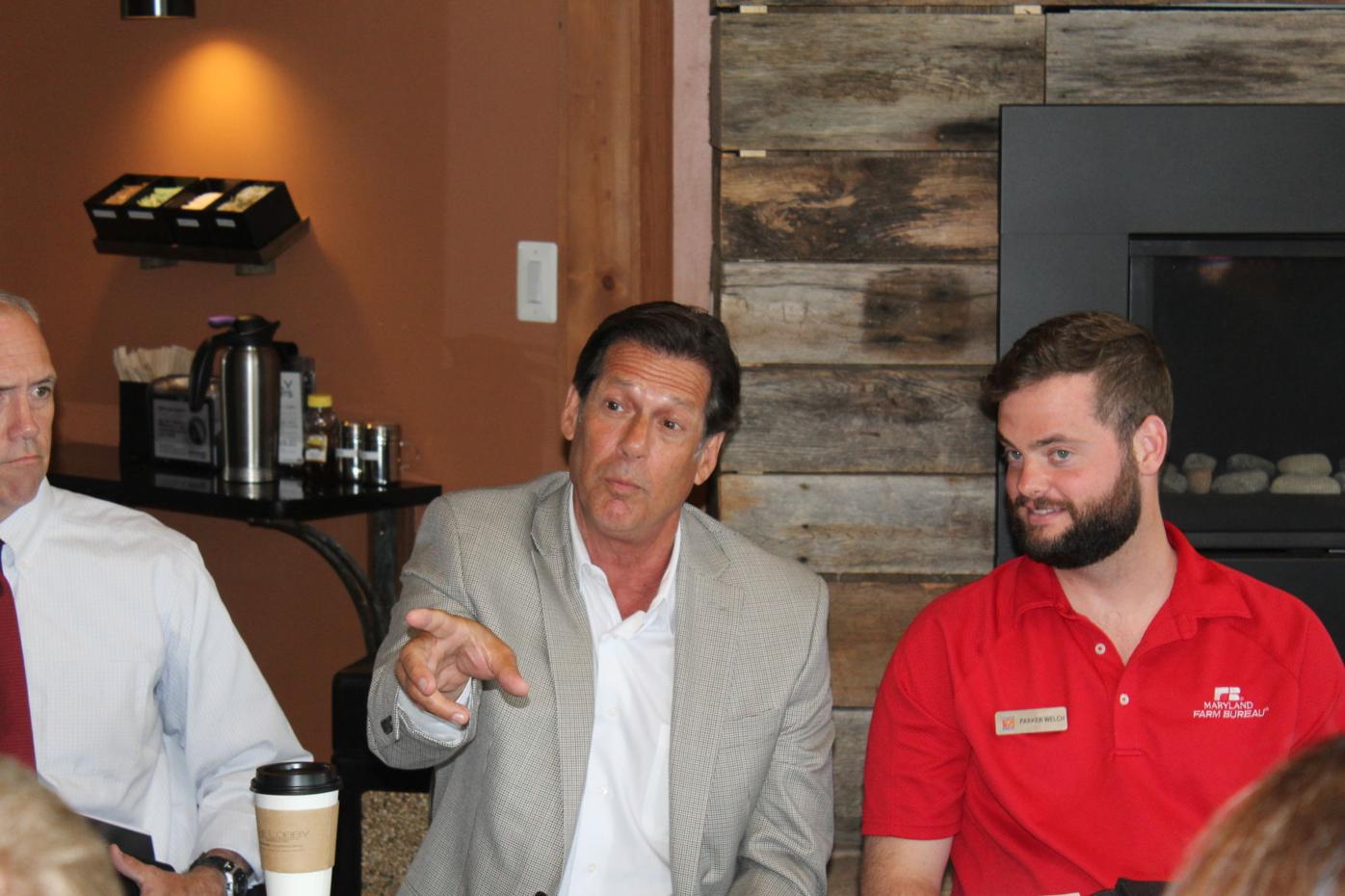 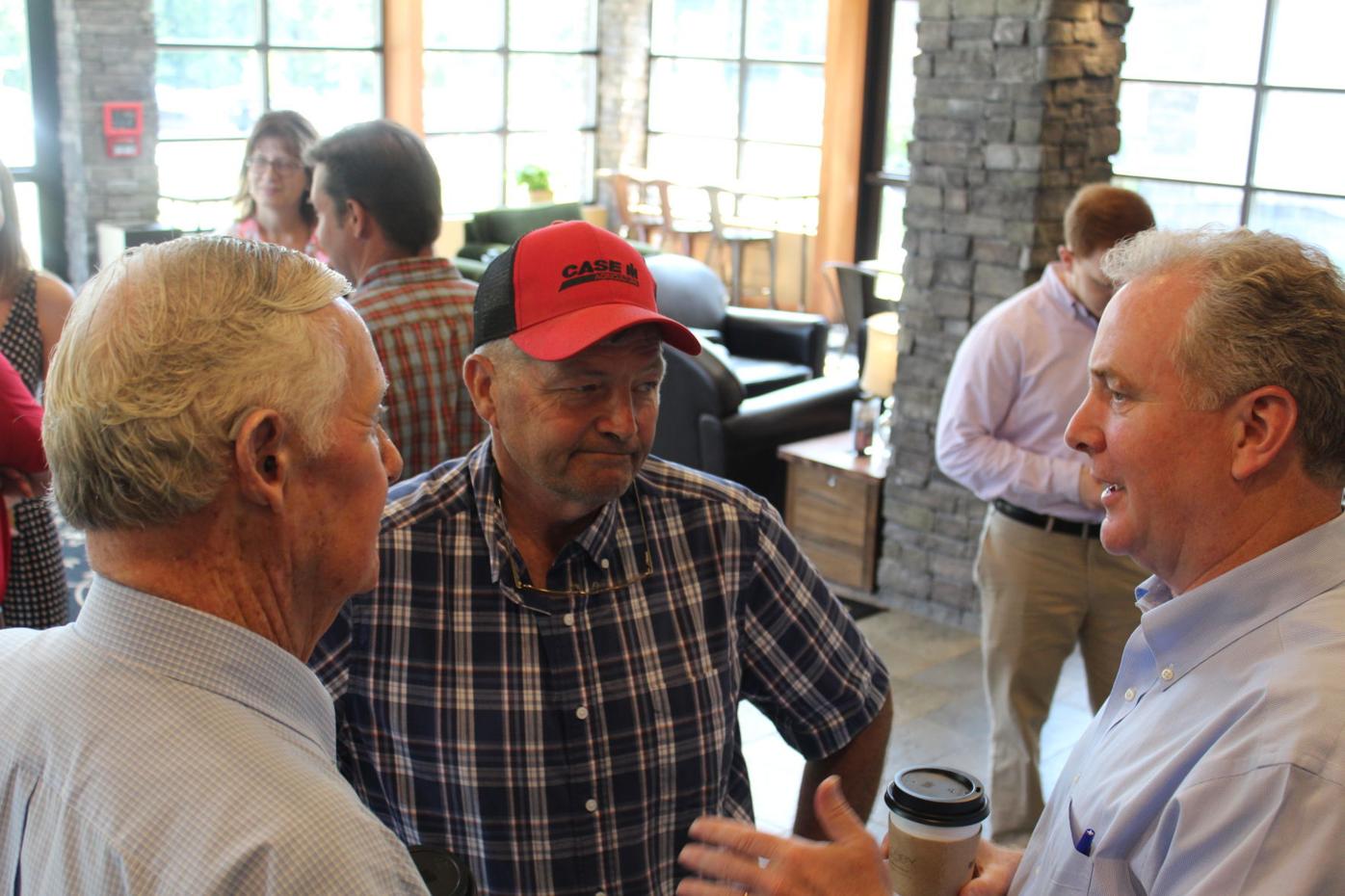 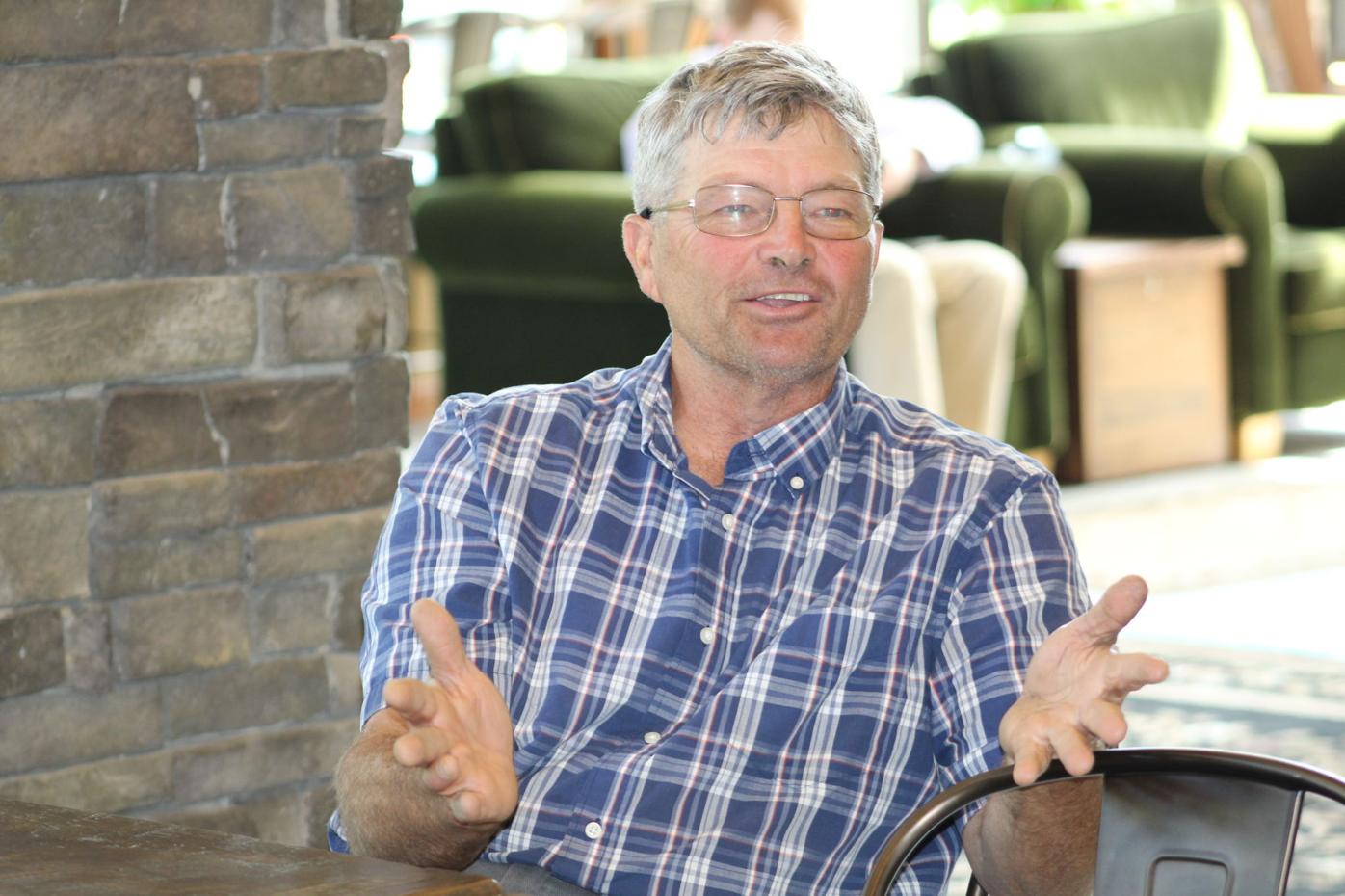 Former state secretary of agriculture and full-time Calvert County farmer Earl F. “Buddy” Hance shares his concerns over high premiums and deductibles under the Affordable Care Act with Sen. Chris Van Hollen (D-Md.) at a meet-and-greet with local farmers in Huntingtown on July 3. 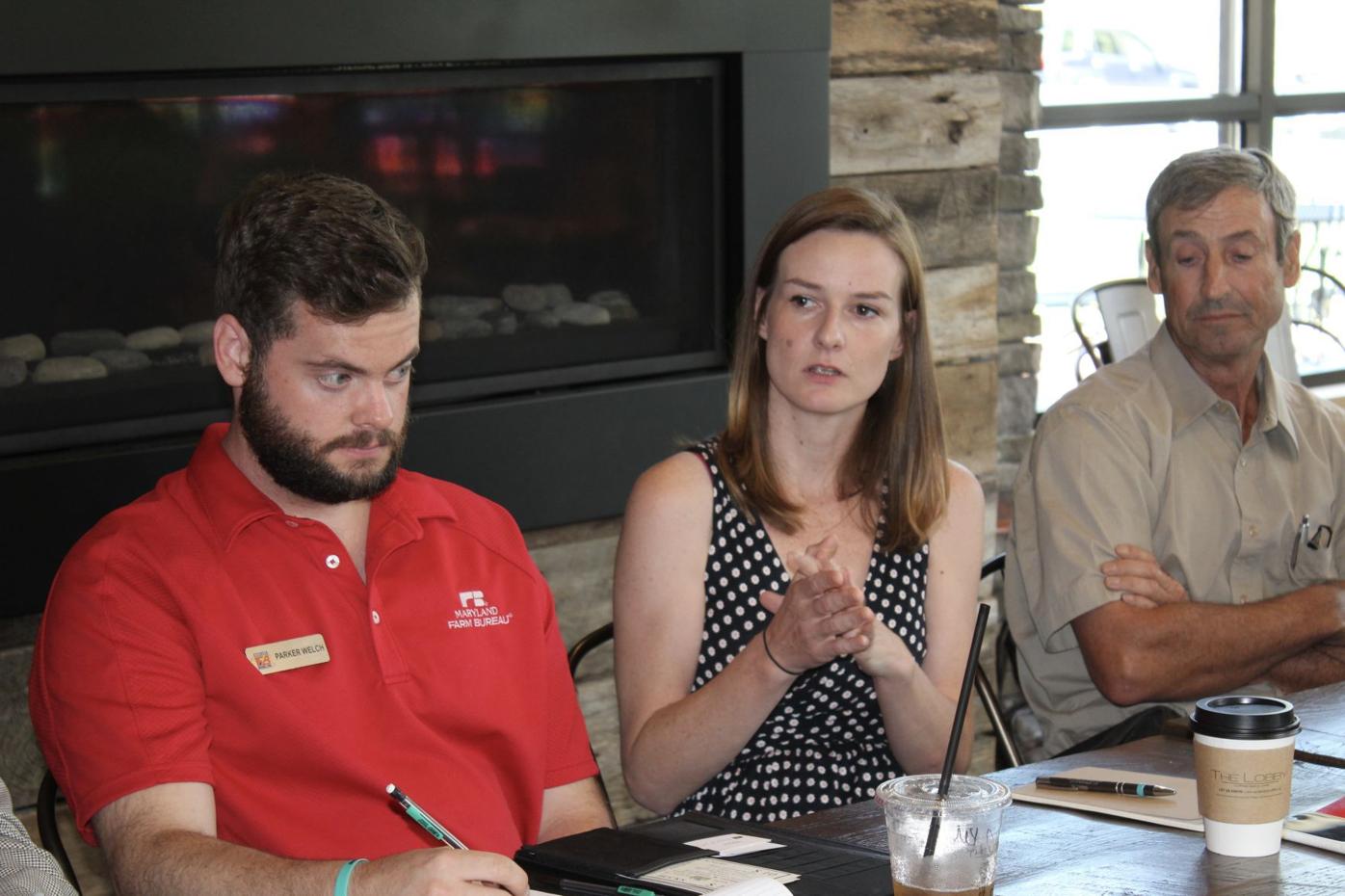 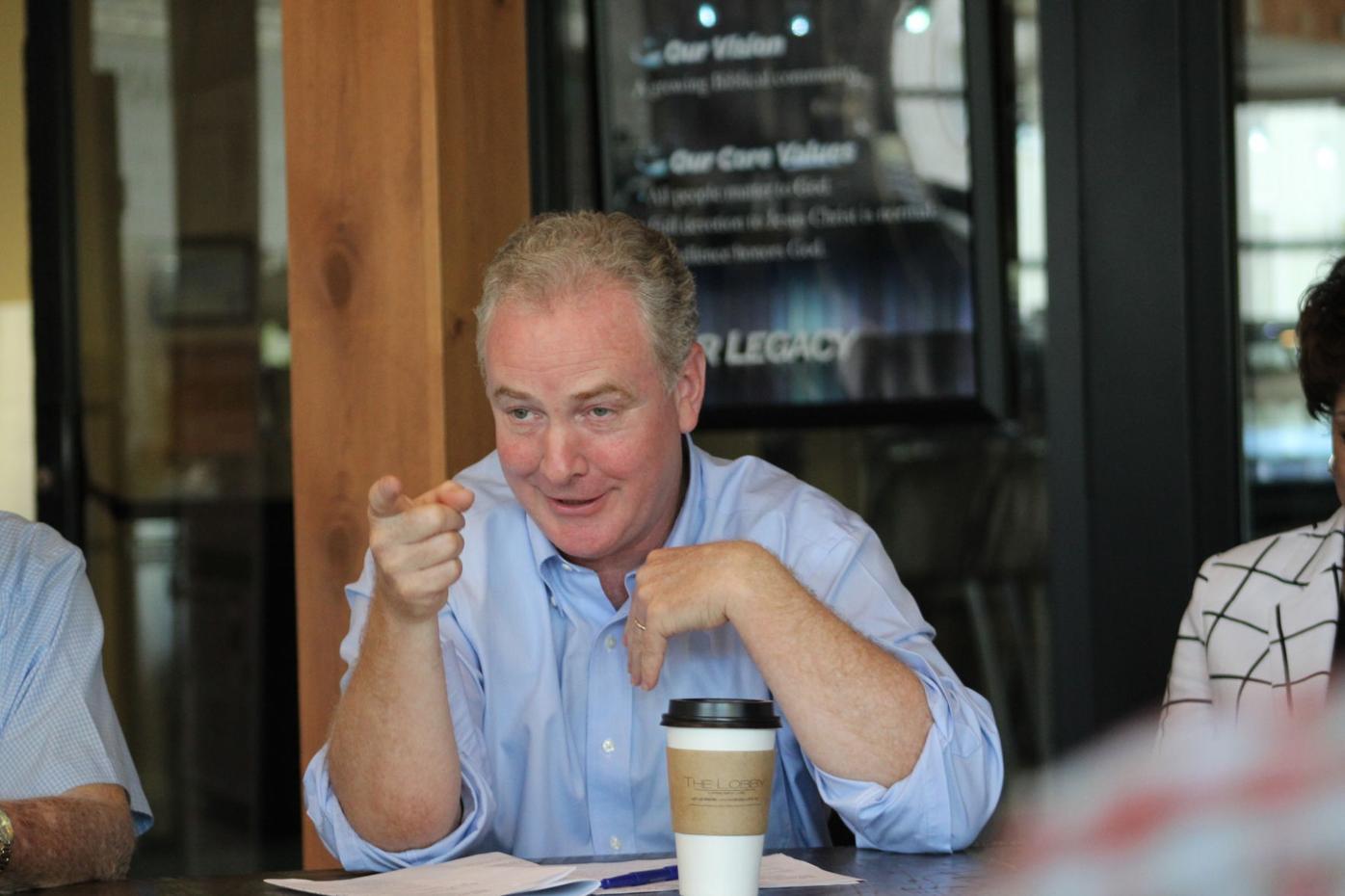 Sen. Chris Van Hollen meets with the Calvert County farming community at Chesapeake Church in Huntingtown on Monday, July 3, to discuss the Farm Bill and other concerns.

U.S. Senator Chris Van Hollen (D) , right, meets with the Calvert County farming community at Chesapeake Church in Huntingtown on Monday, July 3, to discuss the Farm Bill and other concerns. Hagner Mister, center, former Maryland secretary of agriculture and farmer, and Bill Clark, manager of the Calvert Soil Conservation District, were among the dozen farming professionals in attendance.

Former state secretary of agriculture and full-time Calvert County farmer Earl F. “Buddy” Hance shares his concerns over high premiums and deductibles under the Affordable Care Act with Sen. Chris Van Hollen (D-Md.) at a meet-and-greet with local farmers in Huntingtown on July 3.

Sen. Chris Van Hollen meets with the Calvert County farming community at Chesapeake Church in Huntingtown on Monday, July 3, to discuss the Farm Bill and other concerns.

The 2018 Farm bill, crop insurance, conservation resources, controlling the deer population and the Affordable Care Act were the topics of much conversation between Calvert County farmers and Sen. Chris Van Hollen (D-Md.).

The junior senator from Maryland made the trek to Chesapeake Church in Huntingtown on Monday, July 3, to hear the needs of local farmers. The visit is one of many stops Van Hollen is making to farming communities statewide.

“I really want to be here in Southern Maryland to talk about what’s on your mind, your priorities especially as it relates to the Farm Bill and any reorganization of the soil conservation services,” said Van Hollen to a dozen members of the Calvert farming community in attendance at The Lobby Coffee Bar within the church.

Van Hollen, who is the first Maryland senator since 1922 to be on the U.S. Senate Agricultural Committee and is also the senior Democrat on its Rural Development Subcommittee, expressed concern over how the Farm Bill is going to help or hurt Maryland farmers.

The Farm Bill represents the federal government’s policy on agriculture and food and is amended and reauthorized roughly every five years. President Donald Trump’s proposed bill released in late May debuted with reductions in U.S. Department of Agriculture staff, limits on crop insurance premiums assistance and cuts to food aid.

Calvert farmers expressed concern over the exclusion of crop insurance provision from the 2018 omnibus bill and the inability to be able to afford the premiums citing that it’s too expensive and that the premiums rise every time they cut the subsidies.

When farmers want to implement best practices on their farm, in order to qualify for federal programs they need a soil conservation expert to come in and write up the plan. One thing that was unanimous was the need for more technical expertise as part of the soil conservation districts.

“Maryland has certain requirements in [nutrient] management, one of them is stream buffers, and when you contact these good folks they’ll say you have a two-year wait,” said Owings’ farmer Michael Phipps.

Calvert Soil Conservation District manager Bill Clark explained that he does not have the technical help to address the requests and to do surveys. However, the state conservation officials sign people up on one-year plans, adding to the backlog.

“We’re signing them up for failure because they sign up [and] there is no way we’re ever going to get to them,” said Clark, adding that he does not have the human resources for surveys. “The Farm Bill needs to have technical assistance money in there. They don’t. They stick it all into [Environmental Quality Incentives Program] and speciality programs and there’s no help in my office.”

Slightly off topic, but very much relevant to the farming community, which is comprised of independent business owners, was a question about the Affordable Care Act, also known as Obama Care.

“My health insurance premium has tripled and my deductible has multiplied by five, just so I can afford it,” said former state secretary of agriculture and full-time Calvert County farmer Earl F. “Buddy” Hance. “I have to spend $27,000 out of my pocket before my health insurance will ever kick in.”

Van Hollen, who is also in the healthcare exchange, acknowledged that the premiums and deductibles have been going up and reported that Blue Cross Blue Shield has recently asked for a 50 percent rate increase.

“If you are an insurance company, you need to make sure that the people in your pool of all ages and backgrounds. If you’re only getting the sickest people and older people in your pool you have to increase premiums in order to not lose money,” explained Van Hollen, of the reasoning reported behind BCBS’s request.

Van Hollen inferred that the current White House administration’s decision not to enforce the individual mandate or social responsibility mandate, the requirement that everybody has insurance under the ACA “so that no one ultimately freeloads on the system,” is the cause for the rate increase.

Van Hollen said everyone needs to be in the system in order for it to work and that people waiting until they have an accident or health situation to get insurance place the burden of paying on others. The senator detailed at length the challenges and expected outcomes of the current Republican led efforts to repeal and replace the ACA.

Jamie Tiralla of Monnett Farms, who raises livestock, specifically cattle, lamb, goats and pigs with her husband Benson Tiralla, an associate supervisor with the Calvert Soil Conservation District, was in attendance with a variety of farmers and farming professionals. Ag runs deep in her family as she is also the vice president of the Calvert County Farm Bureau and chairwoman of the Maryland Farm Bureau’s Young Farmers Committee.

“We really wanted to speak with the senator on where he stood on some of the Farm Bill issues to make sure that the priorities we have on our farm and in Calvert County are going to be addressed,” Tiralla said to The Calvert Recorder, adding that conservation programs are her biggest priority which will allow better environmental stewardship and protect the Chesapeake Bay.

The senator stressed the importance of meeting with the farmers in an interview with the Recorder.

“They are the folks that grow the food that we eat,” said Van Hollen, adding that he felt collectively they had a good conversation about how he can support their efforts to grow fresh local produce in Calvert that’s available to everybody. He was also interested in how they can also work together to protect the streams and the Chesapeake Bay.

“Farmers are good stewards of the land,” said Van Hollen, who is advocating for voluntary partnerships between government agencies and farmers for soil conservation and land conservation.

The senator also talked with the farmers about the food nutrition programs, fresh produce programs and the Women, Infant and Children (WIC) program, which Van Hollen feels are very important to both consumers and the farming community.

“They ensure that moms and working people have access to fresh produce at farmers markets. Obviously they help the farmers. More of their fresh products gets consumed,” the senator explained.

Currently, 90 percent of the food grown in Calvert is sold locally, and a lot of that is the farmer’s markets. Van Hollen said a “decent portion” of that goes to the WIC program and the food nutrition snap programs.

Rev. Robert Hahn, the senior pastor at Chesapeake Church, chairman of End Hunger in Calvert County and event host, was eager to talk to farmers as his program is going to expand to serving lunch, and everything currently provided is locally grown.

“Our thing is not only buy local, shop local, but be local,” said Hahn, adding that the nonprofit wants to look at adding local meats and produce to the lunchtime menu.

Now equipped with the concerns and needs of Calvert’s farming community, Van Hollen intends to champion efforts for them and other Maryland farmers with specific goals in mind.

To address the concerns about crop insurance programs, Van Hollen suggested possibly making some modifications for the specialty crops.

Van Hollen assigned Col. Edmund Barrett to be his liaison to farmers in Southern Maryland and Anne Arundel County.

“We’re going to be working these issues hard and that’s why we want to be listening,” Van Hollen said.