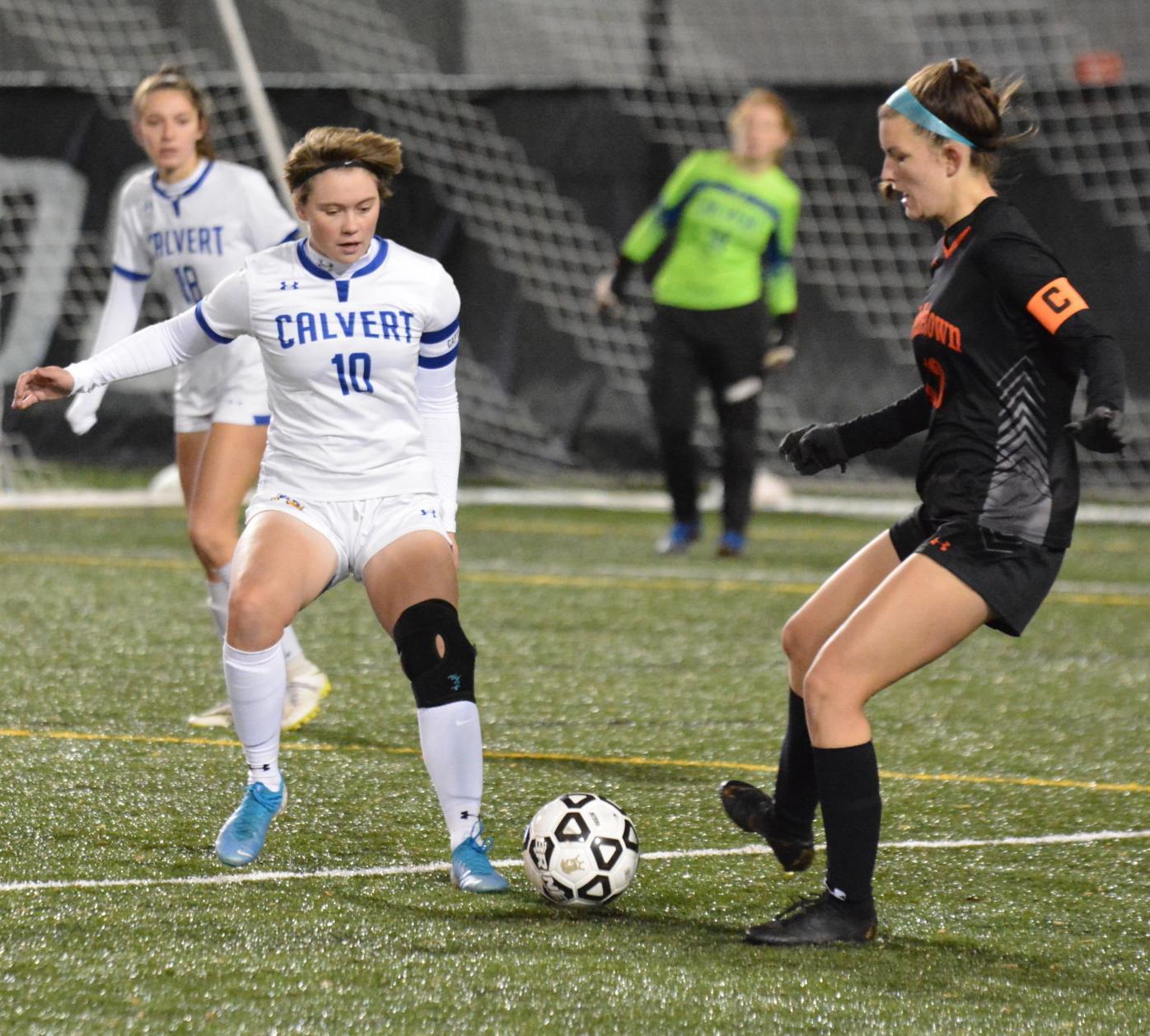 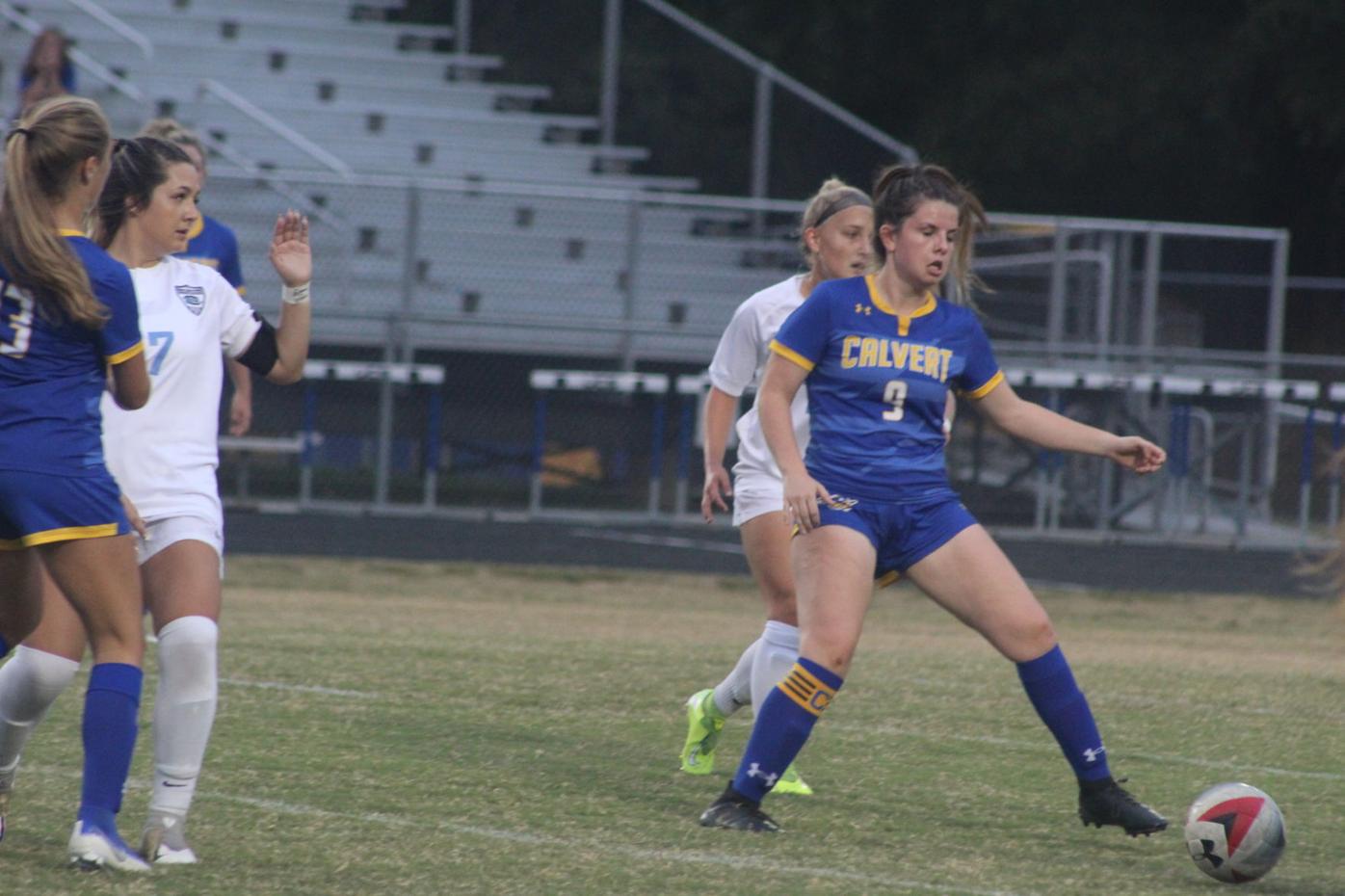 Calvert High School senior Claire Williams shields a Huntingtown defender from the loose ball in the first half of Thursday’s Southern Maryland Athletic Conference Chesapeake Division girls soccer game. Williams scored the Cavaliers’ lone goal on a penalty kick in the second half in a 3-1 loss to the visiting Hurricanes.

Calvert High School senior Claire Williams shields a Huntingtown defender from the loose ball in the first half of Thursday’s Southern Maryland Athletic Conference Chesapeake Division girls soccer game. Williams scored the Cavaliers’ lone goal on a penalty kick in the second half in a 3-1 loss to the visiting Hurricanes.

Following a year in which they were both key members of the Calvert High School girls soccer team that captured the 2A State title at Loyola University in Baltimore, Cavaliers’ graduates Alex Baker and Claire Williams have solidified their plans to continue playing in college.

Baker, who is not related to Calvert girls soccer coach John Baker, is headed to Mt. Olive University in North Carolina to continue her academic and athletic prowess, while Williams, whose older sister, Cameron Williams, is playing for the University of Richmond, will be headed north to attend St. Michael’s University in Vermont.

Both were part of the Calvert team that reached the 2A state finals during their freshmen season in 2016 then both capped their high school playing days with the state title last fall. Williams admitted that part of the Cavaliers’ motivation was inspired at halftime when they trailed, 1-0, only two hours after watching SMAC rival Northern cruise to a 5-0 victory in the 3A State title game.

“When we were down 1-0 at halftime, I told the other girls ‘we can do this,’” Williams recalled. “We had just watched Northern win a state title and we were not about to let them being the only SMAC team to win a title. We just kept fighting hard in the second half and London [Lewis] scored both of our goals. It was a great way to finish.”

While Williams wanted to head north to cooler climes for her college playing days, Baker noted that she always intended to head a little further south. Last summer, a Mt. Olive coach contacted her about playing for the school beginning in 2020 and Baker admitted that she was hooked upon making her unofficial visit to the school weeks later.

“The Mt. Olive coach reached out to me at a game and we stayed in touch,” Baker said. “So, when I went on my unofficial visit there I really loved the campus and the coaches and had the chance to meet some of the girls. It just felt like the right place for me right then. From then it was my top choice and they also had my major.”

Like Williams, Baker admitted that her senior year could not have ended on a more rewarding, surreal note. The Cavaliers had reached the 2A State title game in 2016 when the group was primarily comprised of freshmen, then their sophomore and junior seasons had ended well before that. But last fall, despite a few rough outings against fellow SMAC squads, Calvert peaked during the postseason.

“We were down 1-0 at halftime and we talked about just staying focused and just getting that one goal,” Baker said. “When London scored to tie the game we knew we were going to win. Then when she scored again it was so exciting. We had come so close our freshmen year, but the next two years were tougher than we anticipated. So, to be able to win the state title my senior year was amazing.”