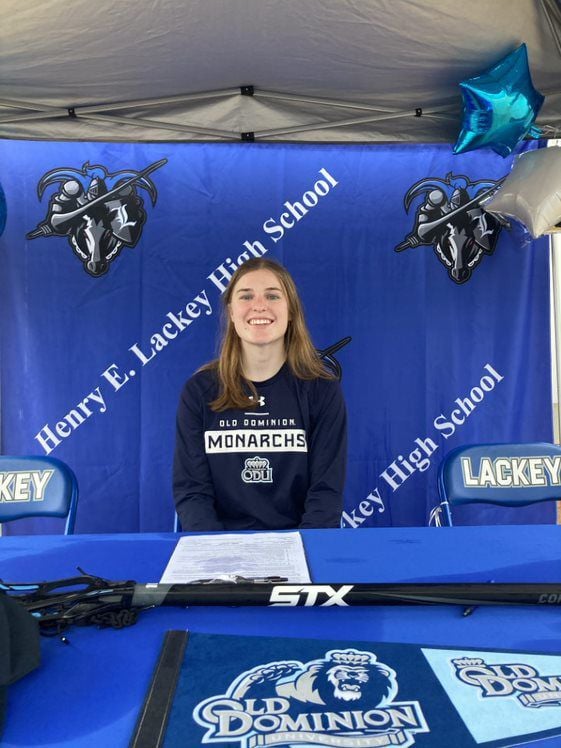 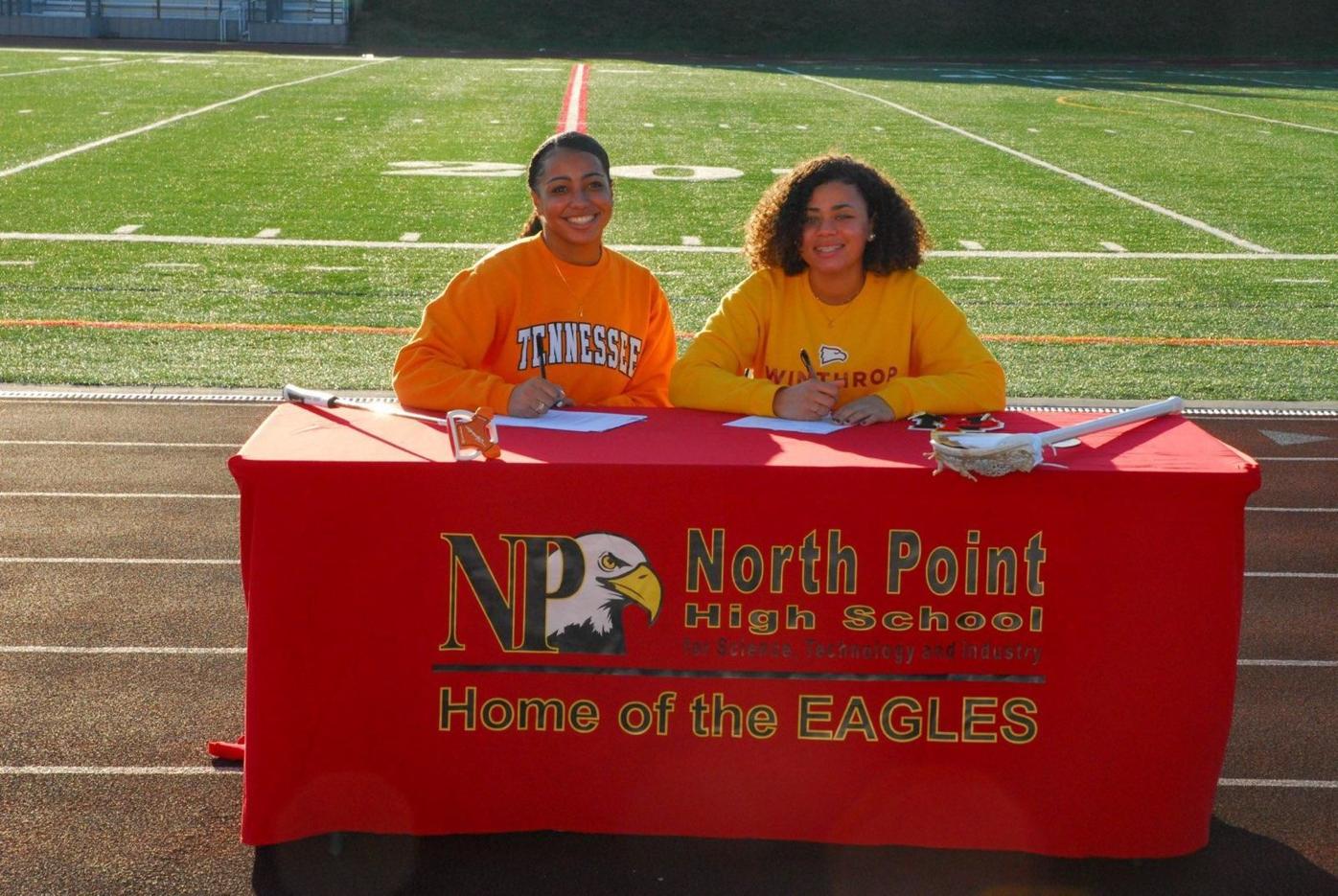 North Point High School seniors Bailey Davis, left, and Jordan Ball both signed their National Letters of Intent last Friday afternoon at the school. Davis is headed to the University of Tennessee for golf while Ball will be attending Winthrop University for women’s lacrosse.

North Point High School seniors Bailey Davis, left, and Jordan Ball both signed their National Letters of Intent last Friday afternoon at the school. Davis is headed to the University of Tennessee for golf while Ball will be attending Winthrop University for women’s lacrosse.

Two days after their initial signing ceremony was postponed by heavy rains, a trio of female senior athletes from North Point High School and another from Lackey all signed their National Letters of Intent last Wednesday to attend Division I colleges next fall.

North Point seniors Jordan Ball, Bailey Davis and Jordan Felton belatedly signed their letters on Friday, and all three of landed at Division I schools. Ball is headed to Winthrop University, Davis to the University of Tennessee and Felton signed with the University of Miami. Lackey senior Callie Culhane also signed her letter to attend Old Dominion University in Virginia where she will play women’s lacrosse.

Davis, the three-time reigning Maryland 4A/3A girls state golf champion, had committed to Tennessee before her junior season and then waited another two days to finally sign after Wednesday’s ceremonies were postponed. But Davis quickly admitted that last Friday afternoon’s signing session offered her a genuine sigh of relief.

“I had committed to Tennessee over a year ago, but being able to finally sign made it official,” said Davis, who will seek her fourth straight state title next spring. “I loved the school and everyone there just felt so welcoming. I’m hoping that we can have a season next spring. It would really mean a lot to be able to have a senior season, even if it is just confined to playing other SMAC teams.”

Ball is headed to Winthrop to play women’s lacrosse and major in education and is hoping to have the chance to put the finishing touches on her North Point career for cross country, swimming and lacrosse. She is headed into her final season with the Eagles with nearly 150 goals and could reach 200 next spring with a 10-game slate.

“Being able to finally sign was such a big relief,” said Ball, whose father, Jimmy Ball, is the boys’ basketball, cross country and girls’ lacrosse coach at North Point. “I had known for a while that I wanted to attend Winthrop and major in education and become a teacher someday. But finally being able to sign meant that I officially know that my next four years have been taken care of.”

Felton signed her letter on Friday to play women’s soccer at the University of Miami where she could get ample playing time as a freshman. Felton had an immediate impact on the Eagles’ success from her initial days as a freshman courtesy of her quickness, dribbling, passing and shooting skills and she was destined to sign with a Division I college at some point.

Culhane is headed to Old Dominion for women’s lacrosse, but the Chargers’ senior still has several goals in mind for her pending condensed final season ahead. Culhane will head into her final year with the Chargers with 142 goals, including 14 in one game against St. Charles as a sophomore, and she is still planning to play basketball, soccer and volleyball.

“I had committed to Old Dominion about a year ago, but it was great to sign with my family and coaches there,” said Culhane, who currently sports a 4.7 GPA. “I just loved everything about the school and the team. It was tough not being able to have a season last spring and then not be able to play soccer and volleyball in the fall. But I’m hoping we get to play everything next year.”

La Plata senior Julia Reese Sine also signed last Wednesday to attend Belmont Abbey University, where she will play field hockey. Sine has been an impact player for the Warriors since first joining longtime coach Pomi Radcliff’s squad and now she is headed to Belmont Abbey for the fall of 2021 to continue her field hockey playing days.