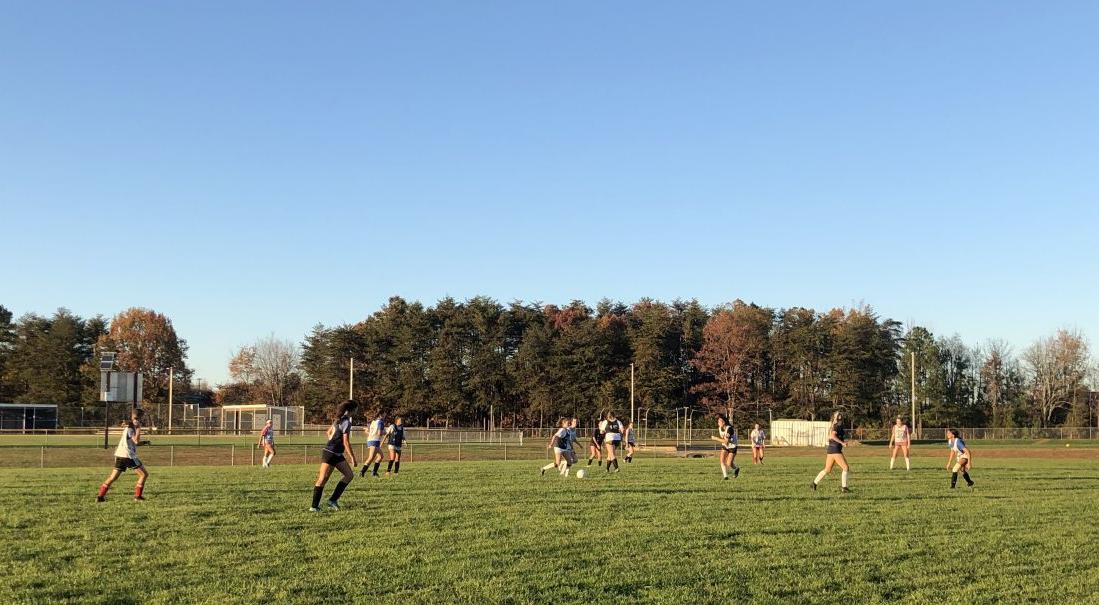 Members of the La Plata High School girls soccer team participate in practice last week. The Warriors compete in intra-squad scrimmages but could not travel to face other county squads.

Members of the La Plata High School girls soccer team participate in practice last week. The Warriors compete in intra-squad scrimmages but could not travel to face other county squads.

During the second week of November, at a time when they would typically be putting the finishing touches on their respective seasons, the numerous La Plata High School fall sports teams were enjoying the spring-like conditions last Monday afternoon until sunset made its early arrival.

All of the outdoor practice fields at La Plata were busy last week with athletes and coaches running through drills and with a full complement of equipment. While their counterparts in neighboring Calvert County recently concluded fall sports workouts sans equipment, the soccer, field hockey and volleyball teams at La Plata were busy until last Friday when Charles County abruptly ceased all conditioning and workouts due to increases in COVID-19 numbers here and around the country.

“It’s been great being out here,” said La Plata senior girls soccer player Kristen Ging, who has committed to Salisbury University for the fall of 2021. “Now me and the other seniors have taken a leadership role and help get the younger players involved in the practices and [intra-squad] scrimmages. We’re really exciting about having a season in the spring.”

While each of the three counties that comprise the Southern Maryland Athletic Conference have approached the sports seasons differently to this point, they were set to come in line next month. Beginning on Dec. 7, all of the SMAC schools were going to begin winter sports practices with the shortened season set to run Jan. 4 to Feb. 13. All of that is up in the air now, though, as the coronavirus pandemic continues to impact schools and athletics.

“It’s odd that everyone is on a different schedule,” said La Plata 17th year field hockey coach Pomi Radcliff. “I wasn’t expecting us to be able to come out here and use the equipment. But it’s been great for the girls, especially since we have so many freshmen and sophomores here. We really didn’t have a big senior class last year.”

While Radcliff might be among the veteran coaches at La Plata and the SMAC, Warriors’ first-year volleyball coach Christine Owens will be a newcomer in only one sense. A Lackey High School alum, where she was a three-sport star and member of the Chargers’ athletic Hall of Fame, Owens arrives in the midst of a rebuilding season but with a foundation built on a promising freshman class.

“I’m excited to be part of a great program with such a rich tradition,” said Owens, who also coaches the Southern Maryland Volleyball 18-under club team. “We’re going to have a young team, but we have five freshman that are really good. They’re going to be good for the next four years. My goal here is not just to be competitive but to eventually win a state championship.”

Among the handful of freshman that will be among the corps group of players for the Warriors potentially through the 2023 season is Addy Donnick, perhaps the best incoming freshman swimmer in SMAC. Donnick has established herself in the pools each summer with Hawthorne in Prince-Mont Swim League action and she is expected to play a major role for the Warriors on the floor and in the pool for the next four seasons.