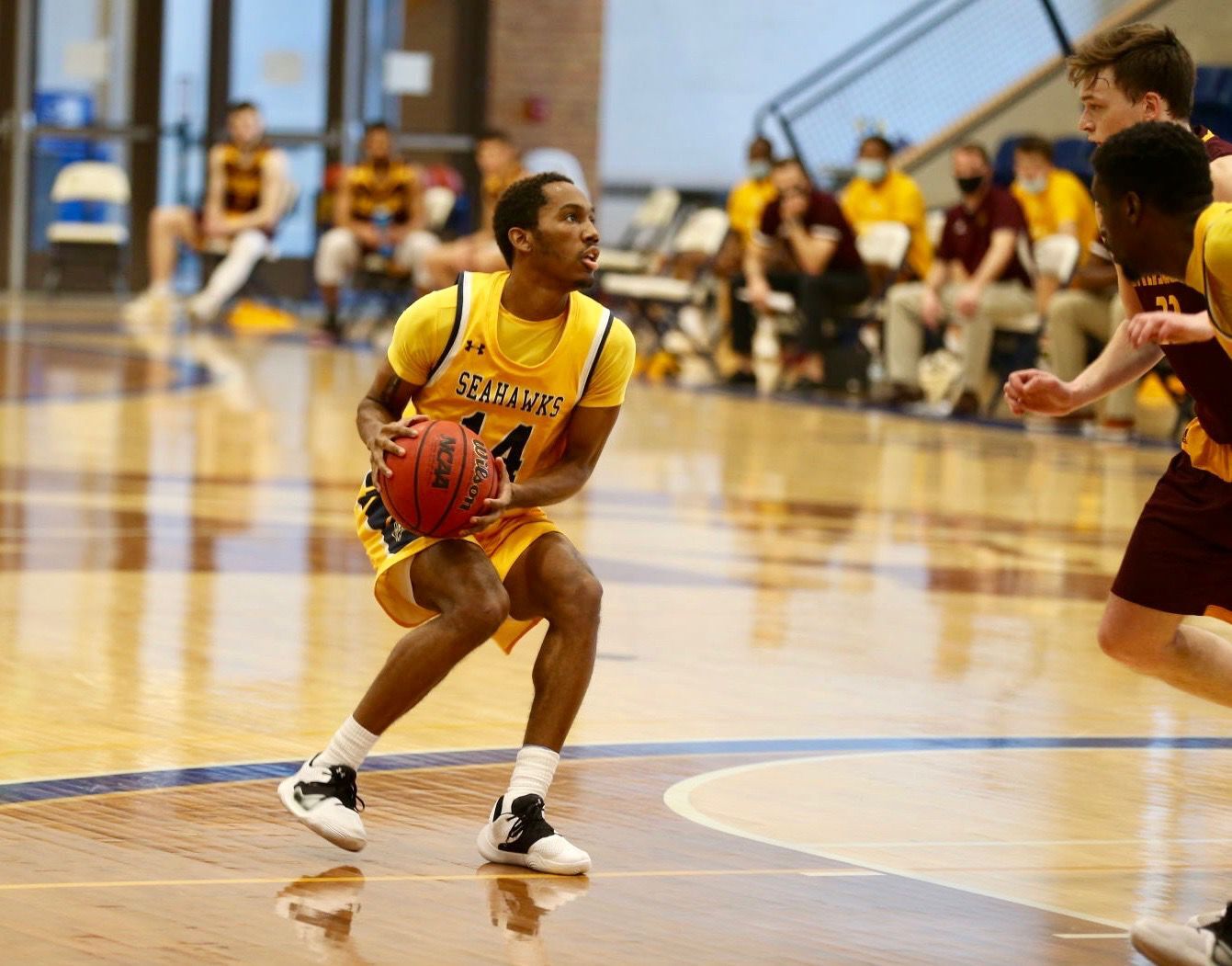 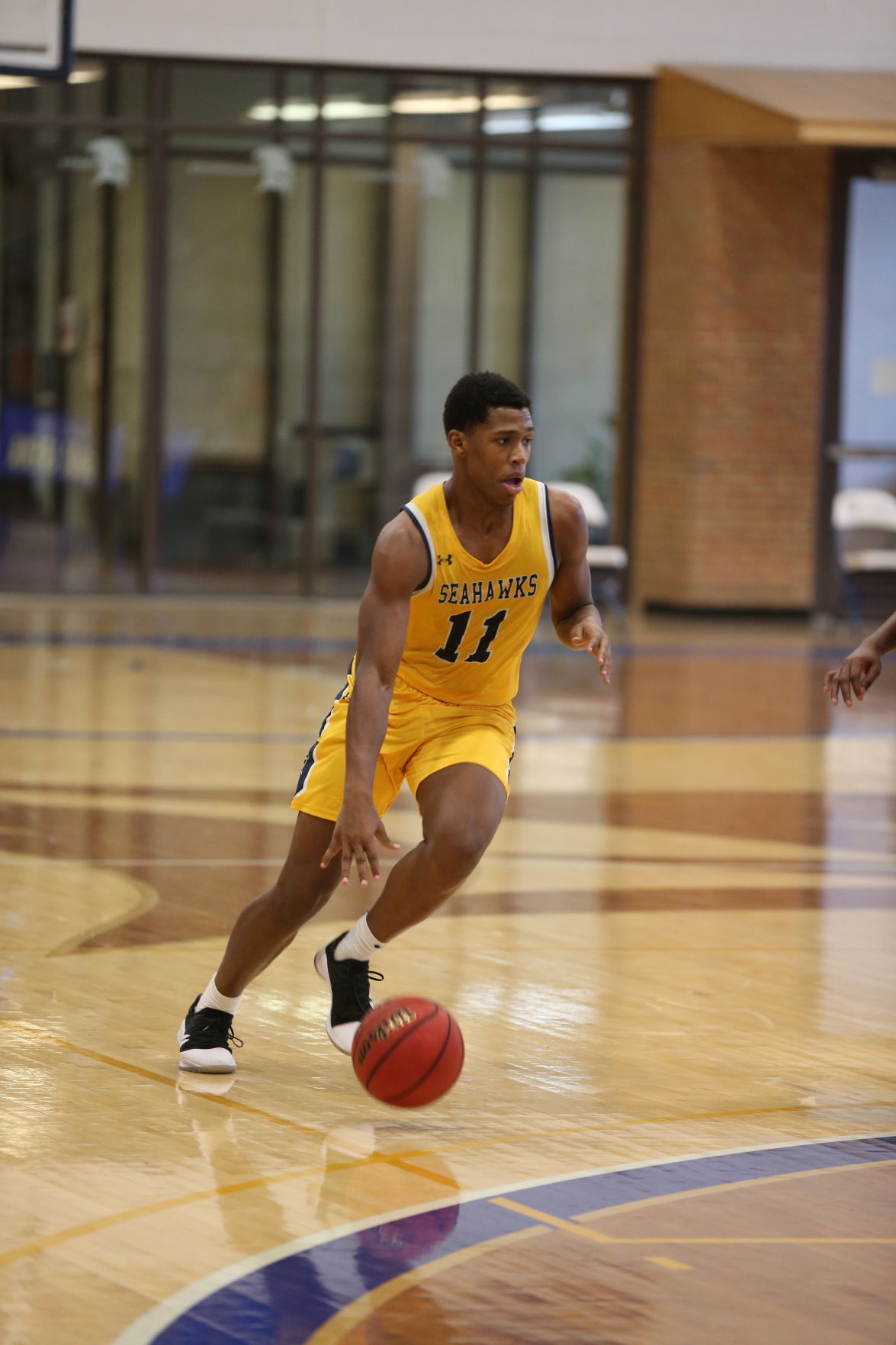 During a very busy stretch of their abbreviated schedule when it was slated to play three games in as many days last weekend, the St. Mary’s College of Maryland men’s basketball team outfought Southern Virginia University for a 72-66 victory on Saturday afternoon.

St. Mary’s College and Southern Virginia were virtually inseparable through the early stages of the game, with the Seahawks and Spartans exchanging leads on eight occasions. Southern Virginia owned its biggest lead of the contest at 16-13 with 11:20 remaining in the first half, but the Seahawks responded with a pivotal 16-0 run over the next eight minutes to forge a 32-18 advantage.

“We just played them a few days ago, so we know each other pretty well,” said St. Mary’s College men’s basketball coach Chris Harney, a 1997 alum and former Seahawk. “It was like a chess match. We knew what they wanted to do, so we tried to take that away from them, and they knew what we wanted to do. But our young guys really stepped up. In close games, young teams usually make mistakes, but my guys played really well.”

St. Mary’s led 37-25 at the intermission, but Southern Virginia opened the second half on a 13-4 run with Conner Merchant (16 points) connecting on a pair of three-point field goals The Seahawks responded by pushing the lead back to 10 points on two occasions, but Southern Virginia again rallied to get within a point at 58-57 with 7:35 remaining.

With the outcome now hanging in the balance, the Seahawks’ youth then paved the way for the victory. Freshman Micah Henry (24 points), sophomore Daryn Alexander (18 points) and sophomore Gary Grant (13 points) accounted for 12 of the Seahawks’ last 14 points and the hosts twice pushed the margin back to eight points over the last four minutes.

“I think we’ve really come a long way since the beginning of the season,” said Henry, a product of Hammond High School in Howard County. “We’re really playing a lot more as a team now. We struggled a little bit offensively early in the season, but now we’re really starting to gel together. It’s been great just having these games this season. It will help us build for next year.”

One night earlier, on Feb. 19, the St. Mary’s men had little trouble with visiting Neumann University, coasting to an 82-49 victory. The Seahawks opened the game with an 8-0 run, added an 11-0 run later in the half to forge a commanding 48-25 advantage at the intermission. The Neumann Knights got within 20 only briefly in the second half and the Seahawks led by as many as 43 with 3:30 remaining en route to the lopsided victory.

Cameron Rucker led the Seahawks with 17 points, Gary Grant had 14, Olumide Lewis added 13, Darian Callaway had 11 and Jordan Scott added 10 points to go along with seven rounds and three blocked shots. Kyson Rawls led the Knights with 16 points in a losing cause. Grant, a Thomas Stone High School product, was the Capital Athletic Conference rookie of the year as a freshman in 2019-20.

The Seahawks fell 58-75 to Delaware State University, a Division I college, in an exhibition match Sunday, Feb. 21.

St. Mary’s College men’s team closes out its abbreviated season this week, first with an away game at Neumann University in Pennsylvania planned for Feb. 25, and then a 2 p.m. home game against Marymount University on Saturday, Feb. 27, before an exhibition game at Norfolk State University at 2 p.m. on Feb. 28. The women’s basketball team has its last game set for Feb. 27 at 7 p.m. against Neumann University.