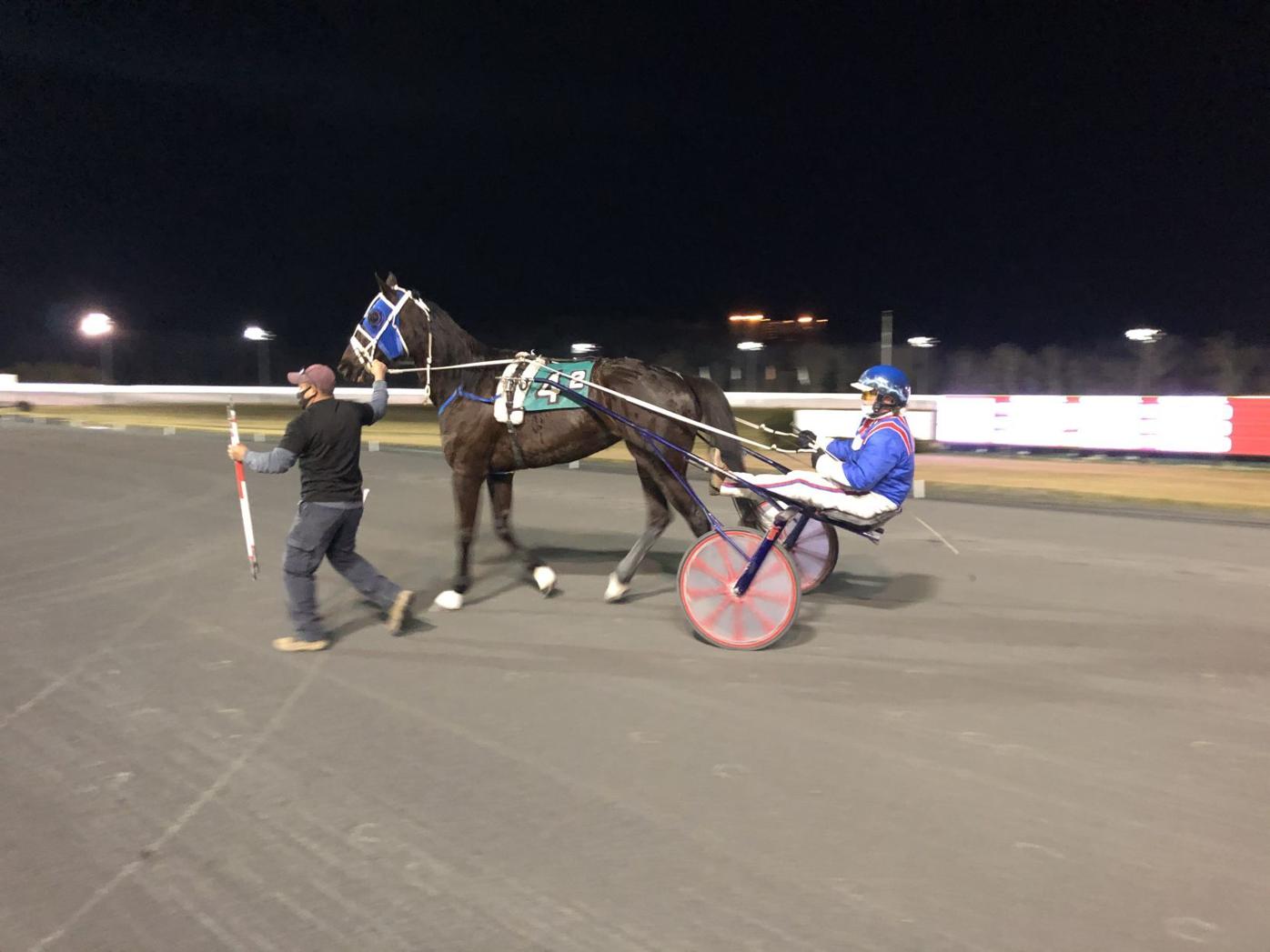 Trainer-driver Jackie MacLeod guides Winkys Credit into the winners circle at Rosecroft Raceway last Wednesday evening after he steered the trotting mare to her fourth straight victory in 1:58. 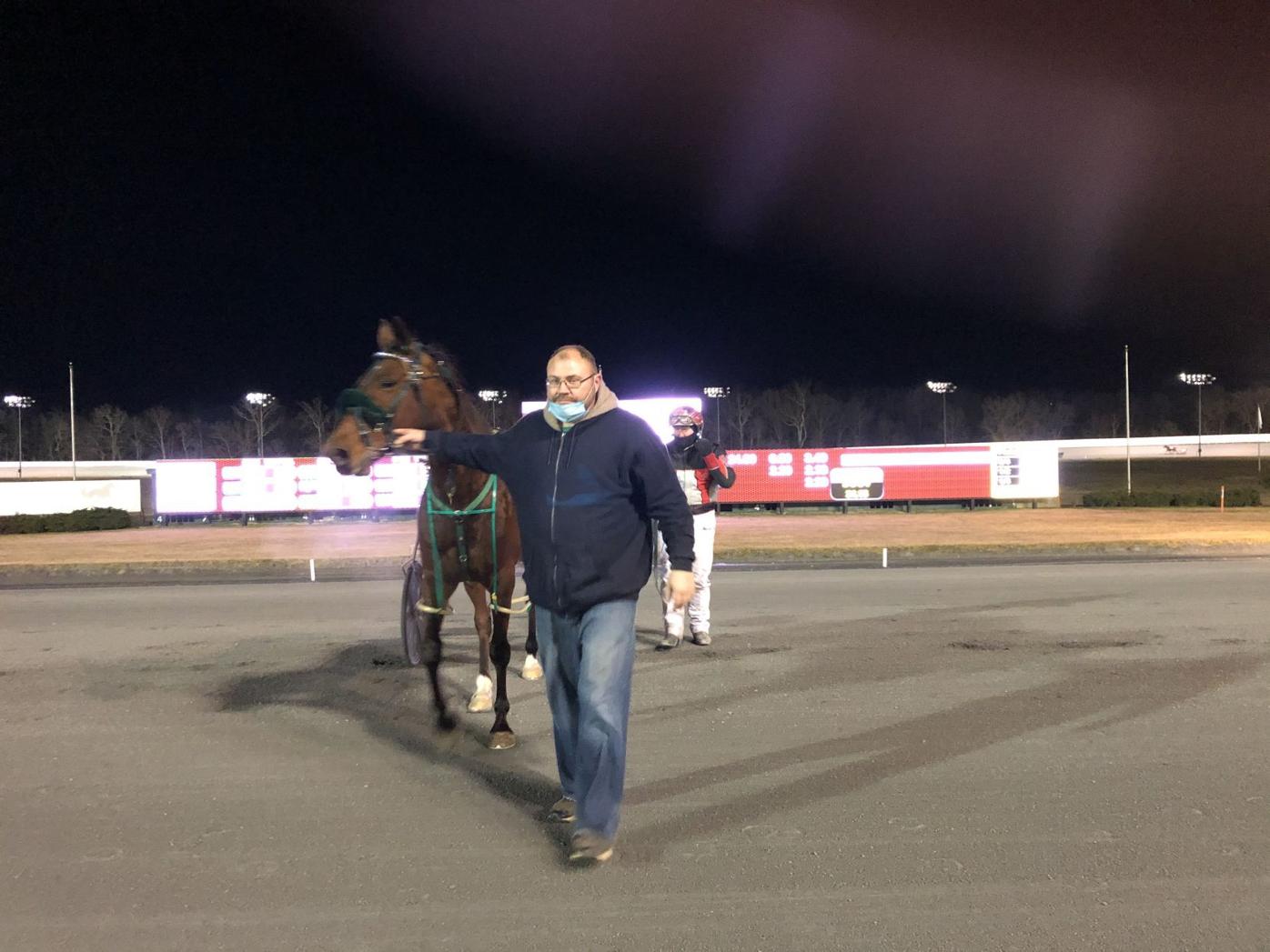 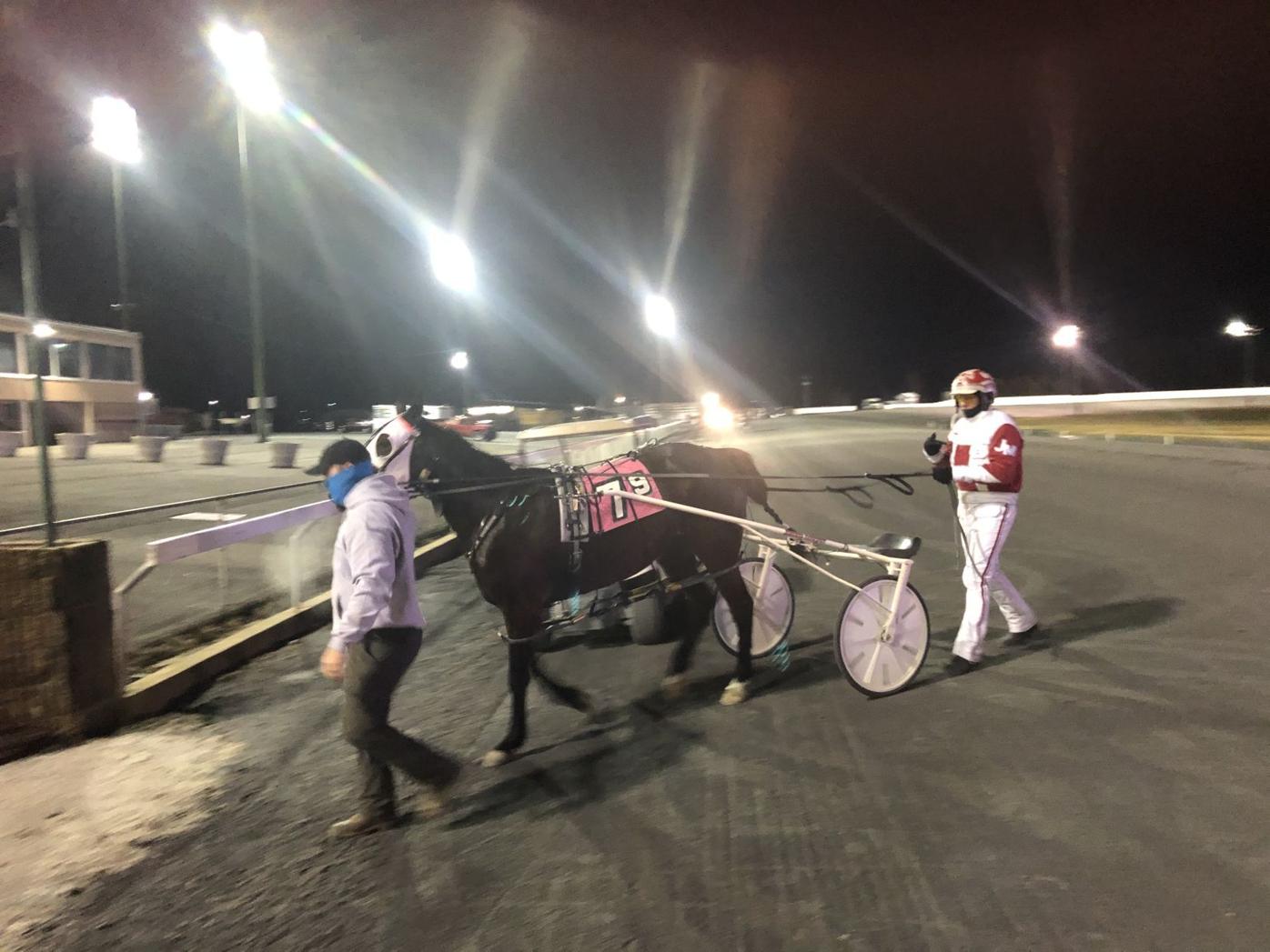 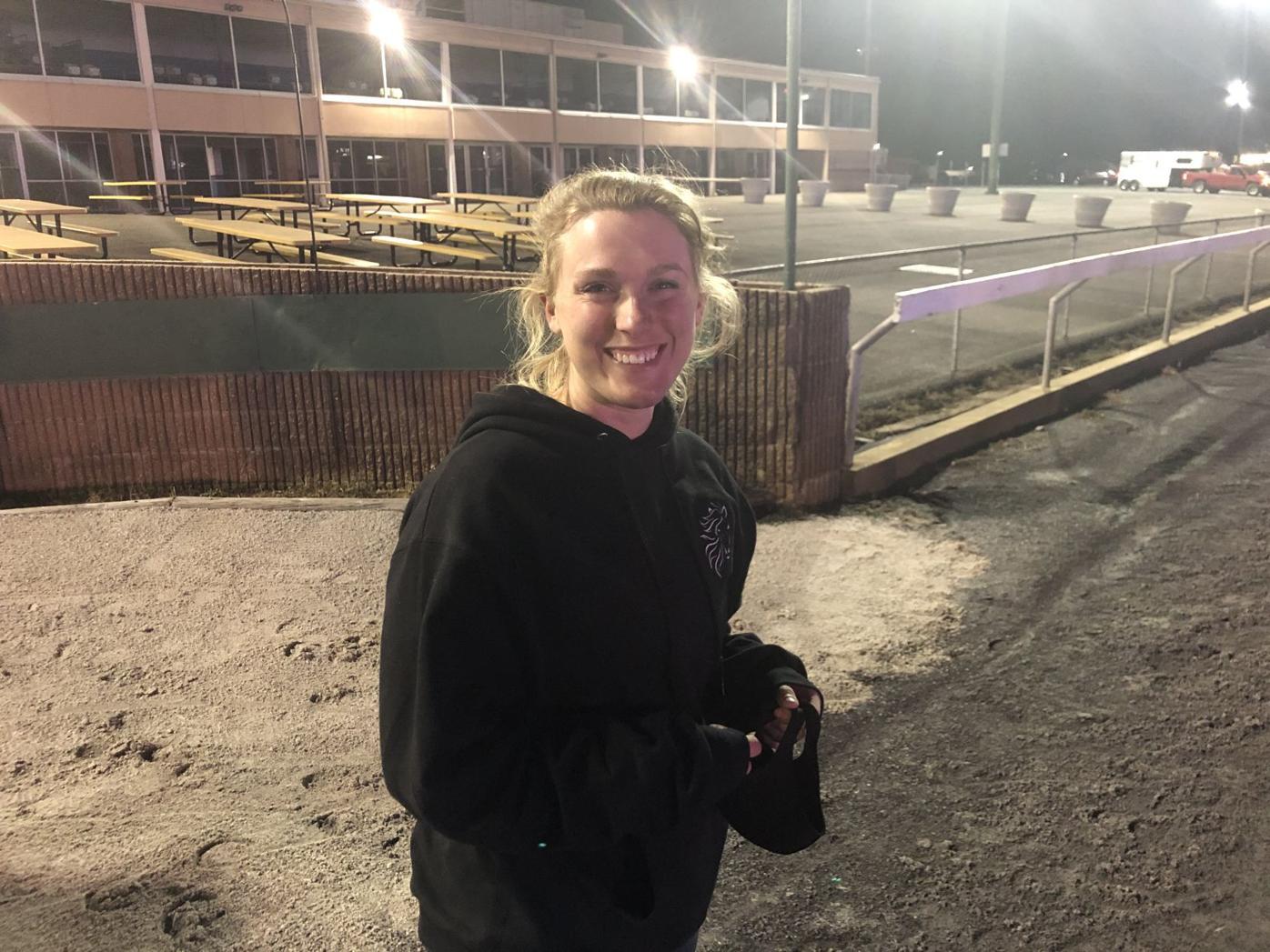 Owner-trainer Brittany Bounds is all smiles in the Rosecroft Raceway winners circle after her pacing mare Opulent scored in 1:57 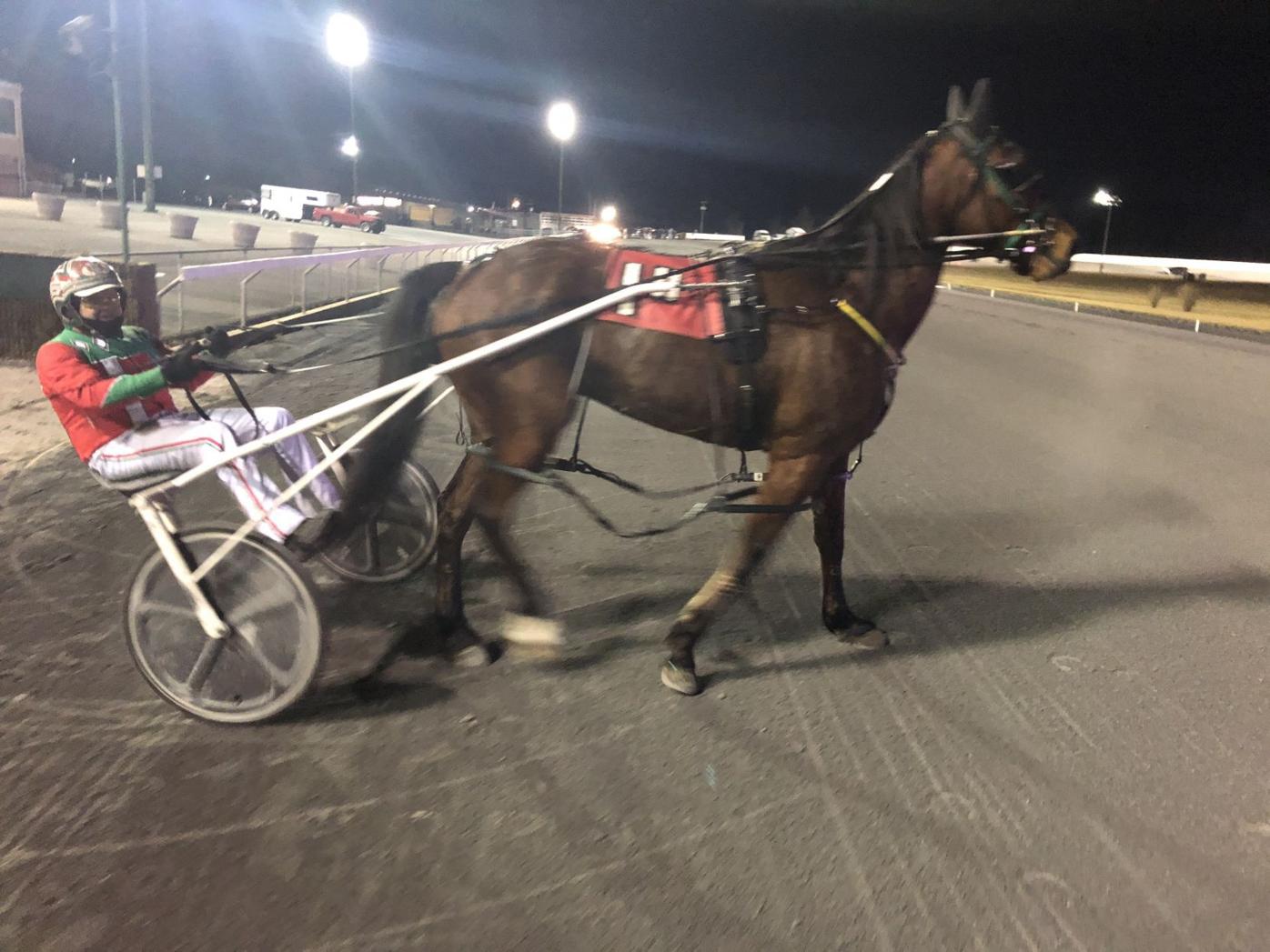 Trainer-driver Jackie MacLeod guides Winkys Credit into the winners circle at Rosecroft Raceway last Wednesday evening after he steered the trotting mare to her fourth straight victory in 1:58.

Owner-trainer Brittany Bounds is all smiles in the Rosecroft Raceway winners circle after her pacing mare Opulent scored in 1:57

While the top male pacers of all ages tend to gather at Rosecroft Raceway on Sunday nights, the track offers pacing mares and trotters of both genders the chance to garner some of the spotlight on Wednesday evenings.

Last Wednesday, February 17, proved to be the typical Wednesday card at Rosecroft with a bevy of pacing distaffers and older trotters displaying their talents on a chilly night in Fort Washington. From the outset the card also proved to be quite chalk as favorites were able to outshine long shots amid the seasonably cold conditions.

In the opening race on the card, Breadcrumb Income (Brian Burton) easily lived up to her role as the even-money choice when she overcame post six to gain command and carved out honest fractions en route to a two-length score in 1:54.4. An eight-year-old Nuclear Breeze mare owned and trained by Burton, Breadcrumb Income had been a fixture in the $12,000 Maryland Open for the past three years before getting a hint of class relief last Wednesday to notch her first win of five starts this year.

One race later in a non-winners of five races lifetime class for trotters, Winkys Credit (Jackie MacLeod) forged a mild upset when he gained command soon after the start, got a breather by the half in 1:00.2 then held safe a first over bid from 7-5 favorite Greek Legend (Austin Hanners) for a length score in 1:58 as the solid 7-5 second choice.

A five-year-old Charlie De Vie mare trained, driven and co-owned by MacLeod along with Robert Kloss, Jr., Winkys Credit recorded her fourth straight tally and now sports four wins a $22,000 banked from 12 career starts. Her four wins at the current Rosecroft meet have been in 1:58, 1:57.3, 1:58.1 and 1:57.4 and have all come in wire-to-wire fashion.

"She's been much better since I decided to put her on the front early in the mile and see what happens," said MacLeod, noted for his conditioning work with Dakota Express and Dancing On A Star. "She's pretty handy once she makes the lead and she knows when to pick it up."

Several races later in a non-winners of $2,500 last four starts class for pacing fillies and mares, Tanzanite Love (Frank Milby) overcame post eight to gain command early then outlasted the late rally from 2-5 choice Psychic Blue Chip (Jason Thompson) to score by a length as an overlooked 11-1 shot in 1:55.1.

A seven-year-old I'm Gorgeous mare owned and trained by Jason Walters of Hughesville, Tanzanite Love notched her first win in three starts this year and now owns a 10-17-16 slate and nearly $150,000 banked from 119 lifetime tries. It was the sixth win from 15 starters this season for Walters, who has won races with trotters and pacers during the early stages of the winter meet.

One race later in a non-winners of four races lifetime class for pacing fillies and mares, Opulent (Jared Moyer) rallied from well off the pace and widest of all to forge a mild 3-1 upset in 1:57. A four-year-old Bettor's Delight mare owned and trained by Brittany Bounds, Opulent notched her first win in four starts this year and now owns a 4-3-3 slate and $21,500 banked from 18 lifetime tries.

Several races later in a non-winners of seven races lifetime event for pacing fillies and mares, Thats Fun rallied from well off the pace and widest of all to score as the 3-1 third choice in 1:56.4. A five-year-old Cool Flying Fun mare trained by Shaun Callahan for Breakaway Racing, Thats Fun posted her first win in six starts this year and now owns a 6-6-4 slate and nearly $60,000 banked from 52 lifetime outings.

Then one race later in the $12,500 Maryland Filly-Mare Open for pacers, Jive Dancing A (Jonathan Roberts) posted her second straight victory in the top class when she swept to command down the backside then held safe the late, wide rally of Bet You Im Rockin (Austin Hanners) to score by two lengths in 1:53.2 as the 4-5 favorite.

A seven-year-old Rock N Roll Heaven mare owned and trained by Michael Hall, Jive Dancing A has won both of her local starts since arriving from Dover Downs this month and now owns two wins and $15,000 banked from six starts this year. One of four winners on the night for Roberts, Jive Dancing A now sports a 22-12-7 slate and over $140,000 banked from 86 lifetime tries.

"She's really good right now," Roberts said. "When I turned her loose down the backside she just glided right by those other mares. I'm glad Mike decided to bring her over here."

Then one race later in a non-winners of $5,000 last four starts class for trotters, Church Choir (Frank Milby) benefited from a pocket trip behind 4-5 choice Whiskeyinmywater (Russell Foster) through the first three calls then angled out late to overhaul the favorite for a neck score in 1:57.4. A five-year-old Chapter Seven gelding owned, trained and driven by Milby, Church Choir notched his third win from five seasonal outings and now owns a 10-14-11 slate and nearly $84,000 banked from 93 lifetime tries.

While the Maryland Open Trot did not fill last Wednesday at Rosecroft, one of the best older trotters in the country has numerous Maryland ties. JL Cruze, a 10-year-old gelding trained by Eric Ell for co-owner Kenny Wood, both of Denton in Caroline County, JL Cruze has won twice in four starts at the Meadowlands in New Jersey this year, including a handy 1:52.4 score in his most recent outing with Dexter Dunn in the bike.