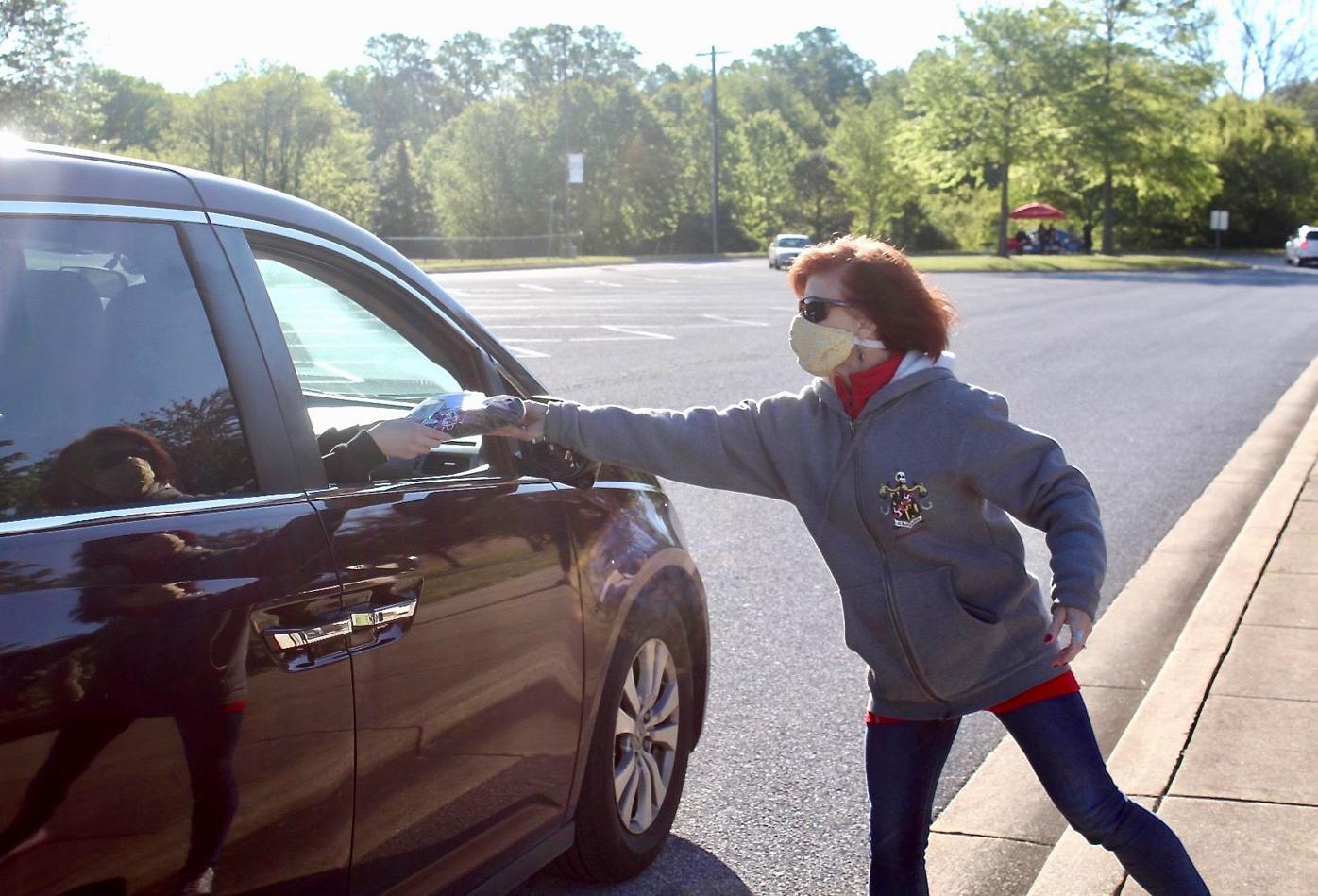 Shelly McDaniel, an assistant principal at Chopticon High School, passes out a cap-and-gown package as students and parents drove up to receive them Tuesday morning. 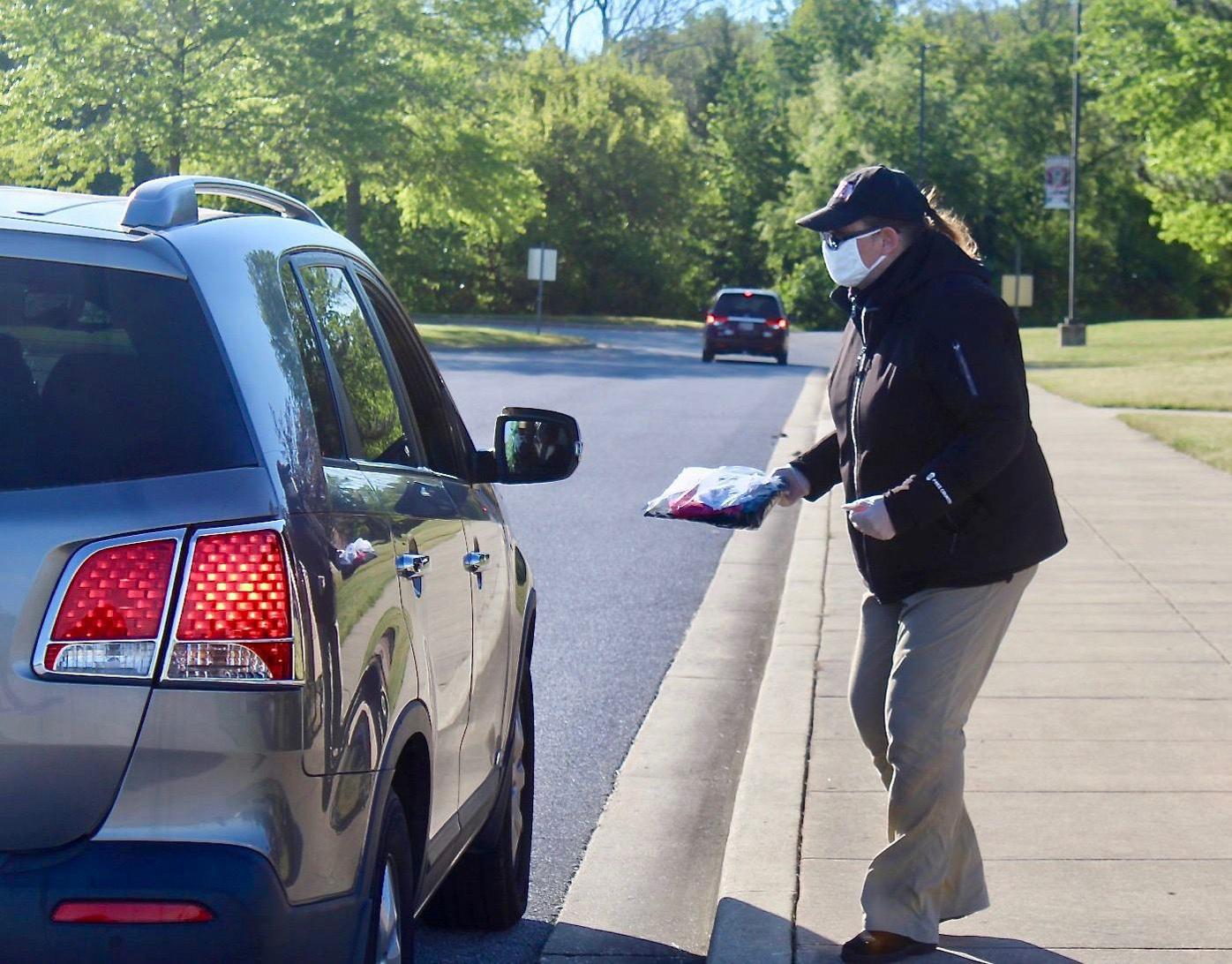 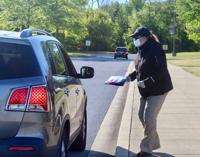 Shelly McDaniel, an assistant principal at Chopticon High School, passes out a cap-and-gown package as students and parents drove up to receive them Tuesday morning.

The graduation productions for St. Mary’s public schools are back on after the school system was told its adjusted plan did not adhere to the governor’s order.

During last week’s school board meeting, Superintendent Scott Smith said they could not move forward with planned cap and gown distributions because it was not considered essential travel. And Dr. Meena Brewster, the county’s health officer, said after looking further into the graduation plan, it was not compliant with the stay-at-home order, although she initially signed off on it.

“The process of disbursing caps and gowns was on hold until we received clarification about the manner in which we could disburse those materials. We are thankful for our partners in the health department, the sheriff’s office and the state’s attorney’s office who have worked collaboratively with us to ensure our plans can move forward,” Jeff Maher, the school system’s chief strategic officer, told The Enterprise in an email.

Smith did not respond to request for comment by press time.

Since the plans were put on hold, the cap and gown distributions were rescheduled from the first week of May to this week. The three high schools have set up times over two days for students to drive up and receive their items without leaving their cars.

Leonardtown and Great Mills high schools’ distribution starts today, May 13, and ends the following day. Chopticon’s started on Tuesday, beginning at 8 a.m. for students with last names that start with an A or B.

That morning, cars were directed to the bus parking lot where Marc Pirner, an assistant principal and principal-to-be, asked for their names and directed them to drive up to a red tent. After he said the student’s name through the handheld radio, staff grabbed the graduate’s cap and gown package and handed it to the student or parent who drove up to the curb.

Staff told The Enterprise they expected about 200 kids that day, or about half of the graduating class.

Along with the cap and gown, students could also receive their yearbook and an information packet about the College of Southern Maryland.

The rest of the graduation schedule was pushed back by about a week. According to Smith’s presentation at last Wednesday’s school board meeting and confirmed by school administration this week, the video production set up at the Dr. James A. Forrest Career and Technology Center will take place next Monday, May 18. Plans for the program for each school is due May 19, student performances must be recorded and submitted by May 20, photo montages and slide shows are due May 21 and speeches from students, principals and the superintendent are due May 22.

The adjusted plan included students being filmed, one by one, walking across the stage while not touching anything and exiting through the courtyard while the rest wait outside in their cars.

The goal is to make three films that not only include walking across the stage, but embeddings of chorus and orchestra performances as well as pictures of the seniors throughout the year. And, according to Smith, the Amish community is making personal protective equipment that will match the senior’s school colors. Each school will have someone to read the graduates’ names and the school system will coordinate transportation for those without it.

A release from the county government on Monday announced the cancellation of this year’s Project Graduation due to COVID-19. The 36-year annual event was hosted by the state’s attorney’s office that offered safe alternatives for seniors on the night of their commencements. Officials are looking at alternative ways to celebrate the 2020 graduates and promote drug and alcohol-free celebrations, according to the statement.

Graduation plans for St. Mary’s Ryken High School in Leonardtown will start next week, according to Betsy Haley, the school’s communications director. The 161 graduates can bring four guests each when they arrive by appointment to the Donnie Williams Center.

“Graduates will proceed to pick up their cap and gown, and then move into the court area of the Donnie Williams Center where a photographer will take a family photo. The graduate will proceed to the stage area where President [Rick] Wood and Principal [Catherine] Bowes will present their diploma and a graduation photo will be taken,” Haley said in an email.

She added that each ceremony will be recorded as well as speeches from the principal and president. The entire ceremony will be played on the school’s website during the week of May 26, when the original graduation ceremony was scheduled.

“We will also provide DVD copies of the ceremony and a graduation photo to each graduate. The recording will include student awards and college acceptance recognition as part of the rolling credits,” Haley said.